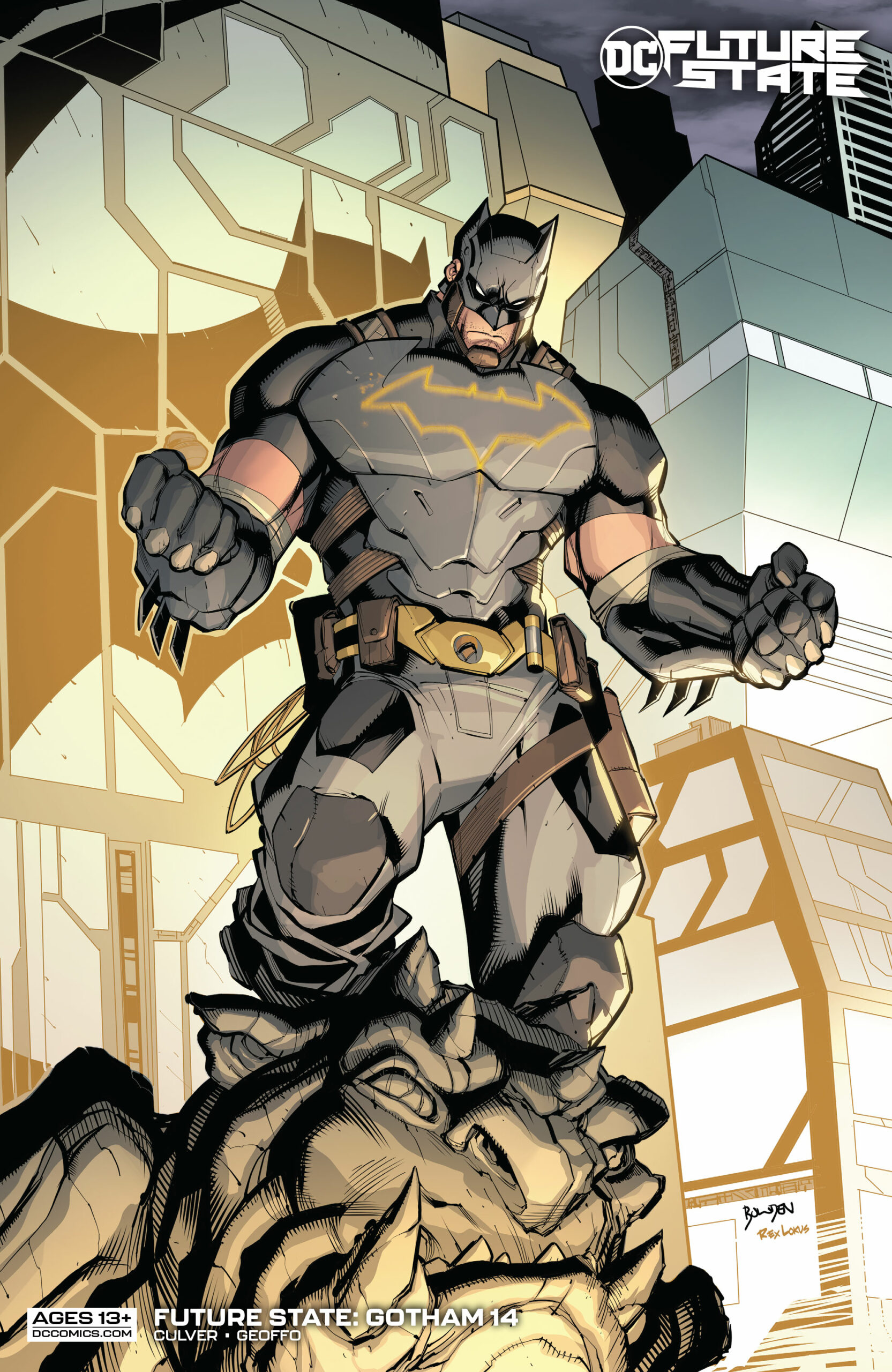 Gotham has gone crazy, I know it’s always been that way, but this is something else. The last time we checked in, Dick and Talia were going off on an adventure together, Red Hood was working with the new Batman, whilst training a Hunter, everyone was looking for Damian, and several other things, too! Let’s see if Future State Gotham #14 has any answers for us.

What. The. Actual. HECKY SPAGHETTI?!? Dennis, what are you trying to do to me? I’m only a lowly human, there was no need to go this hard. That bar of awesomeness is always raised so high with you. Culver has really thought out of the box with this issue. 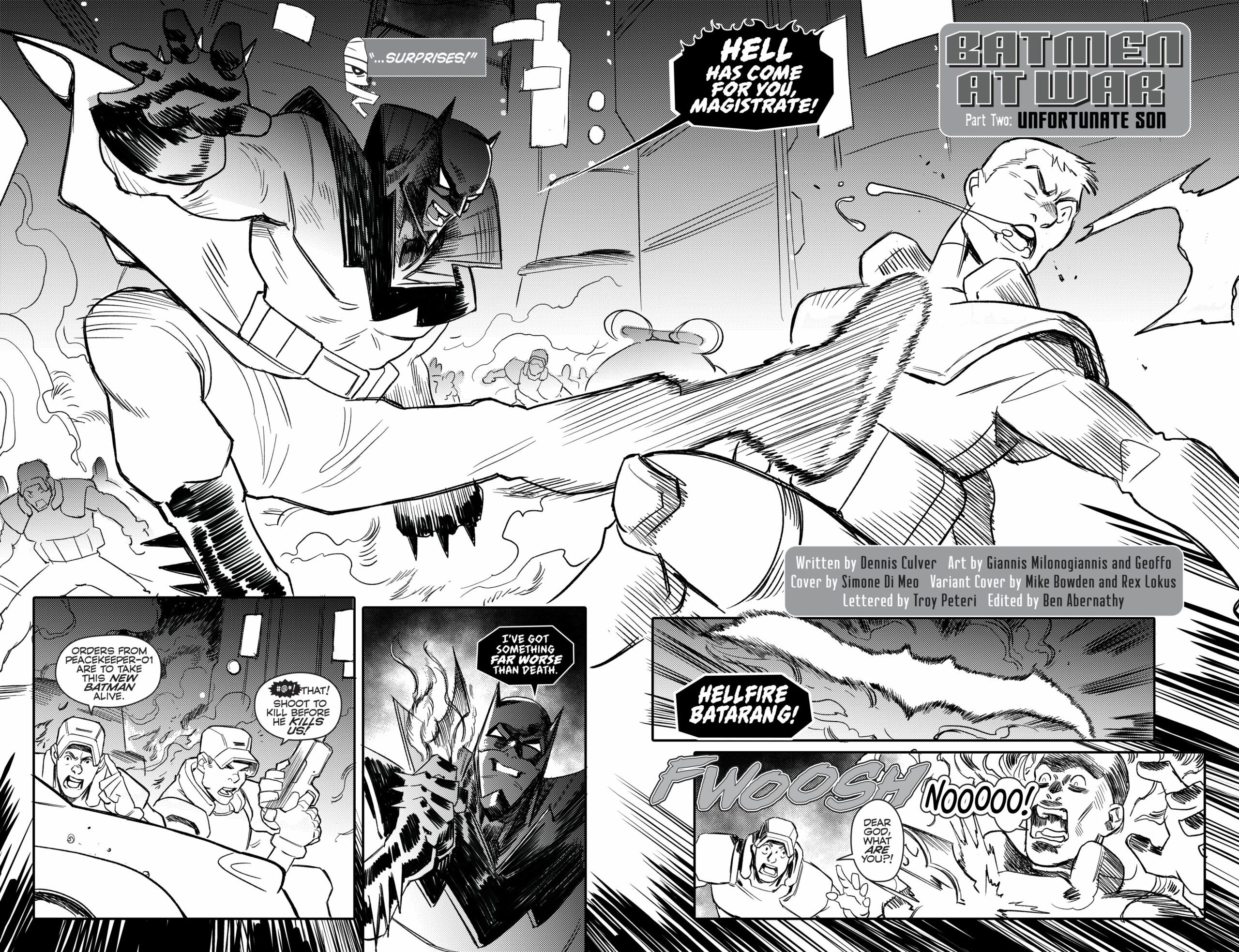 I love witnessing all the “Future State” plot lines come together, particularly as some are more insane than The Joker… new or old. There are SO many Batmen running around if you lined them all up next to each other you could probably connect one end of Gotham to the other!

Culver’s written some funny, clever, and awesome dialogue. What sticks out in this chapter is one specific exchange between the new Batman and Dick Grayson. Dennis has a knack for writing through the characters, where most people write for them. It feels like Dennis just lets them lead, and he does the rest.

There were some amazing surprises, too, and I did not see them coming. There were certain people I didn’t expect to turn up, and there were surprising exchanges between characters. I was reading this issue sitting next to my friend, who said I was making all kinds of confused, amazed, shocked faces. Apparently, it was very entertaining, both for them and for me! 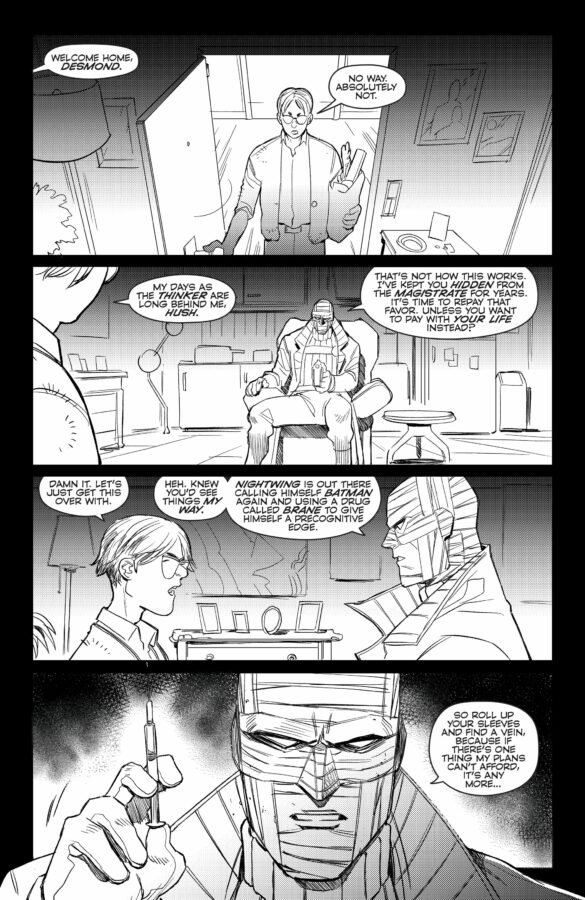 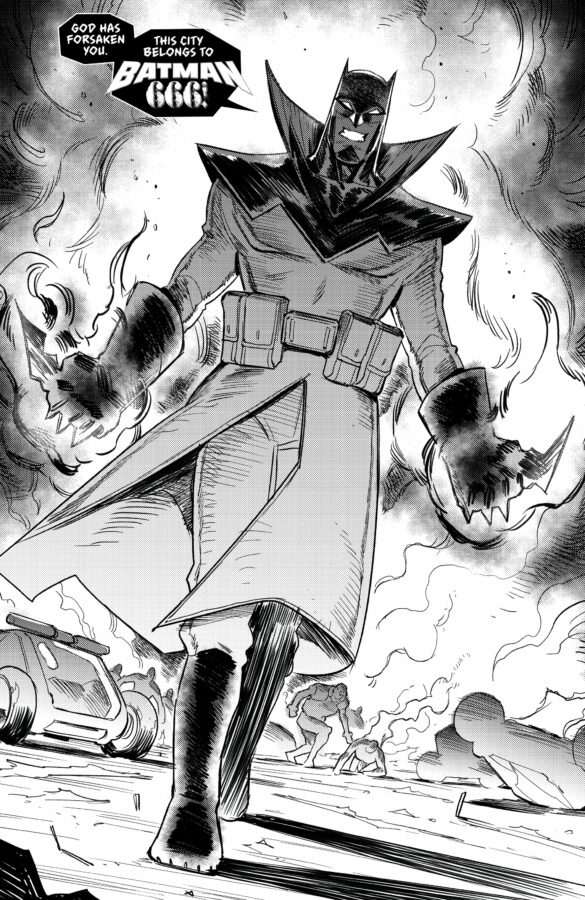 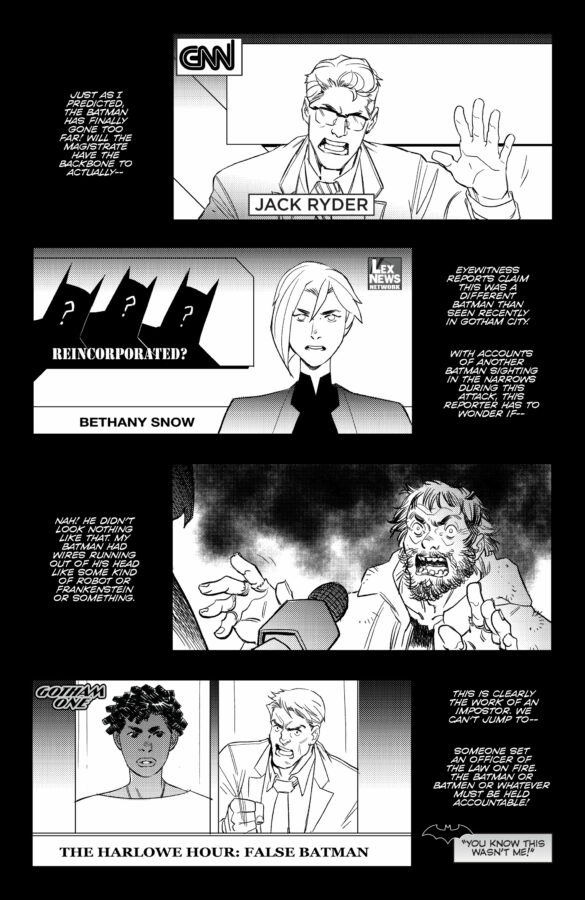 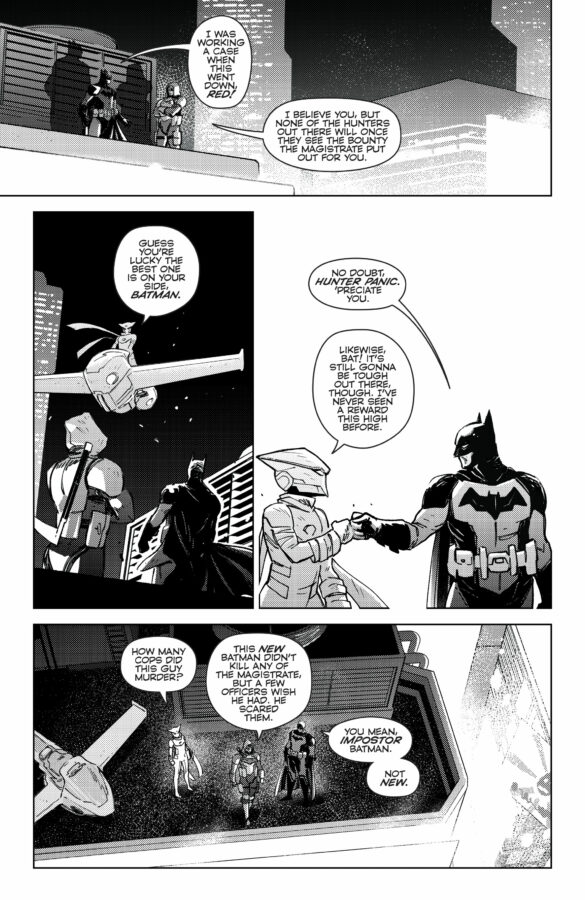 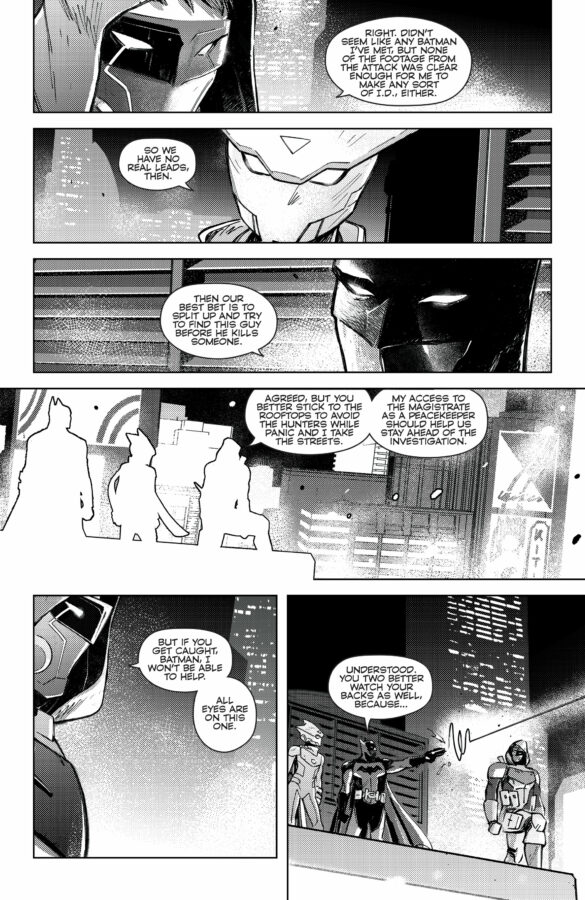 I’ve seen both artists work for over a year, I just didn’t realize they’d work so well together! Giannis Milonogiannis and Geoffo make a great team; so much so, that I couldn’t even tell where one artist ended and the other began. When you get such an amazing mash of styles that work so well together it’s Art, with a capital ‘A’.

I don’t see how people could read Future State Gotham #14 and not notice how cool it looks. The characters and backgrounds are stunning. Then, we get to the holy grail. FIGHT SCENES. Holy haymaker punch, Batmen! I wish I had popcorn. The punches hit like thunderclaps! 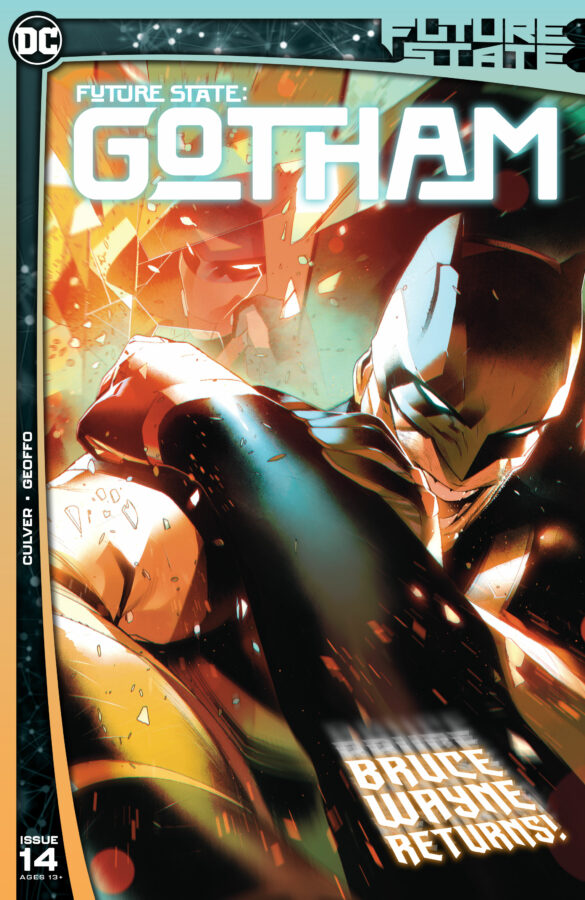 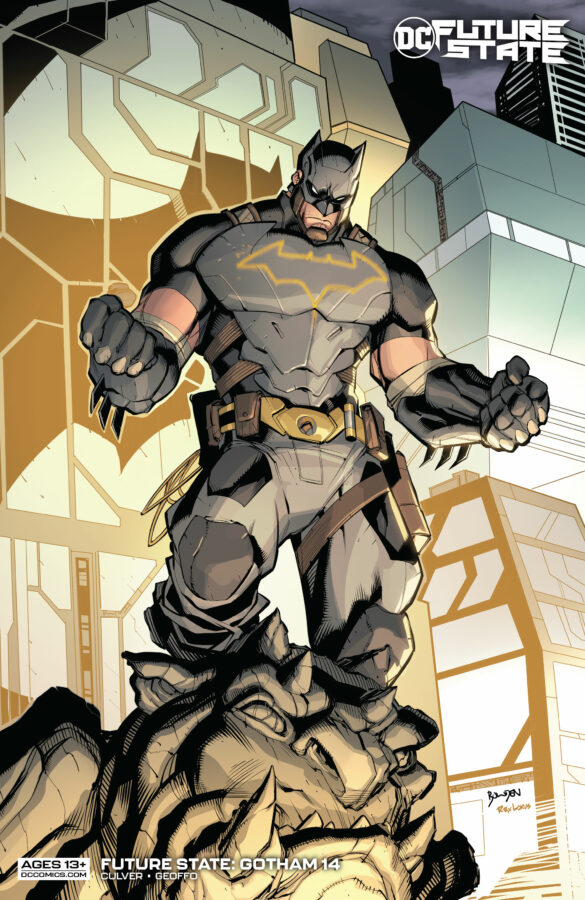 Yo! The second story at the end of the issue gives me life. It’s going to give Batman 666 a little something else too! I love the sassy one-liners Tim Seely’s added into the dialogue. This min-tale has really tugged at my heartstrings, as Seely really went in for the deep cuts. Then you have the mastery of Juan Ferreyra, who clearly has great talent, on art duties. I loved the idea of using color to tell the reader that this person has powers, without any words being necessary. That’s the definition of showing, not telling.

Where is this going? I normally just enjoy the ride. However, this is insane and I MUST KNOW MORE. I have so many questions and can not wait for them to be answered. You never want to miss an issue of Future State: Gotham, you’ll be sorry if you do.

There’s so much to take in, look at, and love about this series. It just keeps exceeding my expectaions.