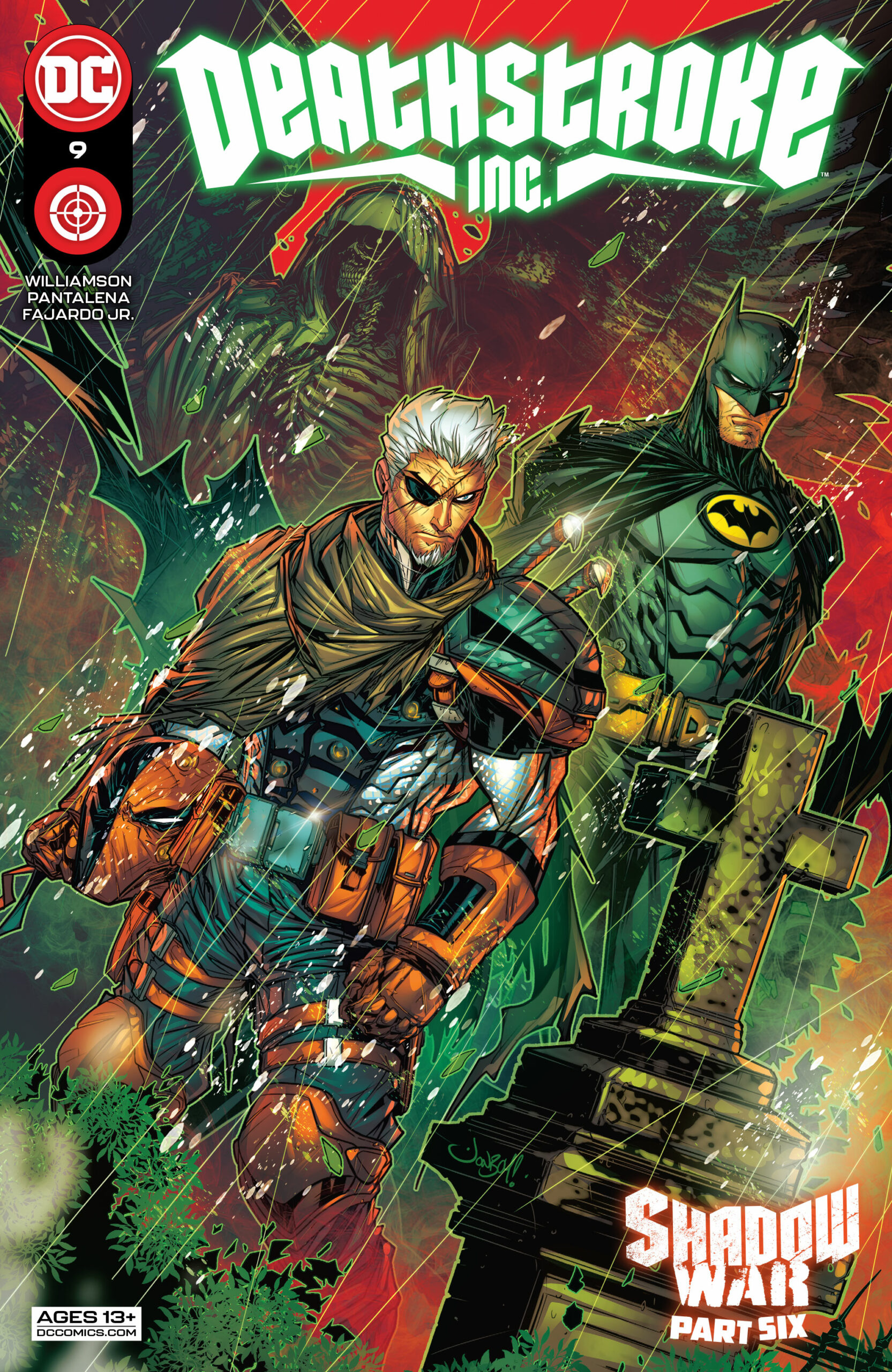 There were only two more parts in the Shadow War between the previous issue of Deathstroke Inc. and this one, but if you haven’t been keeping up, you’ve missed a lot! In our last issue, Deathstroke and his son were on the run from Talia al Ghul and her ninjas from the League of Shadows. Deathstroke Inc. #9 picks up from a different place entirely.

You’re going to want to get up to date on Robin, Batman, and all the previous”Shadow War” chapters before you read on! This crossover has been excellent, and you won’t want to be spoiled, or miss a single beat.

Not Again, Not Again

DC seems to enjoy killing young heroes. The issue opens with the confirmed death of one of our protagonists’ sidekicks. Despite the Lazarus pits no longer being a secret, there’s nothing that can be done to save the young vigilante, and his partner is left sadly saying “not again, not again”. Unfortunately, this vague description can describe both the relationships between Deathstroke and his son, Respawn, as well as Batman and his son, Robin (Damian Wayne).

Both heroes have lost sidekicks before, Deathstroke losing his sons Grant (the first Ravager) and Joseph (Jericho) and Batman losing one of his Robins, specifically Jason Todd. It’s interesting that the young always seem to pay the price for the older and more seasoned characters. This time at least, the sidekick chose to sacrifice themselves to save their father, but that doesn’t make the guilt or grief any better for the protagonists.

Unfortunately, grief makes people do things they regret, and it’s looking like the bereaved won’t feel bad about pursuing the remaining al Ghul and making her pay…

The rest of this issue is spent in pursuit of the true villains. Despite previous allegations that Talia al Ghul had arranged the death of her father so she could succeed him in his empire, there was more happening behind the scenes. Sadly, Slade no longer wants to see reason and simply aims to take out Talia. He takes back the Secret Society out from the protection of Batman Inc. before he and his team then ambush the Shadows’ headquarters in Nepal. In another part of the world (how do they all travel so fast by the way?), Batman is onto some answers.

It became obvious from the beginning of “Shadow War” that Ra’s al Ghul’s killer was not Deathstroke. The murderer wore an old costume that immediately stood out due to its pronounced collar. Current readers of Deathstroke Inc. would be able to recognize that this wasn’t Slade Wilson, not only because of his attire but also because we know that Slade has been caught up getting to know his son, Respawn. It takes time, but Batman finds the true assassin.

“Shadow War’s” antagonist doesn’t reveal his identity in this issue (you’ve got to read Robin #14 for that particular reveal), but he does answer some of our other questions. The fake Deathstroke wants revenge on both Talia al Ghul and Slade Wilson for his own reasons. He specifically murdered Ra’s in disguise to get the two grey figures at each other’s throats. Sadly, it worked, and the casualties continue throughout the arc.

Although it’s not brought up in this comic, Deathstroke’s journey throughout “Shadow War” is interesting, to say the least. He not only finds out that he has a son who was the result of a genetic experiment, but he also gets wrongly framed for a major (and kind of sloppy) assassination. While Deathstroke has a number of both crimes and acts of heroism under his belt, no one deserves to be set up, especially for something so large. To be fair, the revenge of the true antagonist seems somewhat justified, in a messy-comics-logic sort of way. All the same, Deathstroke’s ultimate fate is not true justice.

I don’t want to reveal too many details of how the “Shadow War” arc ultimately turns out, but it’s going to be weird to see how the series continues. Deathstroke’s motivations seem to have shifted again and I don’t know if anyone is going to be able to pull him back this time. It doesn’t help that he’s still the head of the Secret Society, whose members probably aren’t the best influences (and certainly aren’t the most moral). Perhaps Black Canary or Ravager will return once more to bring Slade back from the edge.

Deathstroke Inc. #9 is satisfactory for a transitional comic. While Slade Wilson was the main person of interest in “Shadow War” in many ways, this particular title hasn’t been the most prominent in telling this story. Batman and Robin are considerably more popular characters and series, but it’s still a bit disappointing to have less important details doled out to Deathstroke Inc.

“Shadow War” itself, however, is a brilliant crossover event! I finally took the time to read the whole thing and was honestly impressed with the storytelling. I still have many unanswered questions. What exactly was happening with Ra’s al Ghul and his change of heart (towards Damian, but not his other grandson)? I also wish there had been more exposition of the reveal of Respawn’s identity, especially as it pertains to Talia. Sadly, Ra’s’ secrets will go with him to the grave and I’m not sure how much we’ll see of Talia in the future.

I also wonder if we’ll see Deathstroke, Batman, and Robin encounter one another in this way again. The crossover was amazing, but I do want more Slade Wilson-centered stories for his series. Now that “Shadow War” is over, I’m sure we’ll be back to Deathstroke the Terminator in no time.