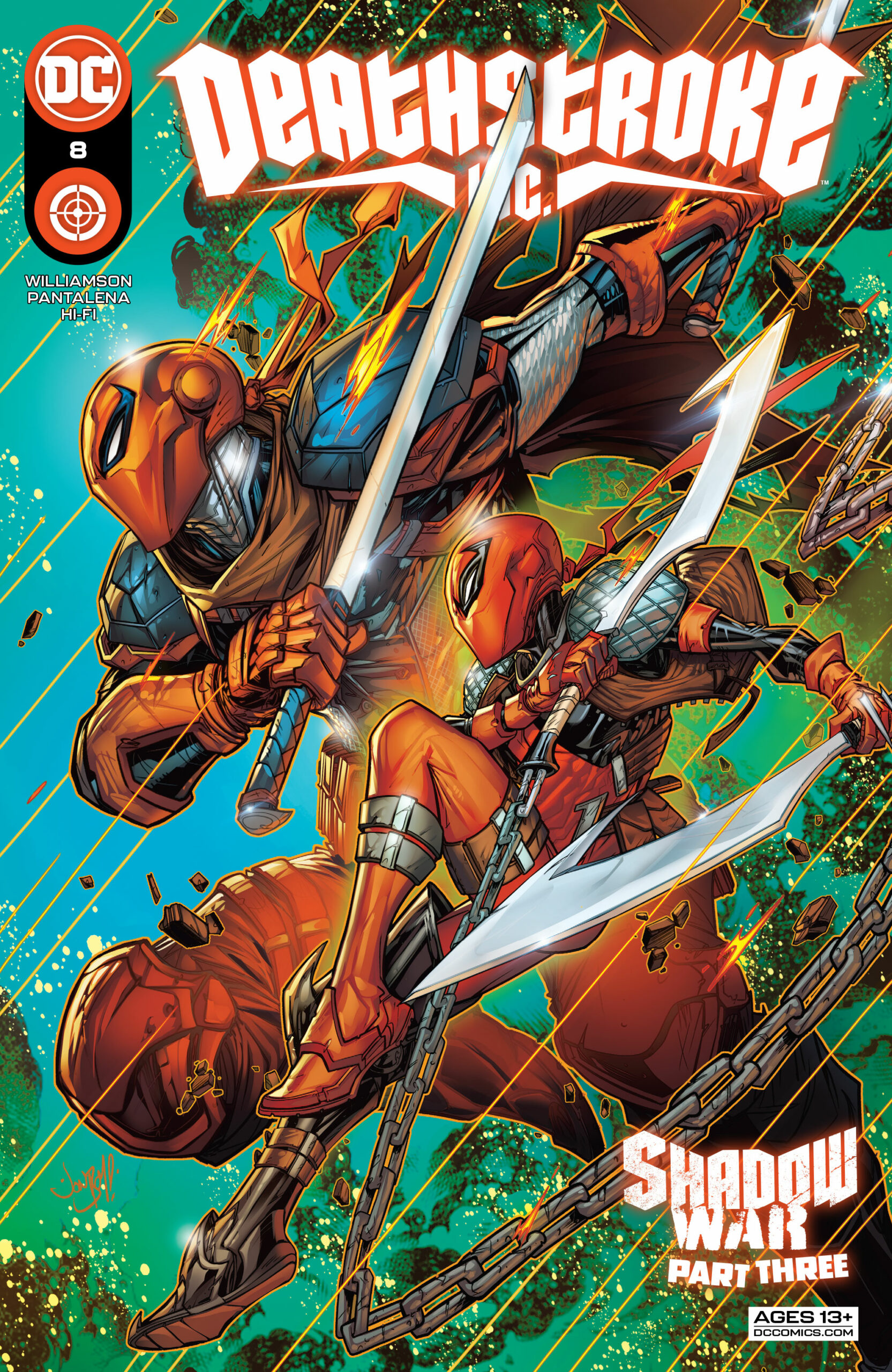 I can honestly say that I was incredibly lost trying to read this issue! When we last left our heroes, Deathstroke had just been reunited with his “son” Respawn and the two were discussing their backgrounds. They ditched Ravager (Rose Wilson) to pursue their less than good-intentioned interests. Deathstroke Inc. #8 starts in a completely different part of the story. Respawn and Deathstroke are now on the run, but from who?

We recommend getting caught up on Robin and Batman before you read this review. Shadow War is messy, but you don’t want to miss it!

And Now for Something Completely Different

If you were hoping to learn more about Deathstroke and his time as king of the villains, Deathstroke Inc. #8 is not the issue with answers. Instead, the series takes a hard left into unknown territory. Plain-clothed Slade and Respawn hunker down in one of Deathstroke’s secret hideouts.

Ra’s Al Ghul murder has left the League of Shadows reeling. Talia, Ra’s daughter, after finding evidence showing that the culprit is Deathstroke is out for blood. This leaves “father and son” with no choice but to seek shelter and veer off into another storyline.

For the first time in this series, the Dark Knight arrives. I know this is kind of a spoiler, but seeing Batman himself in Deathstroke Inc. is pretty fantastic! Bruce arrives on the scene to stop Talia from continuing to torture, maim, and kill those who are protecting Deathstroke and, by extension, Respawn. Unsurprisingly, Bruce’s pleas pretty much fall on deaf ears. Talia has a one-track mind, especially as the daughter of a murdered villain.

What’s also great to see in this issue is Paolo Pantalena’s versions of Damian’s star-crossed parents. Pantalena’s style combined with Romulo Fajardo, Jr.’s colors creates a gripping texture, especially in the first panel showing the two. Both seem young, which is odd considering their son is a mature crime-fighter himself. What also comes through in the scenes the former lovers share and the art that depicts them is the juxtaposition of their differing virtues. 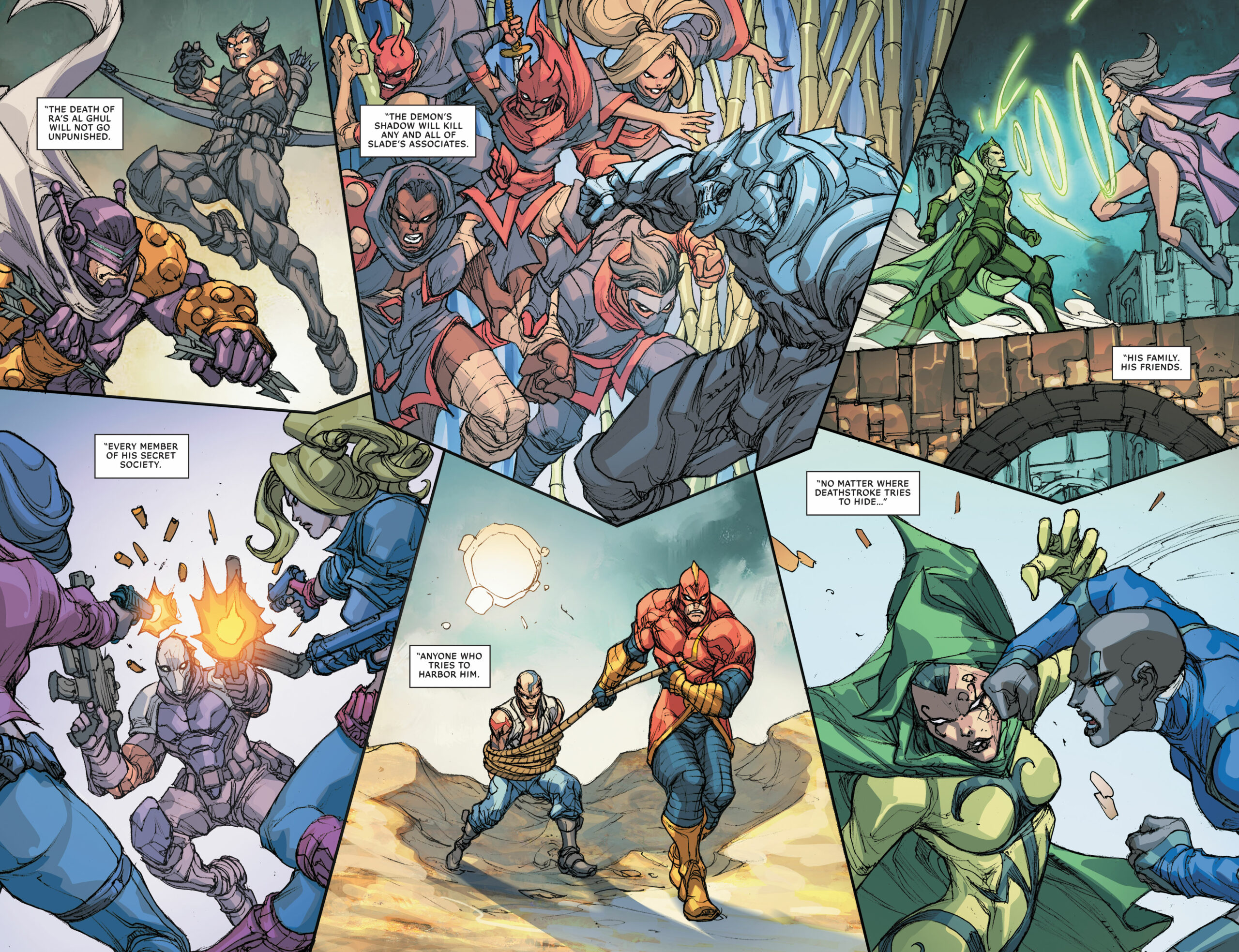 Bruce is often portrayed as an idealist who won’t kill, and it’s absolutely true in this outing. The entire idea of Batman is to show that there are other ways to prevent crime from happening besides more violence. Talia is of a different mindset, of course. You’d think that the two now share losing their fathers to murder that they’d be able to see each other’s points of view. Alas, it will never be easy for a vigilante hero and a questionable villain to connect.

While this issue had some fascinating characters and appealed to a larger and more interesting storyline, even though it will feel disjointed for those not following the crossover. Unfortunately, this largely stemmed from the takeover of the story from Deathstroke’s descent into villainy and madness into something more related to other characters. Because there were so many heroes and villains to squeeze onto the pages, there wasn’t enough time for exposition or even brief introductions. Both major storylines for the issue were separated hugely. Neither set of characters from either side ever interacted with each other.

Batman fights to protect Deathstroke from Talia’s vengeful bloodlust, but we don’t get to see any results from that playing out in this issue. Mostly, the stories end up being so mismatched together that this almost doesn’t even qualify as an independent issue. It’s more of the second act of “Shadow War” than anything and that doesn’t work in this comic’s context. Perhaps another crossover in the future could yield different results.

I know I’m usually a somewhat positive person when I write these reviews, but I was honestly bored by this issue. The ideas of “Shadow War” are great but are portrayed a bit too dully and spread out too far for someone like myself who doesn’t have time to be reading lots of comics every week. For those following the whole story, it may be absolutely fantastic. The best part of the issue was the appearances of Batman and other heroes and they aren’t even the titular characters of this series! Crossovers are fun, but it felt like a lot for this month’s issue and overall felt like it belonged in a different series or a spinoff.

Deathstroke Inc. #8 was neither good nor bad, but it was absolutely just a crossover issue, both for the series and the “Shadow War” arc. I can’t believe I’m writing it, but I miss the storyline about Slade Wilson kind of going off the deep end and creating his own villainous cooperative. Hopefully, we’ll be back to our regularly scheduled Deathstroke shenanigans in the next issue.