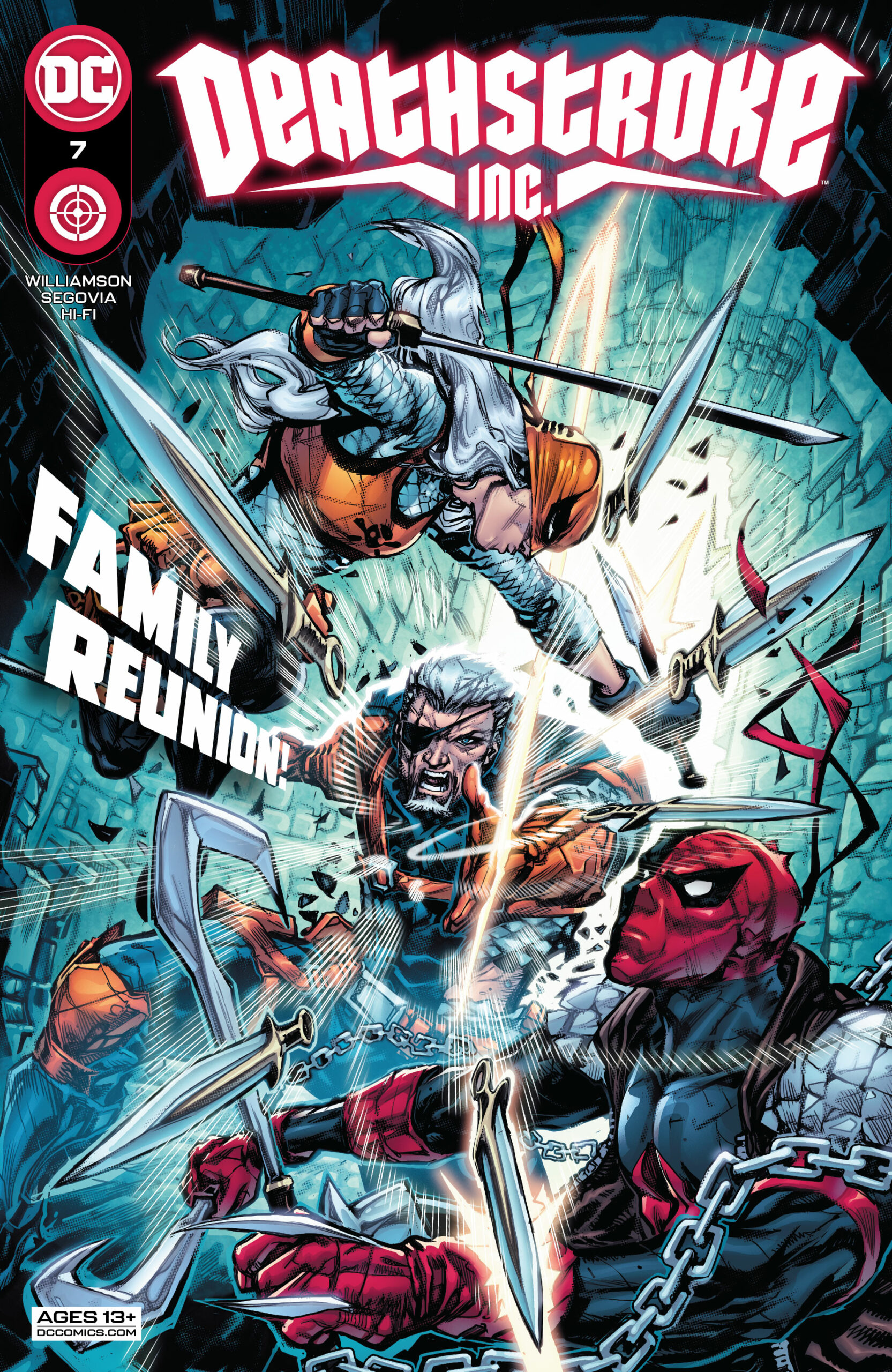 The last issue left off with another grand cliffhanger. Two junior Deathstrokes appeared, and while I had some suspicions of who those characters were, I was only half right. Deathstroke, Inc. #7 brings some new concepts into play, but you’ve gotta have good comic knowledge to fully unpack it all.

Luckily, I did some research, so I’m ready to share!

Series-level spoilers lie ahead, so feel free to read previous reviews of the series to get caught up.

Deathstroke’s proteges are shown sneaking through the Secret Society’s headquarters. Slade’s clearly made a lot of progress in amassing an army in a short amount of time. Unfortunately, his daughter, Rose, must not have been good at sneaking home late when she was a teen because her father catches her and her companion pretty quickly. Yes, my wish came true and Rose has finally officially appeared in Deathstroke, Inc!

As Rose confronts her father, Deathstroke’s sole focus is his daughter’s ally. The other mini-Deathstroke wears the costume of the original Ravager (Grant Wilson) but with some red on it. He has the same build as Damian Wayne, so Slade accuses the newcomer of being Robin before tearing off the boy’s mask to reveal a shocking head of white hair.

Slade, Rose, and the boy Respawn (see the brilliant Robin ongoing series), all have the same sheen of hair. While it seemed that Deathstroke’s follicle coloration was due to age, there’s more likely a genetic reason for it. The only problem? Respawn and Deathstroke appear related but have never met. So who is this mysterious boy? Read the issue to find out!

Are You Sure That’s Not Deadpool?

From his first appearance in the last issue, Respawn has resembled the merc with a mouth to an astonishing degree in my mind. Respawn’s costume is more of a combination between Deadpool and Deathstroke, but it’s shocking all the same. There have been a few jokes in DC’s pages about the resemblance between the characters, but I’m still surprised it was legal! Of course, Deadpool was Marvel’s tongue-in-cheek Deathstroke spoof anyhow, so turnabout is fair play.

Respawn also seems to have Slade’s regenerative powers, perhaps to an even greater degree than Deathstroke himself. This was due to the genetic engineering that created the boy. The reason why Respawn so greatly resembles Damian Wayne, the son of Bruce Wayne and Talia Al Ghul, is also revealed in this issue.

There Can Only Be One

Rose Wilson was all over this issue and it made me so happy! While she seemed a tad bit more emotional than you’d expect a superhero to be, Ravager’s situation was understandable since her father seems to have gone far off the deep end. What was disappointing about her appearance, however, was that Black Canary has somehow disappeared. I know Dinah’s off trying to get the Justice League or some do-good group together to oppose Deathstroke, but this is one of my biggest comics peeves.

There are plenty of female comic characters in both the Marvel and DC canons, but unless an issue is specifically about girl power or something else on the nose, there are rarely ever two active female characters in a single issue. Even when you do get two badass women together, they’re usually on opposing sides. The storyline of this comic presents a great opportunity for Ravager and Black Canary to smack some sense into Deathstroke together. As a woman who loves comics, I just want to see more representation, sometimes even if it’s tacky or distasteful.

Seeing as it’s 2022, you’d think we’d be past the single woman in a comic book problem, but I guess I’ll just continue to be disappointed. Hopefully, the women in Slade Wilson’s life will have an opportunity to come together and get him to change his ways.

There was a lot of DC canon called into play in Deathstroke, Inc. #7. I definitely had to do some extra research (and privately thank Christopher Nolan in my mind) in order to understand all the new plot points and characters that were brought up. This issue was interesting but seemed to pull away from the ultimate plot and overarching story that’s so far been established.

This issue once again seemed to be a transitional piece but had a bit more substance than #6. The inclusion of the Wilson kids has added some great new dynamics to the story, but again, I don’t know that they’re going to sway him to the side of good. The epilogue of this issue promises more intrigue with an appearance by a surprising adversary and his cohorts.

Slade had mentioned seeing a dark vision of the future. I’m not sure if the villains from the closing pages of this chapter are the threat he saw, and only time will tell what will become of Deathstroke’s fears.