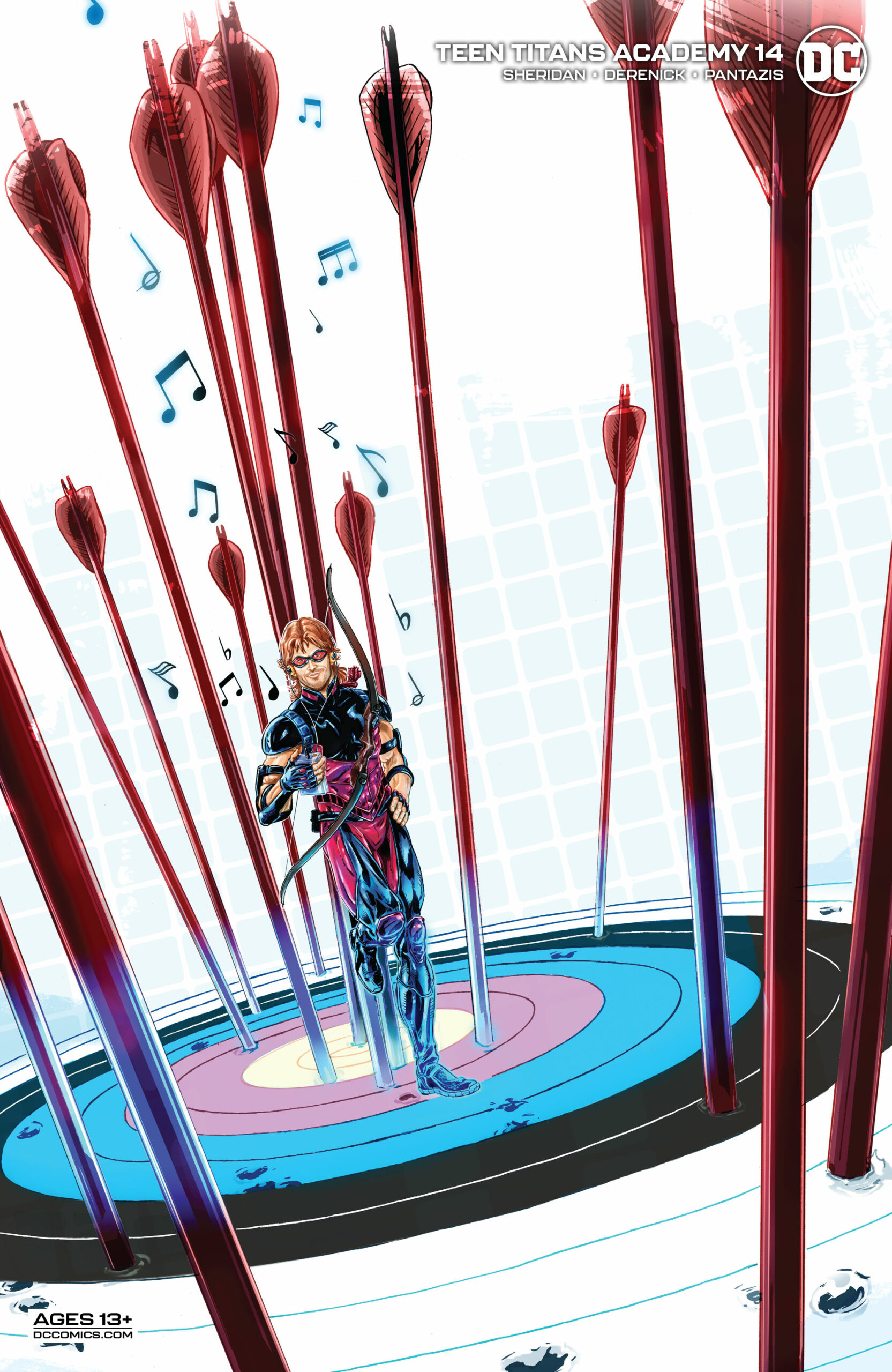 It’s a fresh start for the students and staff, in Teen Titans Academy #14. As classes resume in the newly-rechristened “Titans Academy”, two faculty members navigate the awkwardness of a new relationship, and one student, on a dangerous training mission, must finally face the mysterious past that’s haunted him his entire life…

Sadly, this is the penultimate issue of Tim Sheridan’s title, which will end next month with issue #15. While we don’t know why DC canceled the book, I’m guessing that it may have something to do with this summer’s Dark Crisis event. I expect that the original Titans are going to figure prominently in this crossover and they may well be seeing major changes in their status quo. Perhaps some of them might even be members of the next incarnation of the Justice League.

I also get the feeling that Sheridan found out about the cancellation rather abruptly, and is trying to wrap up dangling storylines, or at least leave them at a place where it will be easier for him or another writer to follow up on them later.

One of these dangling threads is the merging of Changeling and Cyborg into a single body, which is revealed in this issue. This was first hinted at in Future State: Teen Titans. While it appears that the timeline we saw in “Future State” has been averted elsewhere in the DC titles, many events we’ve witnessed in this title seem to be leading our heroes towards that future.

Personally, I have mixed feelings about this development. It’s a fascinating idea, and Sheridan’s doing a great job of exploring the emotional toll it’s taking on both to adjust to this development. However, with the title ending so abruptly, I fear that the writer won’t get time to fully develop this storyline.

Also, while it makes an interesting story, I don’t really want to see this as a permanent change for the characters. If they’re still in this state when the title ends, how long will they remain in this merged state before they’re restored to their separate selves? If neither appears in whatever Titans title comes after Dark Crisis, they might be stuck like this for quite a while.

We also see Stitch and some of the Freshman class set off on an unauthorized mission to help Nevermore, Shazam, and the teenage Black Adam. Instead of arriving at the Rock of Eternity, however, they meet up with Dane and Adam on Apokolips. I wonder if this is going to lead to a final wrap-up of the storyline that has kept Billy and the others in Hell. Also, what impact will this have on the upcoming miniseries featuring Mary Marvel – or is that Mary Shazam?

Fittingly, Teen Titans Academy #14 issue opens with the graduation of upperclassmen Kid Flash, Roundhouse, and Red Arrow. I wonder what that means for the characters? Do they now join the faculty, go off on their own, or are they still part of a Titans team? I guess a lot of that will be determined after the fallout from Dark Crisis is settled and the new status quo for the Titans and the Academy is revealed.

One minor quibble, but the solicitation refers to the Academy as the “newly rechristened Titans Academy”. However, during the graduation ceremony, Starfire declares the name to still be “the Roy Harper Titans Academy”. So, it seems that Sheridan had a change of mind before completing the story.

Personally, I don’t really mind that the school’s name hasn’t changed, as it leads to an interesting exchange when Roy expresses his surprise at the name not having changed. Donna answers:

I like it and our lawyers say you’re still legally dead.

Roy’s response is just to reply:

Only on the inside.

This kind of banter shows the friendship and love that exists between the original Titans and proves that Sheridan understands this crucial element of any Titans title.

With only one issue to go, I wonder if Sheridan will be able to satisfactorily conclude his overarching storyline. It’s almost certain that some plotlines will be left hanging. So, I hope that Sheridan will be able to continue his story in some form post-Dark Crisis. Teen Titans Academy #14 did deliver some interesting developments and set up the next issue’s finale as an exciting conclusion to the series.