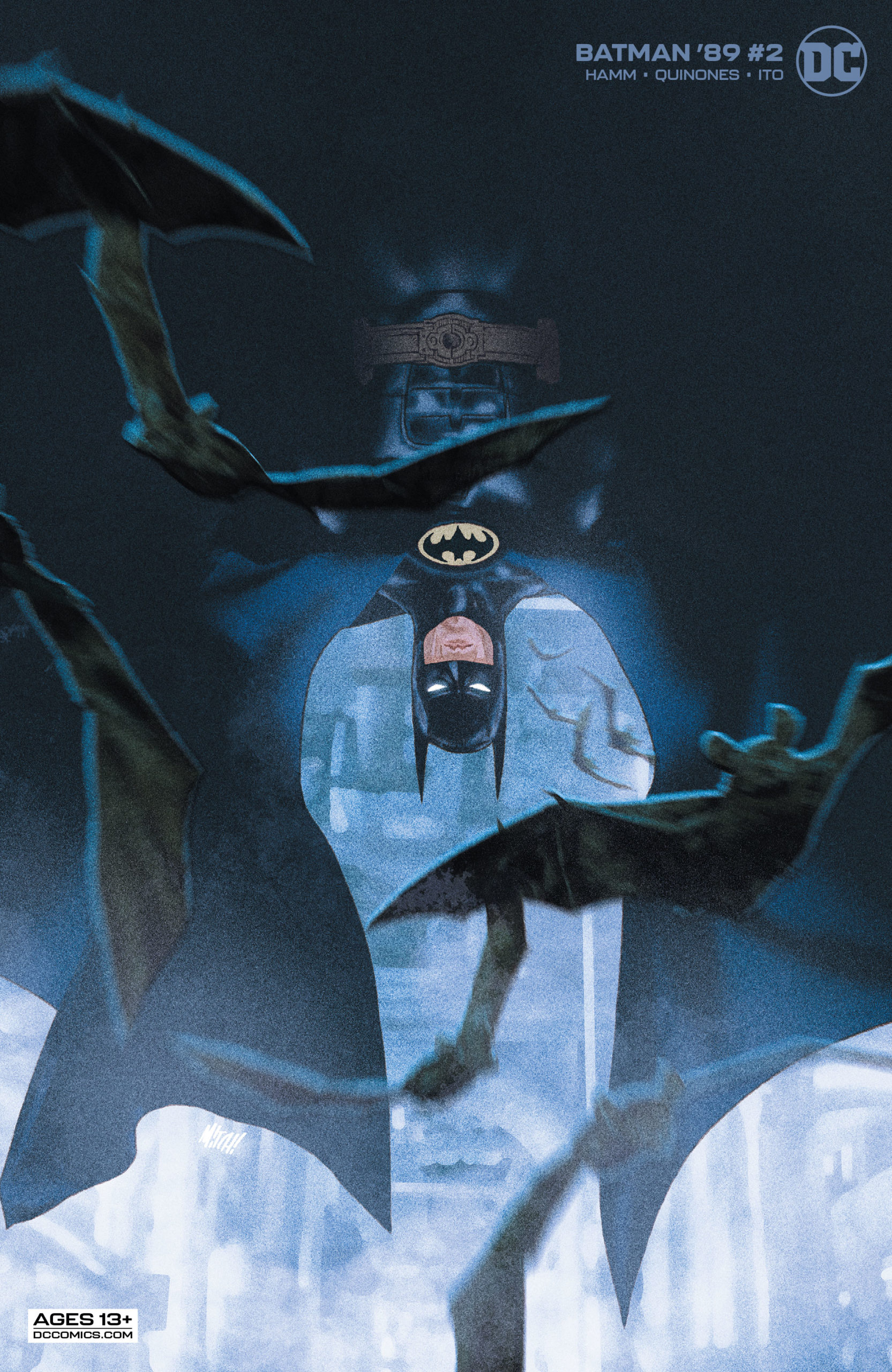 Last month, I entered Batman ’89 with nostalgia goggles on; though I don’t believe that actually affected my thoughts on the book. Going into the second issue for this series, I wanted to take those goggles off and see if the series still holds up. Does the goodwill given to last month’s issue stand firm, or does Batman ’89 #2 go off the rails? Spoilers, it mostly holds up.

Batman ’89 #2 picks up immediately where last month’s issue leaves off. In the panels and pages that follow, a familiar theme’s painted – Batman/Bruce Wayne is witness to yet another child becoming an orphan. It’s a theme that tends to lead to that orphan being cared for by Bruce and later becoming his sidekick, Robin, though that’s not quite the case in this scenario, it doesn’t stop guilt from building up within The Dark Knight. The scene ends with a grief-stricken Batman, maskless in the Batcave.

That’s most of what we get to see from Bruce Wayne and/or Batman in this issue. The titular hero pops up as his alter ego once or twice more, but Batman ’89 #2 puts its focus on the character that will go on to be Robin and, like last month, Harvey Dent. While it’s odd to not feature the titular character in a comic, it’s a bit baffling when it’s a limited series of 6 issues. That said, this creative team doesn’t waste its moments with the story they’re telling sans Batman.

The series is set sometime after 1989, but before the present day, and echoes problems that have existed for quite some time, but have taken up a new light in the last year or so. it feels like here are two Gotham Cities that are part of the theme in Batman ’89 #2. Those of the rich and those of the forgotten, and it’s these people that Harvey’s trying to help. This works well because he’s a man that straddles both worlds; born in Burnside but also the current DA and potential Governor.

I’m a big fan of comic books or TV shows that attempt to say something important with their stories. It’s a way to help get an important message across that some audiences may not be getting elsewhere. Batman ’89 #2 pays tribute to the source material while getting into some meaty storytelling. It’s just a shame that the Caped Crusader is barely part of it. As I mentioned above, that doesn’t mean I’m not a fan of what Sam Hamm is trying to don it’s just now that we’re 1/3 of the way through the series, it’s shocking how little Batman we’ve actually had.

Hamm’s once again writing a story that very much feels like it belongs in the world of Batman and Batman Returns. While his writing for Bruce and Batman can be hit or miss with Michael Keaton’s performance, but he’s nailing Billy Dee Williams as Harvey Dent. To that end, and it may be too soon to tell, but when he brings Catwoman into the story, I do get a sense of Michelle Pfeiffer on the page. Between Catwoman and the final panel of Batman ’89 #2, I’m very excited to see where Hamm will take us next month.

Joe Quinones and Leonardo Ito continue to deliver in the art and colors department. Quinones just captures that feel of the movies while Ito’s colors feel dated but in a good way. The final pages in particular really stand out with Ito’s work.

While I wish there was more Batman in Batman ’89 #2, Sam Hamm’s taking the time to flesh out this universe’s version of Two-Face and I’m here for it. Being able to read this series and have it feel like a logical next step after Batman Returns continues to impress.

Babs, Cass, and Stephanie to Star in ‘Batgirls’ Monthly