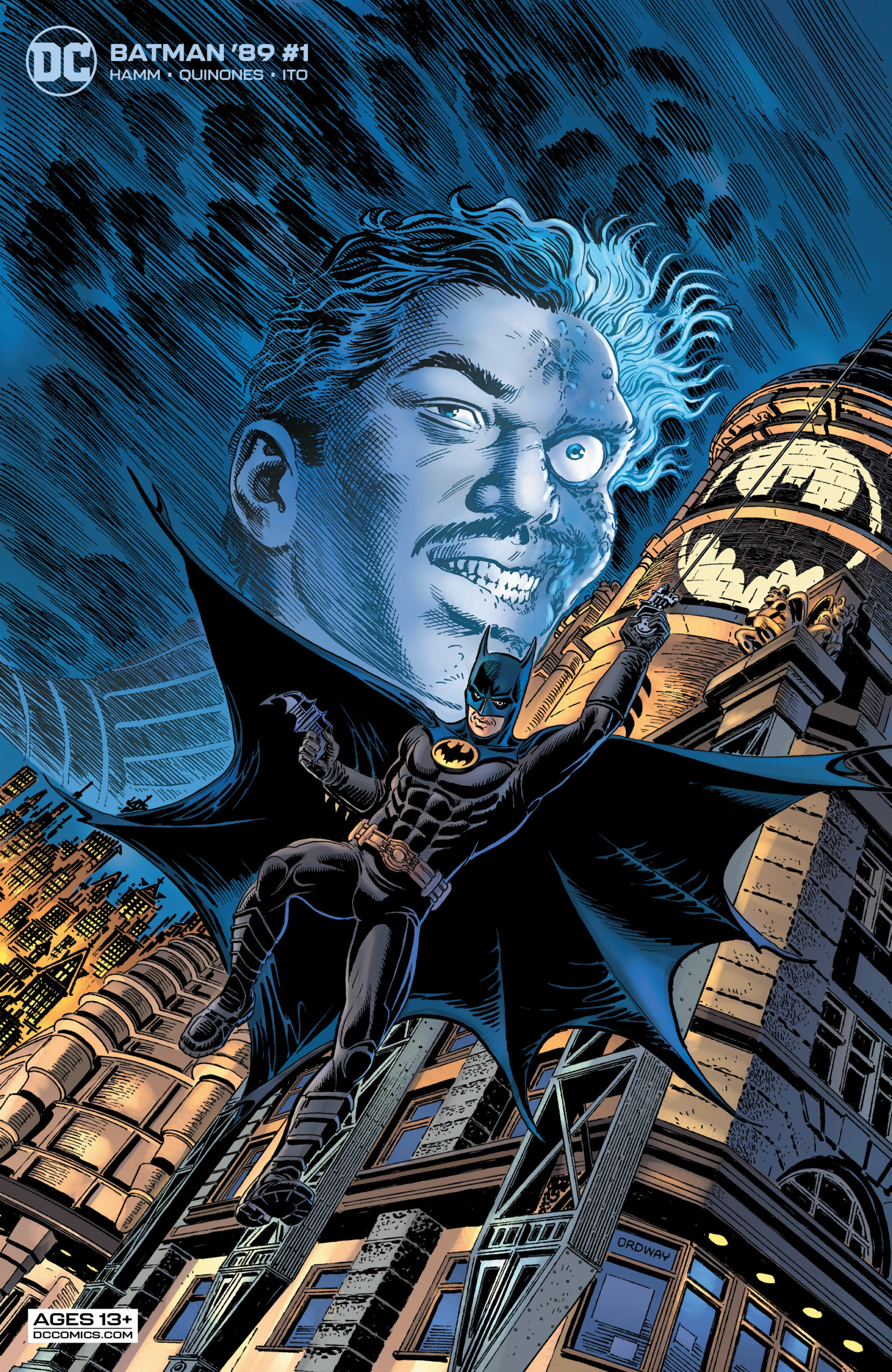 While my first exposure to Batman was Batman ’66, thanks to my my father, my true love for The Dark Knight was born the moment I saw Tim Burton’s Batman. I’ve loved that movie for so long, and seen it so many times, that I couldn’t even tell you when was the first. I was so young that it all blends together at this point. The point being, the only thing I bleed as much as I do Eagles green is Batman ’89 black & yellow. To be a fan of this incarnation of Batman in 2021 is akin to hitting the lottery. Only in my wildest dreams did I ever imagine that we’d get to see Michael Keaton as an older Bruce Wayne/Batman, and now a Batman and Batman Returns sequel comic written by the man who scripted the original film? Batman ’89 #1 is here! What a time to be alive.

My love of Batman ’89 aside, what Burton and his team brought to life wasn’t just Batman, the Joker, and more, but they made Gotham City a character; that world was full of potential stories yet to be told. Now they can be, thanks to Sam Hamm. He knows the world just as well, if not better than, Burton. Any worry one may have about what Batman ’89 #1 may be is washed away from the opening page. You’re instantly pulled into another chapter of the story that started 32 years ago. Seeing Billy Dee Williams as Harvey Dent, and being able to hear his voice while reading his dialogue, is a treasure.

Taking place on Halloween, and the day after, the story sets up what feels like could have been Burton’s third movie. Dent is on a crusade against Batman and James Gordon. He’s not necessarily the White Knight that he’s been painted as from other incarnations, but he is showing early signs of his Two-Face persona. Outside of the Harvey Dent of it all, some interesting plot points remind me of The Dark Knight – citizens inspired by Batman to wear his cowl and crest to protect Gotham while Joker’s influence has inspired criminals to wear purple, or to dress like clowns.

My only real complaint is that this book is a little light on Batman himself, but soaking in that Billy Dee charm does go a long way towards making up for it. With Batman Forever featuring Two-Face as one of the villains, it’s nice to see where a potential third Tim Burton film may have gone, but using Billy Dee Williams as the villain. Who knows, with Flashpoint coming to the DCEU, maybe we’ll even get to see it in live-action one day.

Burton’s Batman universe has a distinct feel to it. Having Sam Hamm come onboard as the writer for this mini-series helps tremendously to capture the sound of that universe. When reading these pages, a reader clearly can hear Michael Keaton, Billy Dee, and Michael Gough as part of the scenes. To be honest, Hamm (and the entire creative team) have the benefit of nostalgia for this first issue for sure, so I’m hoping that the rest of the series not just continues the successes of Batman ’89 #1, but builds on them.

Joe Quinones, who has been shepherding this continuation since sometime in 2015, and color artist Leonardo Ito do a wonderful job at visually presenting the Burton-verse. Once again, it does feel like I’m watching Keaton, Williams, and Gough step into these roles once more. There is some liberty taken with Commissioner Gordon – he looks like a cross between Pat Hingle and Gordon from Batman: The Animated Series… but I love it, especially since Harvey Bullock is brought into this universe and has HUGE BTAS vibes. The nods to other Burton films that these artists work into the background are extremely good too. I’m looking forward to their takes on both established characters in the Burton-verse and those that will make their debut in this mini-series.

Batman ’89 #1 has a big benefit of nostalgia, especially at a time where we know that Michael Keaton is returning to the role in The Flash, to lift this comic up. However, the creative team doesn’t fully rely on that nostalgia to deliver this must-read issue, they present us with what feels like could be the logical third Batman movie from Tim Burton.