Enough time has gone by where the events of the last episode are no longer a spoiler, but they will be referenced in this review and those events are pretty big. If you’re not caught up on Titans, take some time and get caught up before continuing to read.

“Blackfire”, the fourth episode of Titans Season 3, is largely a direct response to the death of Hank Hall AKA Hawk. There’s fallout for the team that takes some of the members on different paths. While Hank may never have been the glue that held the Titans together, his loss certainly leaves a dark cloud looming over the rest of the gang.

The start of the season showed a Titans team that was a well-oiled machine. They worked together and got the job done. Since dealing with Red Hood, the Titans have failed. Not for lack of working together, but for playing into Red Hood’s hands. In this game of chess, he’s proven to be steps ahead of Dick Grayson and the rest of the team. Red Hood, also known as the Titans’ former teammate Jason Todd, can predict what each member of the team is going to do. He knew that Dick, Hank, and most of the team would do anything they could to save their friend. Jason also knew that Dawn Granger, AKA Dove, the woman that loved Hank and whom the fallen hero was desperately trying to win back, would do anything to save Hawk. Even pull a trigger…

That’s where Titans 3.04 starts, with the team dealing with that failure. Dick and Gar seem to be the two Titans that are holding up in the face of this tough loss. Conner Kent, AKA Superboy, is taking Hank’s loss as his own failure. Comparing himself to Superman and feeling like the team has been waiting for the Lex Luthor side of his genetic makeup to be revealed, Gar attempts to assure Conner that’s not the case, but to no avail. Dawn does walk in on Conner’s outburst and comforts him. She explains it isn’t his fault and that she places blame on herself… she let Red Hood trick her into detonating the EKG bomb.

You were just a boy. Those were the lessons that he taught you. It’s not your fault, but you need to make sure this doesn’t happen to someone else. That it stops with you. Now you let Gotham take care of Gotham. The water will find its level. Stop trying to prove something here.

Since Jonathan Crane’s (AKA Scarecrow) debut on Titans, there’s been some intrigue to the character. He’s portrayed very differently to how we’ve seen him in past interpretations. That’s not a bad thing, as I’ve been very interested in his involvement in the series thus far. After this episode, it’s clear that Scarecrow will begin to play a larger role further down the line.

After Red Hood put out a hit on Crane, they plan to move the villain to Blackgate Penitentiary. During the transfer, Dick intervenes and takes Crane into his personal custody. During their conversations, it’s very clear that Crane knows more than he should and Dick has (likely before taking Crane into his custody) figured out that Scarecrow is working with Red Hood.  Further, the doctor of fear later reveals this he “rebuilt” Jason after what happened with the Titans in San Francisco.

There’s some very interesting and rich dialogue between Nightwing and Scarecrow that ultimately leads to a showdown between the two former Robins. The fight between Nightwing and Red Hood is everything you want it to be, and it pulls at your heartstrings; Dick is legitimately upset that Jason betrayed the Bat-family. It’s also one of the best, if not the best, fight scenes the show has had. It’s fast, but each moment counts. 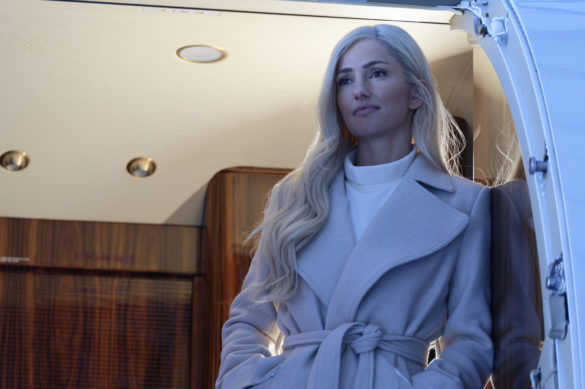 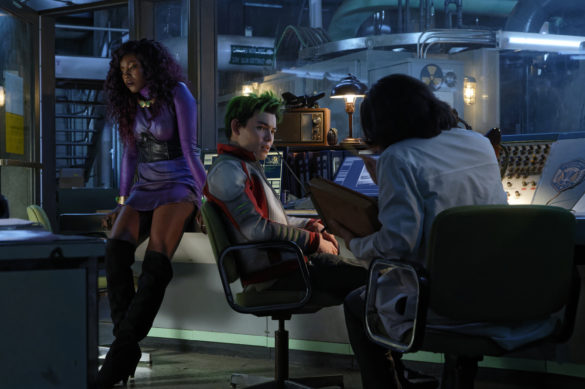 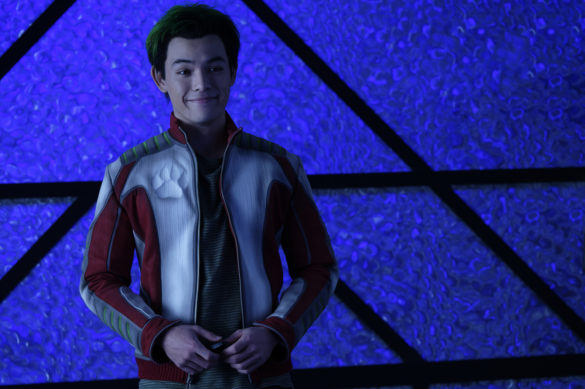 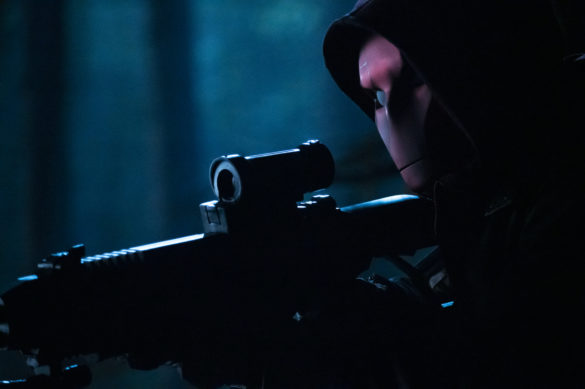 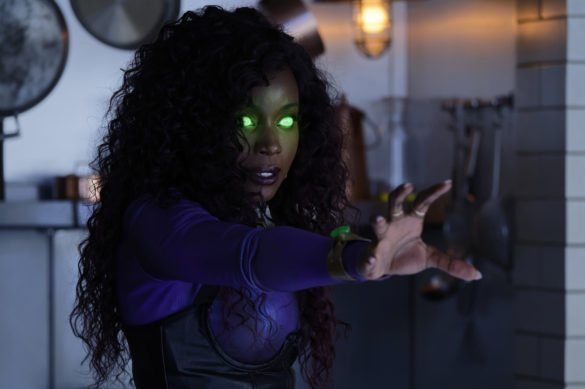 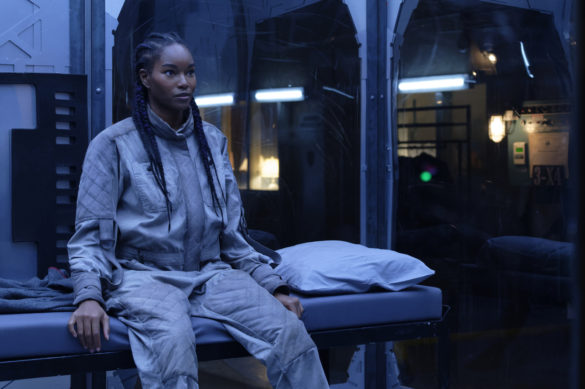 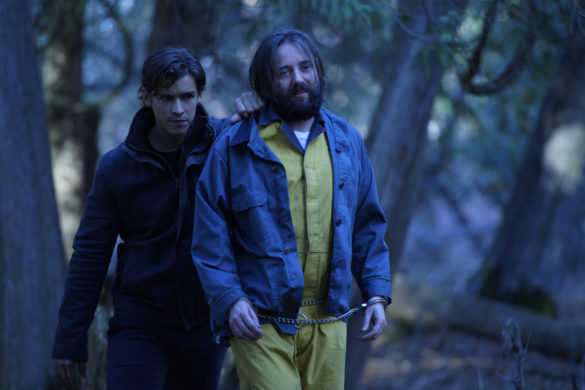 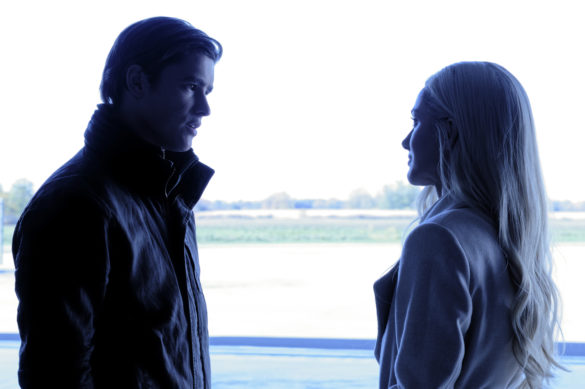 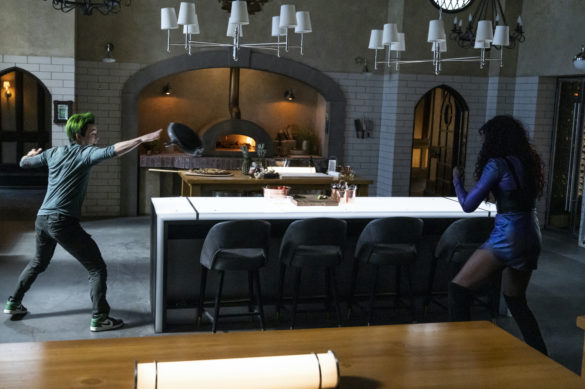 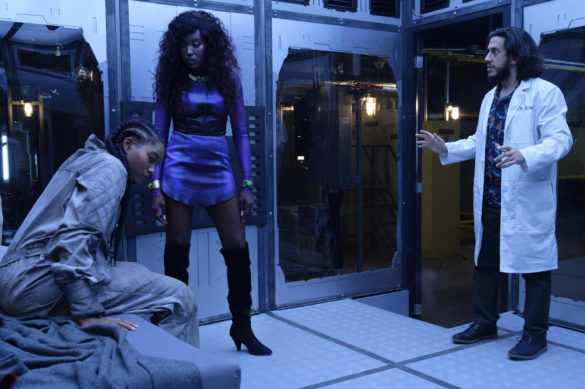 The other half of the episode leans away from the consequences of Hank’s death and towards seeds that have been planted since the first episode of the season. Koriand’r, AKA Starfire, has been having mysterious visions that seem to pull her out of her own body. She seems to not recognize her friends and attacks them, with Gar taking the brunt of these attacks. Although Gar is understandably afraid of his friend, he decides to help. Likening Starfire’s visions to their former teammates, Rachel Roth, own visions, Gar suggests she embraces them to figure out what’s going on.

One last punch and a car ride later, Starfire’s parked in the middle of nowhere with Gar in the trunk. She now knows that her visions are of her sister, Blackfire, in trouble, and that’s who brought them to this location, for a specific reason. Moving the car, they find the hatch to an underground laboratory. Complete with a mysterious, yet peppy, scientist.

The not-so-friendly family reunion ultimately leads to Kori and Gar (whom I believe is referred to as Beast Boy for the very first time by our peppy scientist) breaking Blackfire out of the laboratory. One can expect that this won’t end the way Kori wants it to.

Titans Season 3, Episode 4 – Blackfire continues to follow the stronger path this season has laid out. While the episode dealt with the fallout of Hank’s death from last week, it did it in a way that showed it was important, but didn’t needlessly dwell on it.

I fear that the show may be rushing too much to the finish line, but Blackfire is another homerun.