The world is awash in Harley Quinn collectibles, and the critical success of The Suicide Squad probably means that tide is unlikely to recede anytime soon. What is the dedicated  collector to do? Gobble up every piece that comes on the market like a starving hyena? Or should they tread a more discerning path, adding only particularly pleasing pieces? Either way, they’re going to want this cute little Harley Quinn MiniCo, based on her starfish punching look from The Suicide Squad! 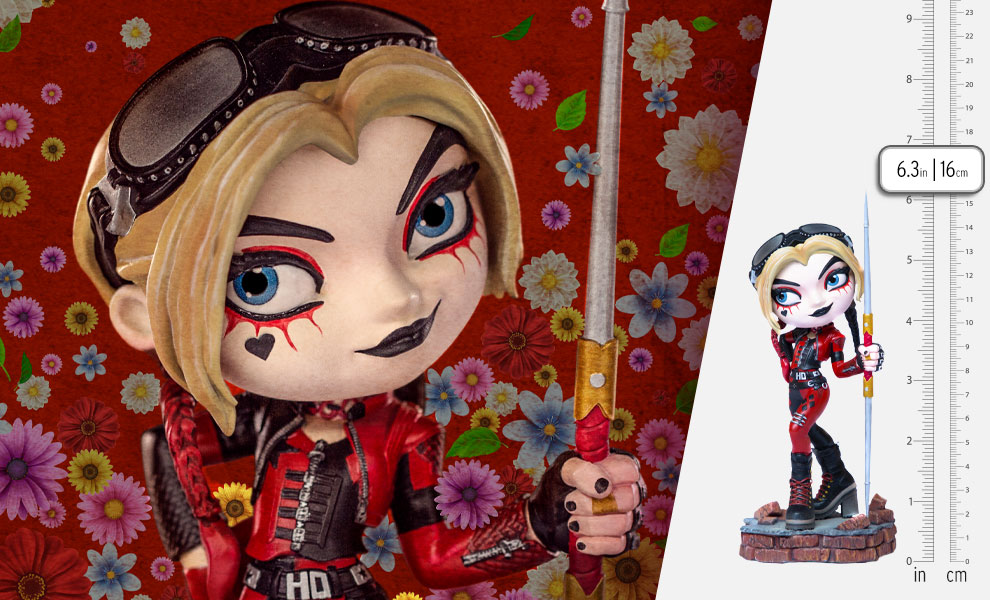 Who could stay mad at that face?

Here’s the pitch for this fun new Harley Quinn MiniCo:

She’s back, in her original colors but with a new red and black leather uniform, with elements that resemble her first costume. Her pants have the symbol of the suit of diamonds printed on them, and the leather jacket has the slogan “Live Fast Die Clown”, a subtle provocation to her ex-boyfriend Joker.

Gotham’s maid of mischief returns to the big screen in The Suicide Squad movie and gets her stylized Toy Art version in the “Harley Quinn – The Suicide Squad – MiniCo – Iron Studios” statue. With a pair of tactical glasses on her head and holding a Retractable Spear, she is standing on a base that evokes an urban combat scenario, posing with her hand on her waist in a charming and friendly way.

Once again the charismatic character, created by the duo Paul Dini and Bruce Timm in 1992 in the Batman: The Animated Series, returns to the big screen, played by Margot Robbie. She works alongside the Suicide Squad, a group of villains who act as anti-heroes for the government, to have their sentences reduced.

The item will be a great addition to the collection of DC and MiniCo fans and collectors!

Collectors of all things cute and adorable are going to go crazy over this new figure!