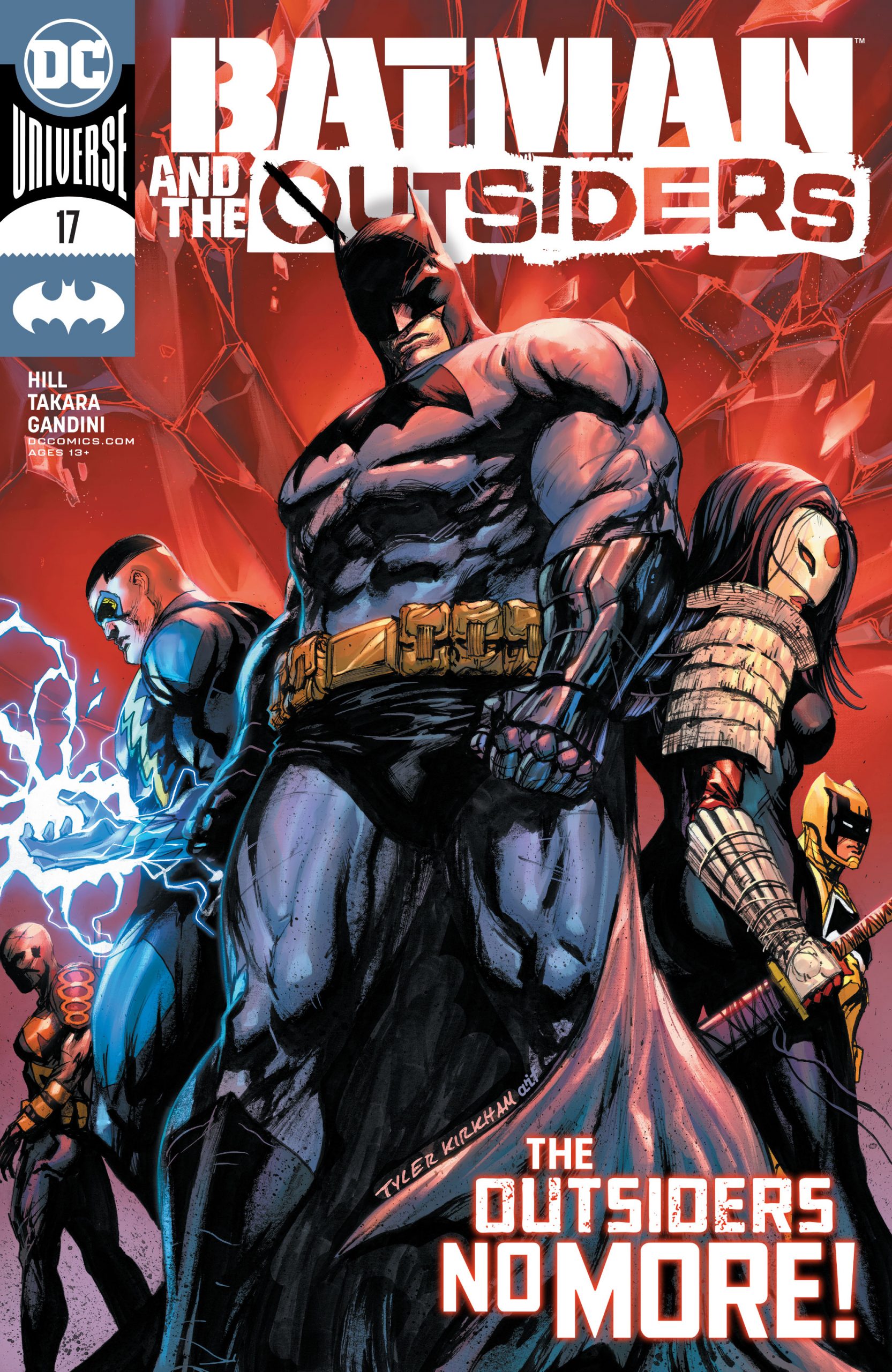 Batman And The Outsiders #17, the final issue of the current run, is not the comic I expected to read, nor the kind of finale that I wanted, but it delivers exactly the kind of closure that the series needed.

The previous 16 issues, and the annual, were mostly action based, with a few gorgeous character moments. This book is all character, and has given us completely a fresh way to end a series. Bryan Hill has achieved this by not relying on any tropes or convention. That’s a real first, and a welcome one. As anyone who’s ever read one of my reviews knows, I’m not one for spoilers, so I’ll only say this; don’t expect a happy ending, and don’t expect any character to end up where you thought they would. Expect some disappointment, expect consequences, and be prepared for as realistic an ending to a story as you’ll ever find in the pages of a comic-book.

If you’ve read Batman: The Joker War Zone you will have an idea about Cassandra’s place in Gotham City’s future, and that’s the only character that you can be sure we’ll be seeing again, sooner rather than later. I’ve seriously loved catching up with Tatsu Yamashiro, and Jefferson Pierce, so hope that their adventures will continue. I pray that we’ll be seeing more of Duke Thomas too, as this character has potential with a capital P. As for Sofia, and Shiva? Whoah boy… color me intrigued. 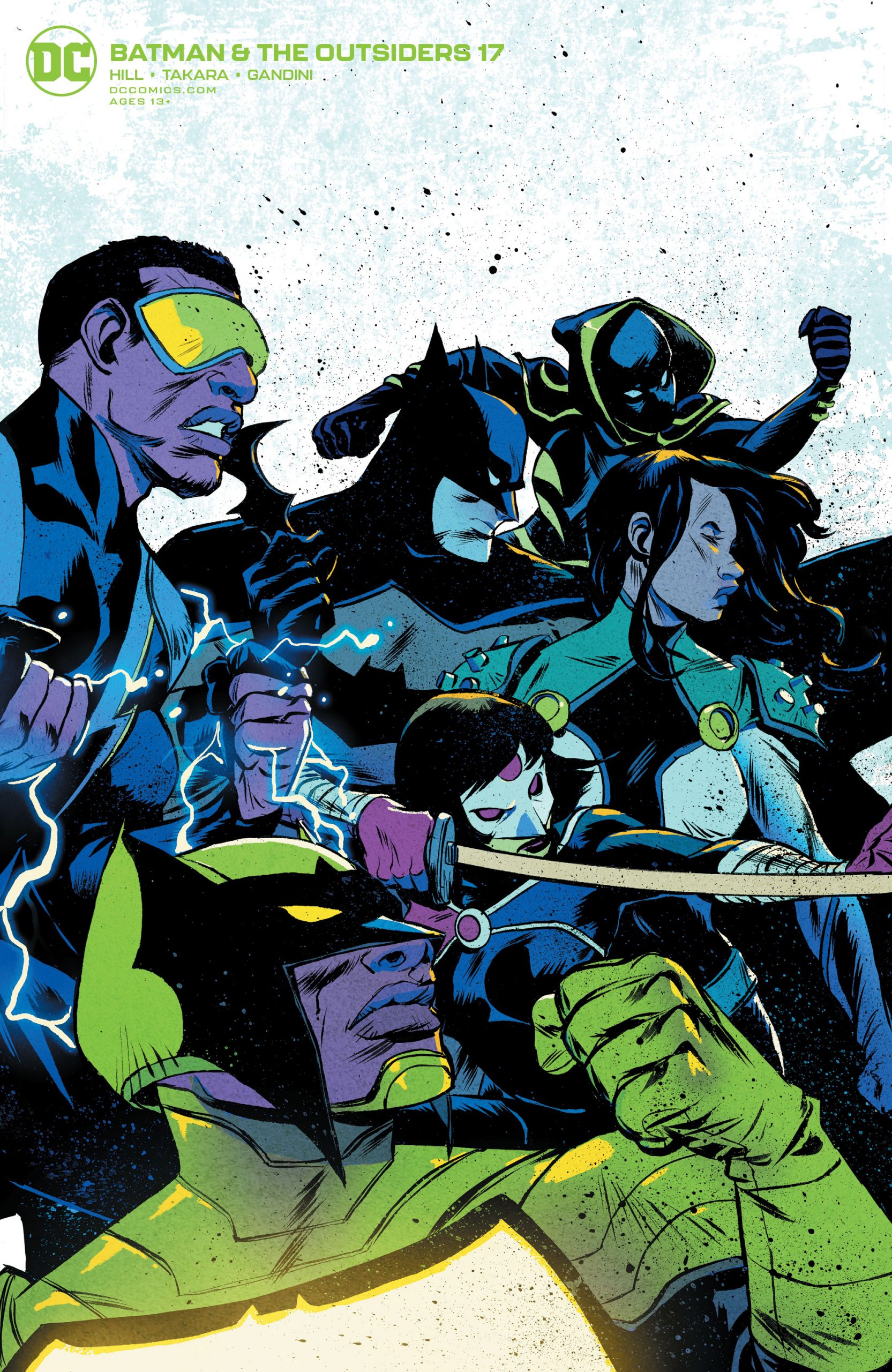 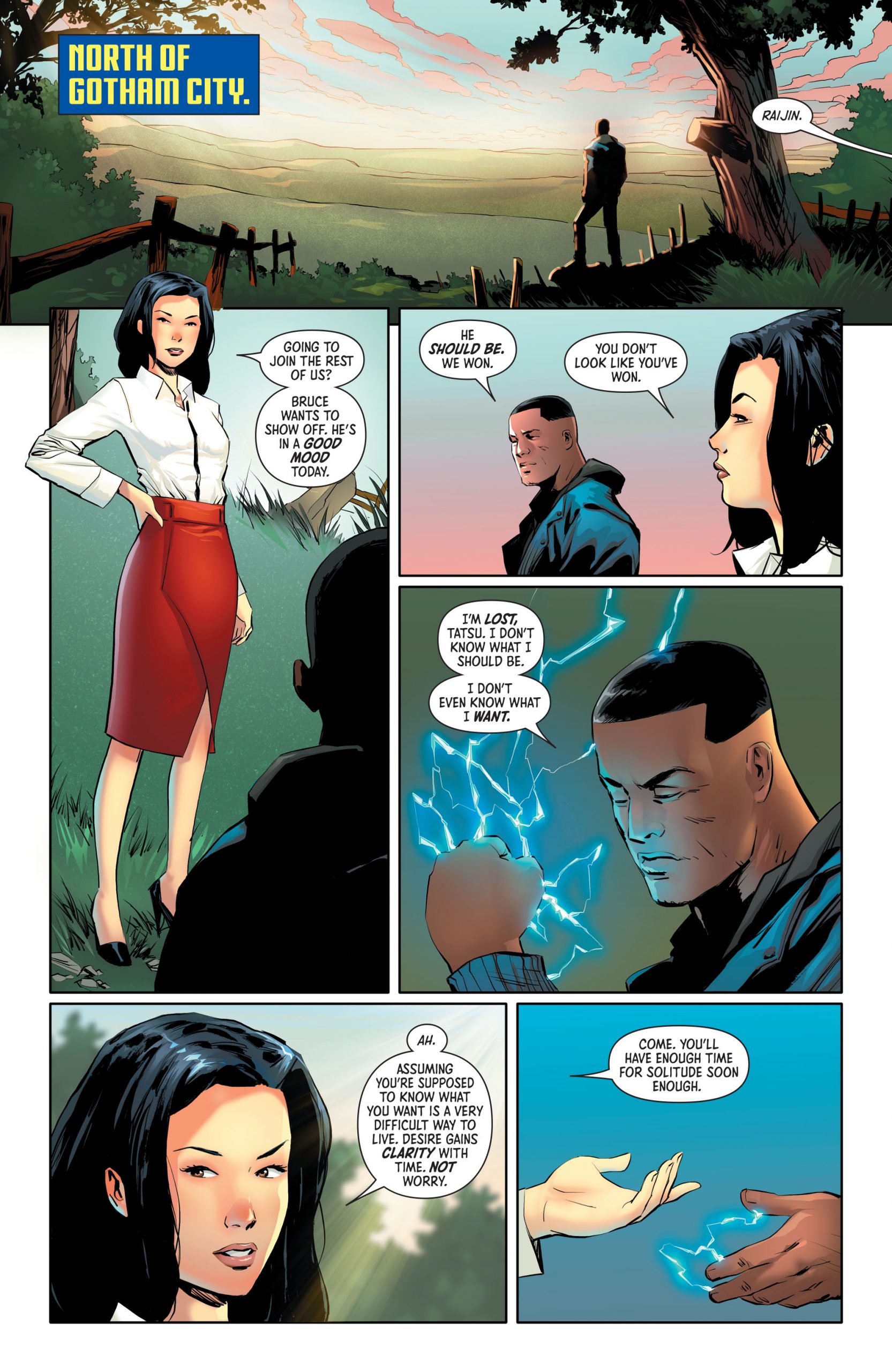 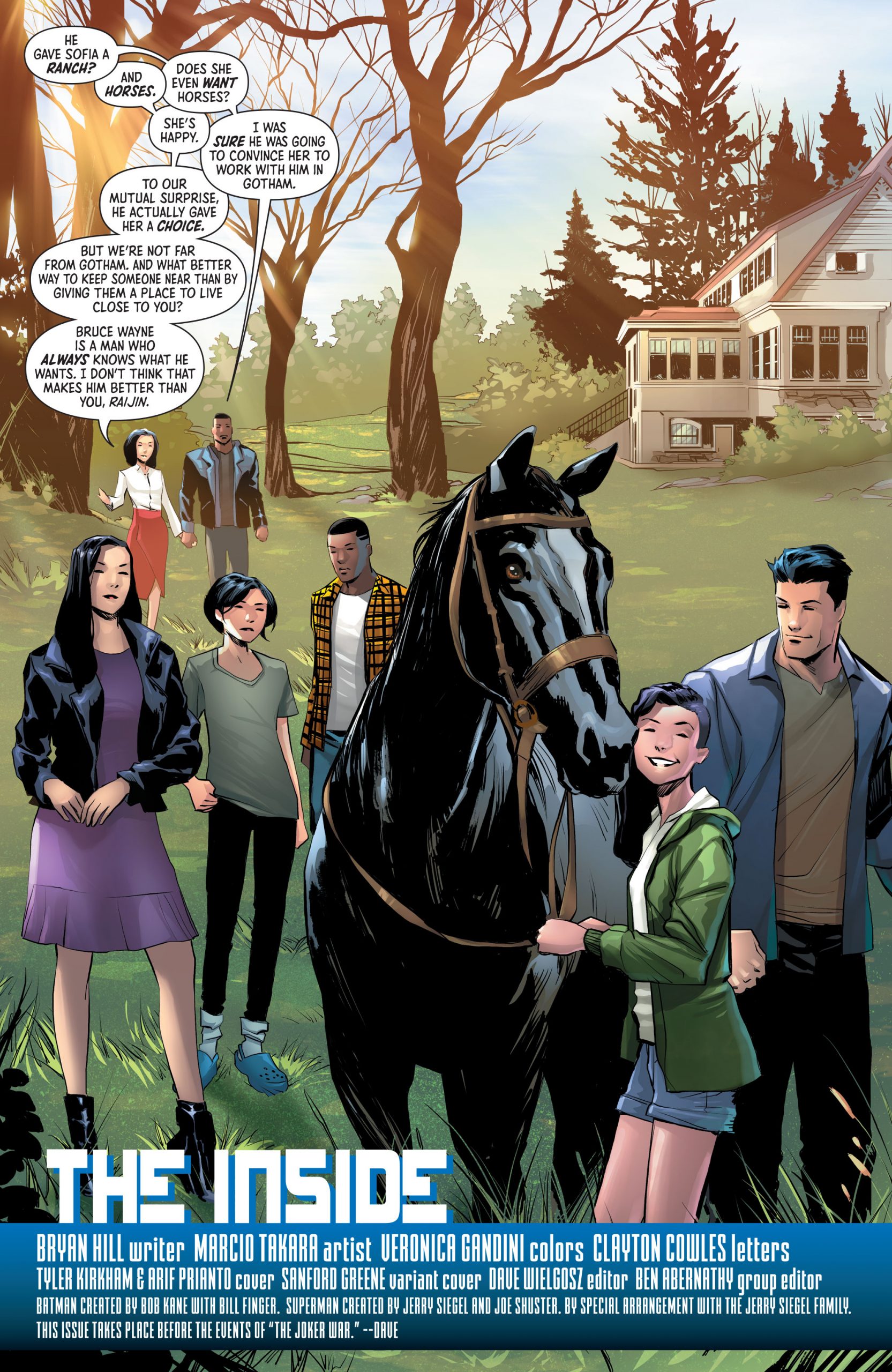 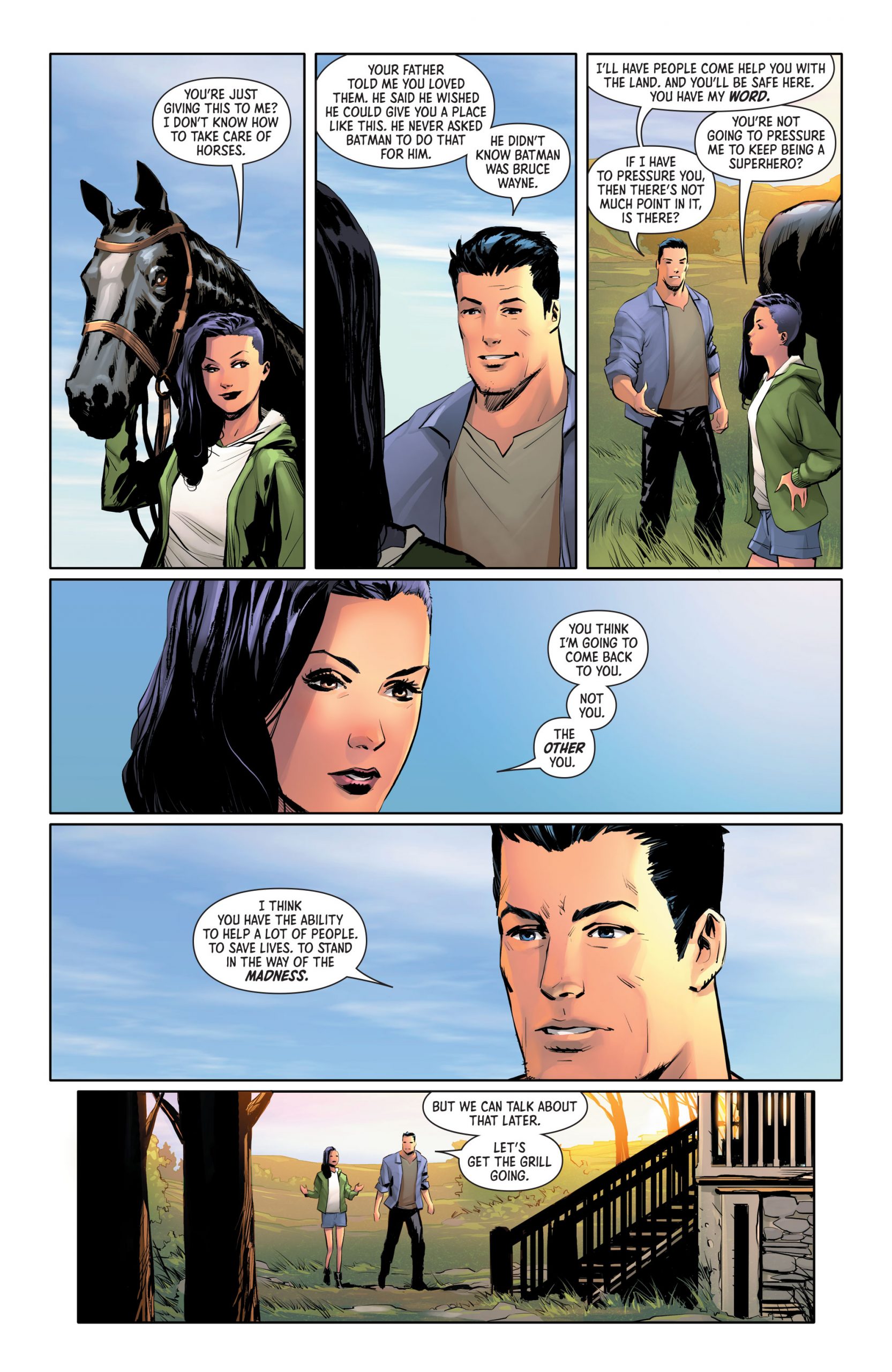 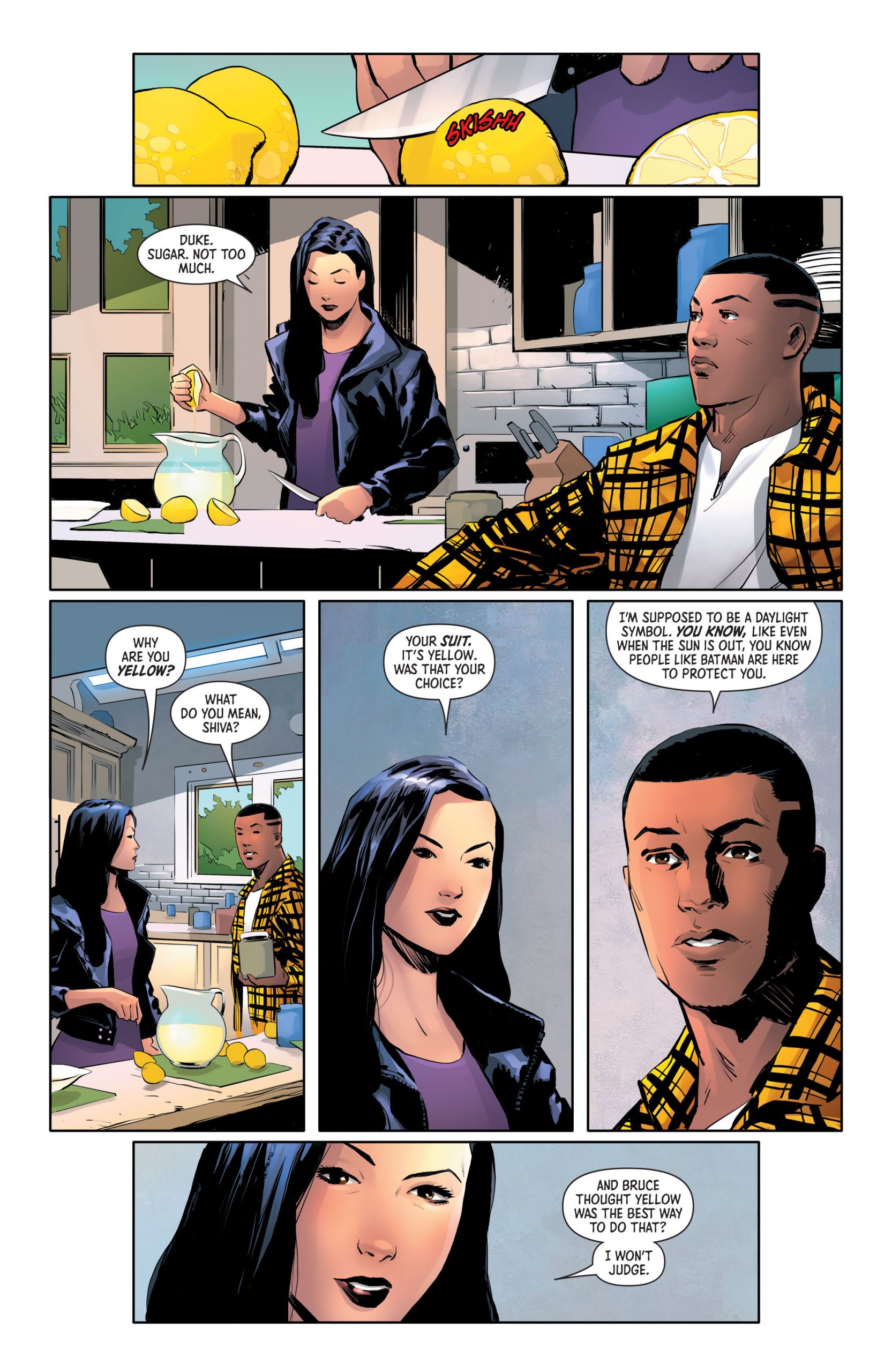 I was very sad not to see Dexter Soy’s art this month, but will look at this as a glass is half full scenario, meaning that he’s already started work on a new project. This issue’s artist, Marcio Takara, is no stranger to Batman’s world, and I’ve been a fan of his work for many years. His storytelling and character work here is sublime, and is made even more so by the wonderful colors provided by series regular, Veronica Gandini. Marcio’s already a well known name, but I gladly will state for the record that I will also now pick up any book I see with Veronica’s name on the cover.

I own every issue of this series digitally and in print form, so will miss picking it up every month, but am content in the knowledge that, while the ending may not be what most would could consider a happy one, at least it actually is one. Over the years many titles I’ve loved have come to an abrupt end, but few have had one as satisfying, or as true to life as the one that Batman And The Outsiders #17 has provided us.

I honestly believe that this series has been grossly underrated and underappreciated. I wish all these heroes bright futures, and all the characters whose adventures we’ve followed the same. Yes, when I say heroes I mean Bryan Hill, Veronica Gandini, Clayton Cowles and Dexter Soy. Thanks for a great run, and one that I’m sure will be remembered fondly when the Outsiders inevitably return.

Yes, I know they’ll be back one day.