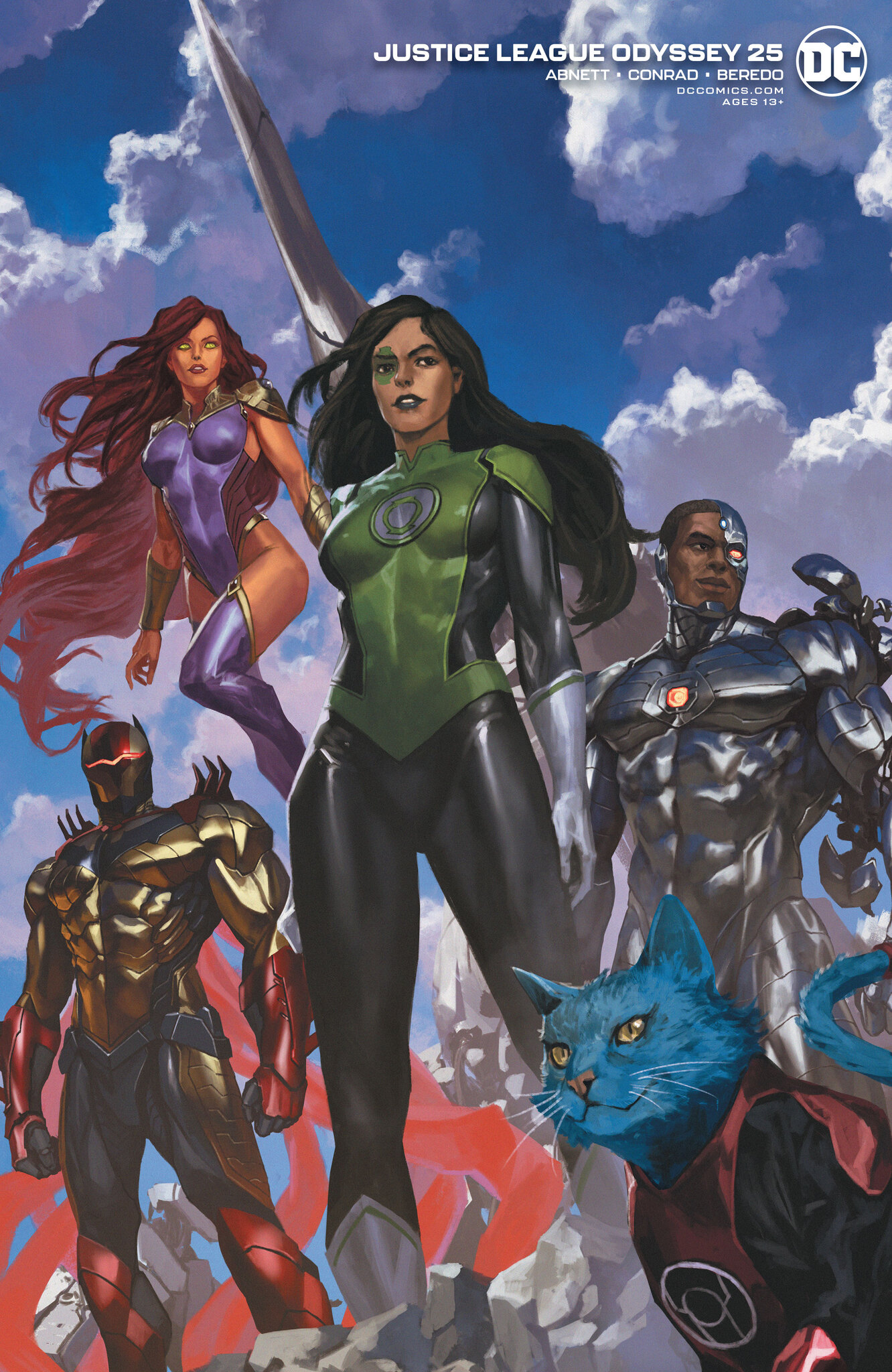 In Justice League Odyssey #25, the Justice League’s intergalactic team of Green Lantern Jessica Cruz, Orion of the New Gods, Red Lantern Dex-Starr, and New Teen Titans Starfire and Cyborg make a final stand against Darkseid in a battle that reshapes the cosmic landscape across every sector of space! This is the final issue of JLO!

Time and Multiverses! It really boils down to those complicated terms, yet so simple of terms. I do hate that this comic is ending as I enjoy eclectic teams as they mirror sports; you may not like your teammate, but you are out there to compete, and win. The same goes for a comic team, as this recipe was not made from natural ingredients, but it sure provided Cyborg and Jessica Cruz with the pieces needed to evolve their leadership skills, as well as form new partnerships, like the one between Dex-Starr (Red Lantern) and Cruz (Green Lantern).

Dan Abnett sews up the the series by sacrificing a couple of major characters (no spoilers here)… ish. No Black Widow moments here, no reaching back in time to get yourself, and then sacrificing yourself, but surviving. Abner breaks Doc Brown’s Back to the Future rules, but that movie isn’t canon, and its not set in the DC universe! 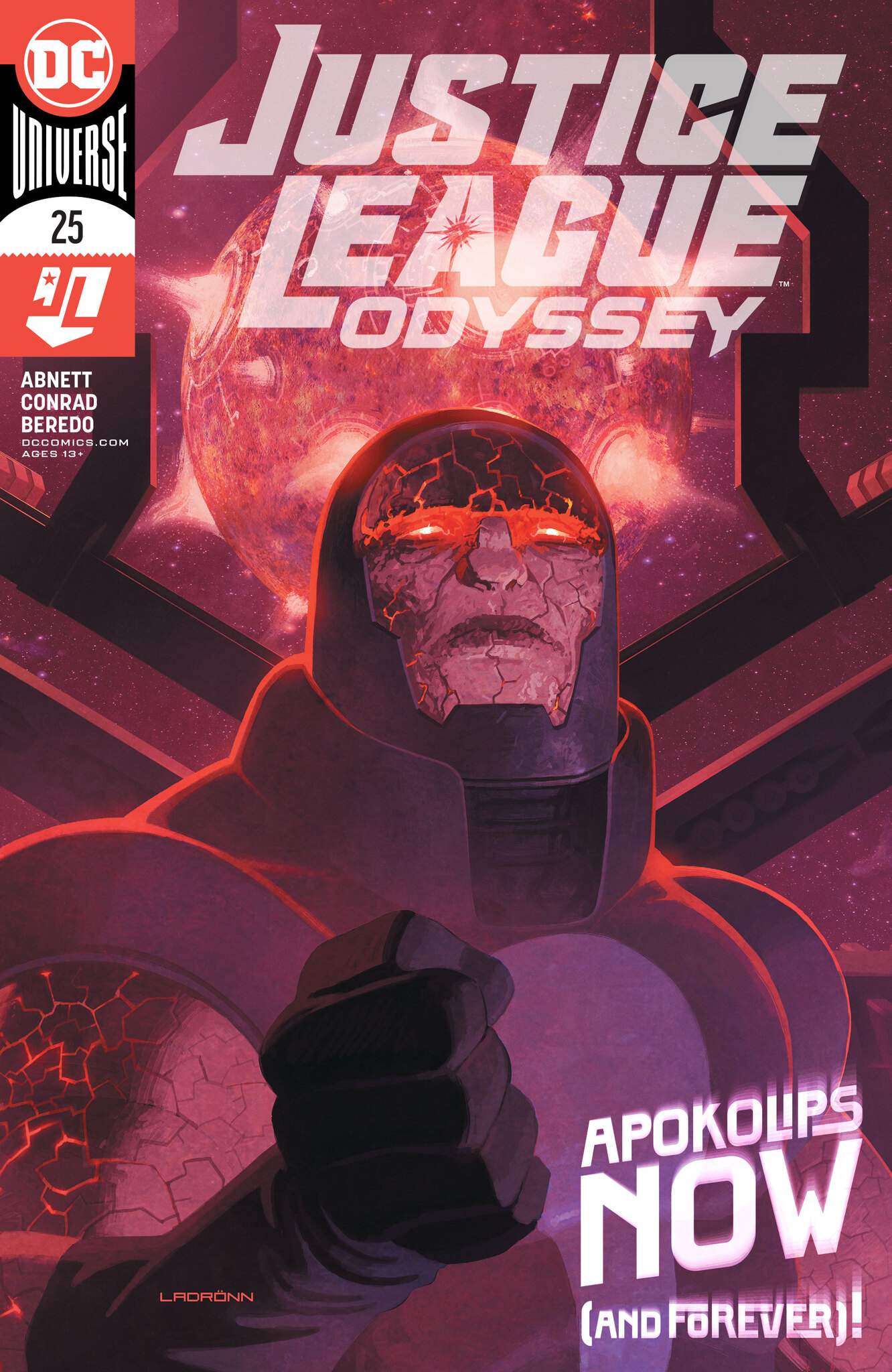 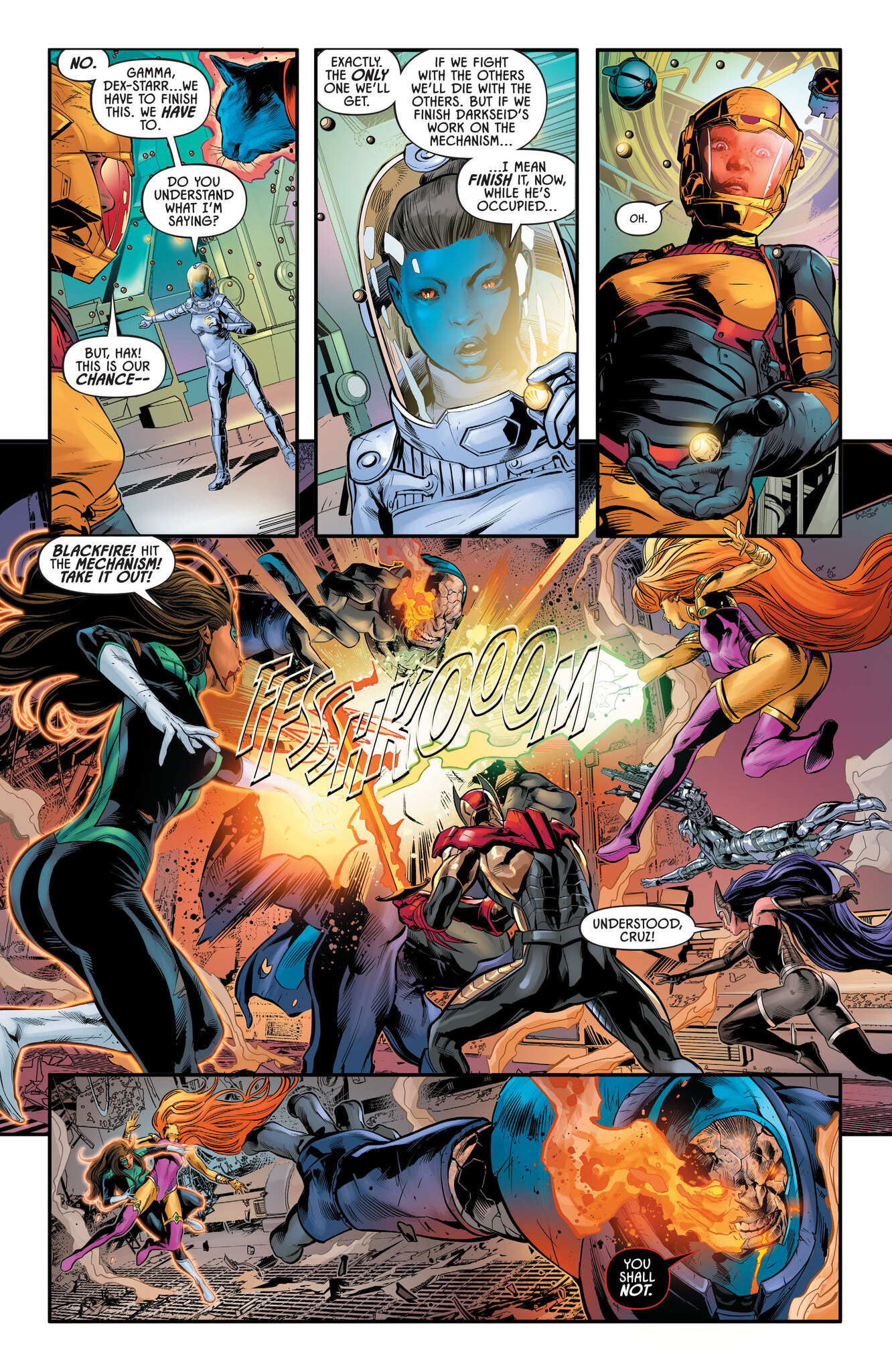 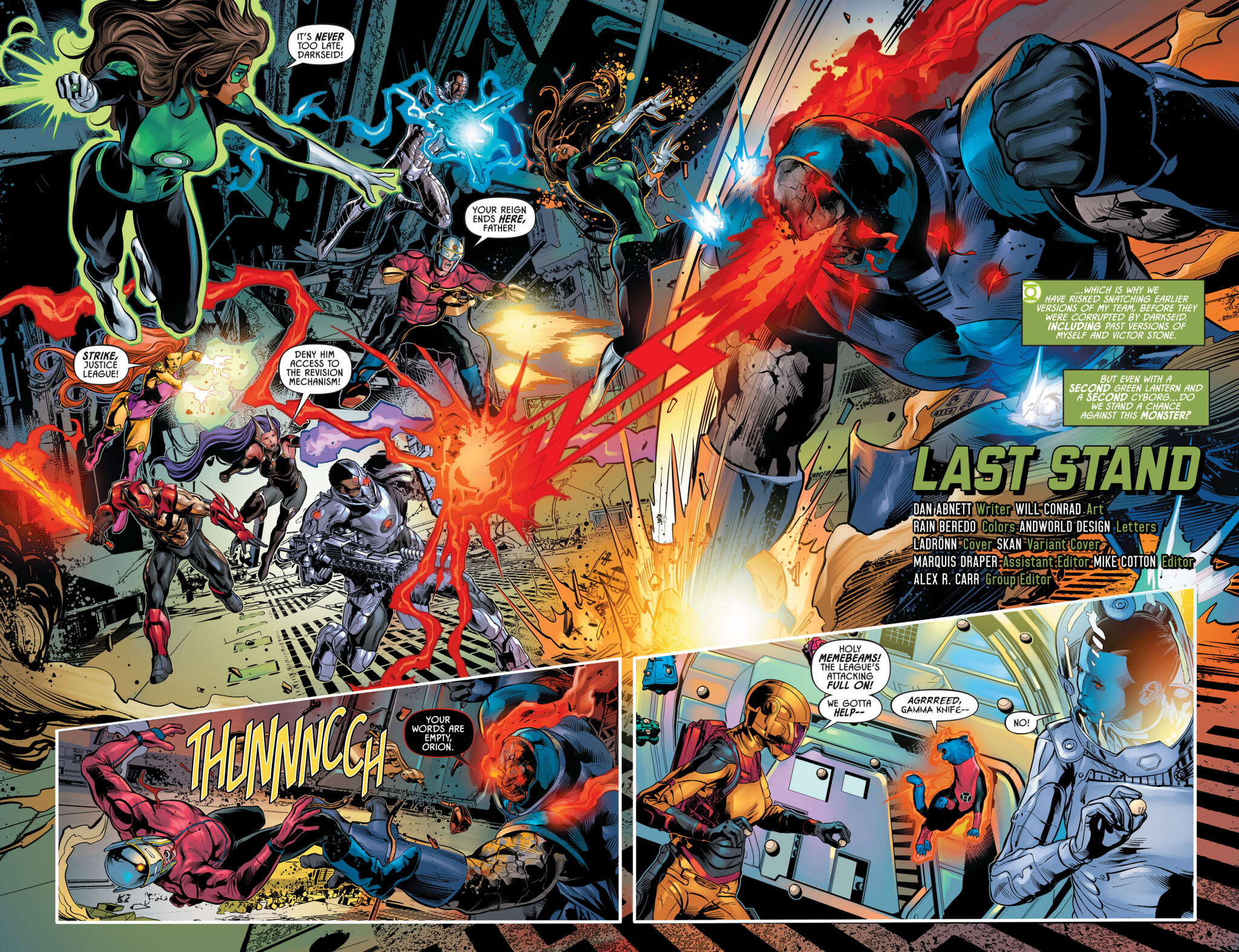 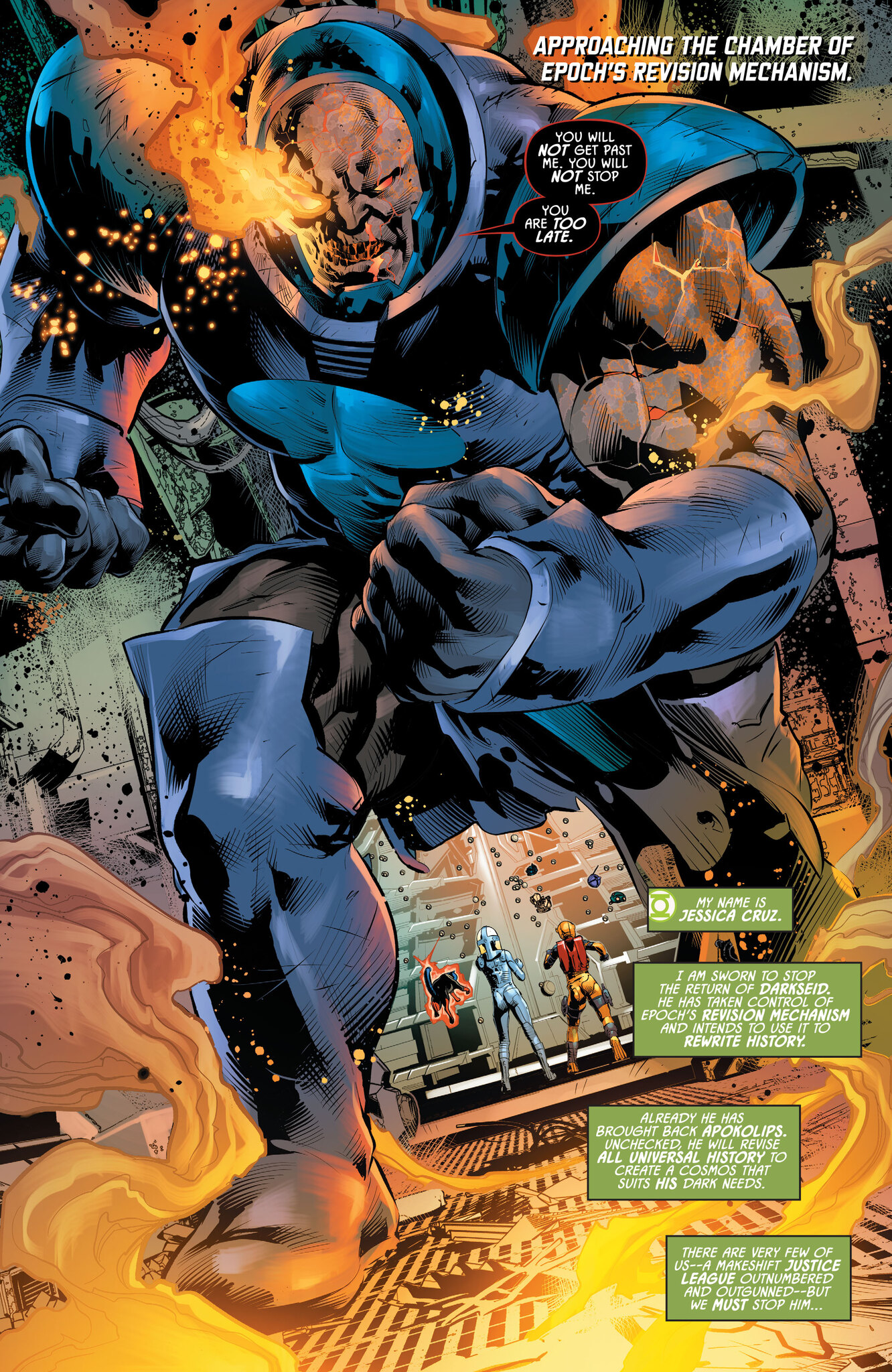 I think the DC Universe “won” in that Darkseid arguably got his Apokolips back, and without him as a major player in the DC universe, you really have eternal peace on the outskirts of the universe. Not a bad idea, but half the fun is seeing what plans Darkseid has to gobble up other worlds.

I do struggle with the Darkseid/Thanos comparisons and with all the recent time travel/Avengers/cinema moves that have been made, was this all a copy?

DC has a superstar in this character.  When the dust settles, she should rightfully take her place among the core JLA members. She’s the new guard, and Abnett has written her as beautifully as well as Will Conrad has drawn her on these pages!

Take care Jess!  Tell the Guardians they still have a Multiverse thanks to you.

Justice League Odyssey #25 brings the series to an end, and everyone has gone their respective ways… but the cliff-hanger of an ending/beginning! It’s an issue replete with great storytelling, as we’ve been watching some current Justice League shenanigans, and not even realizing the “prequel” unfolding before our eyes in JLO.

DC has done a great job in getting all of its writers on one page!

DC Future State Gives Fans A Look At What’s Coming Next For The DC Universe In January 2021!