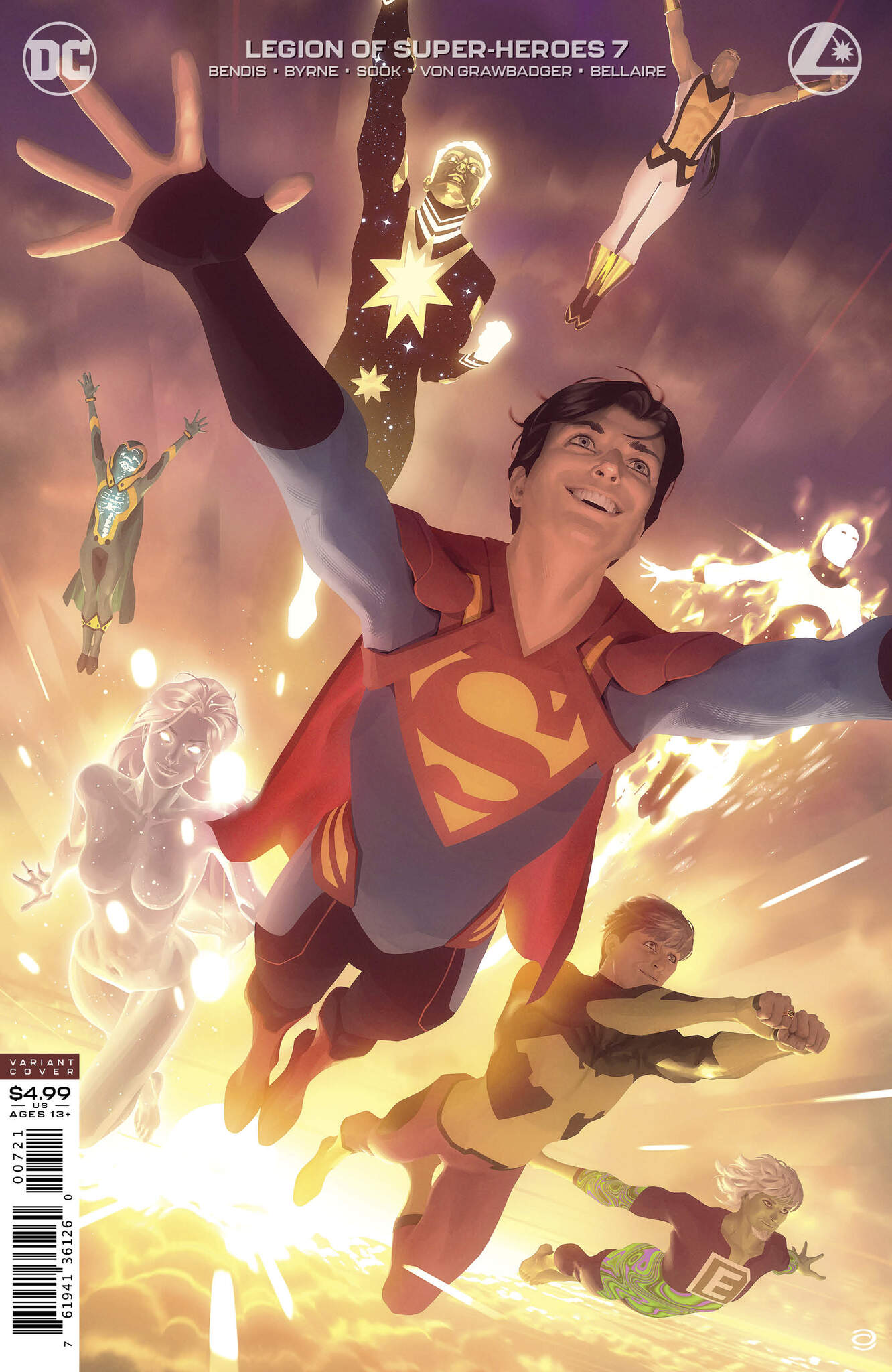 Welcome to the 31st century and Legion of Super-Heroes #7!

Jonathan Kent, intergalactic fugitive! The United Planets is less than thrilled with the decision to bring Superboy a thousand years into the future to protect the past. Planet Gotham is under siege. Ultra Boy’s home-world is on the verge of all-out war. As if that weren’t enough, new Legionnaire drama unfolds as Saturn Girl and Cosmic Boy throw down over who should take on the Legion’s leadership! Plus, Brainiac 5 is about to reveal a secret that will make one Legionnaire quit the team – and we ask the burning question: Who is the strongest Legionnaire?

As you settle in on this series, you find yourself getting used to Bendis’ formula: Introduce, or “Re-introduce”, a member of the Legion on the first page, In this case, it’s Wildfire. Subsequently, will come a story synopsis and one-two pages of full team photos flying or posing as they are called to assemble.

Finally, you also get some more of the story too.

“I am Rokk Krinn, Cosmic Boy, Leader of the Legion!”

As fast as we were introduced last issue to the likes of Gold Lantern, Monster Boy and Dr. Fate, they’re reduced to background fillers in montage pages. Subsequently, as Rokk Krinn addresses the Madam Honor President, and The United Planets in the Great Hall, we learn of dissension in the ranks for the Legion.

While the President initially is not in favor of how Cosmic Boy begins his soliloquy, she quickly reverses her stance on the Legion after an interjection by Jonathan Kent in his advisory role to the Legion. In fact, Jonathan’s role in the Legion is more clearly defined now than it has been in prior issues…though Legion fans clearly want a more definitive relation line with he and Mon-El (sorry…not this issue)! 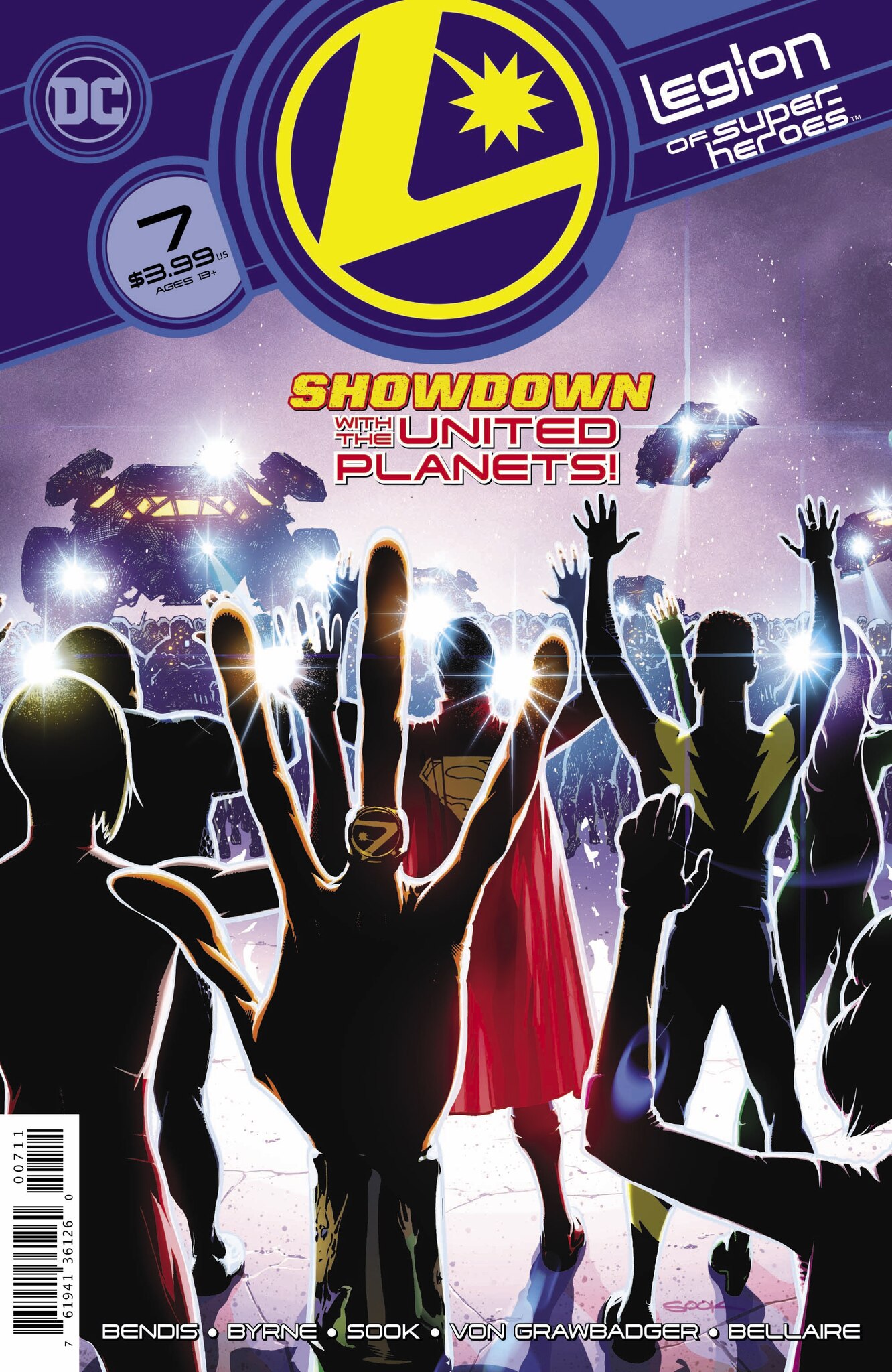 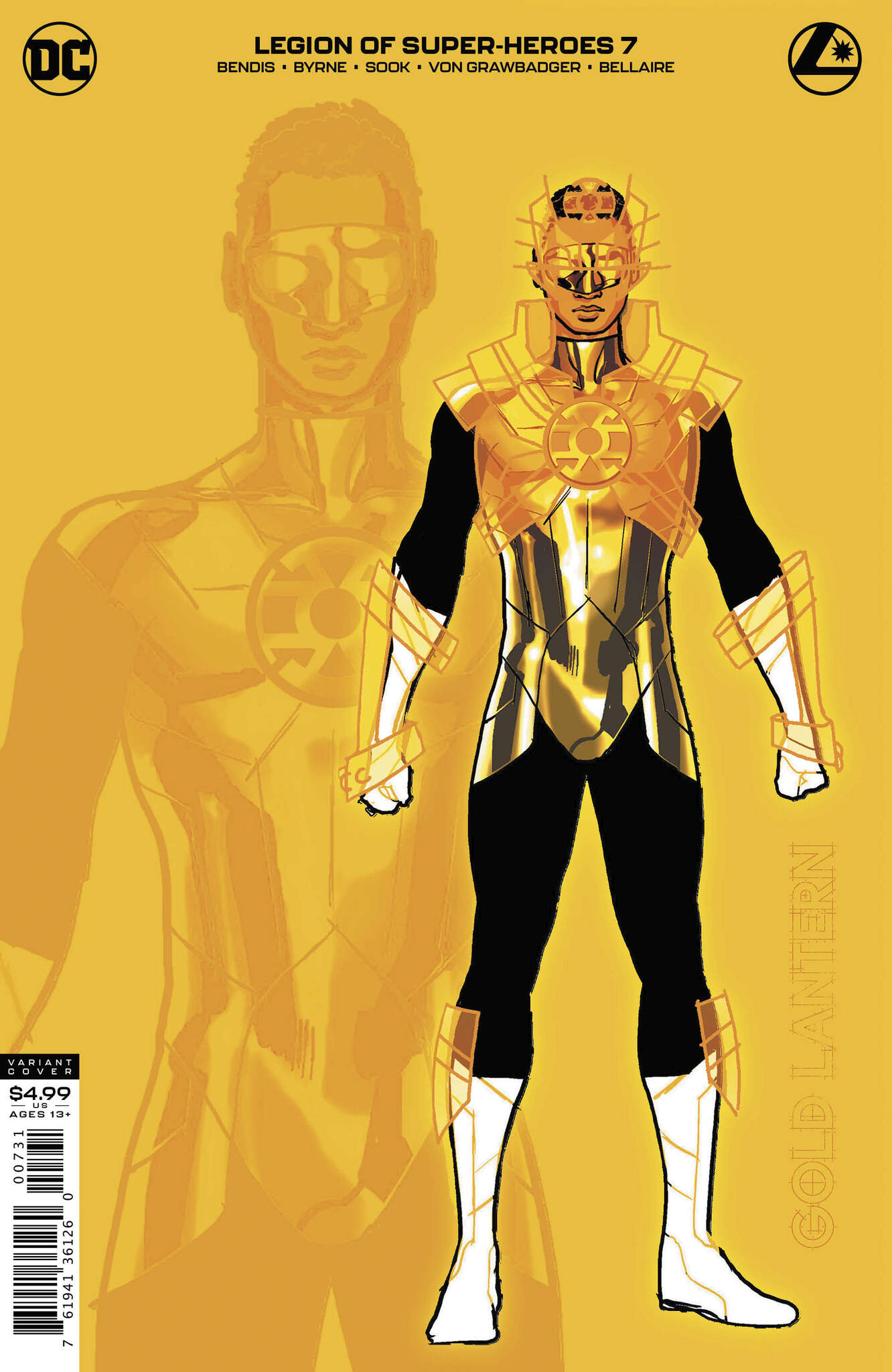 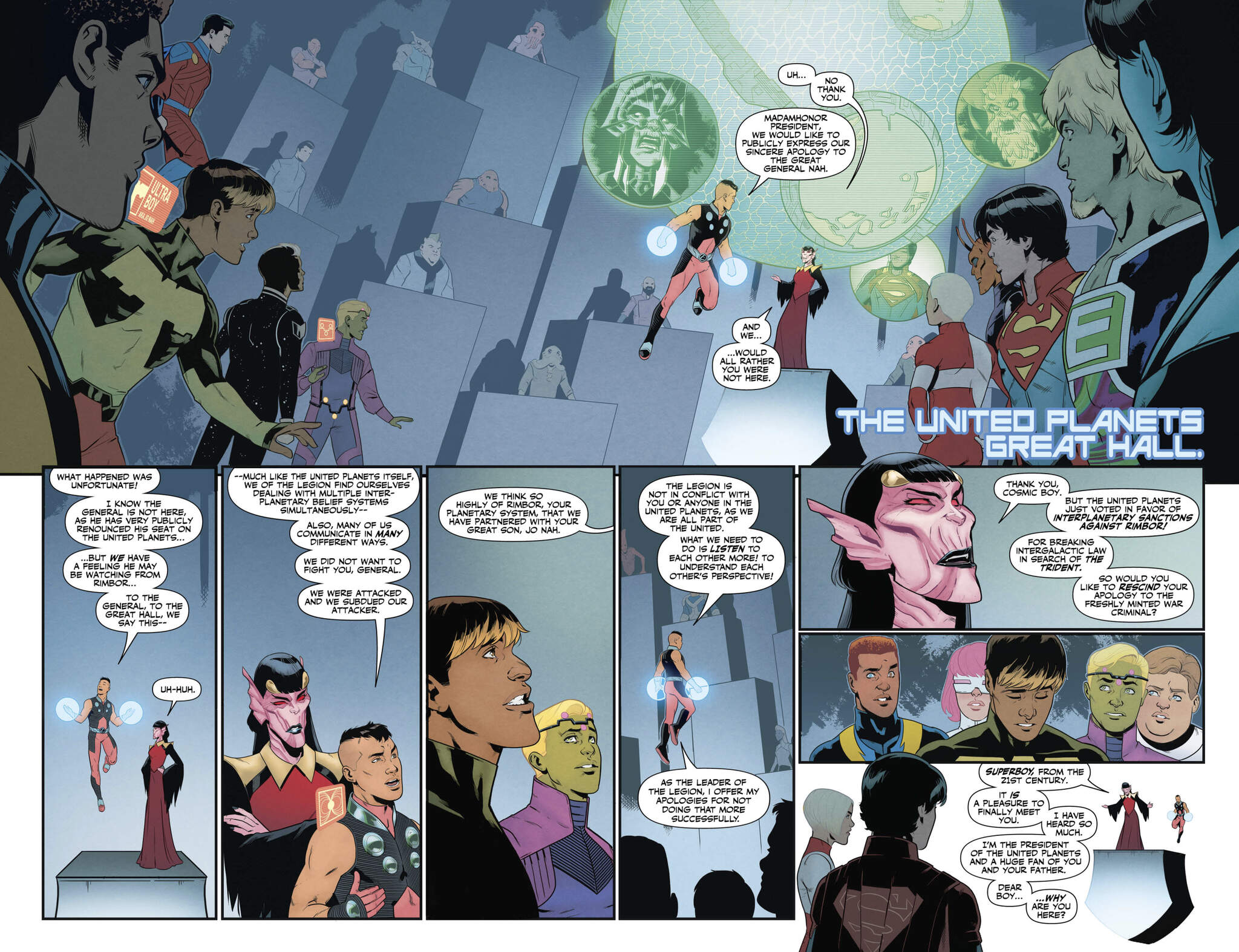 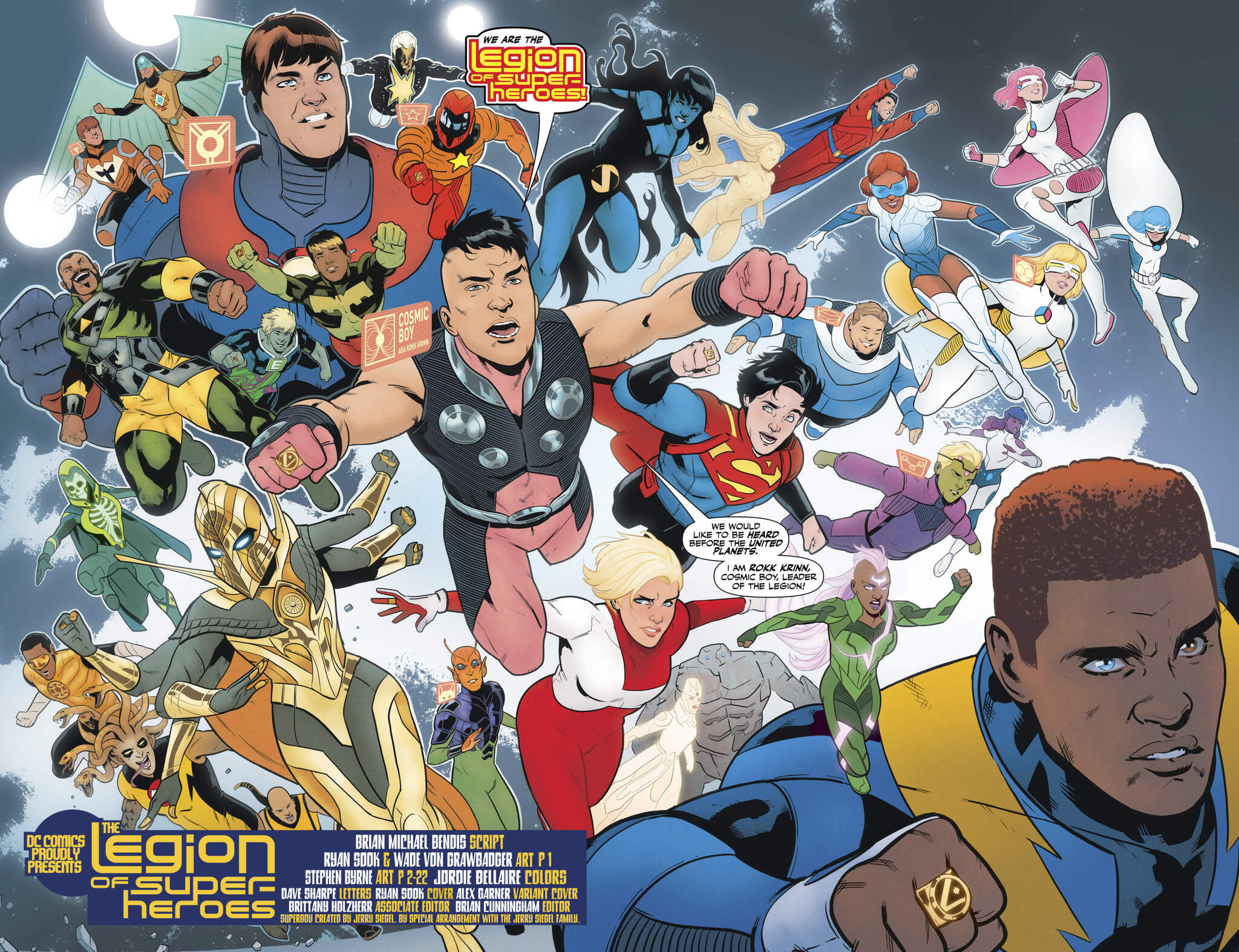 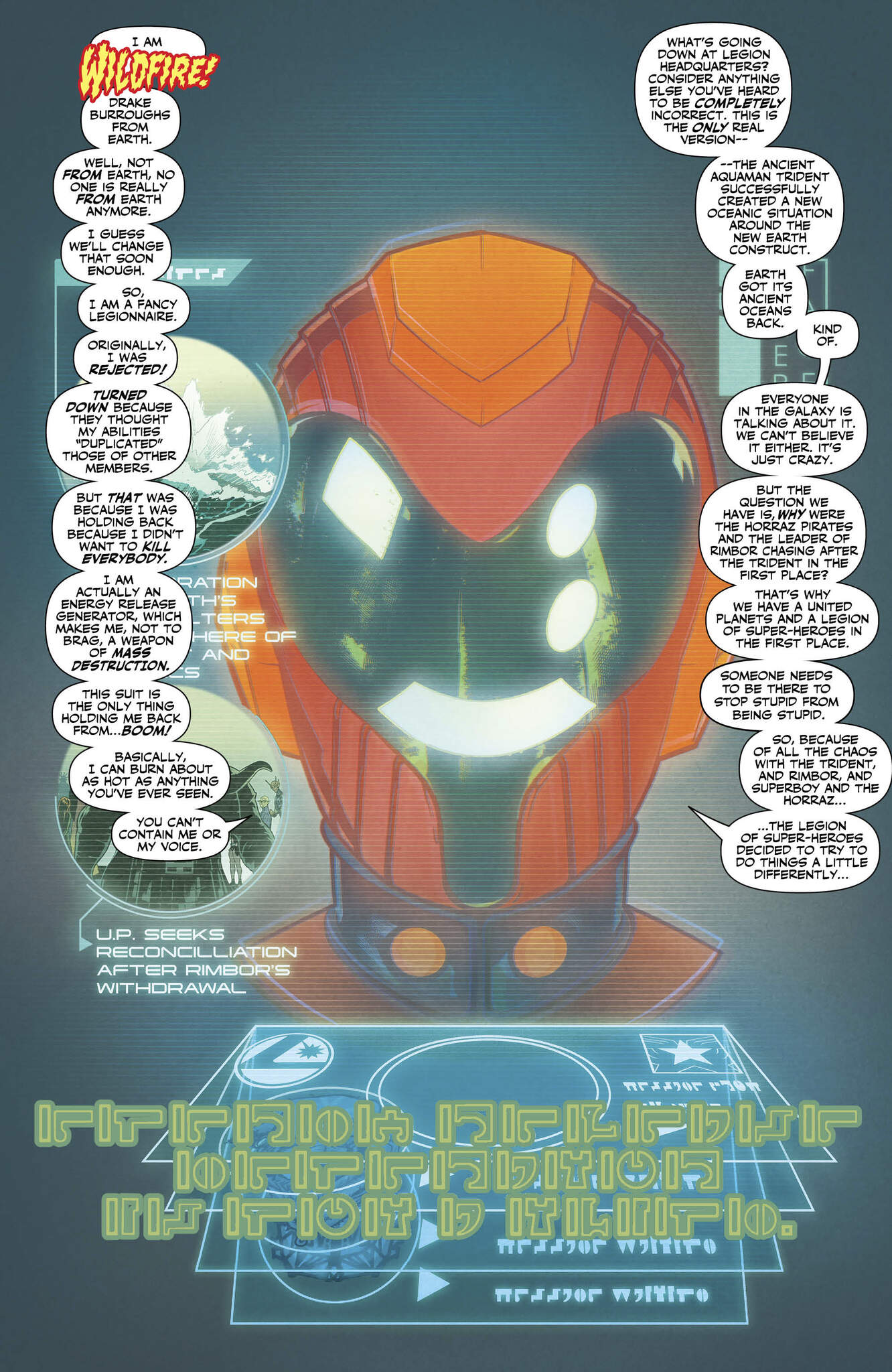 Bendis provides an interesting commentary on life as a young adult. Last issue’s topic was prejudice, while this time it’s the use of pronouns, using Triplicate Girl is perfect, as pronoun usage among young people now is definitely an identity and equity topic among colleges. Bendis is topical… I’ll give him that!

Watching the Legion elect a new leader is cringe-worthy. I couldn’t decide if this was satire, commentary, or simply real life within the pages of a comic. Once again, Bendis has his finger on the pulse of politics.

And the Results are in

Turns out we have a winner and a sore loser in regards to leading the Legion. Time will tell (as will the next issue) if the correct choice was made.

Stephen Byrne, and Ryan Sook are pouring themselves into the art of this comic, their art convey the busy aspects of the future, but they also maintain some aspect of order in so many characters.

I appreciate Bendis slipping in the family story of Lightning Lad, as it’s a solid contribution on his part at fleshing out a new Lightning Lad so the fan base appreciate the turn Bendis has taken.

Bendis’ work on the Legion is becoming a bit formula driven. It’s a huge task with a LOT of characters to keep new and old readers involved in the Legionnaires, and the storyline. It all seems to be an enormous task for Bendis as of late. Jonathan Kent and Brainiac 5 recently visited Superman. Perhaps it’s time for the Legion to find two arenas… it works for the Justice League.