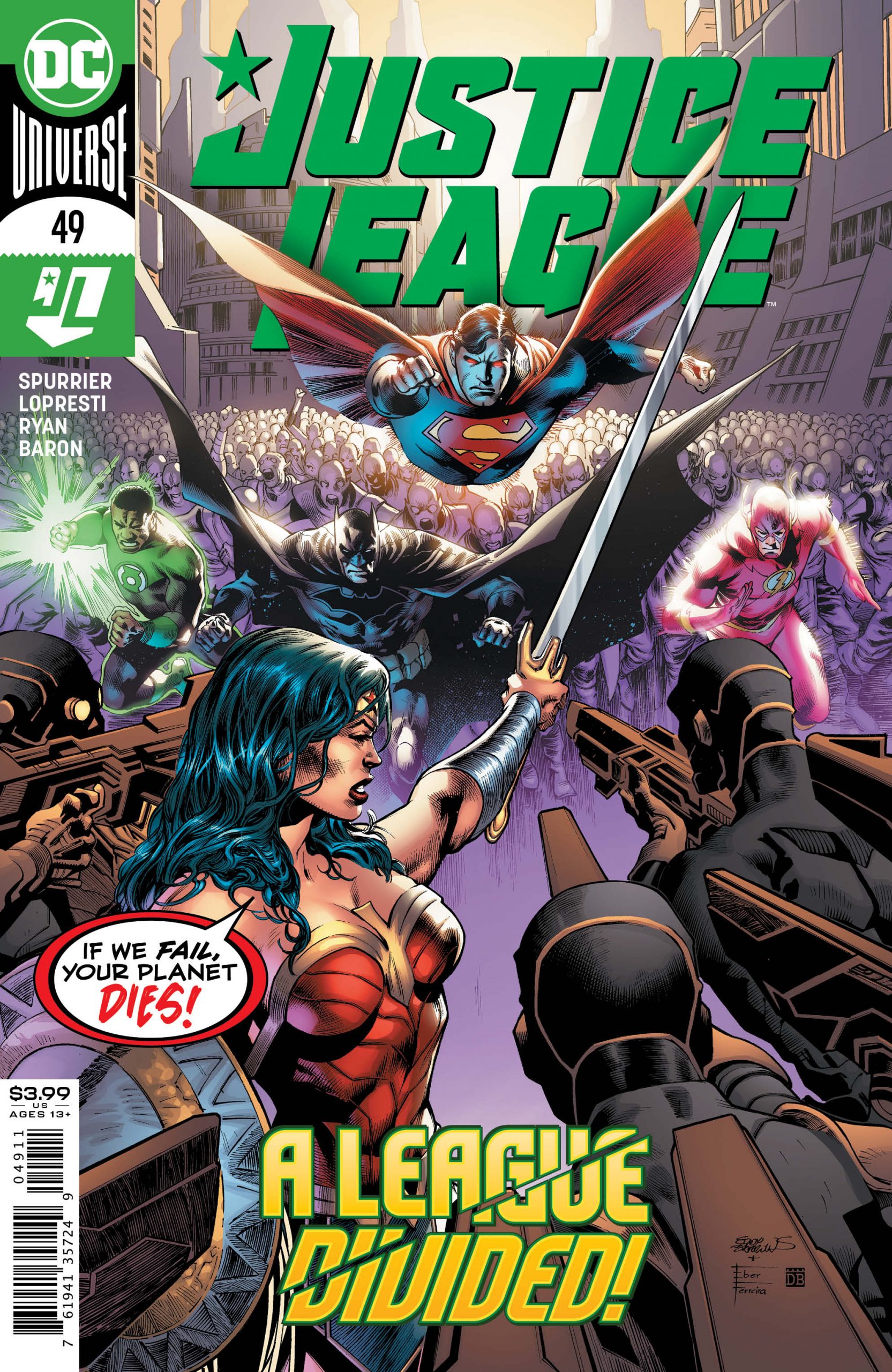 Wonder Woman has a story to tell, as the League struggles with their new role as rulers ,in this week’s Justice League #49.

Diana is not a happy camper these days. She’s frustrated with her colleagues, who have decided that they should rule over an alien race called the Trotha. Mind you – these people are a hot mess. They’re divided over tribal lines, and the previous ruler governed via terror, in order to maintain peace. Once this despot was removed, the Trotha asked the League to rule. In the face of a hostile race called the Vermidiim, everyone agreed to this, except Wonder Woman.

Most of the issue depicts the League rushing around, trying to prepare the Trotha for the Vermidiim invasion, while committing various blunders. Each mistake depicts the pitfalls of trying to rule a race, while being completely ignorant of their customs, and cultures.

Si Spurrier’s script is excellent. The issue revolves around Wonder Woman’s narration, as she’s speaking to Batman and the Trotha’s overthrown despot. While she tells an ancient Amazonian tale about a warrior Giantess turned empress, her myth has real parallels with the League’s attempts to govern the Trotha.

It doesn’t take much imagination to see its connection with American Neo-con foreign policy (think George W. Bush’s invasion and occupation of Iraq). Therefore, the brilliance of this issue is that it serves as a sort of meta-fiction: as Wonder Woman’s parable exposes the dangers of “benevolent Imperialism” to Batman, Justice League #49 serves the same function for its readers. 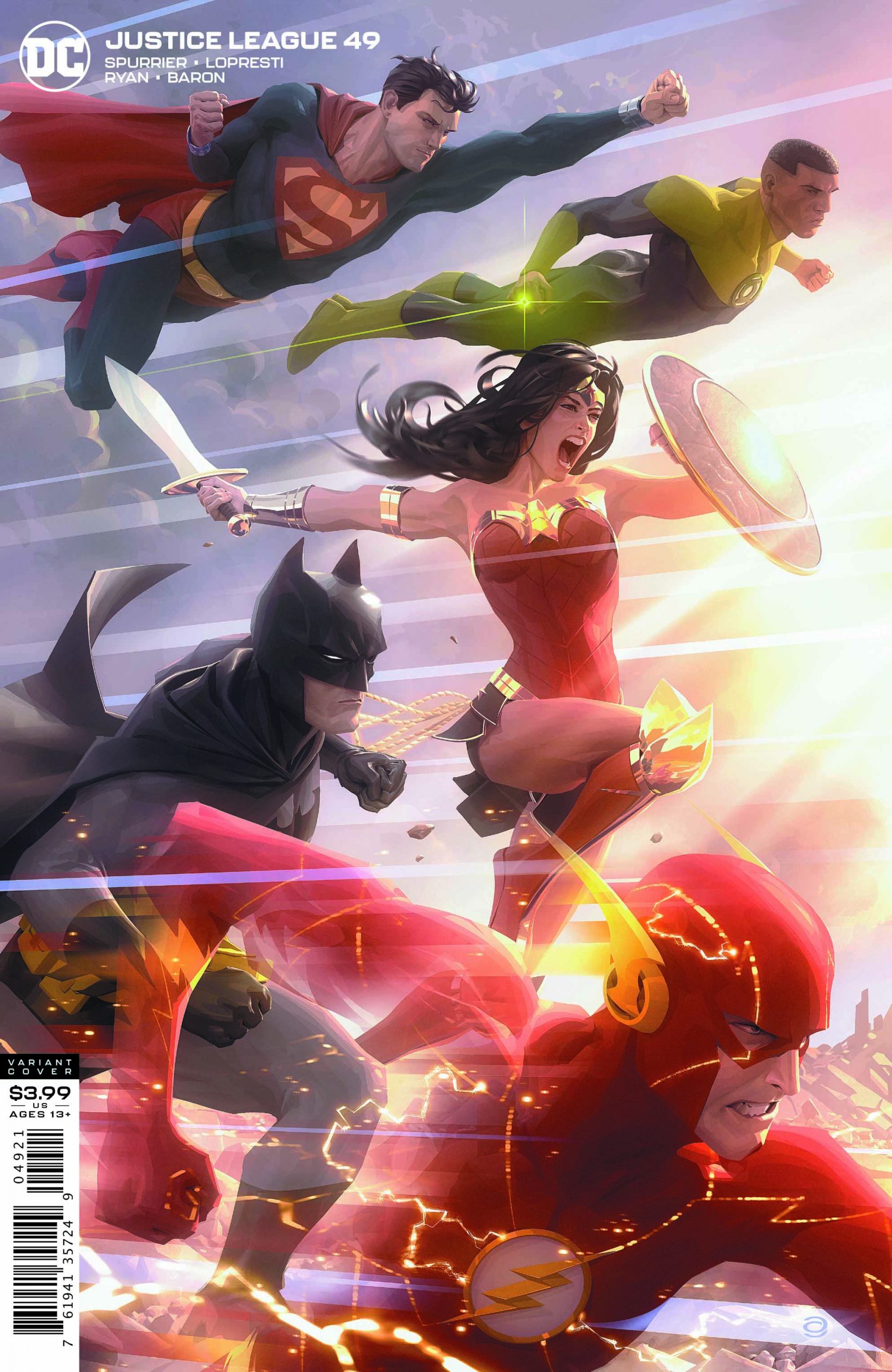 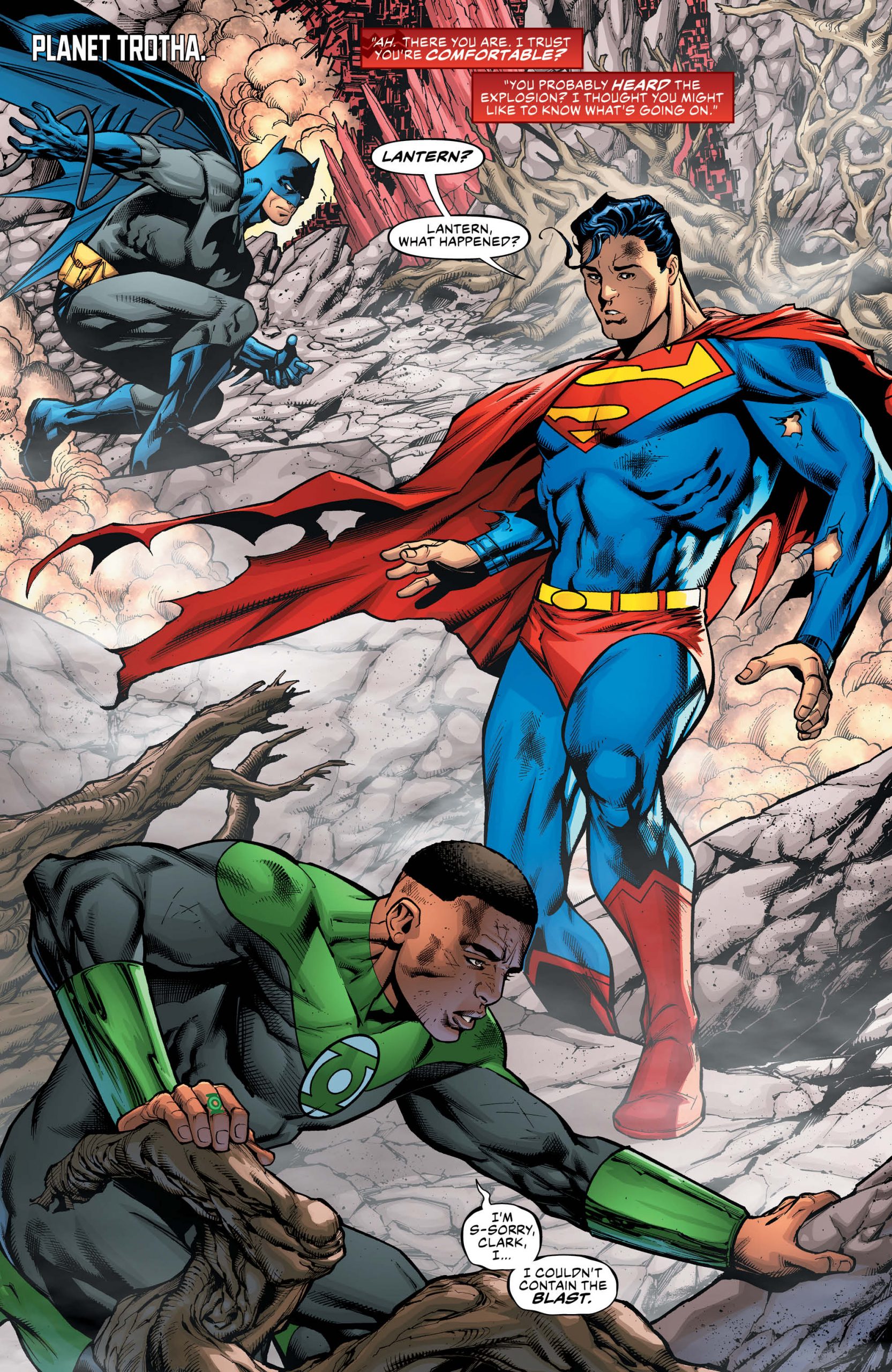 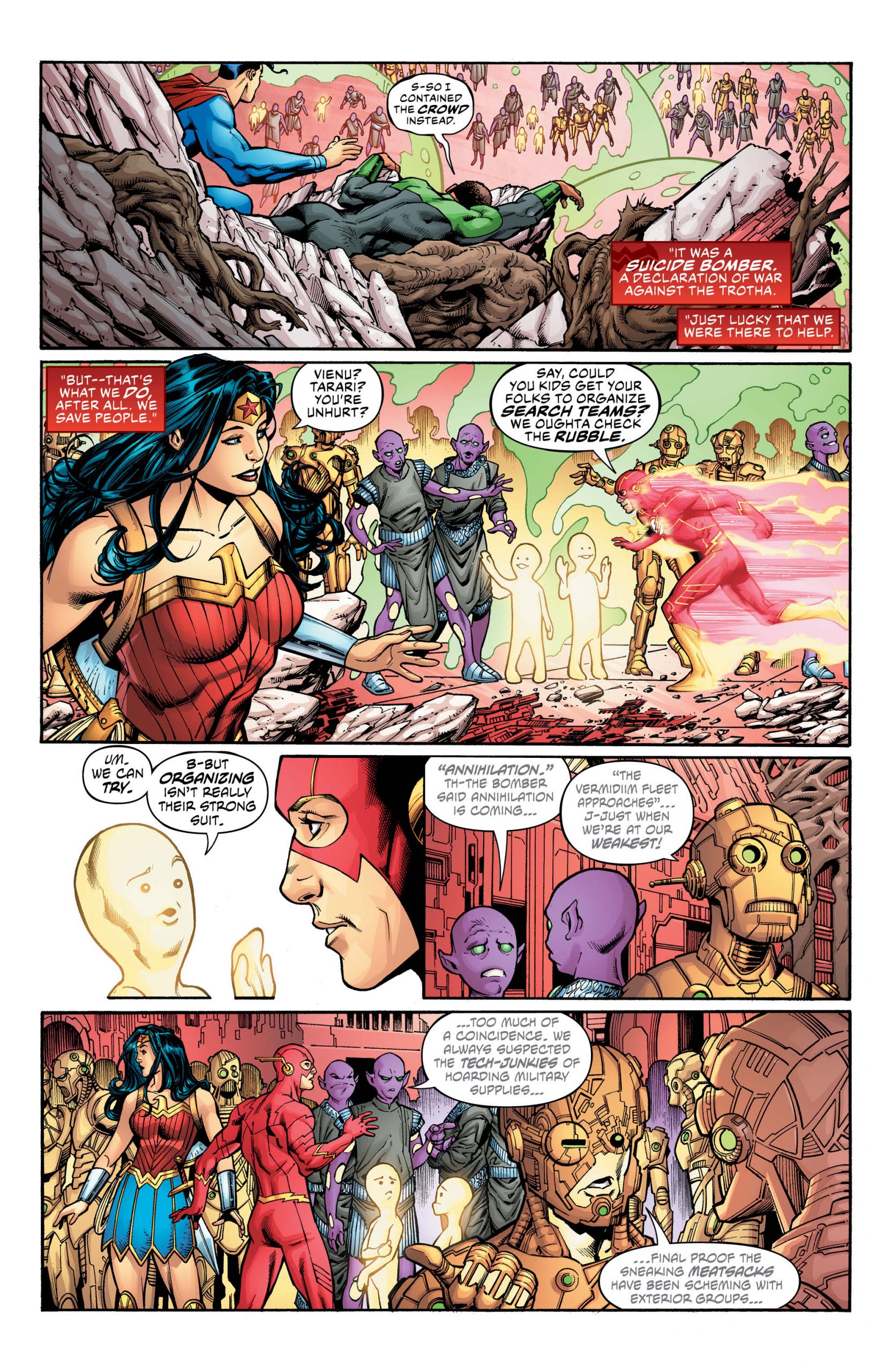 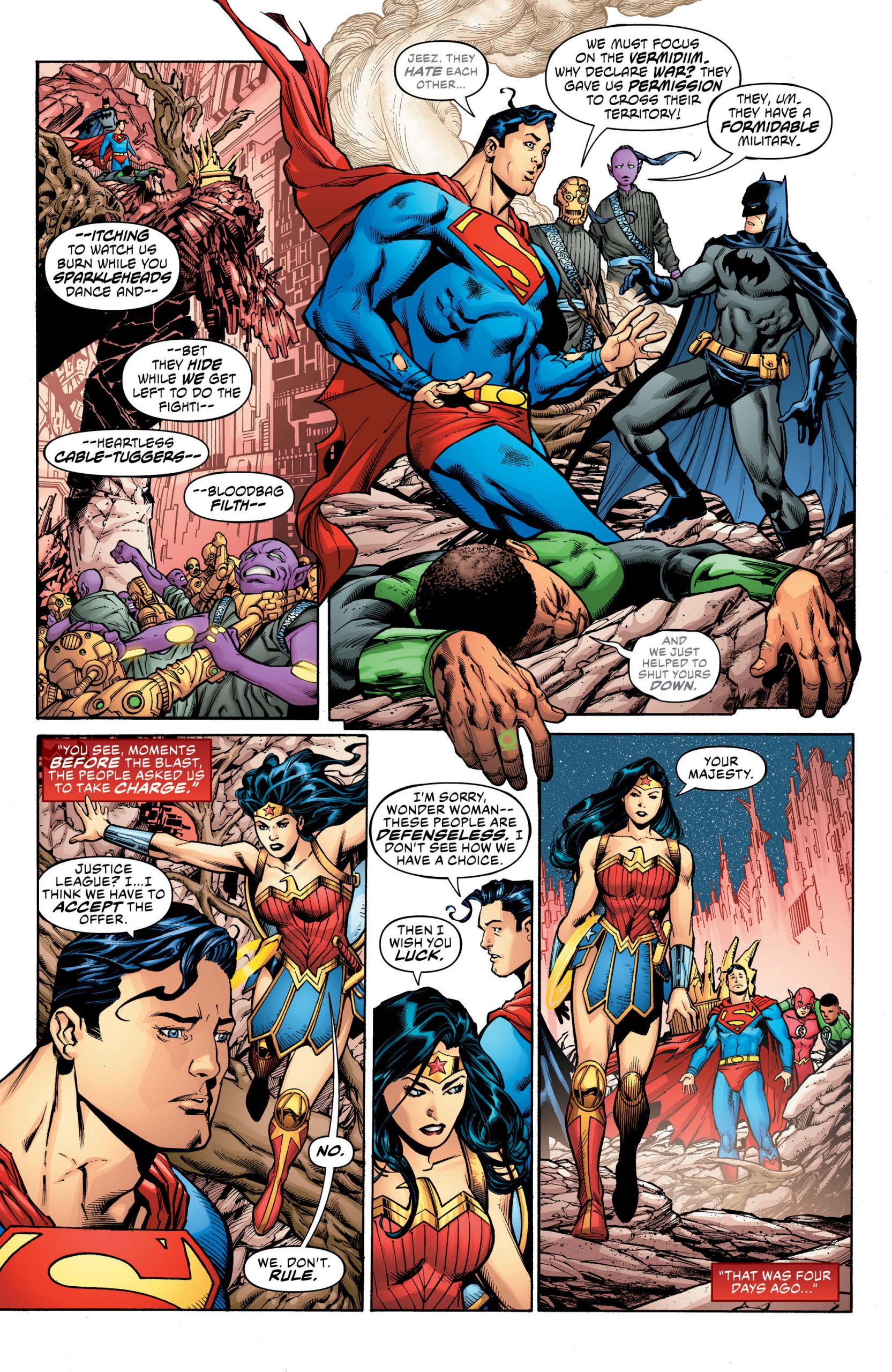 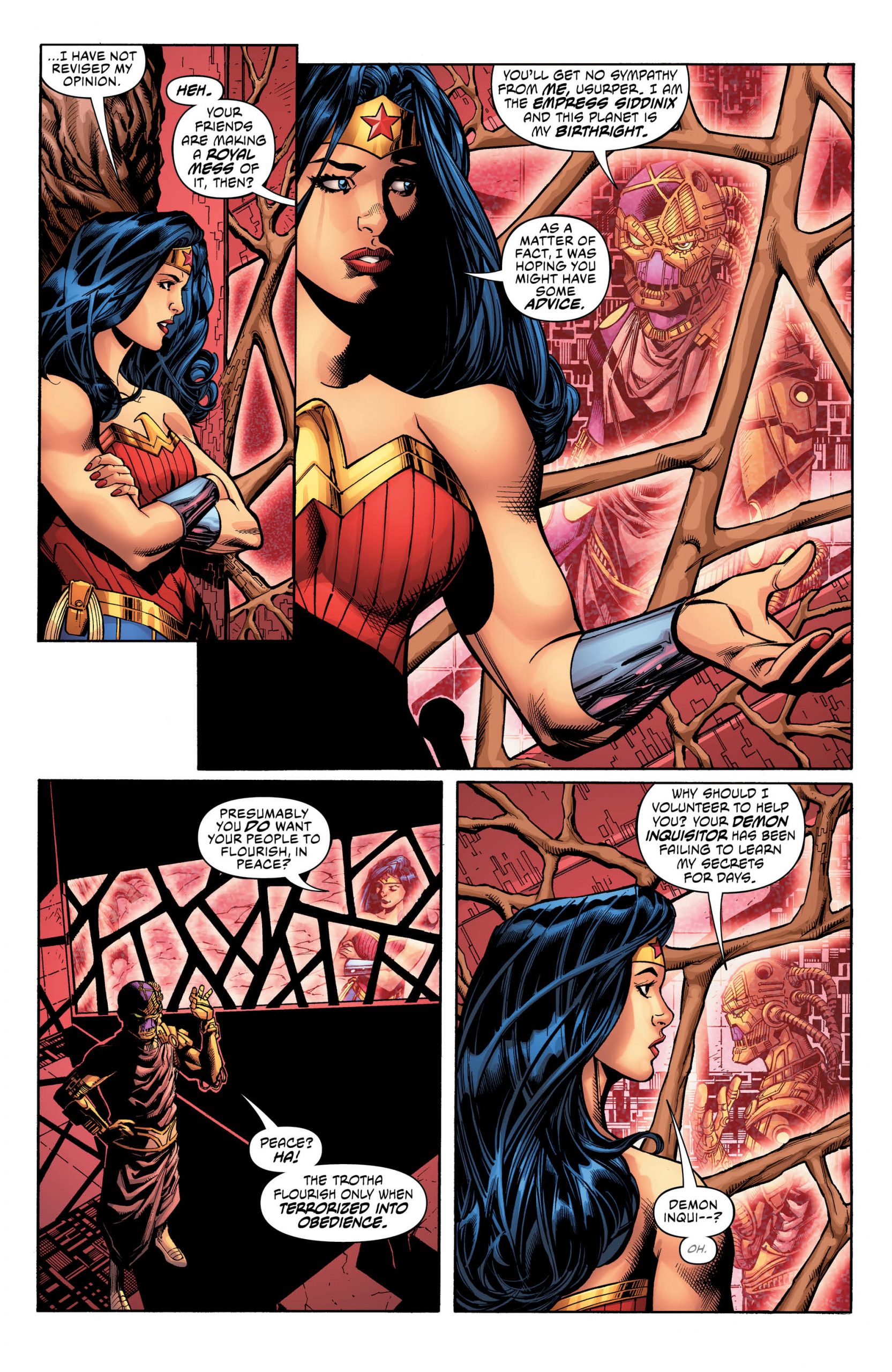 While this issue may sound heavy, Spurrier manages to keep things light, and humorous. For example, The Flash manages to interrupt a cannibalistic mating ritual. Not knowing that the Trotha’s limbs regenerate, The Flash assumes the worst and assaults an alien couple, who are just trying to get their freak on.

There’s also a fantastic moment where Green Lantern creates a Hamster Ball construct for The Flash to use when fighting in space. Yes, you read that correctly – The Flash hurls through the black void of space in a Hamster Ball, while fighting an army of aliens. The scene is amazing.

Recently, I decided to pick up a pencil and start drawing. Growing up, I was never great at art, but it’s quarantine, and I needed a new hobby. While drawing, I’ve learned two things: one, it’s hard, and two, I suck at it.

I say all of this because I may have been overly harsh on Aaron Lopresti in my last review. Upon looking at his work after my attempts to draw, I’ve come to the conclusion that Lopresti is actually quite talented. Don’t get me wrong – he’s not Francis Manapul or Scott Kolins, but his work is good. I’ve decided that anything that’s not overtly aesthetically offensive is actually quite good.

So, Aaron Lopresti, if by any random chance you’re reading this review, I’m sorry for being overly critical. You are an incredibly talented artist. Your work is dynamic, expressive, and imaginative. Thank you.

Justice League #49 is so much fun. I absolutely loved every moment of it. Si Spurrier is set to have one more issue, and I’m very excited to see how his story ends. Lopresti’s pencils are good, and he manages to carry a story that’s incredible. For a filler arc, “The Rule” is top-notch.