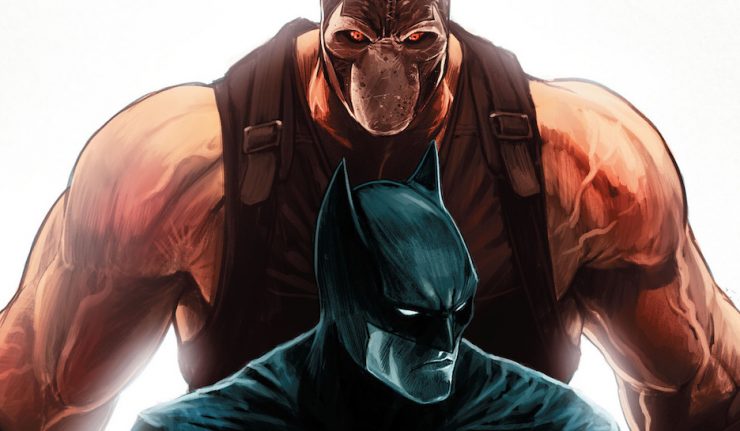 Bane is one of Batman’s deadliest enemies. While the Joker represents the chaos to Batman’s order, Ra’s Al Ghul matches Batman’s tactical mind, or the Riddler can match his intelligence, it’s Bane that can stand toe to toe both in mind and body with the Dark Knight. He’s a master tactician while also being physically bigger, stronger and faster than Batman. This is how he was able to be one of the only villains to break Batman both mentally and physically in Knightfall.

Ever since Batman: Rebirth #21 in June 2016, Bane has been behind the scenes to try and break the Bat again. This July, in Batman #75, his plans will be revealed in the “City of Bane” arc by Tom King and Tony S. Daniel.

Earlier this week, Newsarama sat down with Tom King to talk about the stories and issues that are leading up to Batman #75. Check out their interview below!

King: Bane doesn’t ever reward people. He’s not that kind of leader.

They are conforming to his required will, I think is the better way to put it.

Nrama: OK, so Psycho-Pirate is a bigger part of this than I realized?

Having Psycho-Pirate is like having an atom bomb in your hands, right? With Psycho-Pirate, you can control anyone. I mean, it’s been established in continuity that Psycho-Pirate can affect the most powerful entities in DC continuity.

It’s like, the only person we haven’t established who can not be manipulated by Psycho-Pirate is the Ventriloquist, who’s also in that room.

Nrama: Yeah, I have a couple theories on why Bane would have Ventriloquist there. But why is Skeets there? Is he just there to represent the story we saw in “The Gift,” or is there more to his presence?

King: The reason for everyone, why everyone is in that room, and what was accomplished by that sort of – for lack of a better word – “team” coming together will all be revealed in “The Fall and the Fallen.”

You’ll hear what Bane’s been doing for the last 74 issues before “City of Bane” starts.

Nrama: And then “City of Bane” is eight issues? So it takes you toward issue #100, doesn’t it?

King: Yeah. It takes us up to the mid-80s, and not too far after that, we have to finish up. So we’re almost there.

This is the big, climactic moment. This is the … I’m going to sound like a stupid nerd, but Wolverine in the basement of the Hellfire Club saying, “Now it’s my turn.” That’s what issue #75 is. Or Daredevil saying, you know, Kingpin, you shouldn’t have signed this. That’s that moment.

Bane has taken everything from Batman — he has taken Batman to the ground. But as we’ve seen in this series, Batman’s a guy who gets up and says, “I’m still here.”

Nrama: You’ve said before that Selina is going to be part of what’s coming up in Batman #50. So thanks to this realization that Batman has after all these “Knightmares,” will we maybe see the awful ending of issue #50 resolved in upcoming issues?

Nrama: This next issue is drawn by Yanick Paquette. You’ve worked with some great artists in the “Knightmares” arc. But then the “Fall and the Fallen” brings back your regular team, right? And then Tony Daniel comes on for “City of Bane”?

King: One of the reasons the “Knightmares” arc was crucial to this whole thing is we could get our guys ahead. The team moving forward will be Jorge [Fornes] and Mikel [Janín] will do “The Fall and the Fallen.” I think everyone is seeing Jorge as this superstar, return of the sort of classic, Alex Toth Batman. And then Mikel, who’s been there since issue #1, and will be there to issue #100, has been the spine of this entire series.

And then with issue #75, Tony Daniel returns to do, I think, the best work of his life. I mean, I can’t speak highly enough of what Tony’s doing on this book. It’s this huge, epic storytelling. To me, it looks as good as the best Marvel or DC event book. I mean, it’s that big and cool.
And then eventually, Clay [Mann], when he finishes with Heroes in Crisis, will come back.

Those will be our four artists as we go forward — Jorge, Mikel, Clay, and Tony.

Those are the best artists in comics, so I’m doing fine.

Bane makes his return to Gotham this July in Batman #75 when “City of Bane” begins. Are you excited to see Bane try and break the Bat? Let us know!