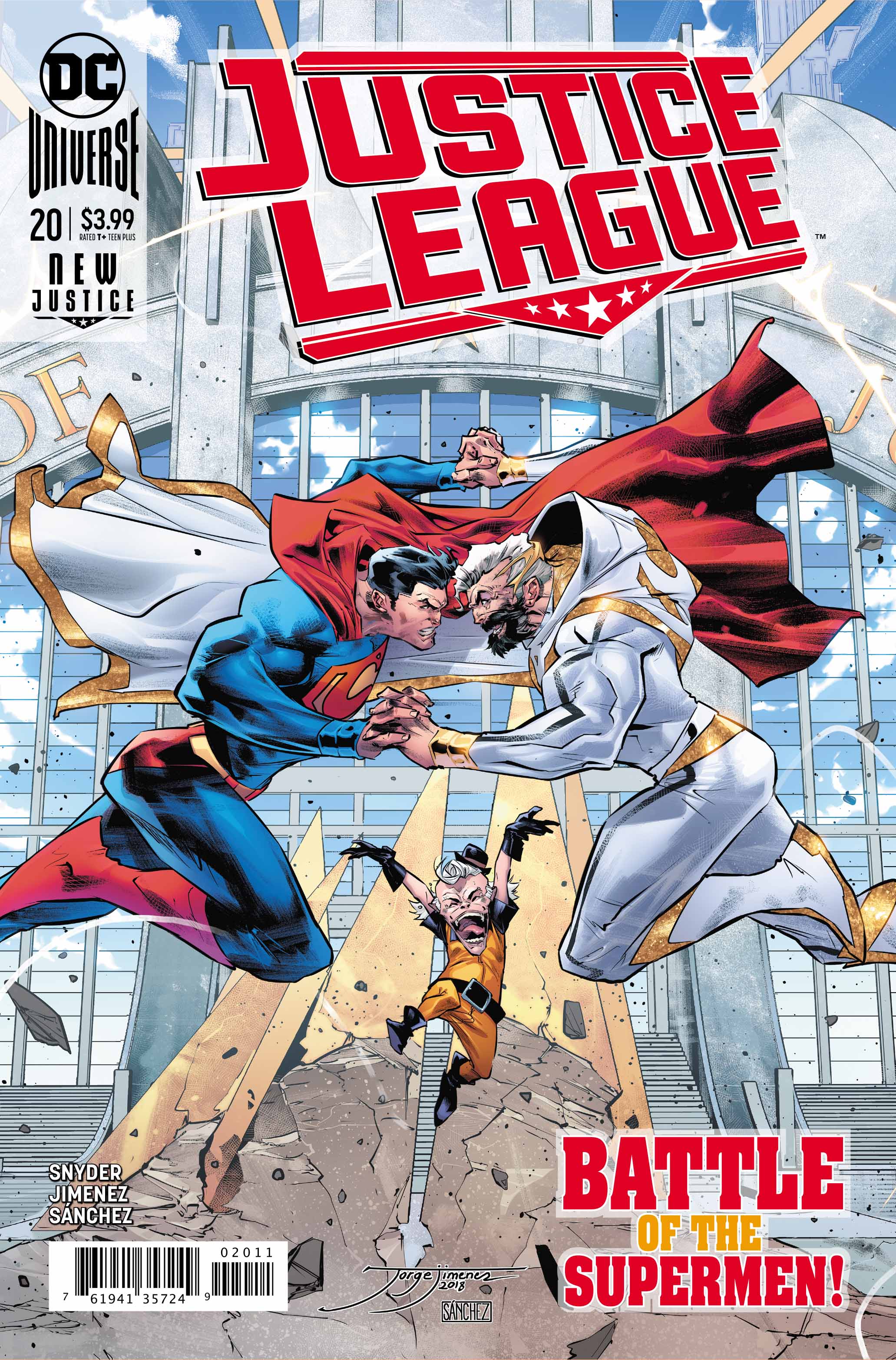 Everything is rainbows and sunshine in this week’s Justice League #20… or is it? This week the League experiences the wonders of the Sixth Dimension, but everything isn’t as it seems.

Last issue, a desperate Justice League turned to Mr. Mxyzptlk, a magical Fifth Dimensional Imp, for help in fixing the broken Multiverse. Accordingly, Mr. Mxyzptlk complied by opening a door to the Sixth Dimension: a cosmic control room where the multiverse was designed and set in motion. Upon entering, the portal transported Superman to a dark, barren, dust-ridden world. However, when the rest of the team re-opened the door, they were greeted by what looked like the League of the future.

Justice League #20 picks up where #19 left off. This future Justice League lives on a more evolved, liberated, peaceful planet, where strife has been eliminated. While showing the Justice League of the past around the future Home of Justice, Superman of the future confirms a new aspect of DC Cosmology: the Omniverse. While this idea was hinted at in Multiversity, Convergence, and Metal, future Superman confirms that there are multiple Multiverses in the DC Omniverse.  Future Superman continues to explain that the League’s multiverse must be liberated from Perpetua and aided in its evolution.

Snyder and Jimenez compose a compelling story shrouded in shadows. Although this future looks Utopian, most members find it unsettling. Questions arise for both the reader and the League. First, why and how does Earth 1 end up in the Sixth Dimension? Also, where’s the Legion of Doom in this utopia? Or the other celestial deities that were supposed to inhabit the realm? Then there’s the question about past Superman. Why was he transported to a barren world? Why is he unable to fly away?

Essentially, questions take center stage in Justice League #20, thereby pushing the narrative forward, while action takes a back seat. As per usual, the last page ends with a cliffhanger, and in keeping with the rest of this issue, the cliffhanger poses a mind-bending question. 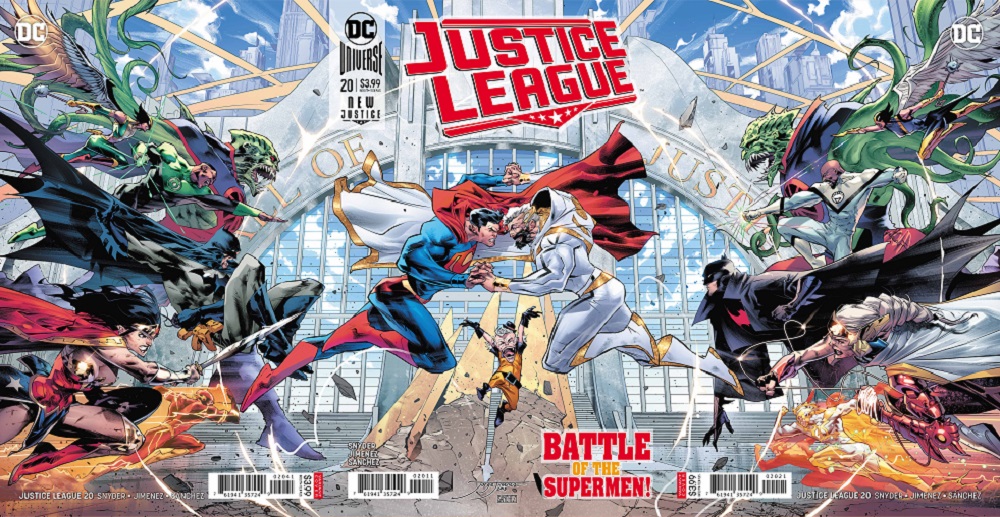 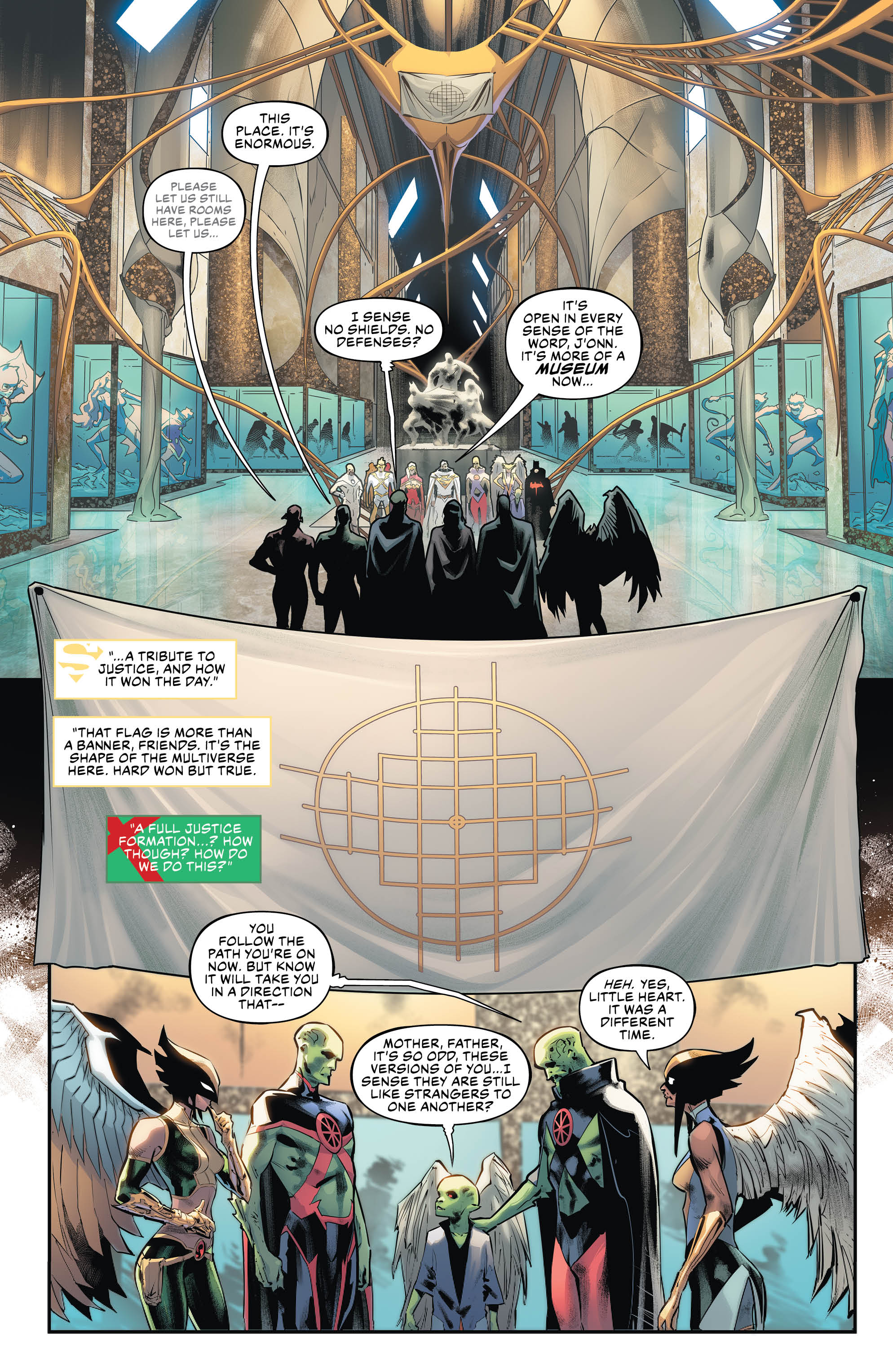 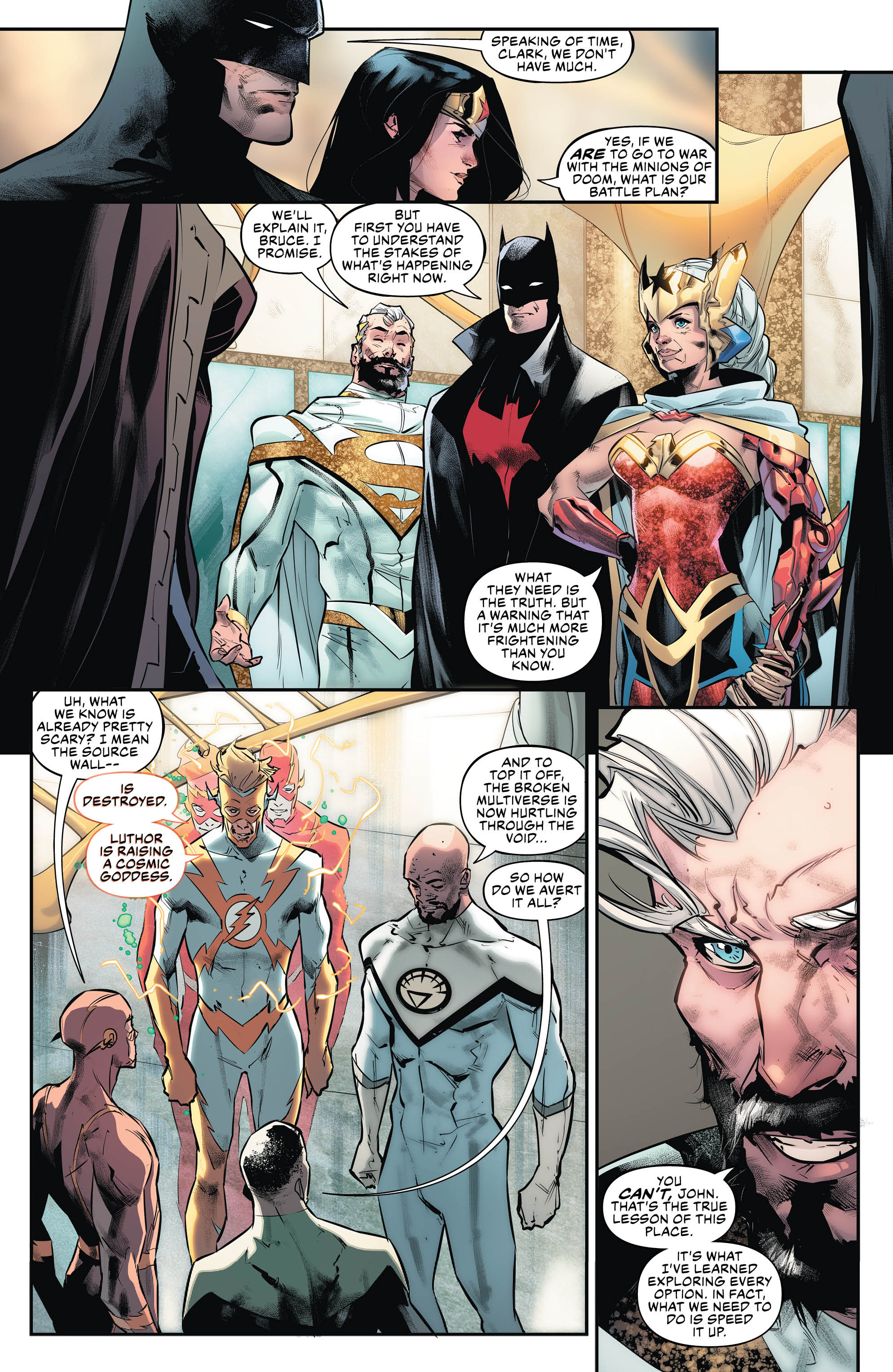 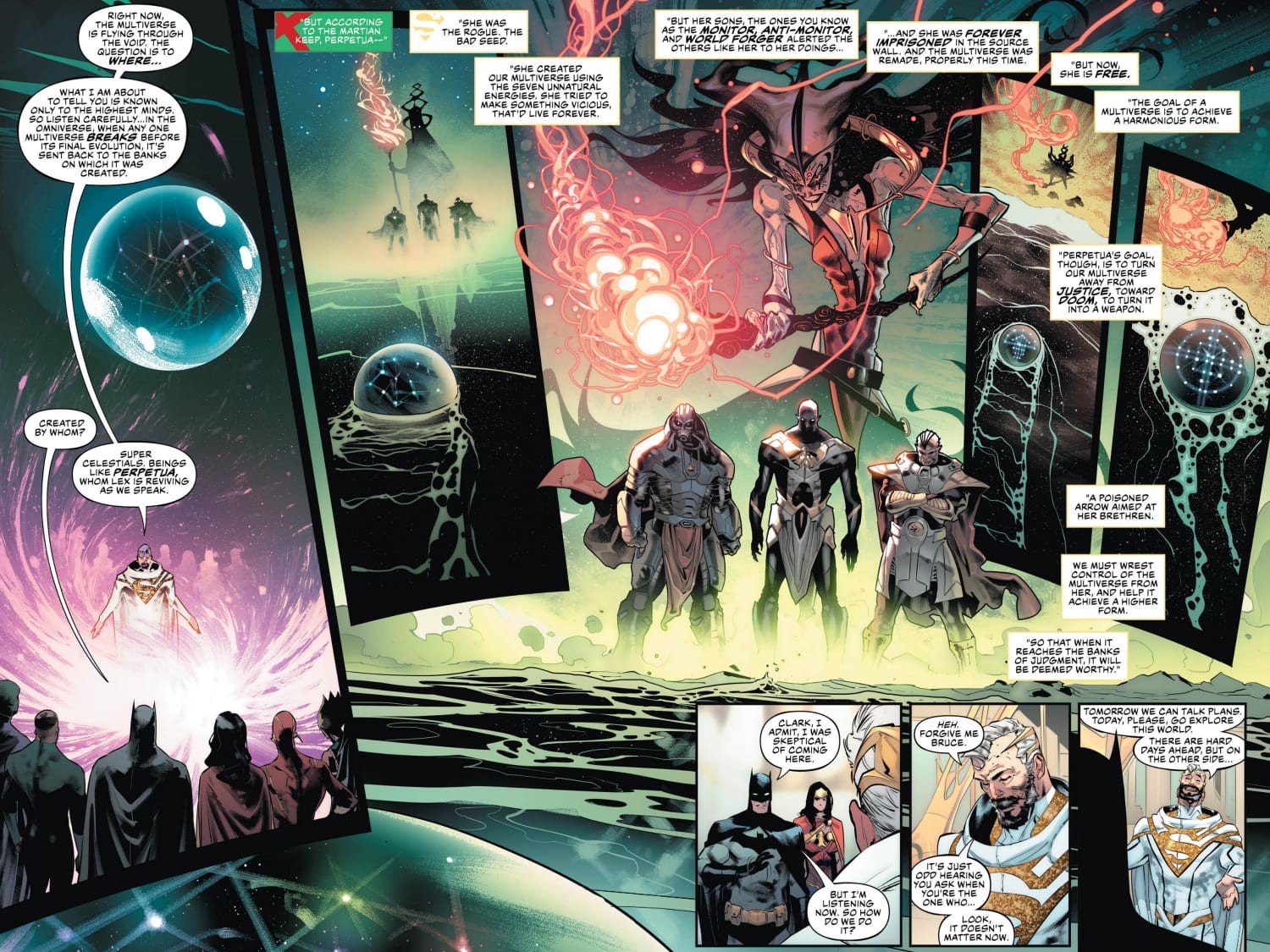 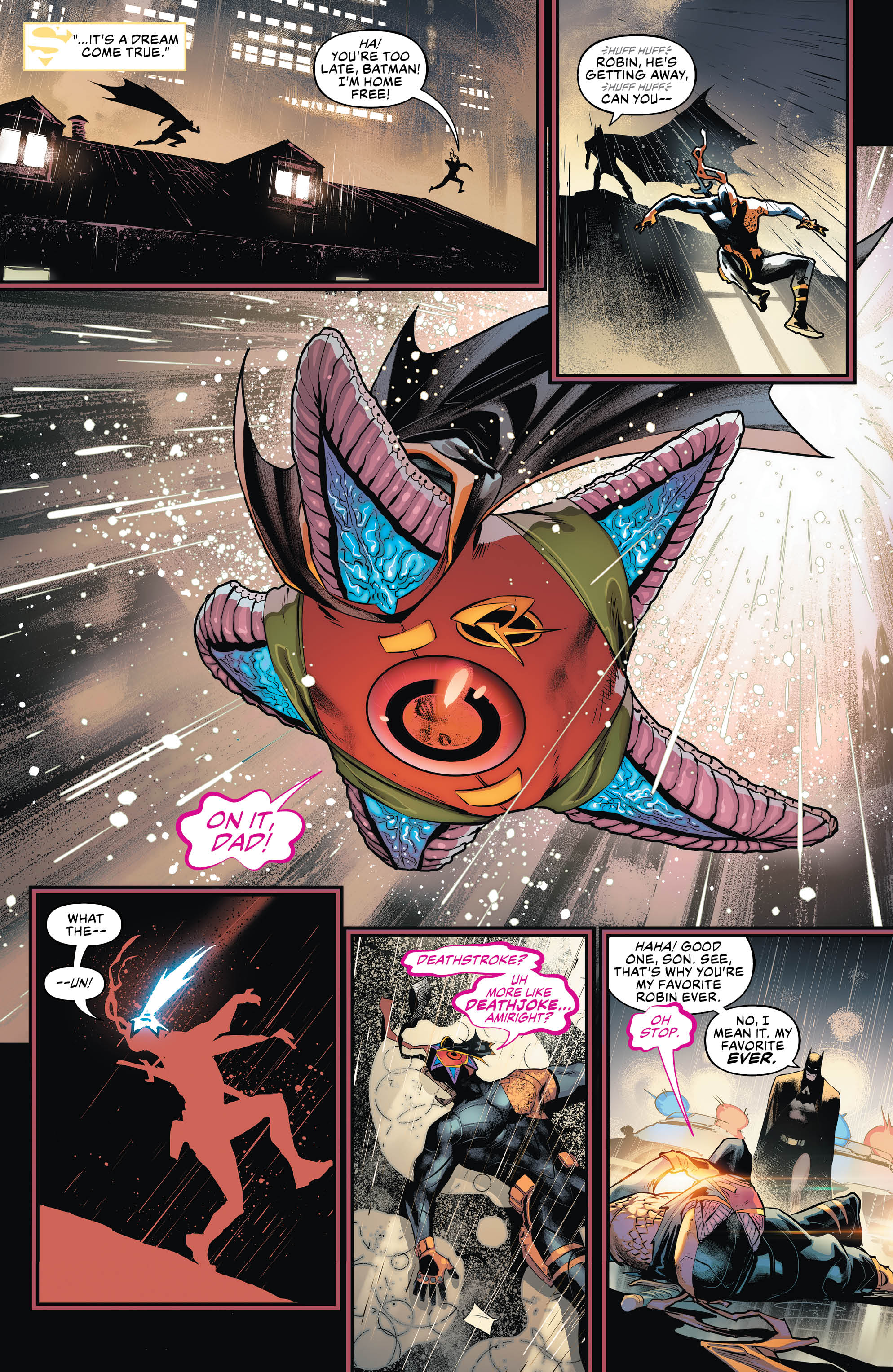 Jimenez’s pencils are fantastic in this issue. As the League traverses through the paradise of the Sixth Dimension, each character (with the exception of Past Superman) experiences the joys of their heavenly lives. Jimenez does a great job conveying the League’s expressions; their emotions are palpable, but not hyperbolic.

Jimenez also provides a cosmic two-page spread that’s stunning. While the script does a solid, albeit minimal (which is probably intentional), job explaining this new facet of the DCU’s cosmology, Jimenez’s art adds a new layer of mystery/complexity to the story. The artist utilizes the seven-energy symbol of the Totality in an interesting way, to explain the evolutionary process that worlds experience in the Sixth Dimension. Overall, his pencils truly compliment the script.

Justice League #20 is grandiose and cosmic, yet simultaneously human. Amidst the high-concept, convoluted cosmology, there’s a really beautiful, human tale about hope and reality. Justice League #20 has the emotional impact of Alan Moore’s famous Superman story “For The Man Who Has Everything”, but the issue’s scope is much larger. It’s cathartic to see the League happy after nineteen issues of tragedy and stress. And while the other shoe will undoubtedly drop next issue,  Justice League #20 is a beautiful chapter that poses the question “What if everything turns out alright?” Final Verdict: give it a read.