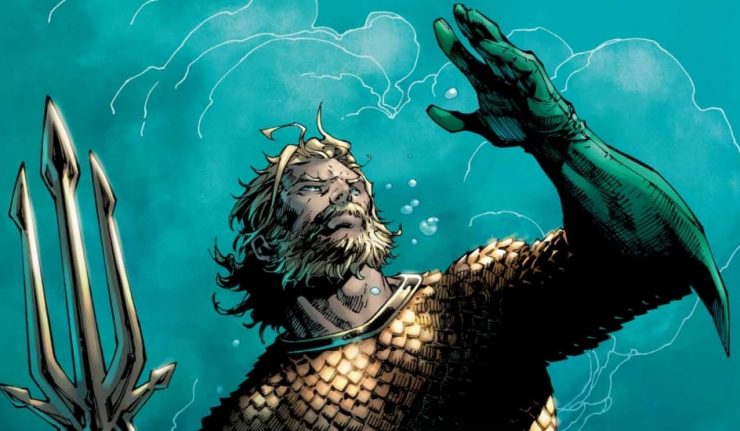 The sky begins to fall in Justice League #10, as Scott Snyder and Francis Manapul deliver a stunning prelude to what looks to be an epic crossover event: “Drowned Earth.”

Although it’s firmly a Justice League story, Drowned Earth finds its origin at the crossroads of the Aquaman and Wonder Woman franchises. Justice League #10 opens with Aquaman, Wonder Woman and Firestorm searching the Arctic Circle for an ancient Atlantian vessel. Poseidon (who was murdered by Black Manta and Cheeta in issue #8) left the League a bottled ship that bears the mark of Arion – the first hero of Atlantis. This bottled ship has led the League to the Arctic, as the team search for the Graveyard of the Gods.

Snyder uses this scene to build the basic background mythos of the story to come. Arion was a great Atlantean who was a friend to all (including the Amazons). He protected Atlantis before it sank into the ocean. With the aid of Poseidon, Arion built a cosmic conch (or beacon) called the Clarion. This device sent a signal out into the cosmos, reaching out to other aquatic worlds. After sending this signal, friendly divine beings appeared as did hostile alien invaders. An ancient war ensued, and the invaders were defeated.

Noah’s Ark the Sequel… With Aquazombies!

Meanwhile, Superman, The Flash, and Adam Strange are investigating the potential location of the Legion of Doom’s headquarters. Their search has brought them into a confrontation with an army of volcano men. During this scrap, they notice that a beacon had been fired from their location into space.

It would seem that this beacon was Arion’s Clarion. A giant liquid space Kraken then suddenly appears and attacks Wonder Woman, Aquaman, and Firestorm. A portal opens up, transporting Aquaman into the presence of the aforementioned alien invaders who now have returned. It turns out these aliens invaders have plans on flooding the earth with a special alien water that will turn everyone into mindless sea monsters. 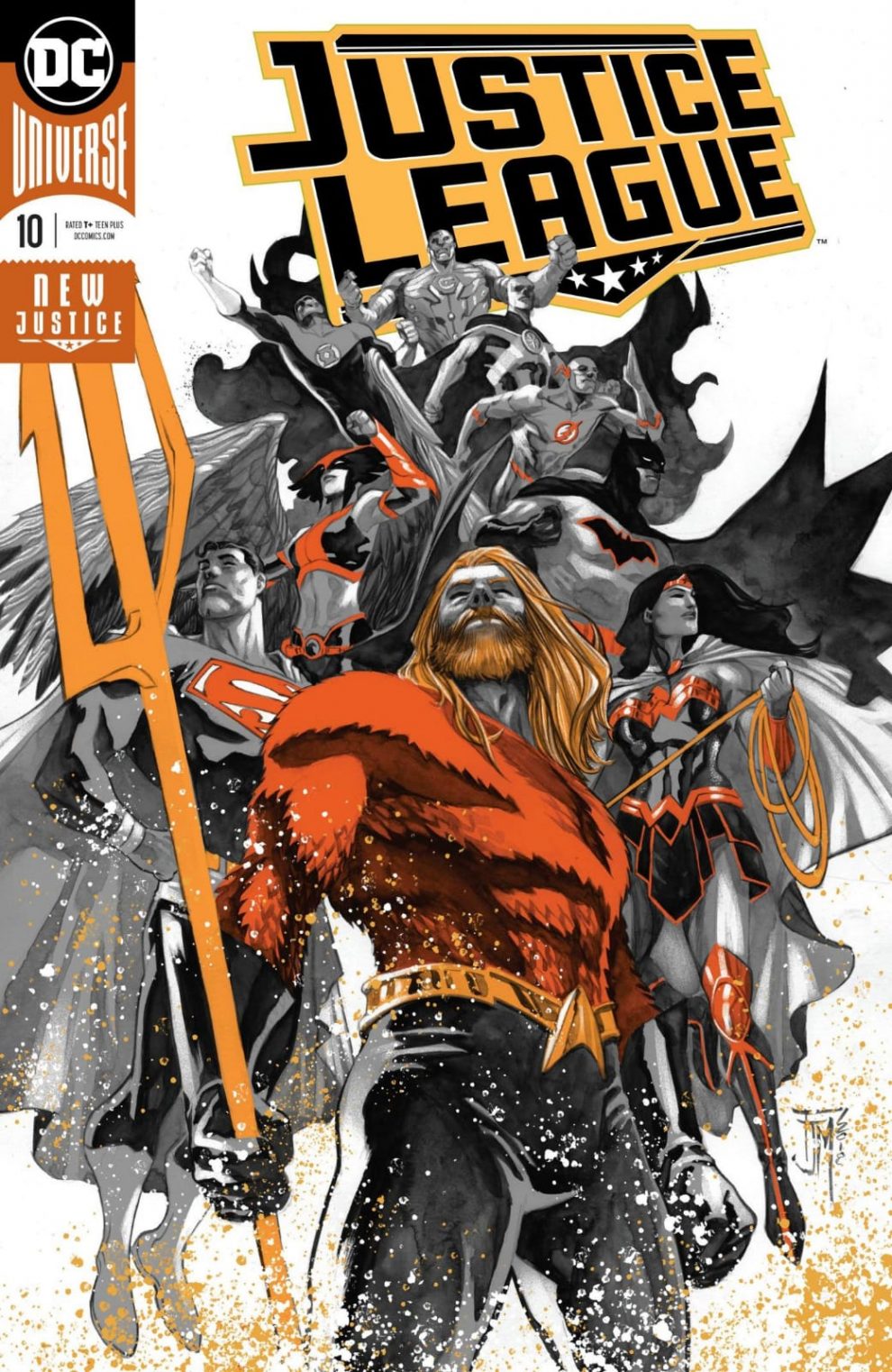 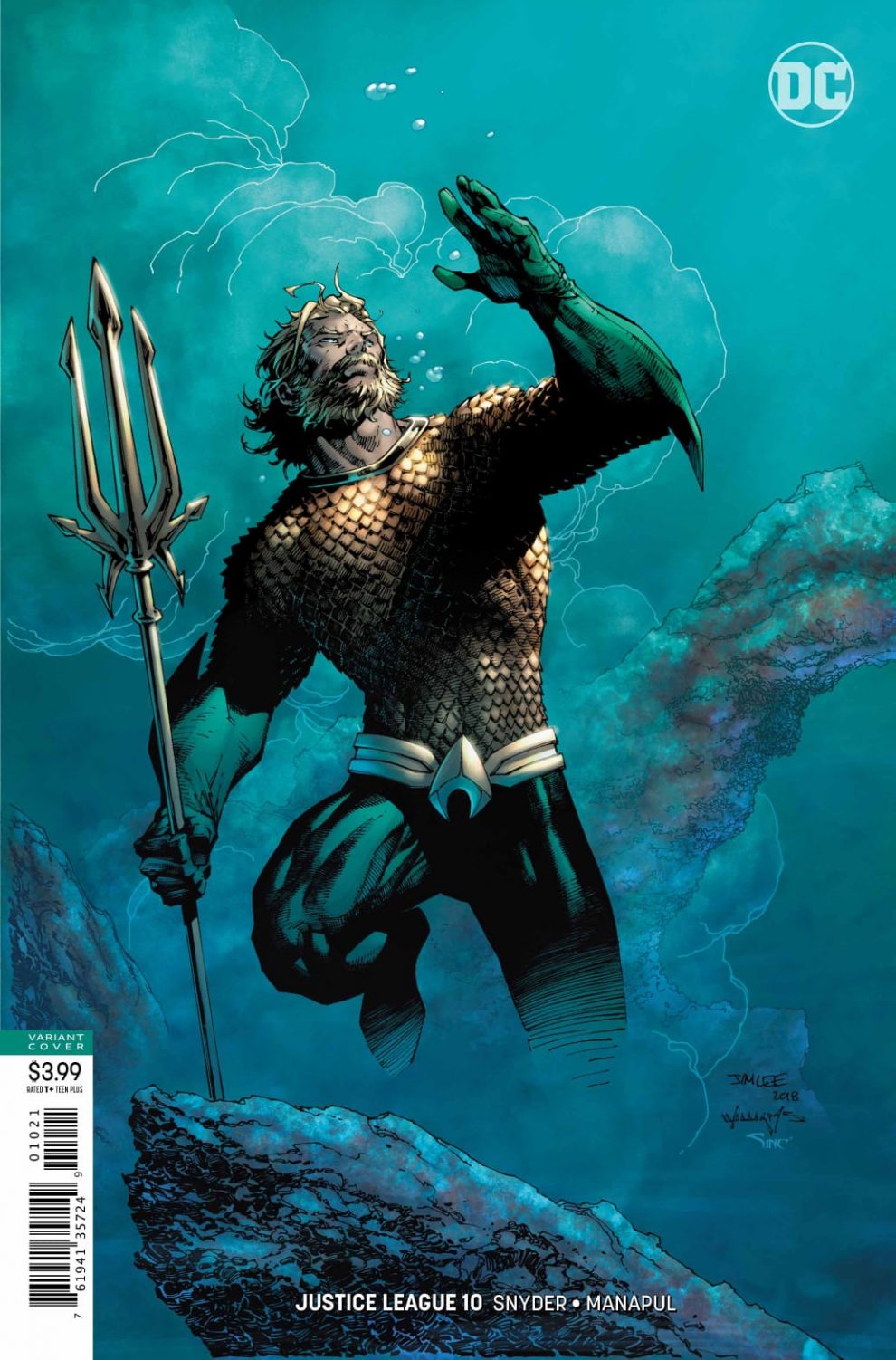 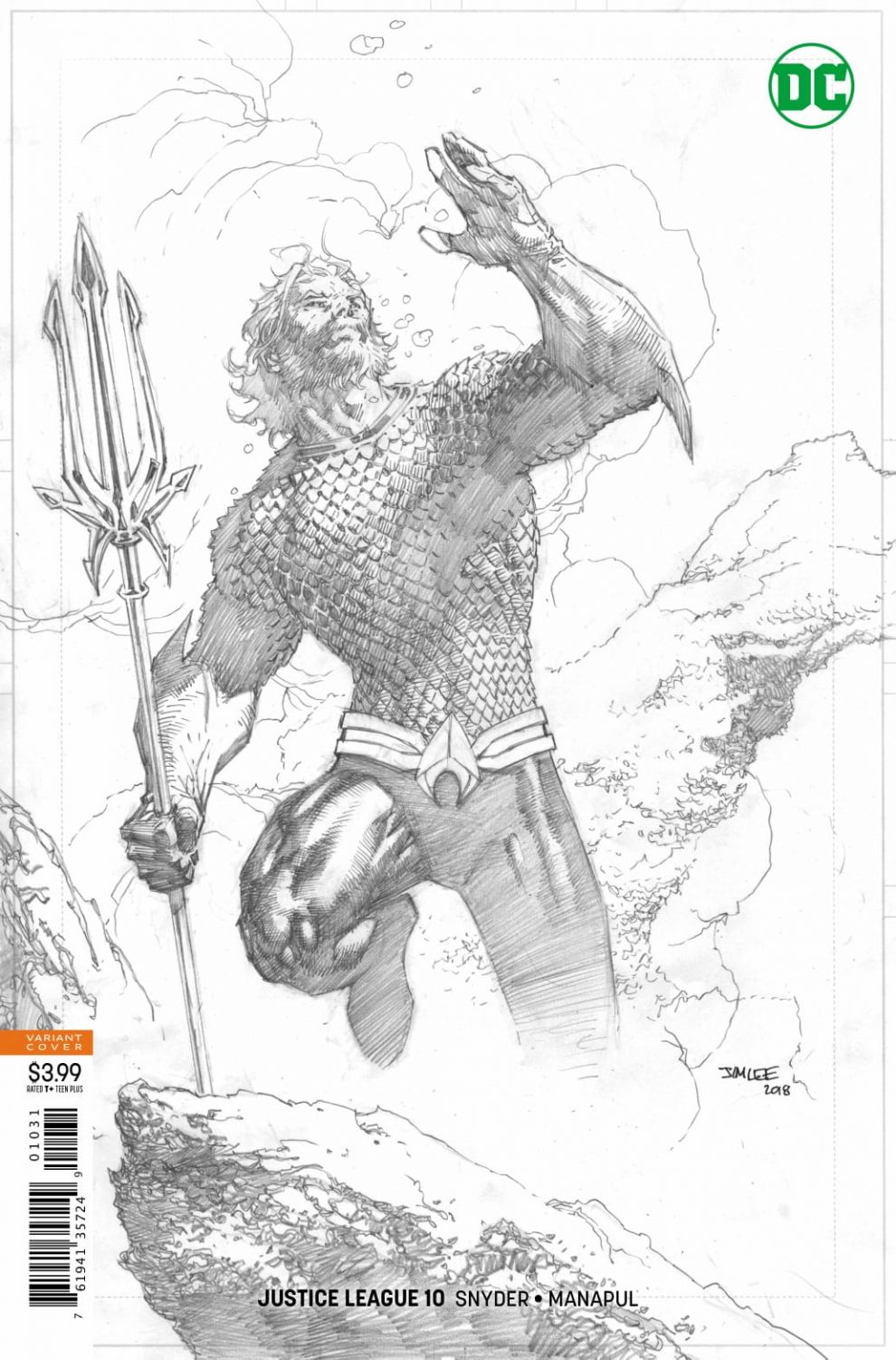 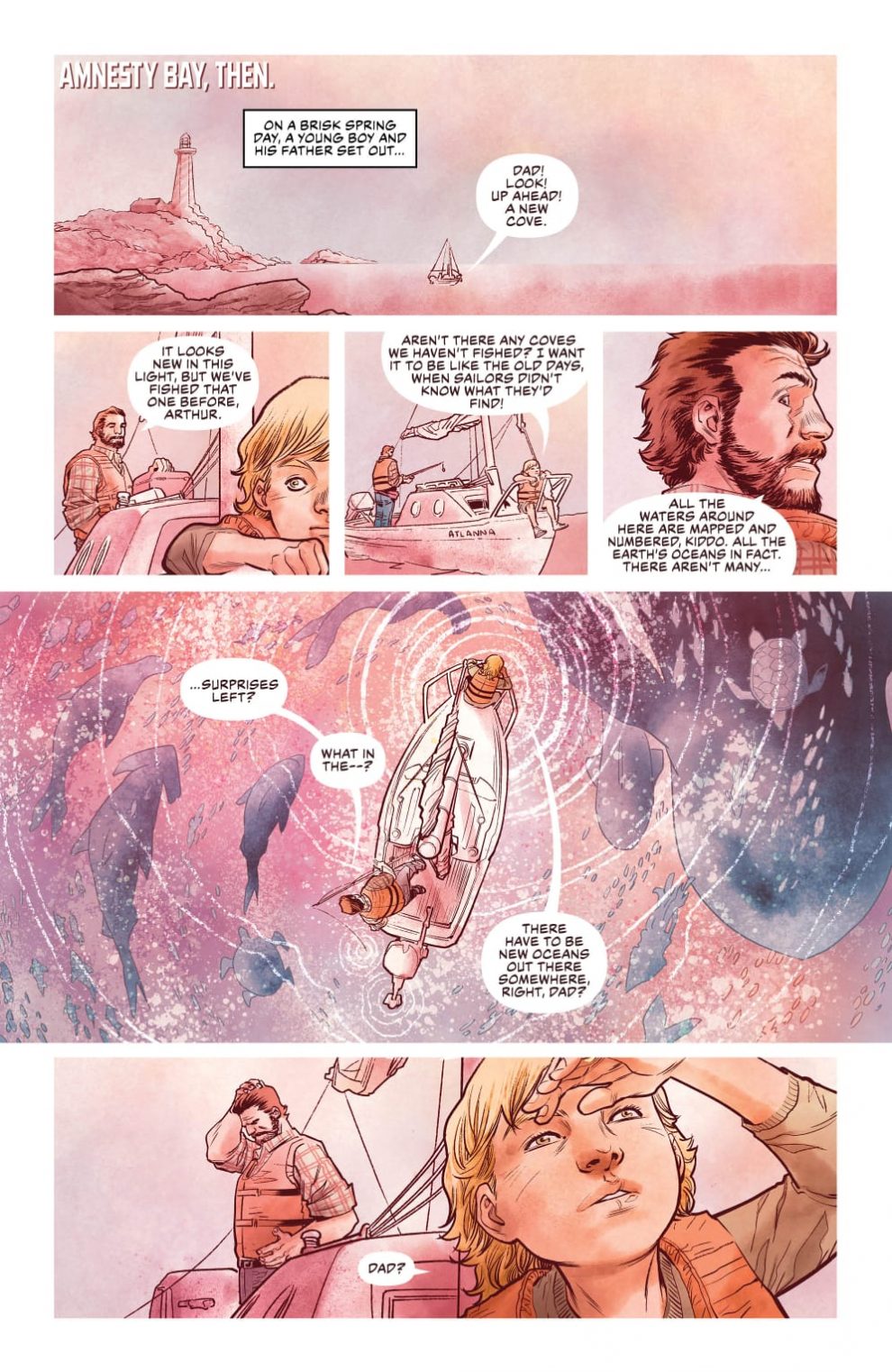 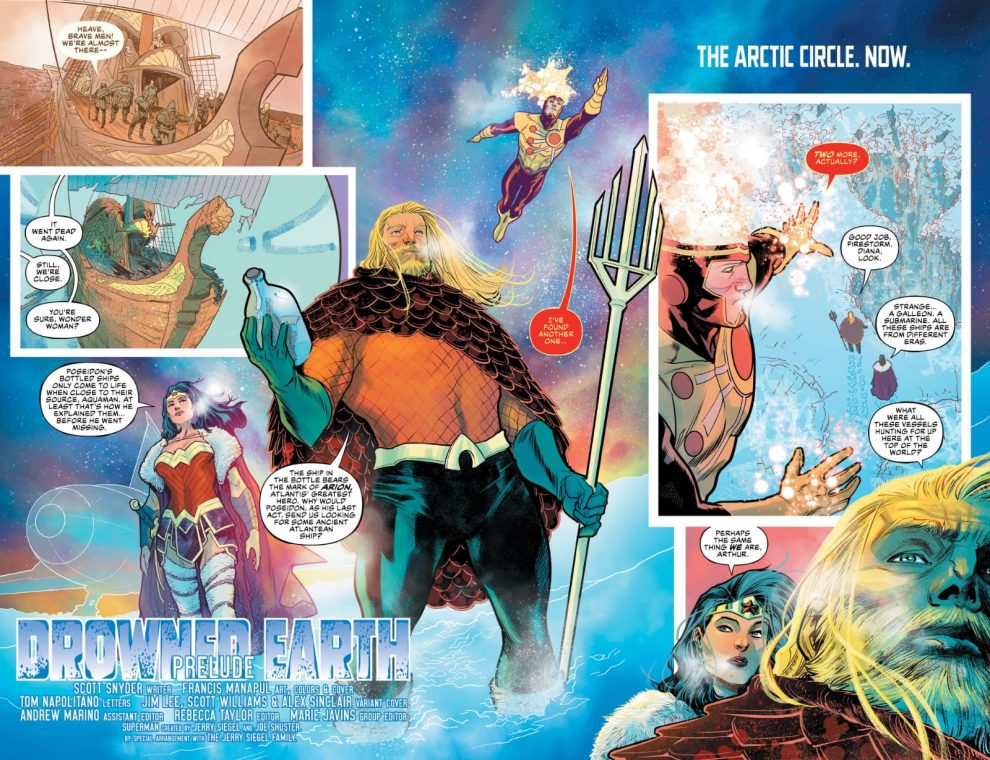 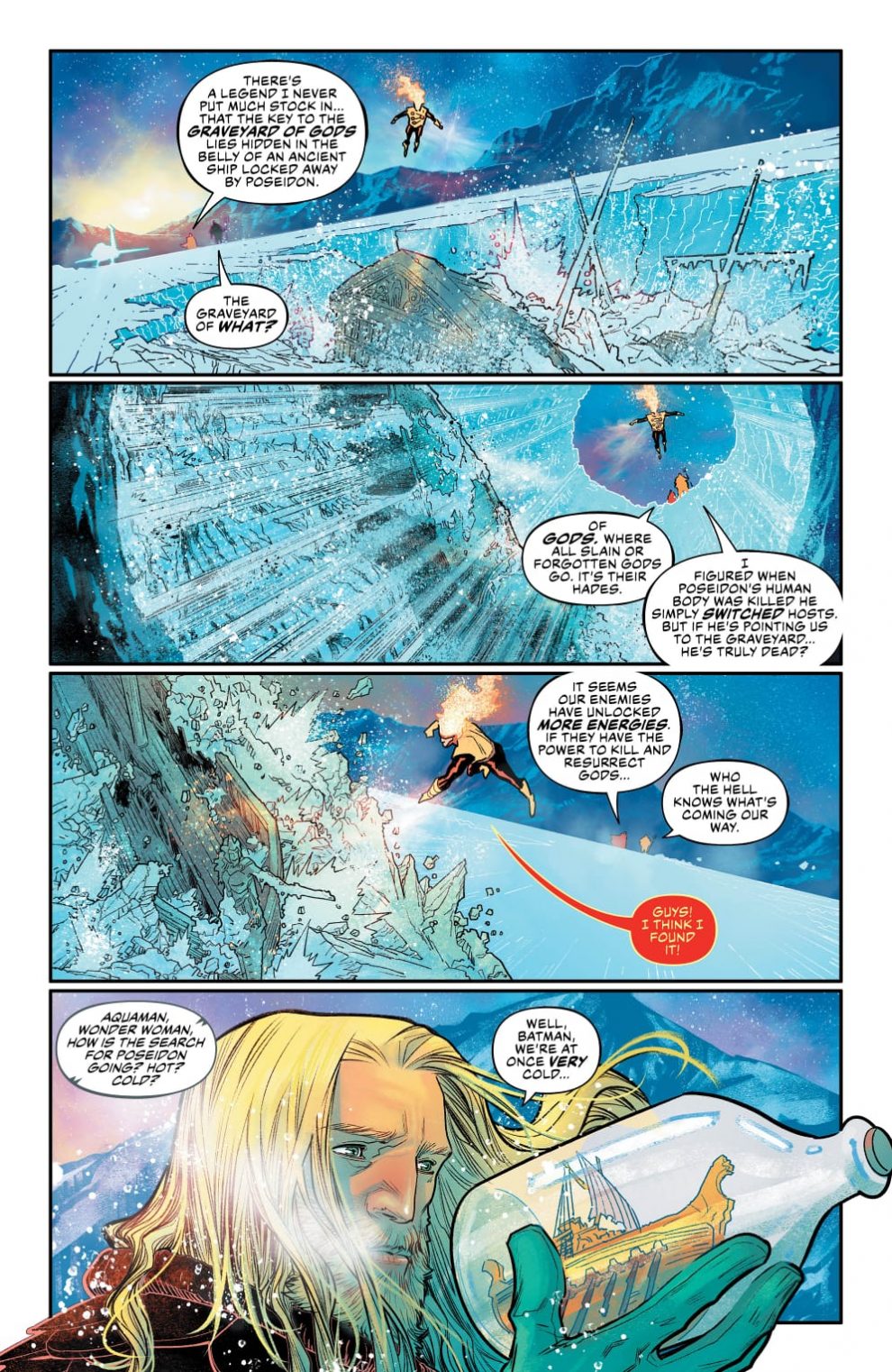 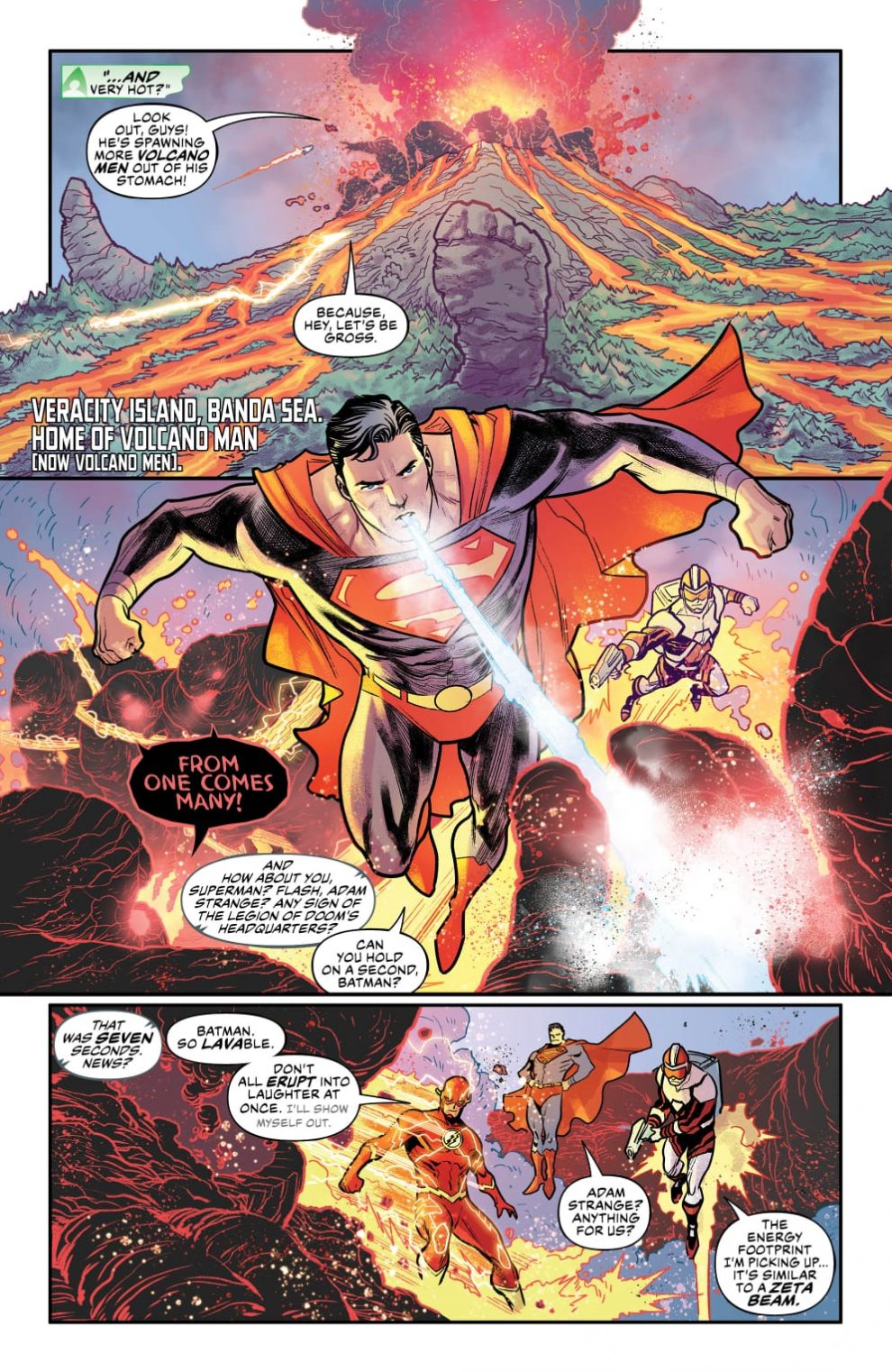 I cannot think of an issue that is more typical Scott Snyder than Justice League #10. Heavy scripting, epic world building, mytho-operatic storytelling, Aquazombies: all the trademarks are there. Synder does a wonderful job pacing the story. While often setups run the risk of exposition dump, Justice League #10’s script well-structured, as it intersperses plot seeds with character moments and action sequences.

Another strength of Synder’s script is his characters’ voices, a hallmark of Snyder’s tenure on the title. Whether it’s Batman’s curmudgeonly growl, The Flash’s corny humor, or the third-person omniscient narrator’s stoic tone, Snyder knows his characters and writes them with mastery execution.

Francis Manapul Can Do No Wrong!

Justice League #10 is visually stunning, as Francis Manapul has produced some of the most beautiful comic book artwork I have ever seen. His lines are kinetic, carrying an energy that propels the reader from panel to panel. Characters and backgrounds are rendered in exquisite detail that highlights Manapul’s unique style.

While Manapul’s pencils are a wonder to behold in and of themselves, what truly brings his work to life is his coloring. Manapul is very distinct in his use of color, making use of beautiful pastels that radiate from light to dark. The contrast is exquisite – just like anything that Manapul touches.

Justice League #10 is a fantastic prelude, setting the stage for what looks like a fun story. Snyder weaves a beautiful tale of intrigue, pulling on both Greek and Atlantian myth. Manapul brings Snyder’s imagination to life with the artistic mastery of a comic book legend. Justice League #10 is astoundingly fun and breathtakingly gorgeous. Also, did I mention there were Aquazombies? Check. It. Out.