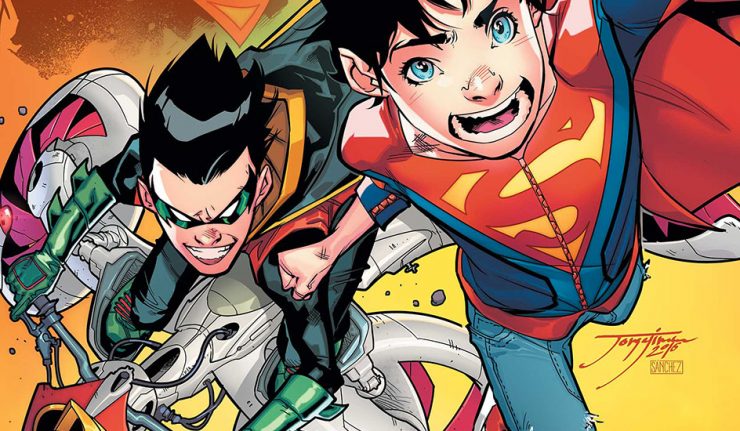 Despite the popularity of the Super Sons comic book series by Peter Tomasi and Jorge Jimenez, DC Entertainment announced they were cancelling the title in February. With the last issue, Super Sons #16 due to hit shelves on May 30.

Launched in 2017, the series followed the continuing adventures of the Jonathan Kent, son of Clark Kent and Lois Lane, and Damian Wayne, son of Batman. The pair were described as “Best frenemies forever.”

At the time of the announcement, Peter Tomasi jumped on Twitter for crowd control, teasing that the Super-Sons would return in some capacity.

Wow! The love and sadness for Super Sons being cancelled is knocking me out! So, before too much time passes let me be the first to tell you that I’m not done with our two favorite boys and new news will be forthcoming soon! pic.twitter.com/UzIyRJaqjk

Good Crikey my Twitter account is exploding! Brothers and sisters, keep thinking good things! It is not being cancelled for bad sales. There are plans afoot I can’t share at this early juncture but you will be happy with the results – Super Sons lives!

Since then, fans had to just wait for news. Well, patience is a virtue because five months later, they got some very good news. On a Tweet promoting the upcoming Death of Superman animated movie, also written by Tomasi, Michael Shelling, Director of Publicity at DC announced a new maxiseries.

And the mega-talented @PeterJTomasi is returning to Super-Sons in a Super-Sons/Dynomutt Special on May 30 AND a 12-issue maxiseries, ADVENTURES OF THE SUPER SONS, on August 1!!!

Starting August 1, we’ll be getting a new 12-issue series called Adventures of the Super Sons. Peter Tomasi is returning to script it, however, there is no current word on the artist for the series. Jorge Jimenez will be too busy working on the new Justice League series with Scott Snyder and Jim Cheung. However, it doesn’t mean he can’t do double duty. It’s unlikely, but it’s still possible. Aside from the tweet, there aren’t a whole lot of other details regarding the new maxiseries, but we’ll be sure to update you when we get more information.

Until then, Super Sons #16 and Super Sons/Dynomutt Special #1 will hit shelves on May 30.