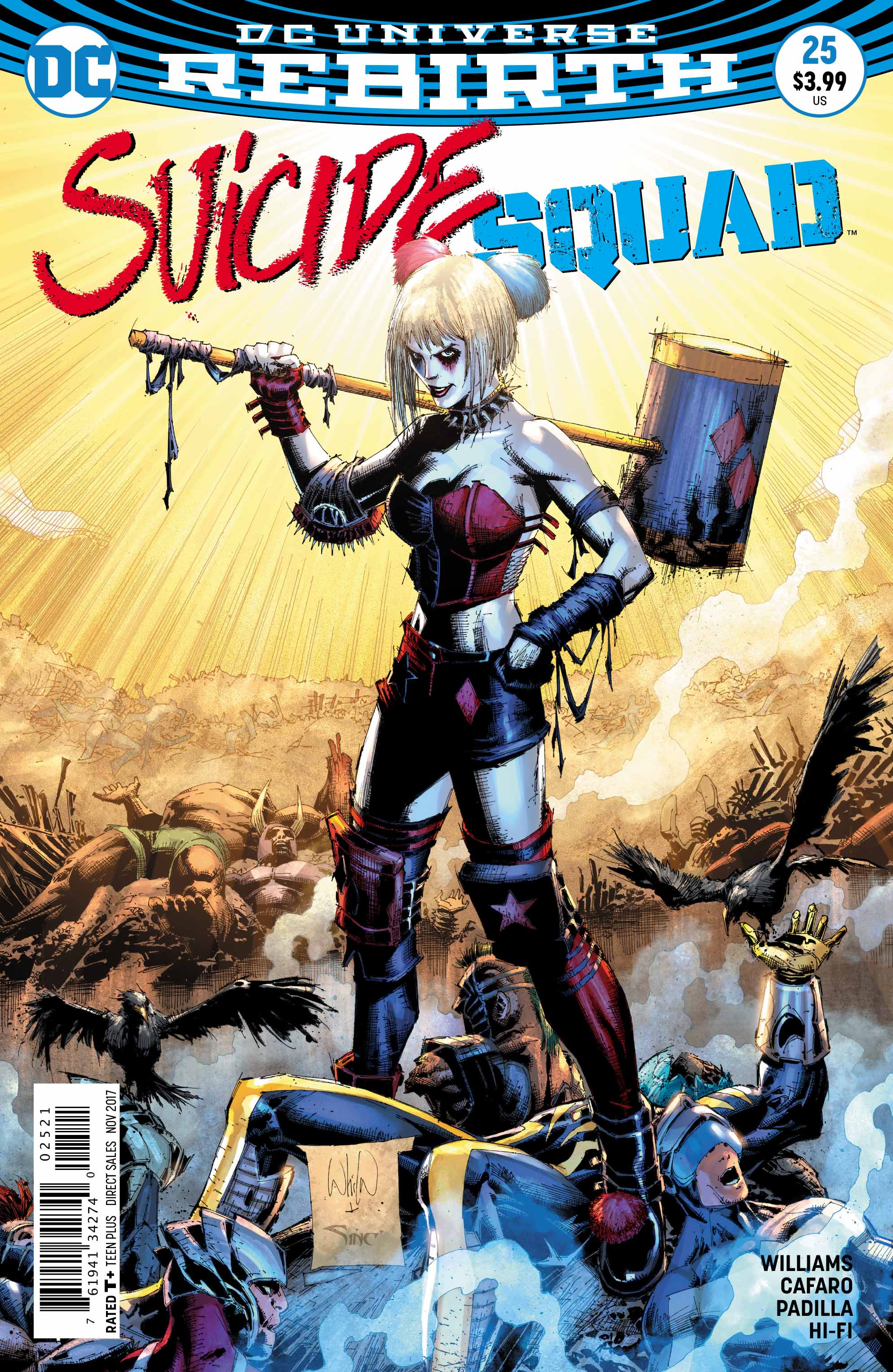 The fifth and final chapter of “Kill Your Darlings” is a high-octane finale to the story. It’s also a terrific way to end the first year of DC’s “Rebirth”.

Usually we’d only get 12 issues of any given title in a year, but Rob Williams and his collaborators have turned out over twice as many. The most impressive part is that they have not scrimped on the quality, and delivered some truly excellent comics.

This bumper-sized offering lays to rest Karla and his group “The People” and ties up many of the plot threads sown, right from issue #1. Amanda Waller’s ruthlessness, Harley Quinn’s sociopathic tendencies, and Katana’s heroism are all brought to the forefront this issue. Rob Williams’ characters are well researched, well fleshed out, and superbly written.

He closes the issue – like he always does – with another jaw-dropping surprise, and the shocking revelation of not one, but TWO returning cast members. Don’t worry, this isn’t a spoiler. If you can guess who’s back, then you have psychic abilities beyond those of any comics character! 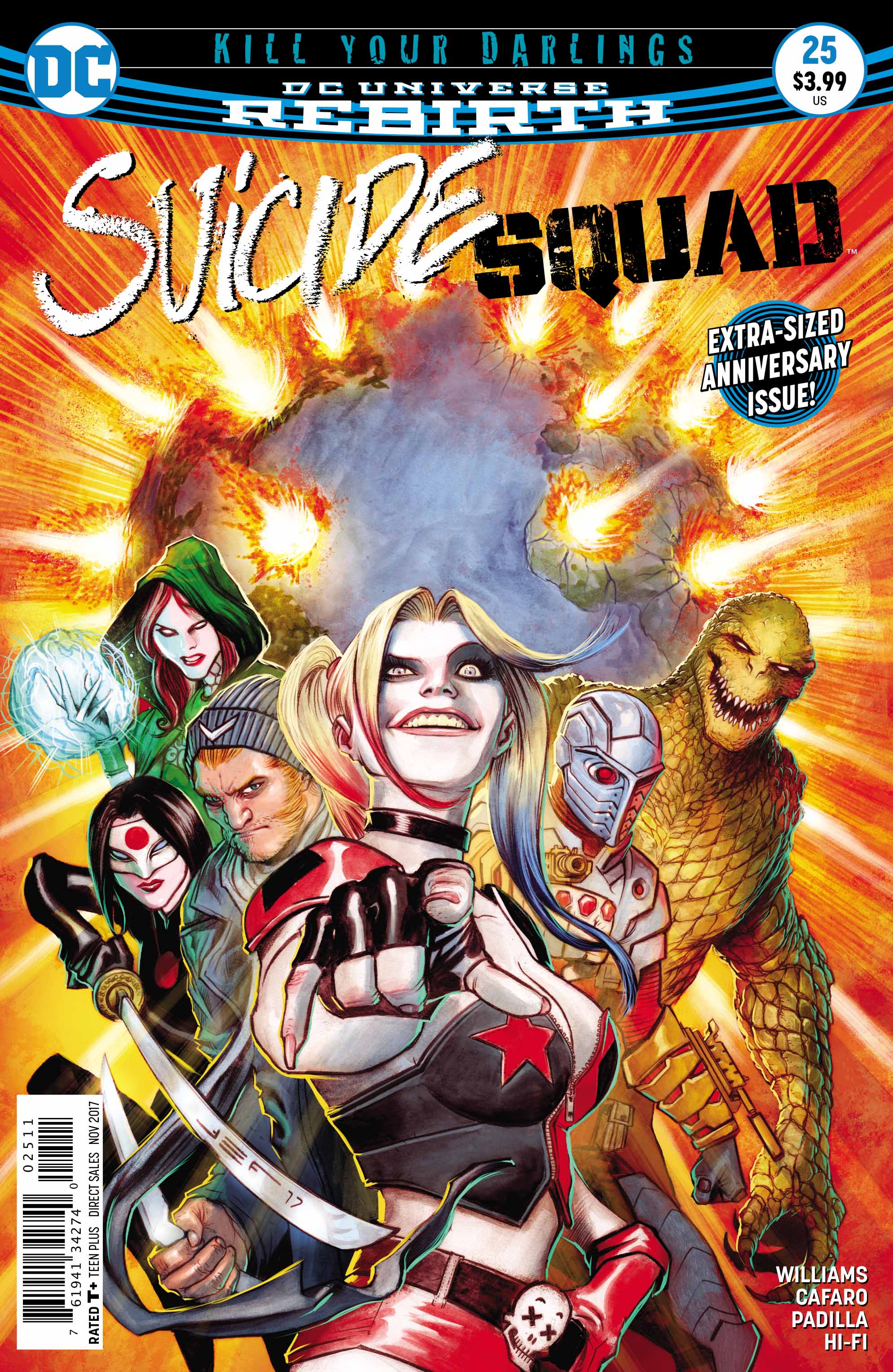 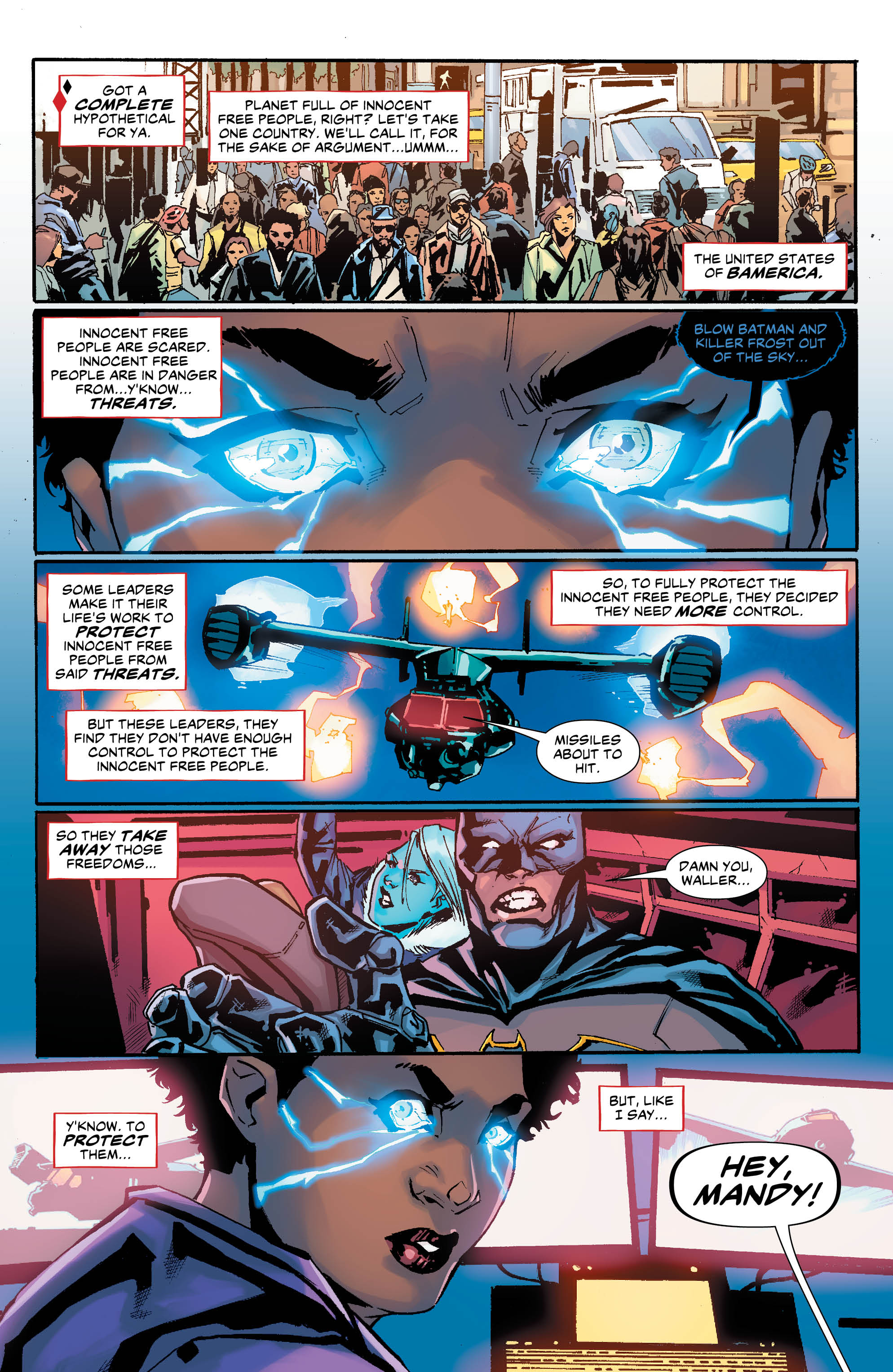 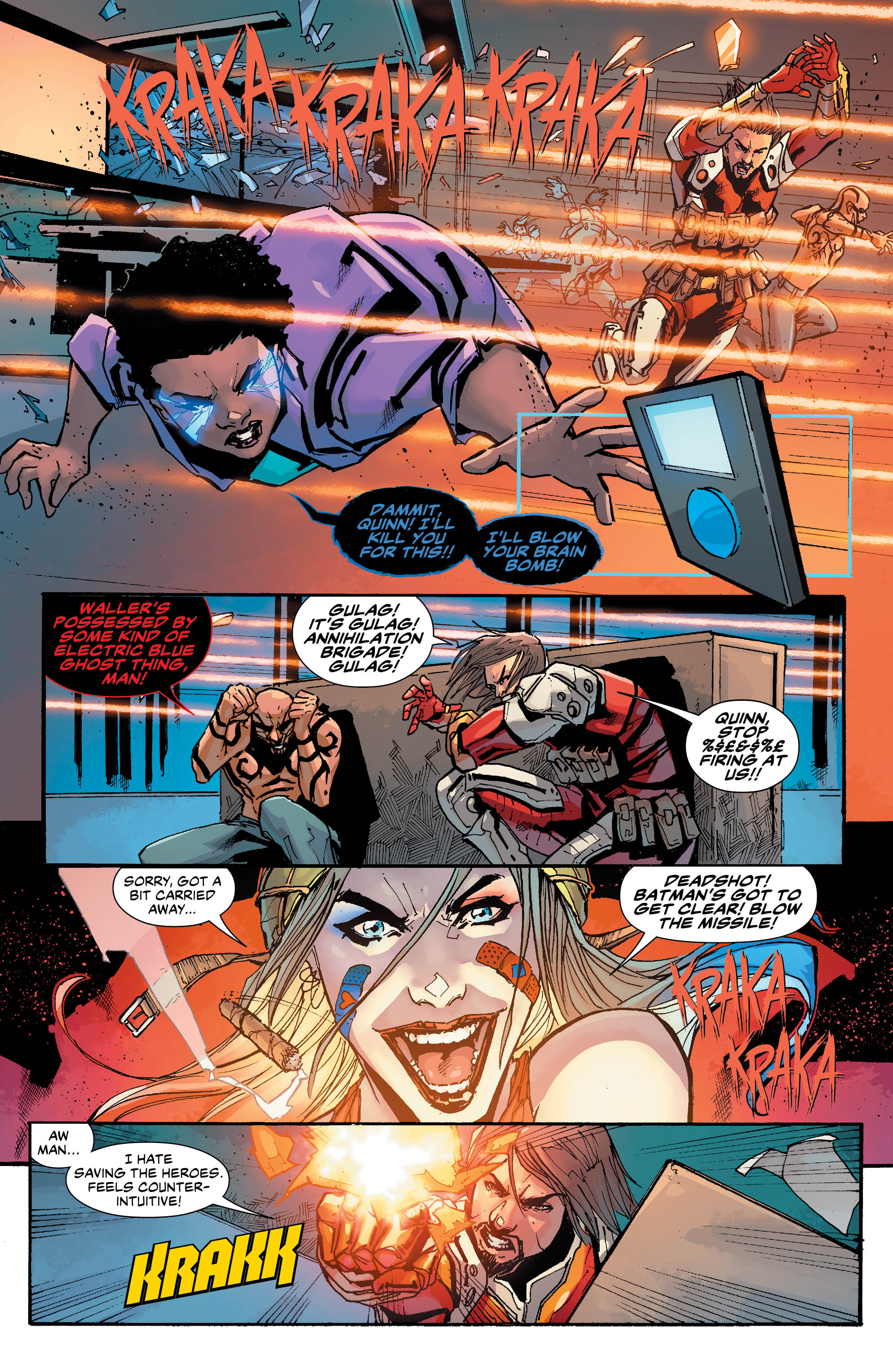 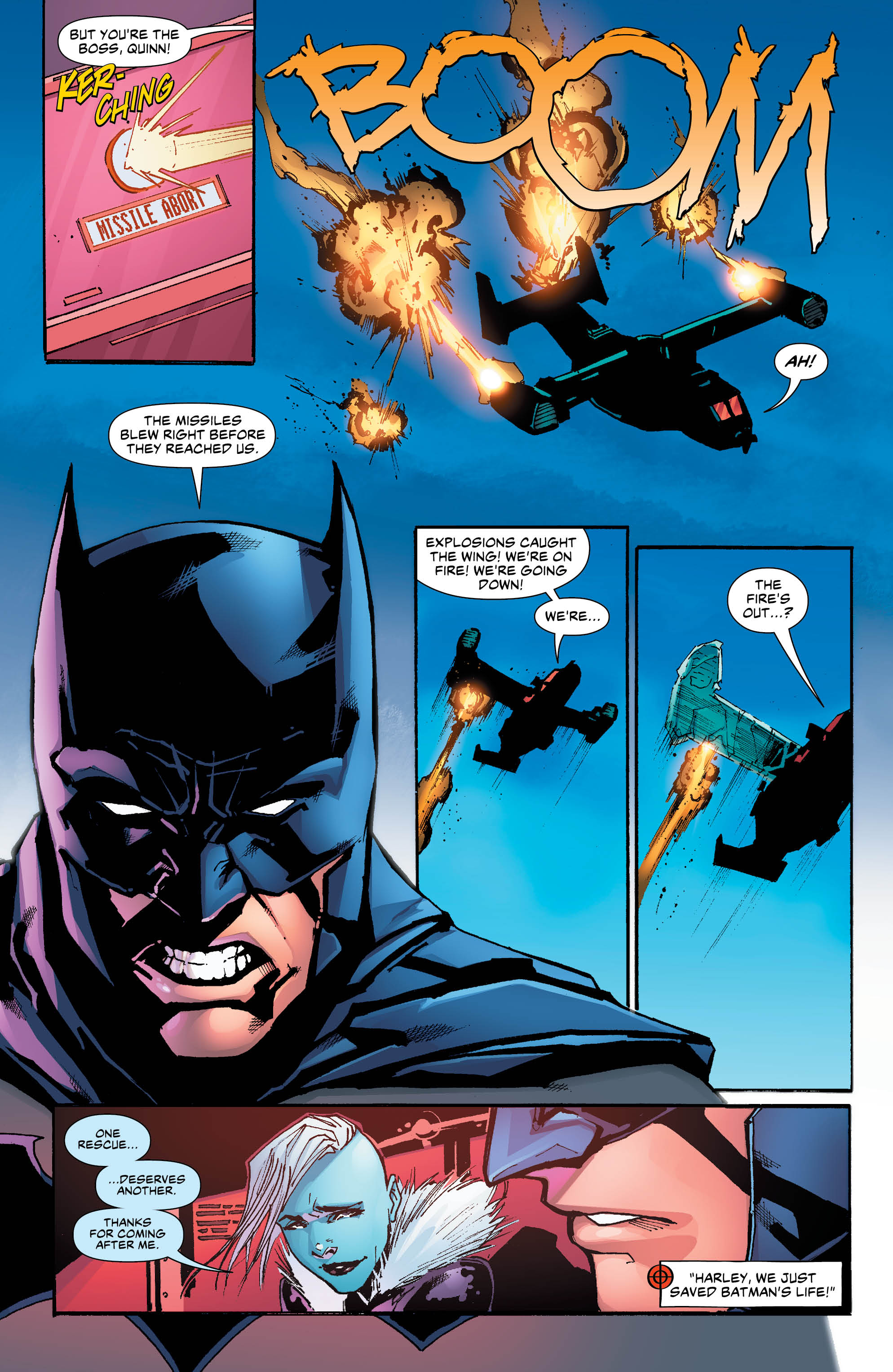 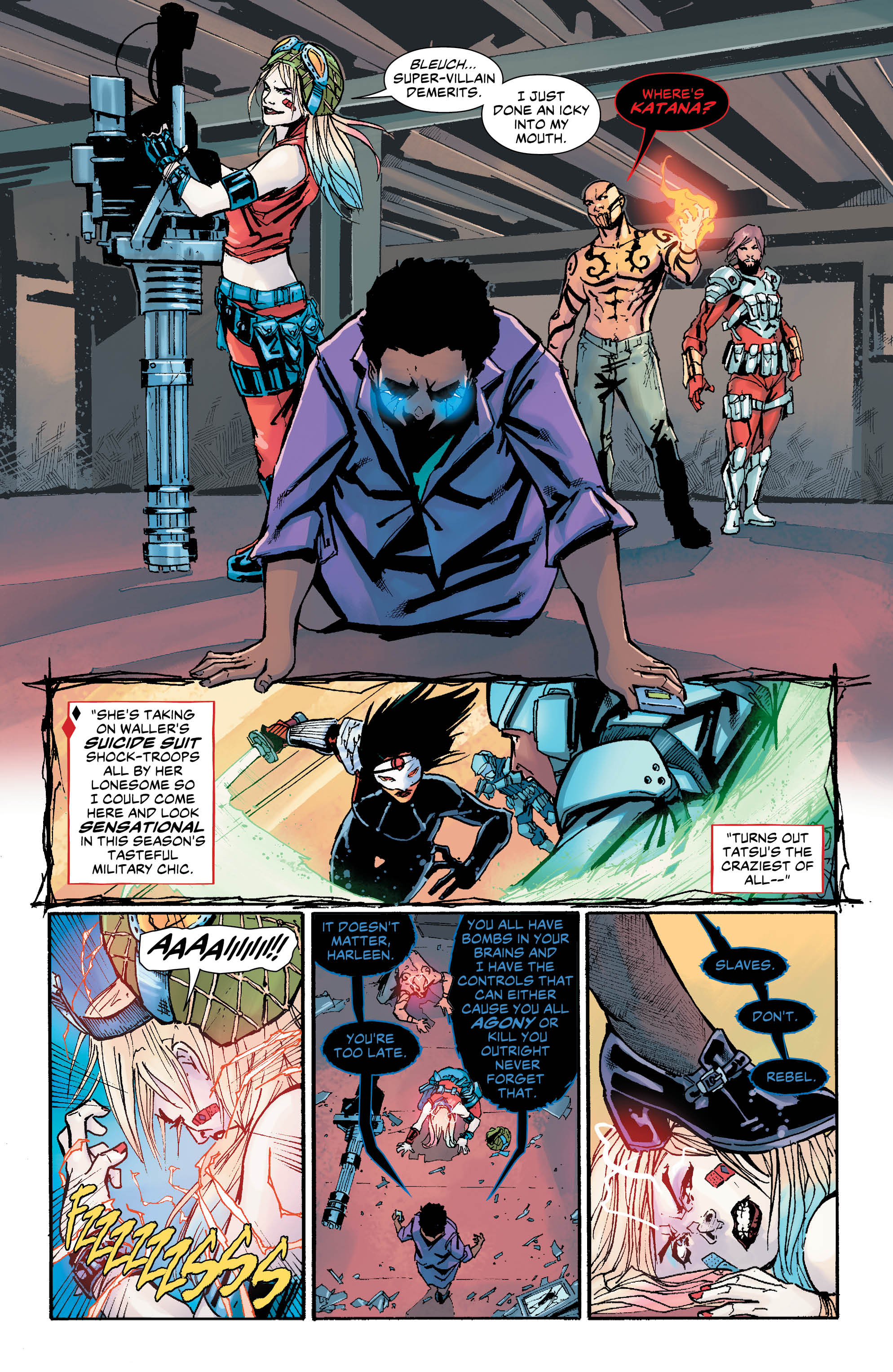 Kill All Your Darlings

The art this issue was kinetic and vibrant. Giuseppe Cafaro did a great job pencilling and inking his work, ably abetted by some great color art from Hi-Fi Studios. Glowing eyes, gunfire, Harley with a huge gun… this issue had action aplenty! The art in the epilogue, by regular contributor Agustin Padilla, closed off the story and the first year of Suicide Squad: Rebirth nicely. “Kill Your Darlings” has been one heck of a ride! Harley shuts down the invasion of the international suicide squads, led by Karla’s Annihilation Brigade in a shocking manner.

Suicide Squad has been a great read issue after issue, for a whole year now. I loved John Ostrander’s run from the 90s, but found the New 52 version of the series OK, at best. The DC Rebirth Suicide Squad run has been arguably the strongest in the series’ history, in my opinion. This book is being handled superbly by a writer who knows and cares about these characters. I know that I haven’t always been complimentary about the art, but it’s never diminished my enjoyment of the series as a whole.

I’m really looking forward to the second year of all the DC Rebirth titles, Suicide Squad being near the very top of the list. The “Kill Your Darlings” story has closed the first year off beautifully with consistently excellent storytelling. Who can ask for more?