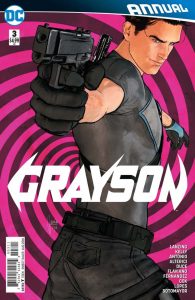 Although last month’s proper issue of Grayson served as the finale, the latest Annual officially brings things to a close. It doesn’t actually act as an epilogue, but rather, exists on an ambiguous place on the timeline, something the book actually acknowledges in an editor’s note. Said note also tells you to just have fun – and have fun you will. Dick Grayson fans by and large should enjoy this book that pays tribute to his superspy era, starting with Mikel Janin’s sweet cover that happens to be a nice callback to Grayson #1.

To say this book rounded up one eclectic bunch is an understatement. Have you ever played a wrestling video game and the tag teams don’t make sense? You know, you’re playing as Rob Van Dam in career mode and they pair you with Mark Henry to go up against The Great Khali and Scotty 2 Hotty at the Pay-Per-View. Well, that’s what things seemed like at first.

I was perplexed when I first saw writers Jackson Lanzing and Collin Kelly gather the likes of Harley Quinn, John Constantine, Azrael, and Green Lantern Simon Baz in the same room. But not only did they make it work, every character is perfectly written and their interactions with each other are quite amusing.

Why are they all in the same room?

As it turns out, Detective Jim Corrigan (don’t expect him to Spectre out) knows each have encountered the mysterious Agent 37 and asks them for stories in an attempt to uncover his identity. Expect to see a variety of talented artists bring some off-the-wall team-ups to life that involve vampires, a desert tussle with the Order of St. Dumas, laser acrobatics with Harley, and a battle with Parademons that happened to be one of the best Simon Baz stories I’ve ever read.

This done-in-one story very much reminded me of “Almost Got ‘Im,” which many of you likely find to be one of the greatest episodes Batman: The Animated Series ever produced. Not only that, it has an interesting twist at the end and does a fine job of ending this chapter in Dick Grayson’s long history.