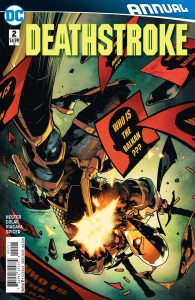 Regardless of whether or not you’re enjoying the current Deathstroke series, I believe any fan of the character can dive into this self-contained story and enjoy it. It’s not done by the same creative team that’s presently working on the monthly, but that didn’t stop them from kicking some ass.

Phil Hester, who really needs to write Deathstroke stories more often, ably brings the character’s ruthlessness to the forefront, while making him accessible enough to root for as a protagonist. Slade Wilson’s interaction with a young boy, Adi, adds a different layer to the story, forcing us to question how we would act when a gun is placed in our hand.

No story featuring this deadly mercenary would be complete without some ultraviolence and artists Mirko Colak and Roberto Viacava do a remarkable job of bringing those exploits to life. The fight scenes really move and it’s almost as if you’re watching a bloody ballet.

As Slade hunts the mysterious Balkan, we get a real sense of his worldliness in a tale chock full of international intrigue with just a pinch of noir. And that’s to say nothing of his battle with the deadly Stonecutters, although I was taken a bit out of the story because I kept hearing the old “We Do” tune from The Simpsons.

I guess I dug this story because it just felt right for the character and didn’t feature any ridiculous villains (the less I see of Lawman, the better). And, to be honest, I didn’t see the ending coming. It was Deathstroke’s equivalent of Jigsaw pulling the door shut and saying “Game Over” at the end of the first Saw movie.

J.K. Simmons Clarifies the Issue of His Muscular Physique