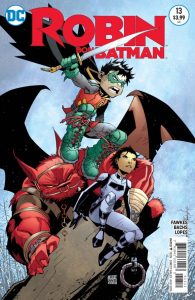 Let this series finale serve as a reminder of how far the character of Damian Wayne has come. There’s almost a Tomb Raider-like sense of adventure to this issue as Robin is joined by Nobody and Suren to deal with one last, deadly threat.

Just as Damian has his supporting cast rounded out, his short lived book comes to an end. The positive side of it all is that he’s more than ready to star in the new Teen Titans book that launches this fall. Hey, they did mention pizza a few times in here. 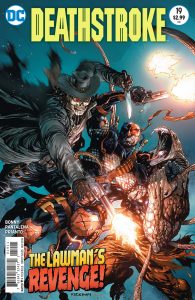 As Deathstroke swears allegiance to Ra’s al Ghul and the League of Assassins in exchange for saving his daughter’s life, we get treated to the usual amount of ultraviolence whilst Lawman and Snakebite continue to be thorns in his side. Jericho’s metaphysical journey to rescue Rose gets less of the spotlight, but is just as important.

This wasn’t the deepest of reads, yet still had its enjoyable aspects. The villains made a rather convenient exit, but the cliffhanger provided made for an interesting paradigm shifter. Regardless of what your opinion may be, know that Paolo Pantalena supplies some fine eye candy; I’d compare his artwork to that of Kenneth Rocafort’s and hope to see more of it. 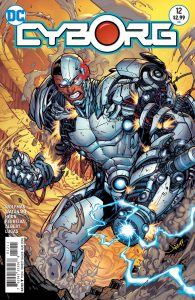 This month, Cyborg deals with a pair of metahumans who have infiltrated STAR Labs. As it turns out, they were infected by something there and are looking for a cure so they can live normal lives, something Vic can sympathize with. Things take a turn for the tragic and remind us of the value of patience.

While not as outside the box as last month’s issue, it still provides an exhilarating read rife with moral conundrums. 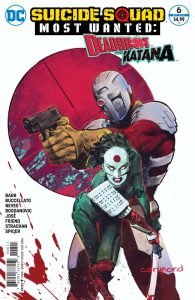 DC’s six month journey focusing on some Skwad members less known to the mainstream finally came to an end this week. As expected, Deadshot’s chapter was the stronger of the two as usual, but I didn’t know it would be this lopsided.

Katana does indeed triumph over Kobra and some sentient light beams (I simplified that, but yes, you read that correctly). The read itself is a bit fun, but the latter took me out of it as you probably sensed.

As I said, Deadshot’s half of the book is much, much better as we essentially get Deadshot vs. Deadshot in a deadly game that sees Floyd Lawton’s daughter’s life hanging in the balance. It reminded me of the head-to-head mode from the Splinter Cell games and managed to significantly raise the overall score I’m awarding this issue.