It’s difficult to review such a personal story without seeing yourself in it, sometimes. In this case, Paul Dini’s pseudo-return to the Dark Knight and semi-autobiography plucked at several different heartstrings that I wasn’t even aware were there. Although I haven’t experienced anything nearly as traumatic as what is discussed in this book, I saw a lot of myself in Dini.

Dini narrates to an unknown audience using storyboards, beginning with his childhood. Like a lot of creative kids, he was an outsider who lived in the world through the lens of his imagination and the characters who were able to support him as he battled a challenging life in school. He fast-forwards to his late 20s/early 30s, where he is a successful cartoon writer, knee-deep in Batman: The Animated Series, working on Mask of the Phantasm. At this point, the man is seemingly going through life putting value in his possessions, rather than finding anything meaningful. Alan Burnett, writer/producer of B:TAS, as well as his therapist, constantly remind him of it.

His luck with women is indicative of his quest to find value in sparkly objects as he looks toward gorgeous actresses as eye candy around his arm at high profile events. It is his desire to stir some emotion in an uninterested party that led him to make a poor choice one night. He was brutally beaten and mugged. 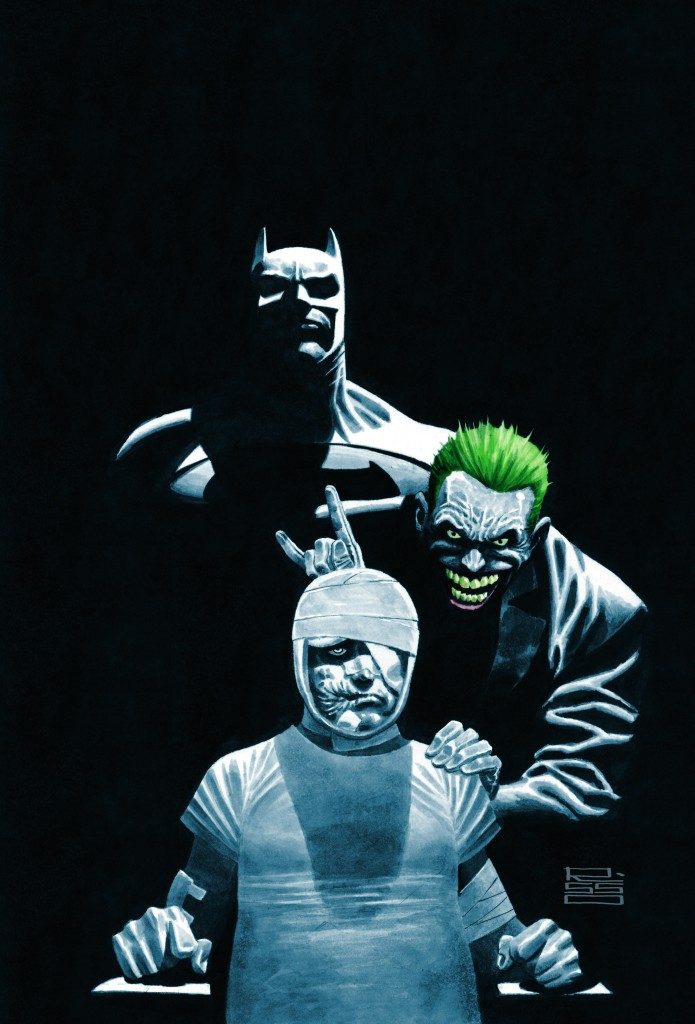 Broken both physically and emotionally, Dini must heal. Doctors were obviously able to help mend his physical wounds, but the mental toll it took seemed far worse. Dini was forced to face many demons on his road to recovery and in this story, those demons took the form of Batman’s rogues. The one guiding light was, of course, Batman.

The book was extremely therapeutic for myself and obviously, for its writer. Dini had to find a way to fight longstanding, deep-seated psychological issues after losing faith in one of his favorite characters. Beautifully written, Dini opens up about his mental illness and past self abuse in order to tell a story of his personal redemption, all while seamlessly weaving some of my favorite characters in it. It’s brave and powerful storytelling, coming from a deeply personal place. It may seem silly to others, but Dini uses the Batman characters to help tackle and overcome all of his issues. Skeptics might think it an attempt to shoehorn Batman into an unrelated tale, but it has everything to do with Batman, providing poignant storytelling structure especially given that he finds sanctuary in his imagination.

As I said before, it’s difficult to review a personal story without finding a little of yourself in it. I was deeply affected by it. I’m currently progressing through my own road to recovery and this story helped me more than I can possibly describe.

It is not without its issues, however. The buildup was captivating, but his resolution seemed quick, unexpected, and almost anticlimactic. In fact, I barely had an emotional response to it because I hadn’t immediately realized it came. However, it doesn’t take away from its deeply powerful message.

Risso’s art is not the most aesthetically pleasing when comparing him to greats like Greg Capullo or Jim Lee as a few panels would have benefitted from some extra attention, but the artwork is both powerful and evocative. The storytelling is just as stirring as Dini’s words, complementing it so much that I was reacting just as much to his art as I did to the script. At several moments, I found myself reading, then stopping and flipping back to re-examine the storytelling in his art.

Here’s the skinny: Dini’s story is gripping, powerful, and moving. His struggles with mental illness are on full display and his raw honesty is stirring. Just as the book was therapeutic for him, it was very much therapeutic for this writer and I hope that it can be the same for someone dealing with the same struggles. Like many of us who live in their imagination, he uses Batman characters to help him (it doesn’t get better than that, Batfans). Although suffering from a poor resolution, the message remains intact and resonates. All of it is told brilliantly through Risso’s evocative pencils.