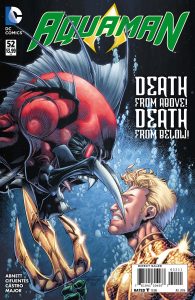 Those of us who have read any part of The New 52 run of Aquaman know that it redefined the King of the Seven Seas and solidified him as one of DC’s foremost bad asses, regardless of what the ignorant have to say about him. This week closes that chapter of Arthur’s legacy. Was it a fitting finale? Let’s find out.

Dan Abnett opens his New 52 swan song with Aquaman battling Scavenger while Mera and others are left to deal with Dead Water. She holds her own as she herself has proven to be quite the bad ass herself in recent months with her new Aquawoman persona.

While I miss Brett Booth’s pencils, who at least provides cover art (does anyone else think his Aquaman kind of looks like The Real Ghostbusters’ Egon Spengler ditched the glasses and rat tail?), Vicente Cifuentes does a fine job of choreographing the action scenes. You have probably seen his name pop up on various DC titles in recent memory, so do keep an eye on him. I’m not sure where he’s off to next, but the visuals left me satisfied as I await the arrival of Brad Walker during next month’s relaunch.

We do learn more about Jonah Payne, the man who has reluctantly become Dead Water, although I didn’t find his origin to be quite satisfying. I think someone could have come up with a better name for a mysterious liquid than “strange water.” The issue as a whole felt oddly paced and I’m wondering if Abnett had to work within the confines of having one issue to wrap things up before a boatload of new readers come aboard with the Rebirth era.

The Dead Water arc is tidily wrapped up, but this didn’t quite feel like a conclusion to a volume that has spanned five years. Perhaps that’s due in part to the fact that this is the same writer handling Aquaman Post-Rebirth and he knows there’s more to come. While this wasn’t as strong as the previous few issues, I remain optimistic about what the summer has to offer.