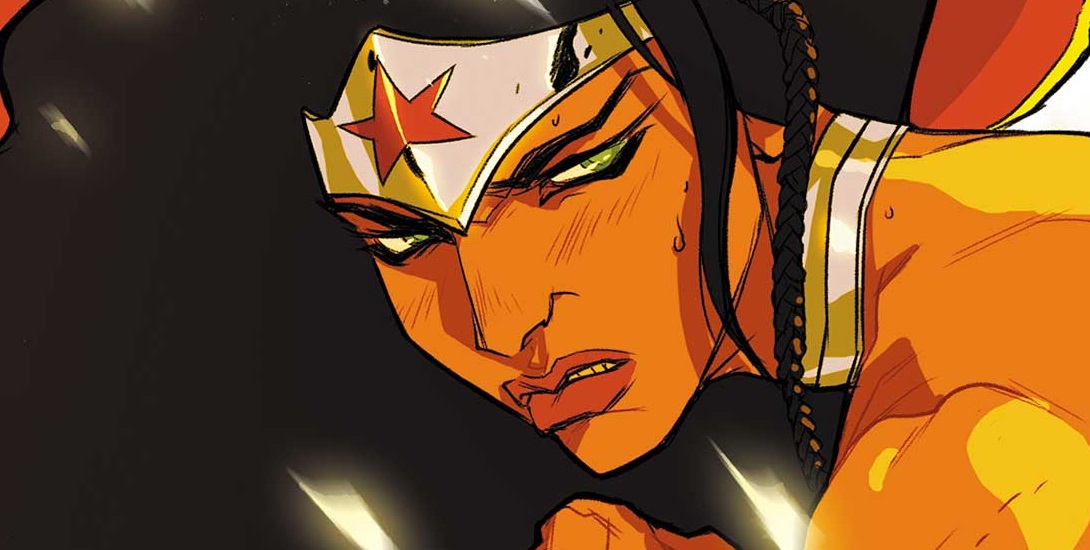 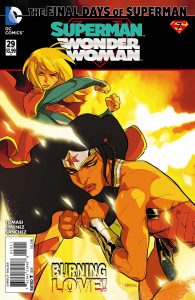 Superman/Wonder Woman #29 not only functions as Part 7 of “The Final Days of Superman,” but also as the penultimate chapter of the status quo altering crossover. Despite its place on the checklist, don’t expect many significant developments.

From Karl Kerschl’s cover to Jorge Jimenez’s interiors, this installment has a much different visual style than we’ve grown accustomed to seeing in the crossover. With many top artists contributing and putting forth their best effort, I didn’t mind the change in the slightest. The images are very vibrant and almost look like screencaps from an animated movie.

Jimenez works well in conjunction with Peter J. Tomasi’s script, which is quite heavy on action this week as Batman, Superman, and Wonder Woman take on the fake Superman powered by Super Flare energy that’s consistently been a thorn in the Trinity’s side recently. The fight scenes are well staged and dynamic as the layouts are quite creative.

A needed break in the action is provided when Pre-Flashpoint Superman takes his family to his Fortress of Solitude. It seems like there’s stuff even Lois and Jon don’t know, but I have a feeling much won’t be explored until after Rebirth kicks off.

We do learn a little more about the fake Superman when he briefly reverts back to a naked guy. With only one chapter remaining, I can’t help but feel that he’s a bit underdeveloped. Hopefully that swiftly changes.

While this issue provided for a nice dose of enjoyment, nothing terribly important happened. But if you’ve already come this far, I see no reason not to give it a read. Be sure to come back next week when the story concludes with Superman #52.