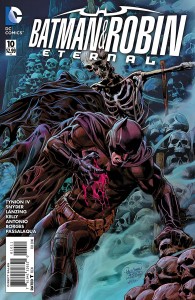 This is an issue that no Batfan should miss. Since the inception of  The New 52, there have been certain continuity questions raised and the Eternal creative team has given us some insight that has answered some questions, but has raised a few more. Such is the nature of serialized fiction.

The latest issue picks up where we left off last week, with Red Hood, Red Robin, and Bane doing battle with Azrael and the Order of St. Dumas. Said zealots are much more formidable than they appear, much to the dismay of our heroes.

Once they are able to break free, Jason and Tim explore the compound in such a way that I felt like I was playing a video game. Believe me, that’s not a criticism. The shooting of drones, grappling to higher floors, and fending off baddies while your buddy hacks a mainframe made me want to play an Arkham or Splinter Cell title.

Now, let’s talk about Azrael. He is indeed Jean-Paul Valley and Jason and Tim are not only meeting him for the first time, but they’ve never heard of him before. Not only that, he’s one of Mother’s children.

This is what I meant about answering questions, yet raising more. We’ve been lead to believe that some form of Knightfall happened in The New 52, but which parts stand? What does the future have in store for Mr. Valley? Hopefully this makes for an exciting next few months.

We also see Dick and Bruce have a bit of a falling out in the flashbacks. To my knowledge, we haven’t gotten all of the details as to why Dick became Nightwing in The New 52. Perhaps we will start to get some answers.

Speaking of Dick, the book ends with he and Harper following a lead in the present. It leads to this week’s cliffhanger, which will likely be explored next week. As in most cases, I don’t want to spoil it.

So, if the solid writing and artwork, the latter of which has consistently been a draw for this series, aren’t enough, the questions raised should keep you coming back for more. How could they not?