“The Trinity Of Trauma” 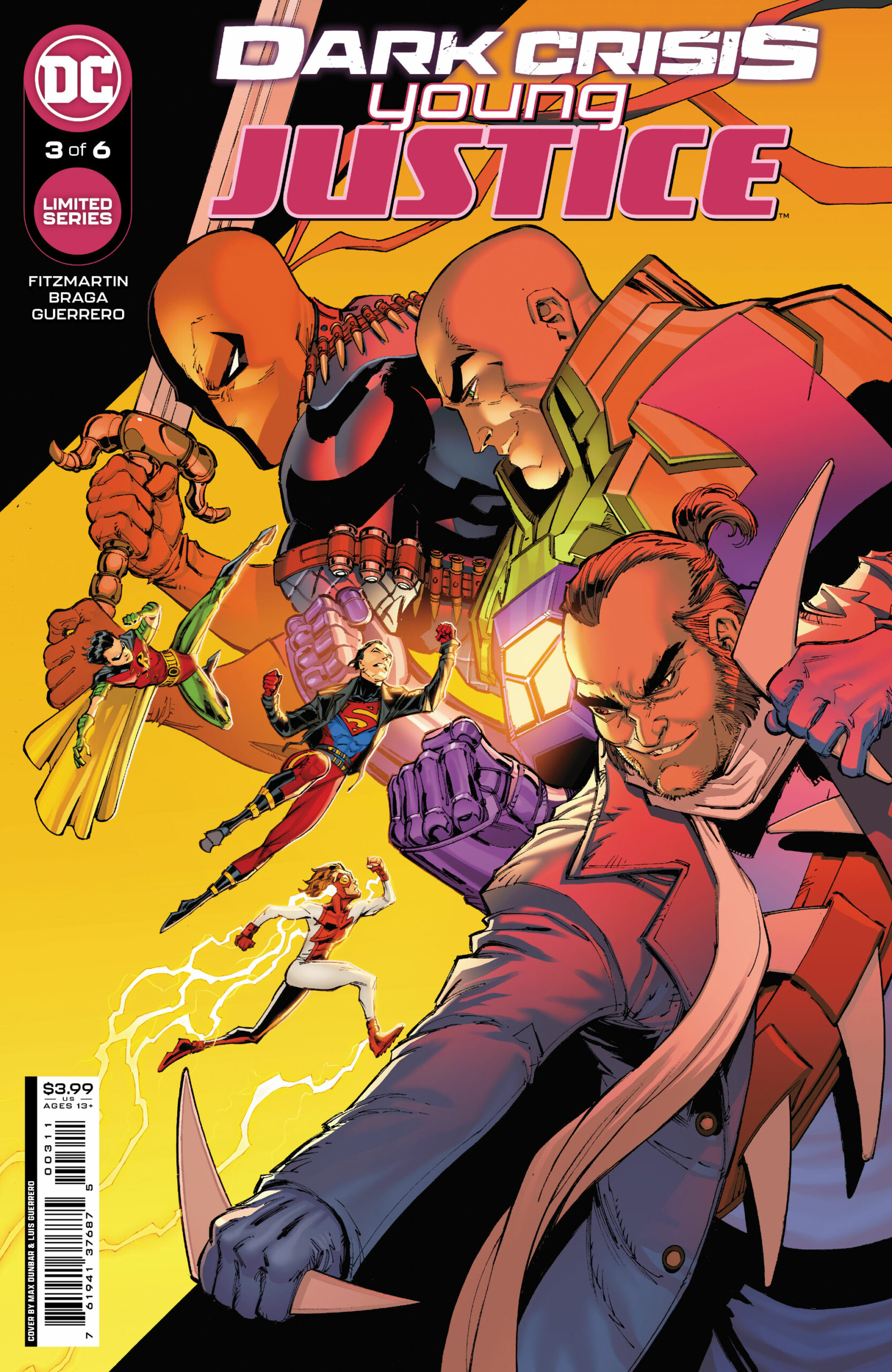 Dark Crisis: Young Justice #3: Sins of the old! In response to their lack of gratitude, the world holding Superboy, Impulse, and Tim Drake captive has brought back the three villains who have caused them the most pain to keep them in their place: Deathstroke, Captain Boomerang, and Lex Luthor. Old wounds will open. Wonder Girl and her search team will have to hurry up before there’s no Young Justice left to save!

This issue picks up the story with Robin, Superboy, and Impulse coming face-to-face with Deathstroke, Lex Luthor, and Captain Boomerang. Bart is the one to spot the connection between this particular trio of villains.

He tells his teammates:

These guys… it’s like they were chosen to hurt us specifically. Deathstroke blew my kneecap off! Captain Boomerang killed Robin’s dad! And Lex… you’ve never gotten over that he’s part of you, Conner… 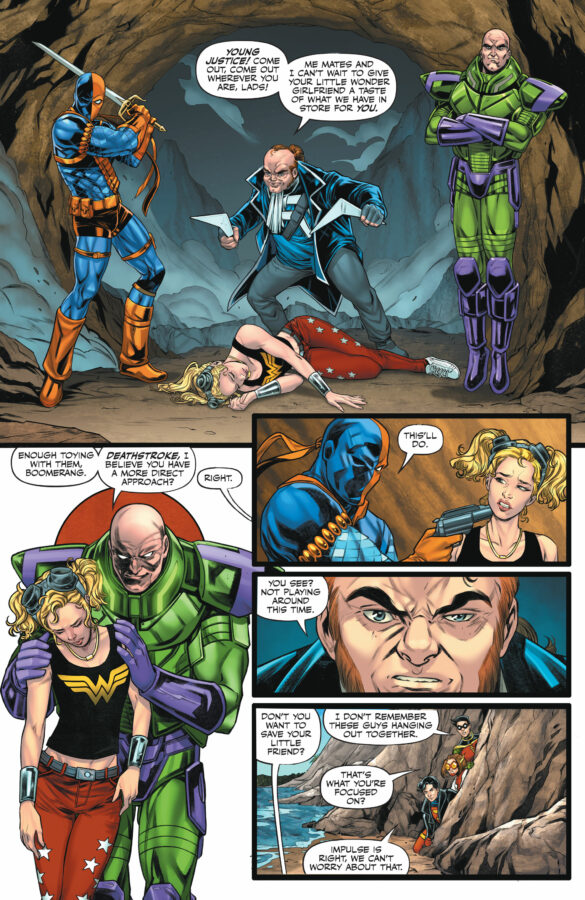 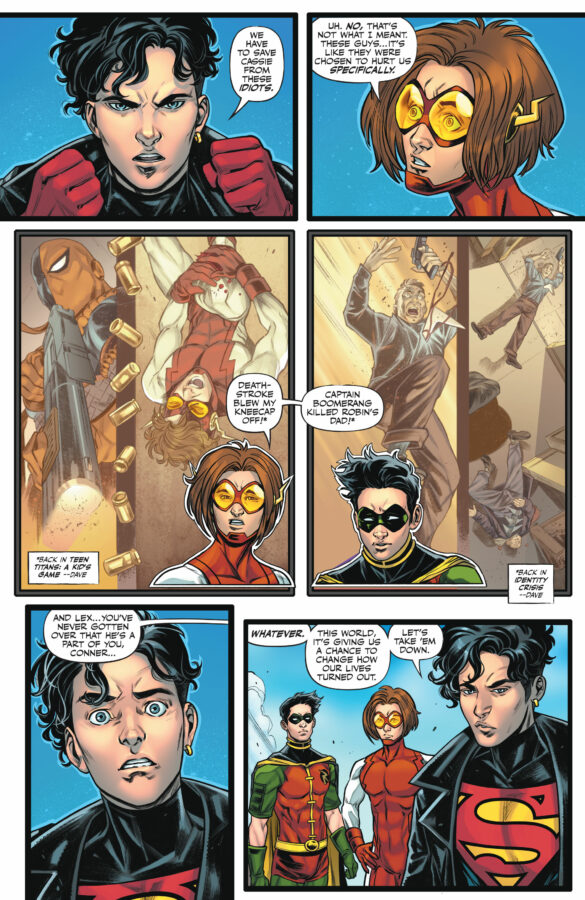 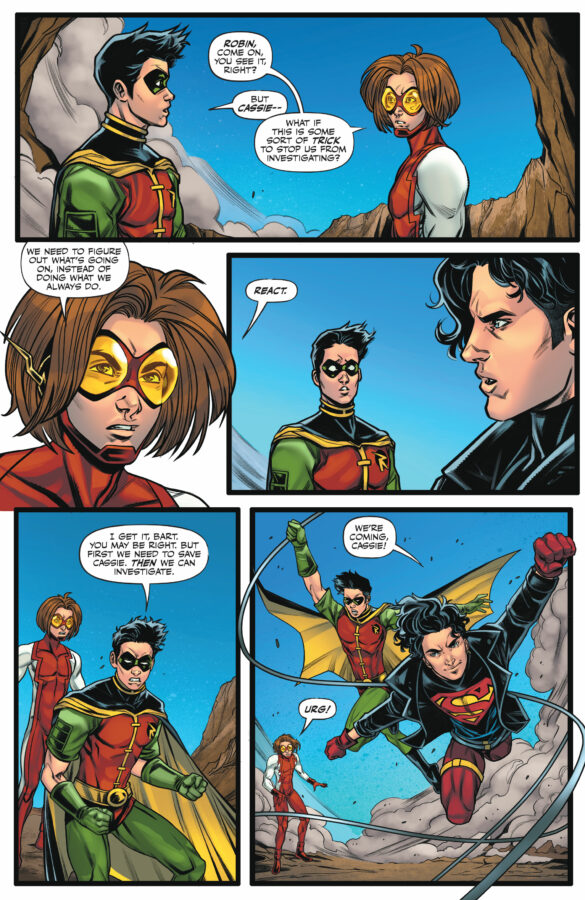 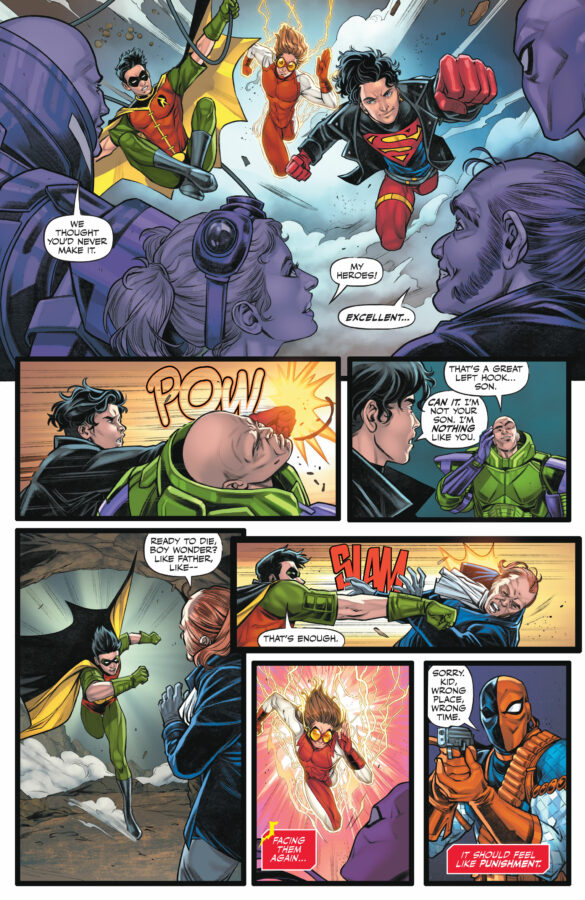 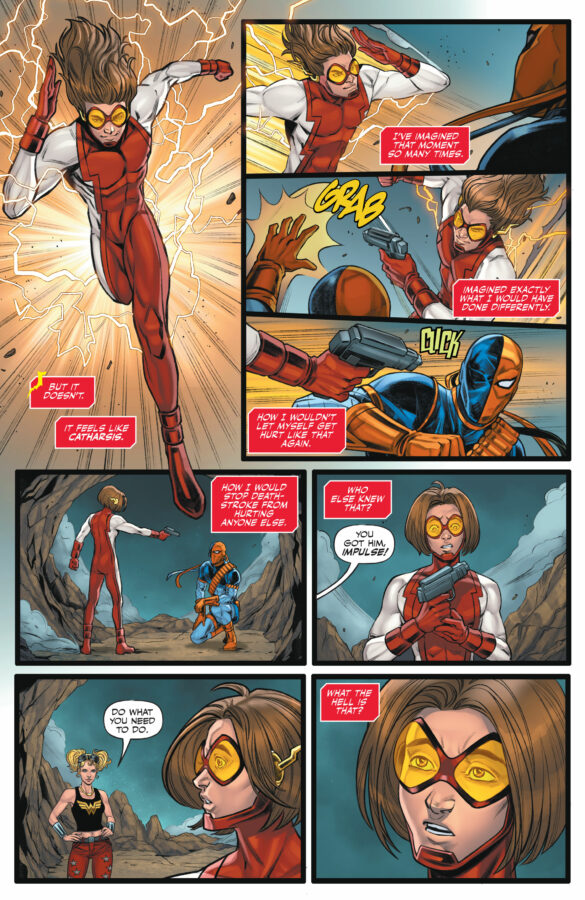 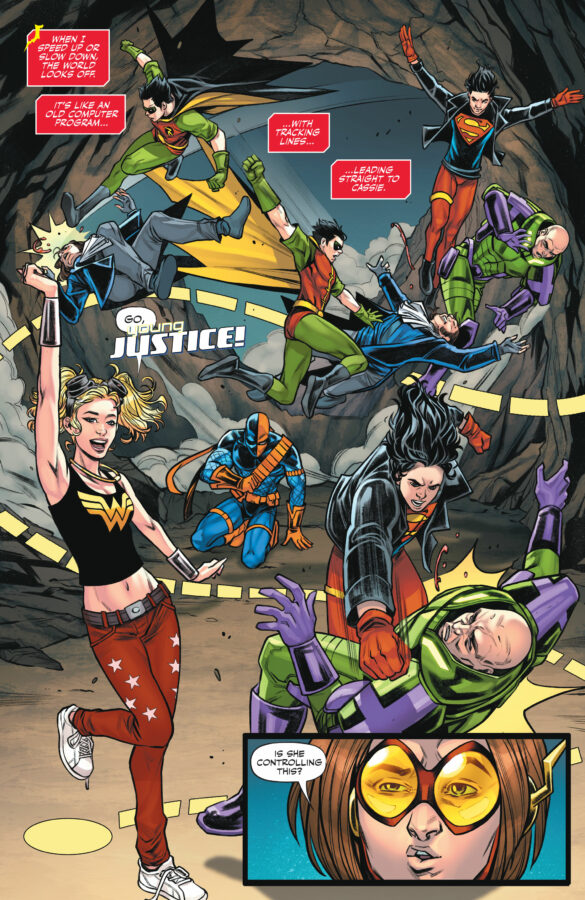 I find it interesting that it’s Bart that realizes this, rather than Robin, who is the detective of the trio. Bart’s teammates tend to see him as somewhat flakey and easily distractible so they tend to forget that like his mentor, Wally West, Bart’s strongly intuitive. So, it shouldn’t be surprising that he might clue in to something being off before Tim, despite Tim being generally more observant. In fact, it seems that Bart is more resistant to this world’s temptations than the others.

However, it appears that he is wrong that the choice of villains is meant to hurt them. Rather, I think that the architect of this world is offering them catharsis through a victory over them, but Bart sees through the illusion, as does Tim with a little prodding. Conner has nearly completely given in to it.

After reading the previous issue, I concluded that the Cassie of this world wasn’t the real Cassie, but either this world’s architect or their agent. “Cassie” confirms this when Conner finally realizes that Bart was right.

Don’t make me do this. He’s going to be so mad.

It’s unclear who “he” is, though. Is it Pariah? Considering that this is a Dark Crisis tie-in, and Pariah has put the Justice League into similar false worlds in that storyline. However, I have a suspicion that something else is going on here.

When all three reject the life that this world is offering them, Cassie then informs them:

He gave you the chance to accept this world on your own terms. Now he’s gong to make you accept it…by force.

The boys from Dark Crisis: Young Justice #3 are then faced with the Justice League, Teen Titans, and several other DC heroes, presumably ready for a fight. This looks to be an insurmountable challenge, assuming that these copies are actually as formidable as the originals. 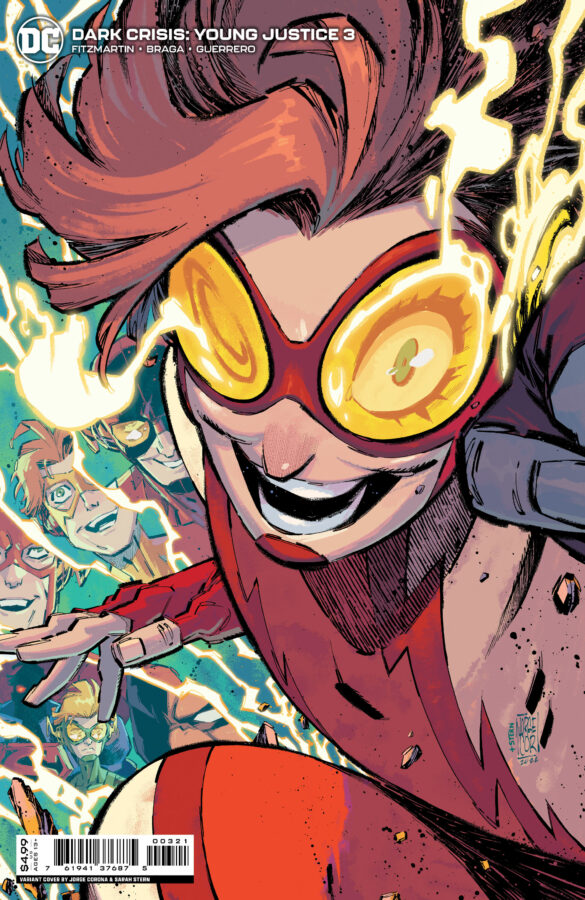 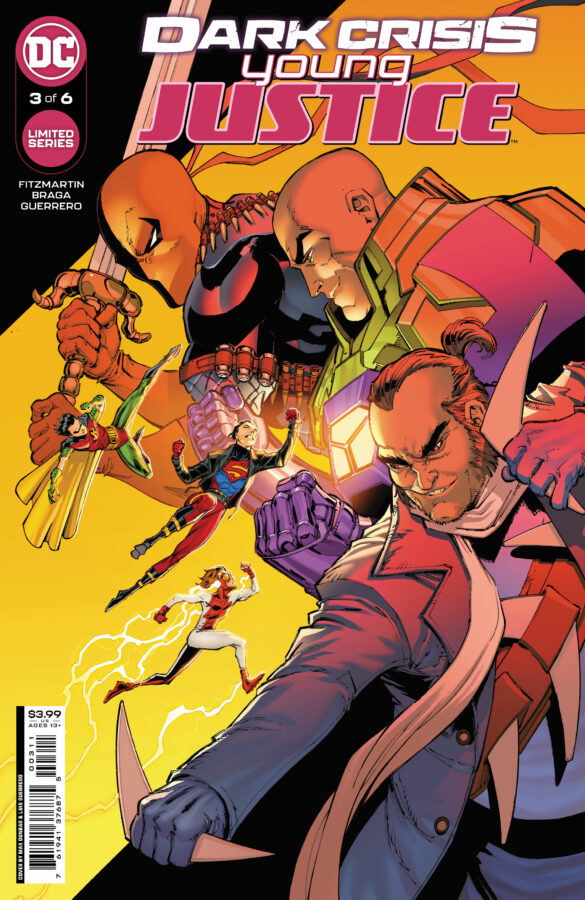 The only real issue I have had with this series so far is the characterization of Arrowette and Wonder Girl. They seem to have somehow picked up a deep-seated resentment for the male members of the team that never existed before this series. Since neither Cissie nor the real Cassie appear in this chapter, however, it can’t really be levelled as a negative for this issue.

The fact that they don’t put in an appearance is something of a negative. At the very least we should have gotten a quick check-in with the girls, who are as important to the story as the boys. This is a pretty minor quibble, as I’m sure they’ll figure prominently in the series’ forthcoming issues.

As a fan of Peter David’s original Young Justice series, I am loving this return of the team. Fitzmartin and Braga are doing a fine job of tapping the nostalgia for that series, while still creating a new story of their own. I am hoping that this series is leading to a new Young Justice title. Hopefully DC has plans for Young Justice once the dust settles from Dark Crisis.