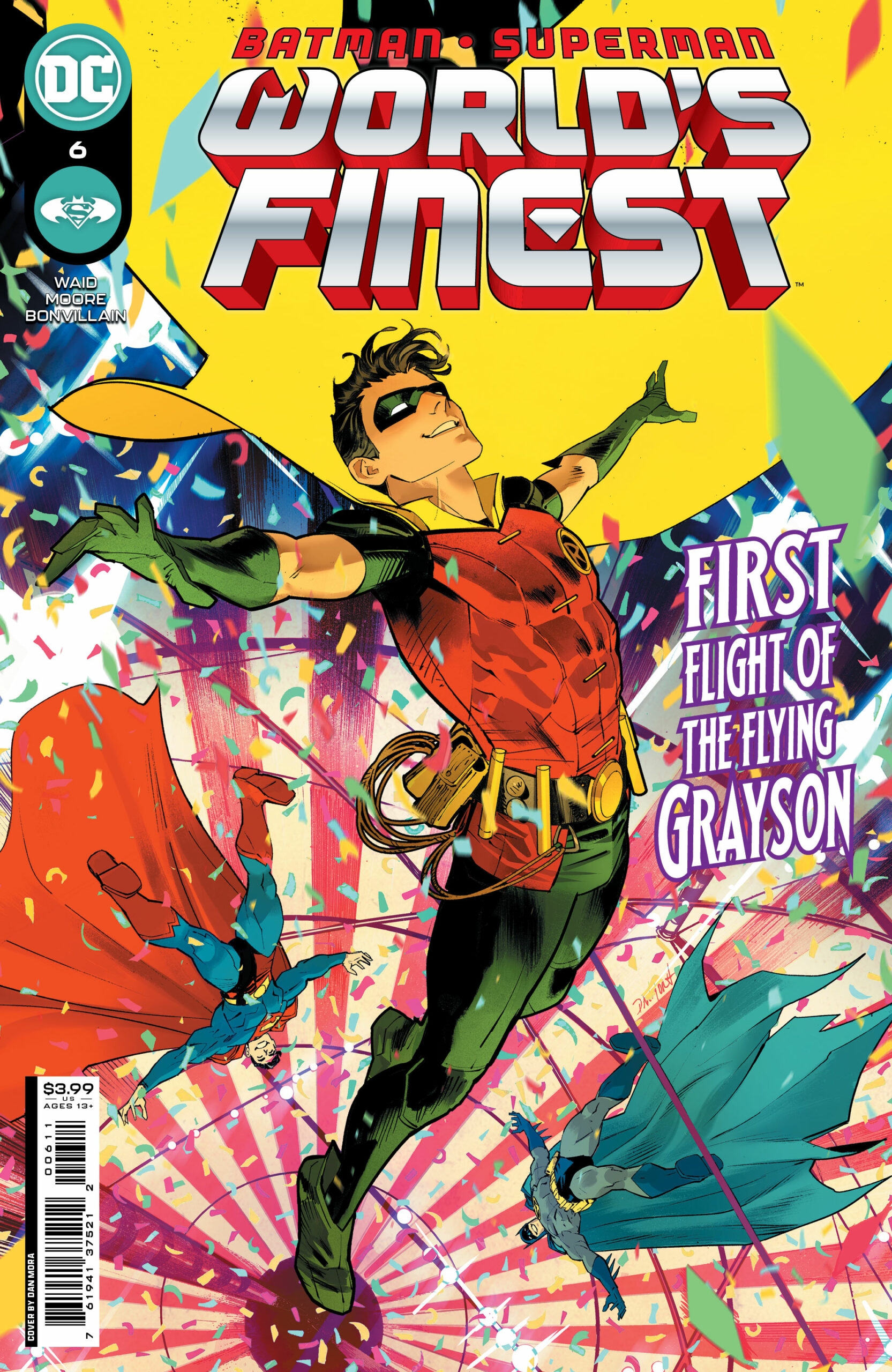 Robin is stuck in the past and on the hunt for a circus murderer, in this month’s Batman/Superman: World’s Finest #6.

While traveling in the time stream with Supergirl, Dick Grayson accidentally lands in the wrong time (see issue #4). Instead of returning to his own moment in history, Robin arrives in 1892. When no one immediately comes to his rescue, he goes in search of food in shelter. Coincidentally, he stumbles across a traveling circus. Considering his history and attire, Dick decides to join up as a trapeze artist. After spending some time traveling with the circus, he finds himself investigating the murder of one of the circus crew. 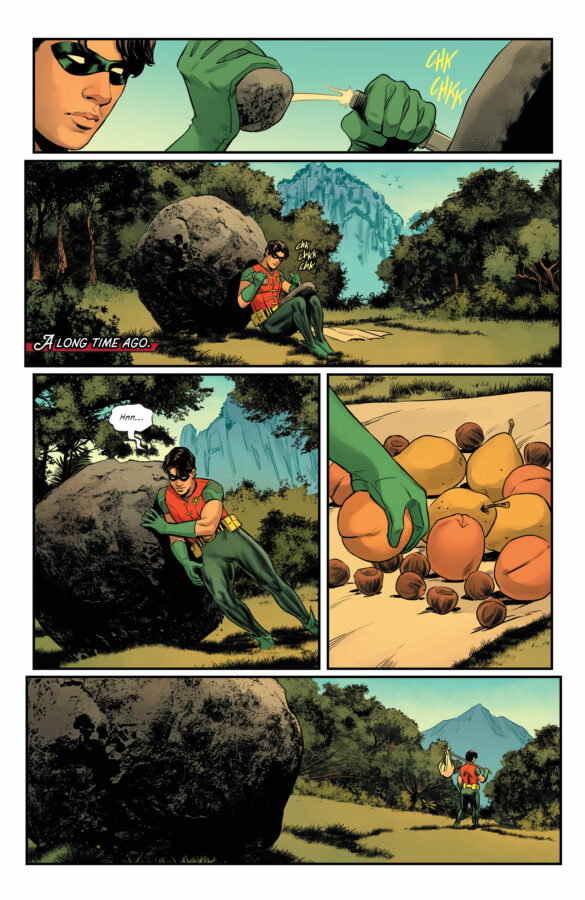 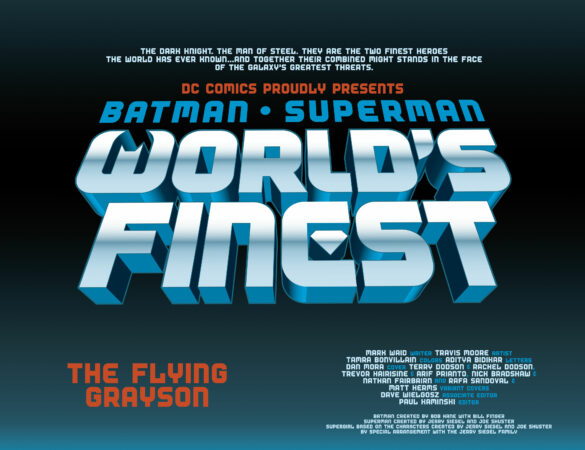 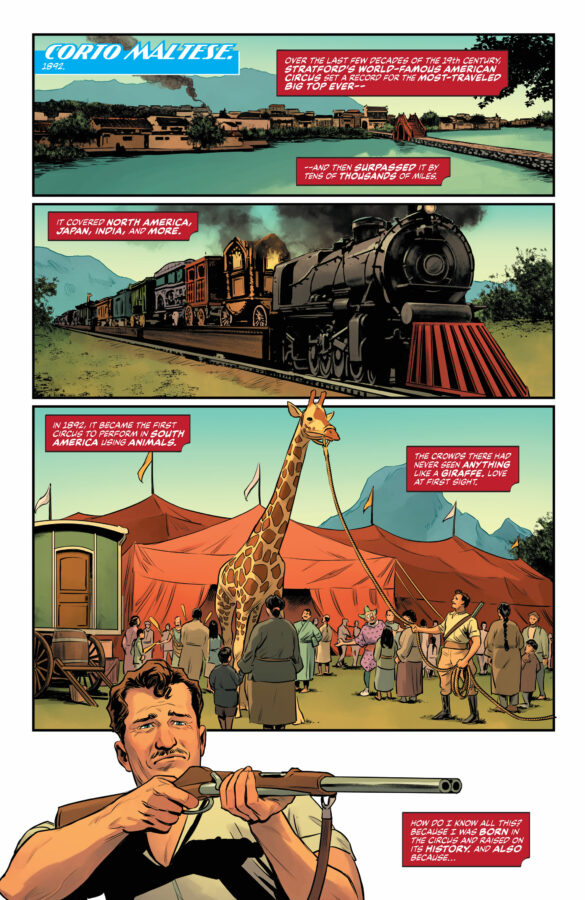 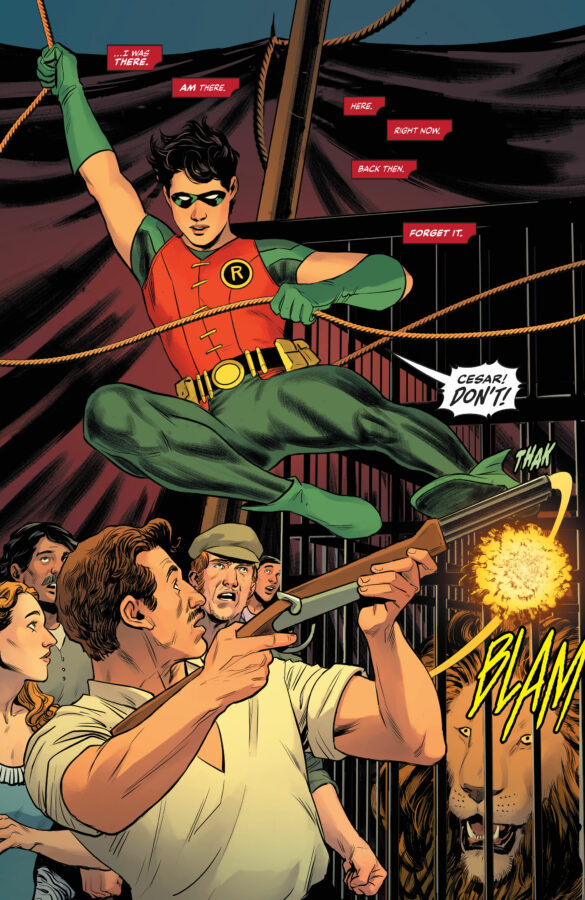 This issue is the quintessential “One-n-Done”: a self-contained issue that usually serves as a filler in between arcs. The story is small potatoes compared to the time-traveling demon lord shenanigans from the previous five chapters. Nevertheless, it’s charming, particularly, it’s nice to see Grayson take center stage. He’s happy living with a circus crew, which is fairly unusual for heroes who have traumatic origin stories. The tone of the issue is light, but it doesn’t skimp on the action. This has been one of the more refreshing aspects of World’s Finest: Waid’s tone is far more silly and whimsical than just about anything else on DC’s roster these days.

Travis Moore drew this particular issue of World’s Finest, which is a shake-up, as Dan Mora drew the first five issues of the book.  Travis Moore’s work is rock solid; his character designs are consistent with Mora’s, and his layouts are also par for the course. He does a great job capturing character emotions, and his action sequences are dynamic. However, for me, Moore’s work lacks a certain je ne sais quoi that’s indicative of Mora’s style. Then again – most artists lack Mora’s je ne sais quoi, so I’m not exactly sure how fair my criticism is. Nevertheless, Mora’s absence is felt, even though his replacement did a great job. 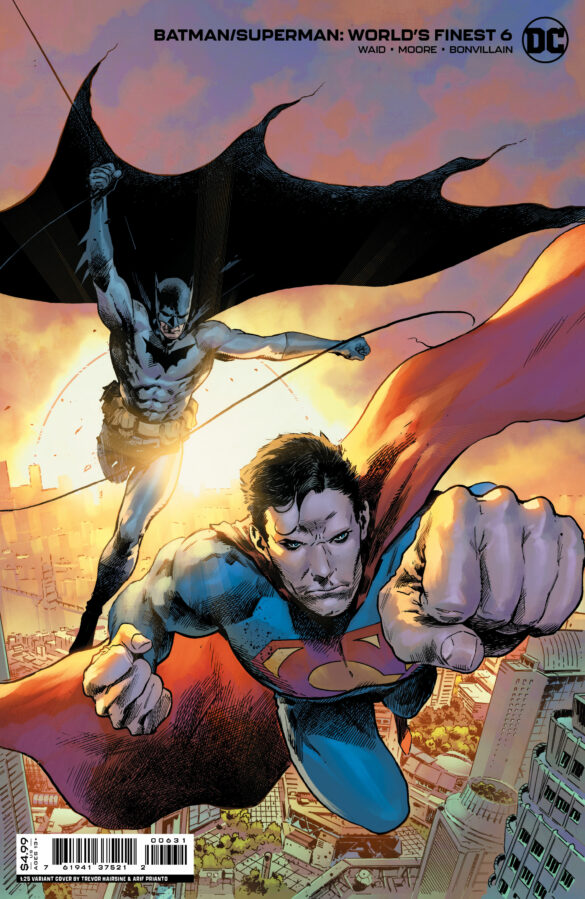 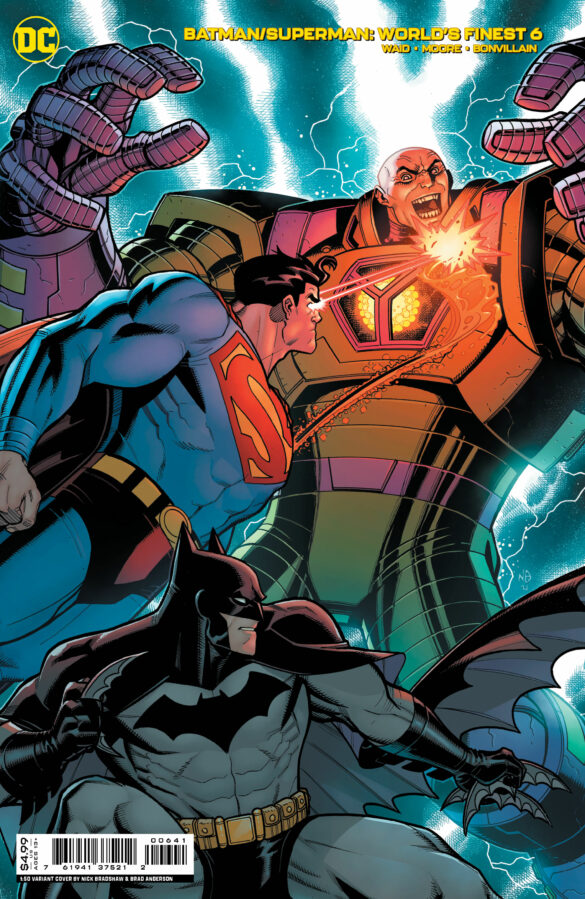 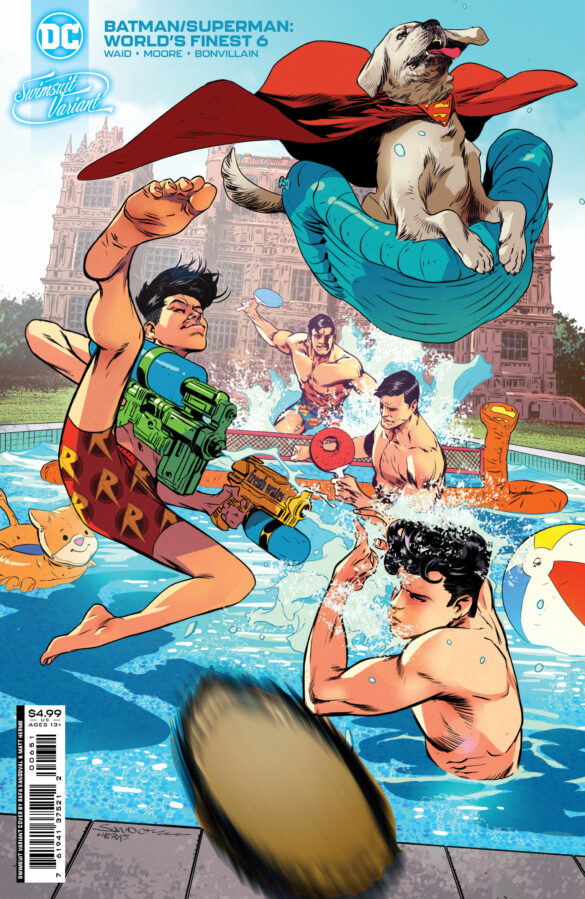 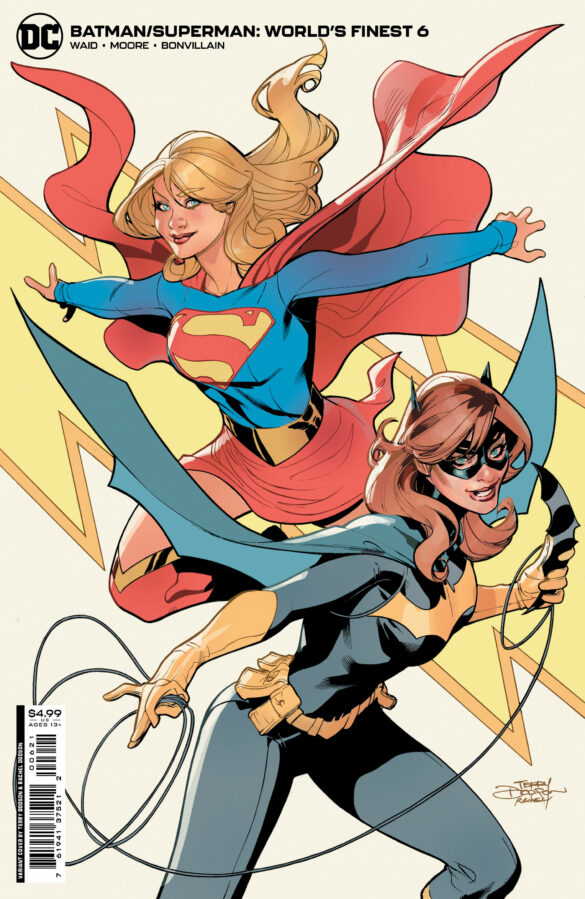 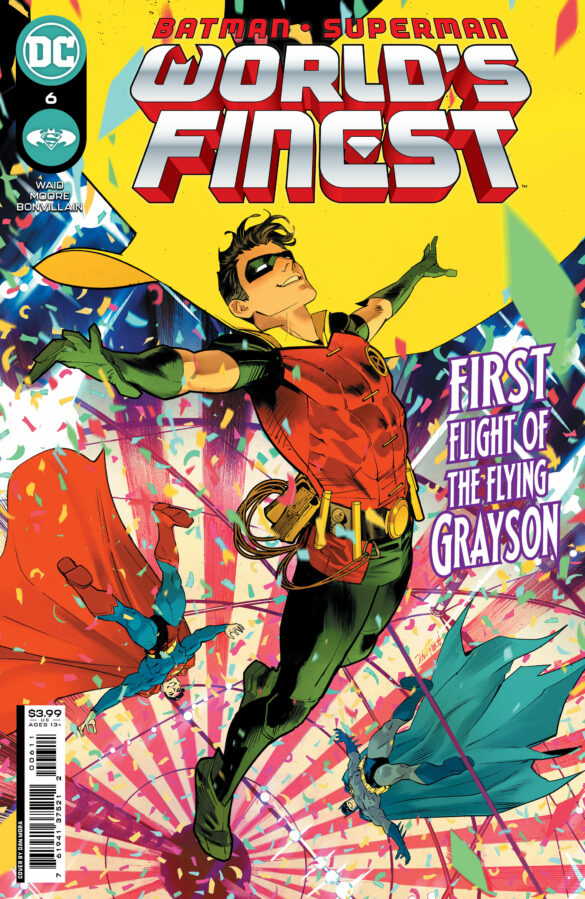 Batman/Superman: World’s Finest #6 is a nice little side adventure; however, it doesn’t really rise above the status of filler. It’s a downbeat issue that seems irrelevant to Waid’s overarching story. Moore’s art is very good but doesn’t achieve the same level of greatness that Mora’s does, in my opinion. This combination of factors makes the issue slightly subpar. Mind you – issues 1-5 were absolutely fantastic, so the bar for par was set pretty high.