“A Tale of Two Cassies” 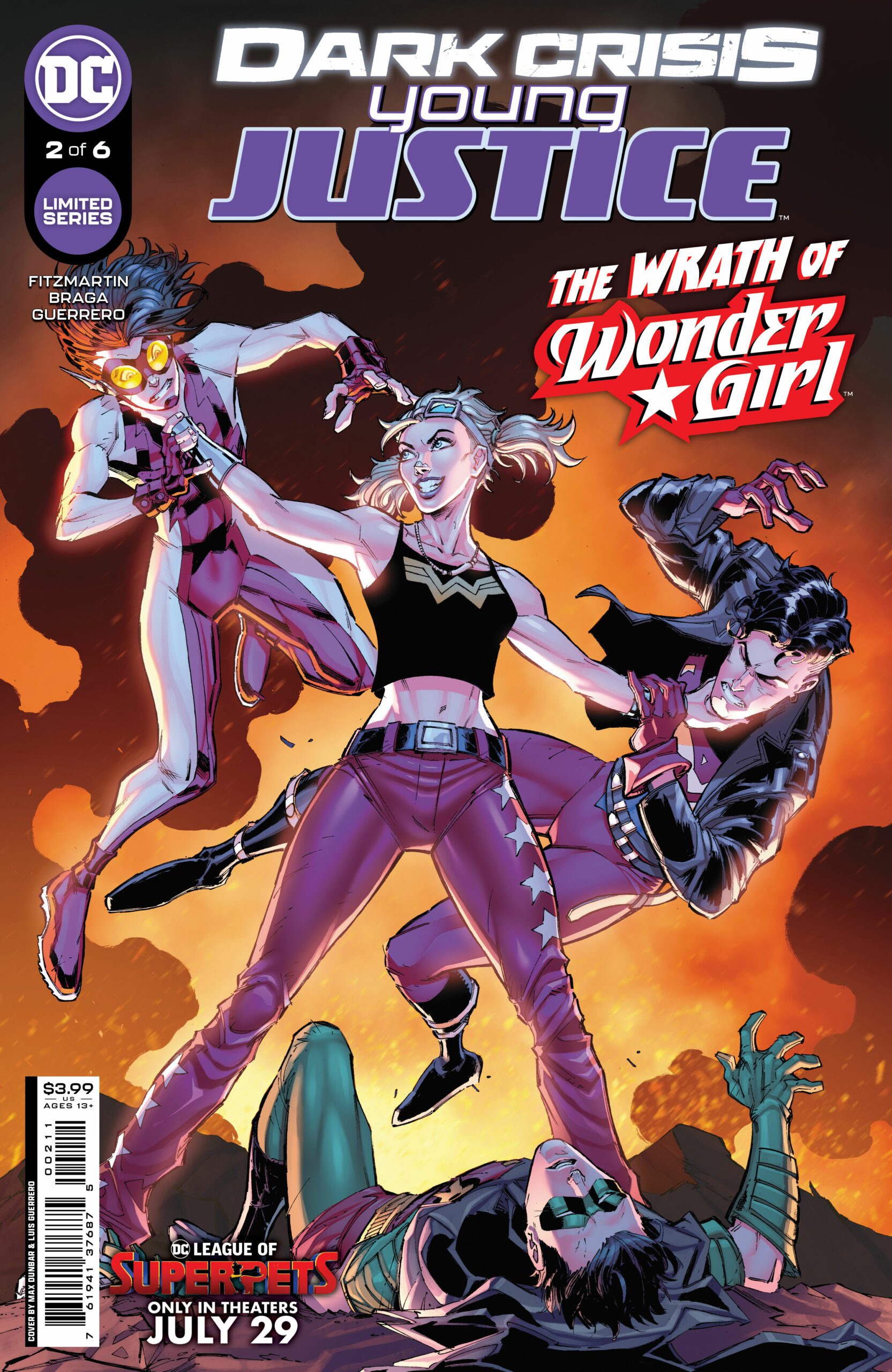 Superboy, Robin, and Impulse have been transported into what seems to be their past in this week’s Dark Crisis: Young Justice #2.

Last month, Superboy, Robin, and Impulse vanished suddenly after meeting up with Wonder Girl to discuss the death of the Justice League. It seems that the boys were sent back to the 90s, as the team found themselves in the old base at Happy Harbor. They even came face to face with their first villain – The Mighty Endowed. 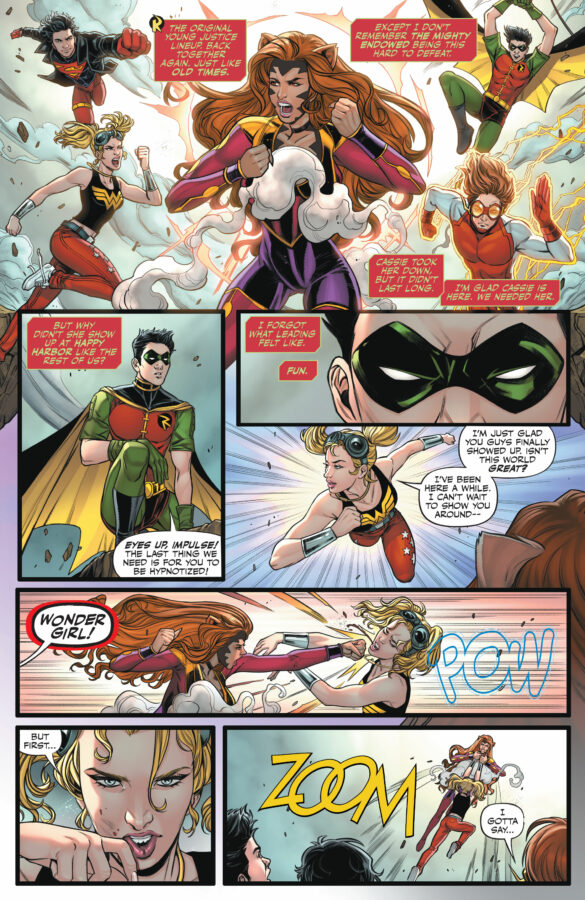 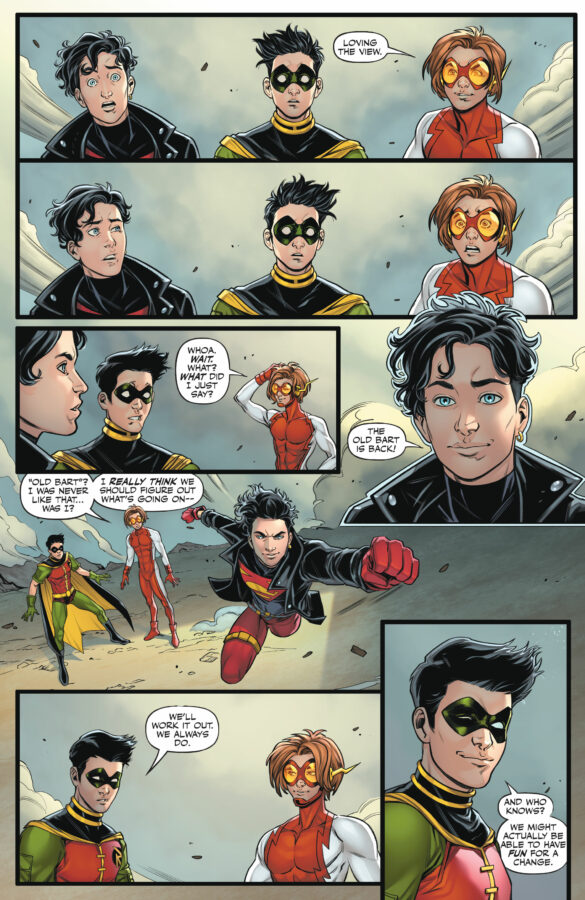 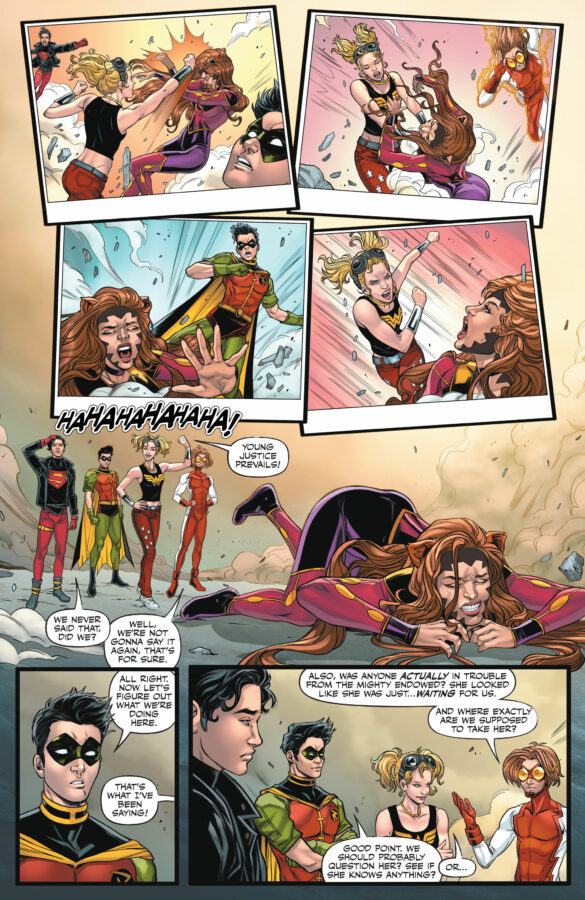 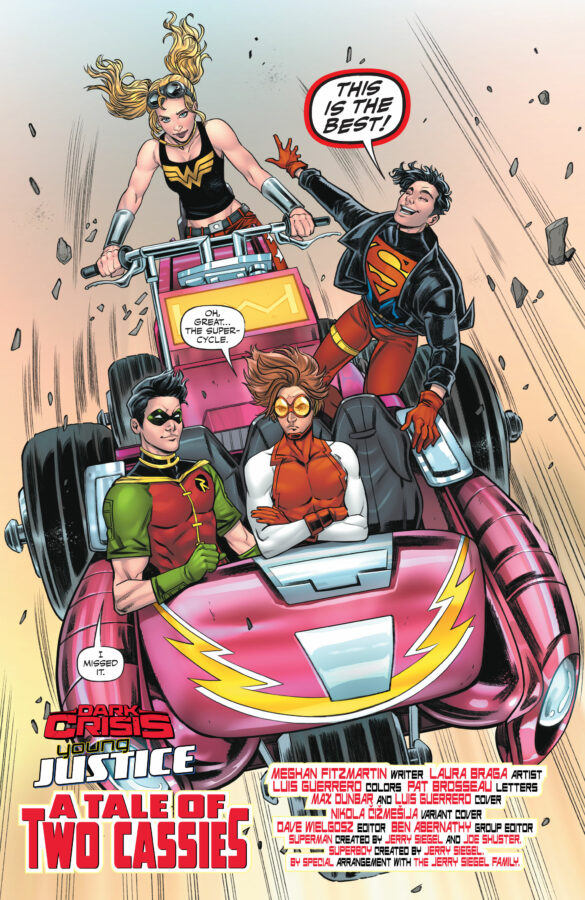 This issue opens with a younger version of Cassie appearing out of nowhere, as the boys struggled to cope with The Mighty Endowed and her mesmerizingly large… I’m not gonna say it (yeah -it’s a thing). After Cassie stomps the villainess, the four heroes head to the Watchtower: the Justice League’s moon base from the 90s. Upon arriving they are greeted by that era’s super team. However, things aren’t what they seem, as Tim, Bart, and Conner are all approached by their mentors who offer each of these legacy heroes their corresponding mantles.

Meanwhile, the Wonder Girl from now is desperately trying to locate her missing friends. Out of options, she turns to her former teammate, Arrowette, who has retired from superheroing.

As I mentioned in my previous review, one of the major themes of Dark Crisis: Young Justice #1 was nostalgia. What’s interesting about this month’s issue is that Meghan Fitzmartin returns to this theme again, but with a twist. Instead of simply reliving “the good ole days”, she reexamines the 90s through the lens of today’s morality. For example, when 90s Batman offers Robin the mantle, he comments that Tim’s bisexuality is simply a phase. When the three displaced heroes regroup, Bart notes how sexist, homophobic, and racist the 90s were. He continues by saying:

This is a place for immature boys.

It’s evident that Fitzmartin is commenting on both the original Young Justice run as well as the 90s in general.

Ultimately, this issue’s script is a challenge to Millenials, who are notoriously nostalgic. For the record, I am a heterosexual cis-gendered white Millenial male, so the original Young Justice was written for my demographic. It’s easy to rely simply on memory to look back fondly on childhood entertainment; however, upon closer inspection, it’s apparent that the social mores of the 90s weren’t the most progressive.

Women, racial minorities, and the LGBTQIA+ community weren’t always treated respectfully – especially in a medium like comics that largely catered to WASP male prepubescents. So the question then becomes, “What should we do with this period?” Young Justice was largely beloved and such attitudes were not only a part of comics history, but I’m assuming many Millenials had such attitudes at the time. Fitzmartin is wrestling in this story with what many fans of my generation are wrestling with – how to acknowledge, value, and evaluate our past appropriately.

90s comics were known for having a fairly distinct visual identity. It was extreme in all manners of the word, and it’s fun watching Laura Braga channeling this visual distinctness. Her take on the 90s League is spot on with everything from Hook-for-a-hand Aquaman to the overly Gothic Bat suit. In many ways Dark Crisis: Young Justice #2 feels like an aesthetic love letter to 90s DC, and it’s fantastic. 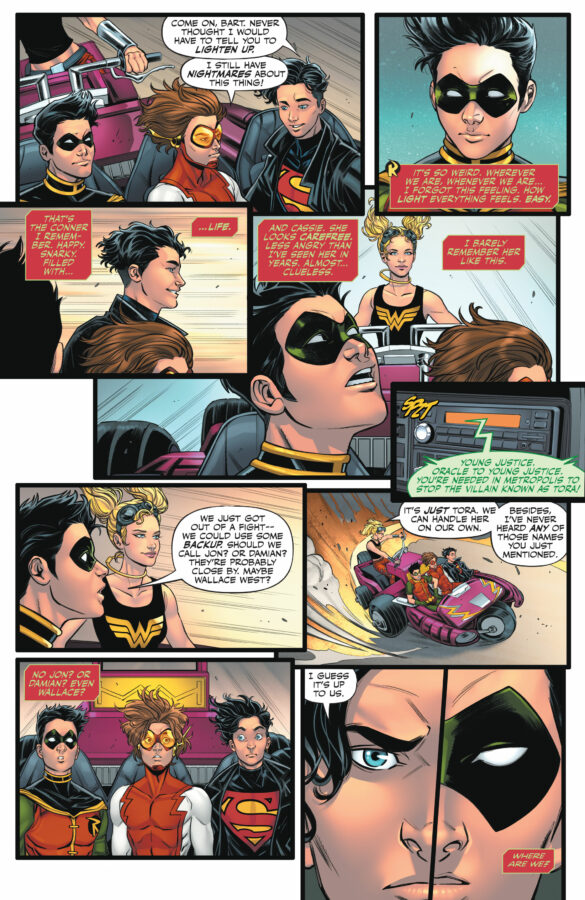 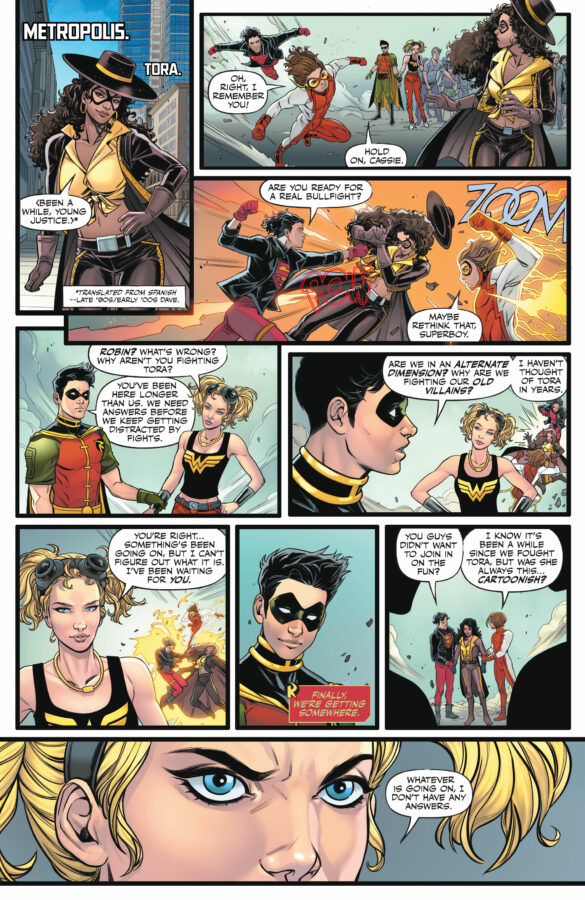 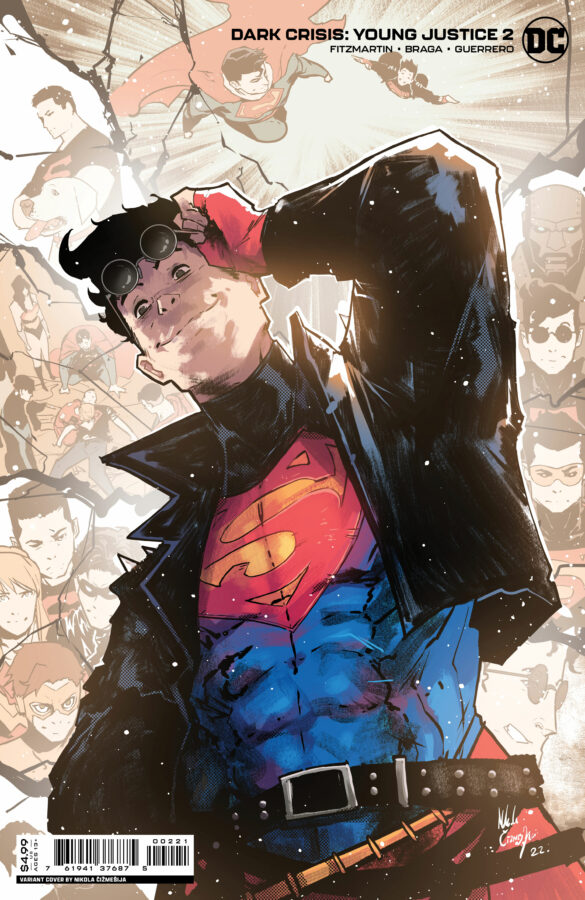 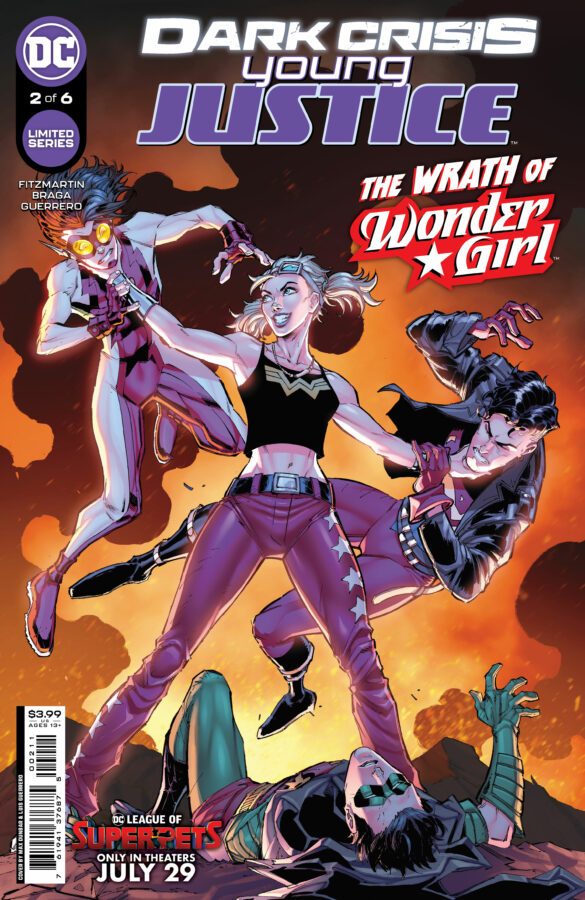 My one slight qualm with the book is that there were a few moments where I felt like the paneling was counterintuitive. There were moments when I couldn’t quite figure out which panel I was supposed to read first. However, this is a small issue that didn’t impact my overall experience of the title.

Dark Crisis: Young Justice #2 is a thoughtful, fun tie-in that thematically fits into Dark Crisis but, as of now at least, isn’t directly connected. Themes of legacy, history, and nostalgia permeate the issue, as Fitzmartin delivers an interesting examination of identity politics through the lens of history. Braga’s 90s art style adds an air of authenticity to the book that will have many in their 30s, or older, smiling.

Final Verdict: It’s both thoughtful and engaging. If you like these characters, you’ll enjoy seeing them in this title.