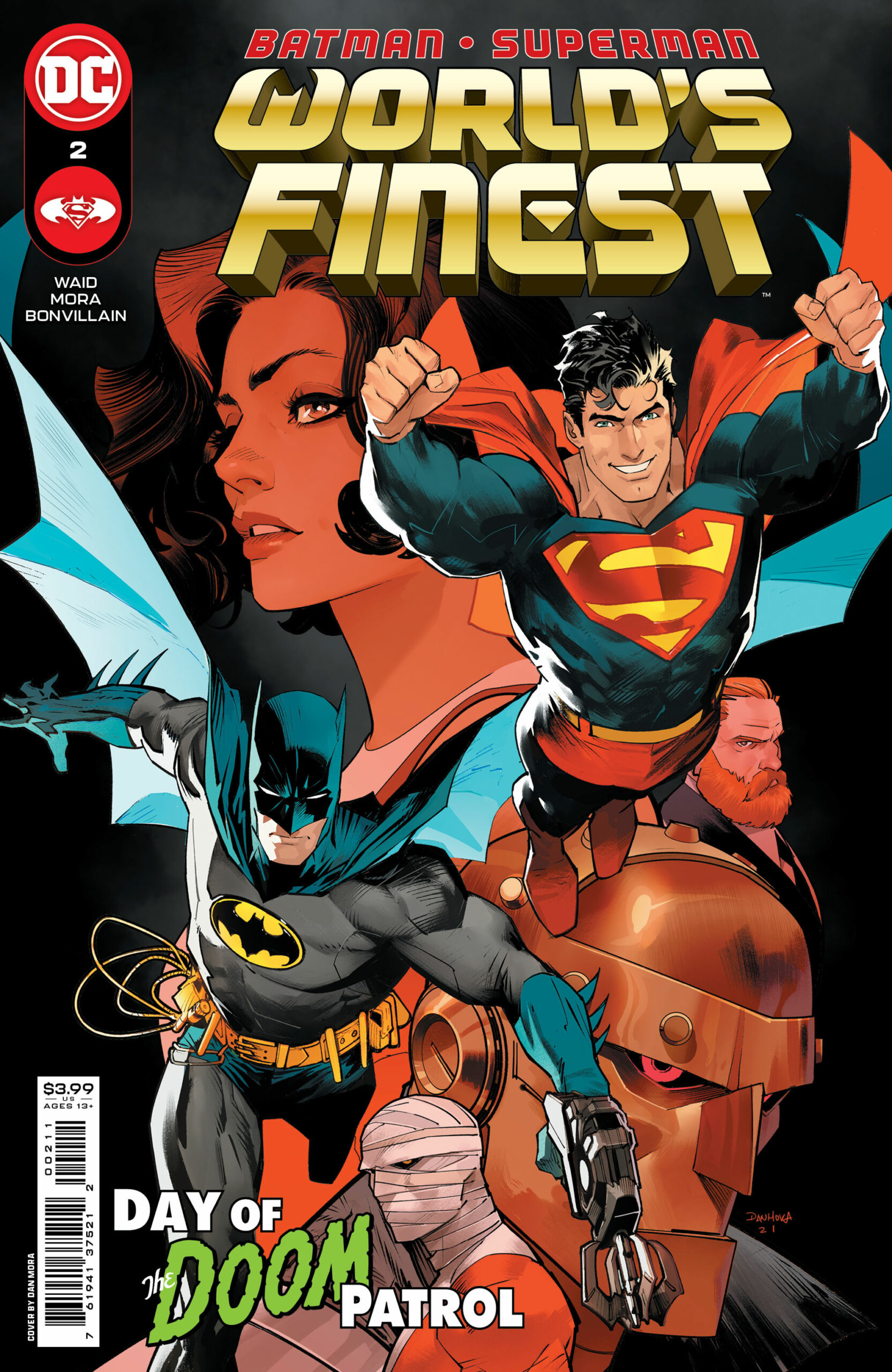 Superman undergoes open-heart surgery, as Batman turns to the Doom Patrol for help in this week’s Batman/Superman: World’s Finest #2.

The Man of Steel has had better days; after getting ambushed by Poison Ivy and Metallo in last month’s issue, Superman was exposed to Red Kryptonite. Now, for those of you who aren’t Silver Age or Smallville buffs, this variant has a different physiological impact on Superman than its green counterpart. Rather than just weaken him or steal his powers, Red K warps Superman’s mind or abilities, on this occasion making him both delusional and more aggressive.

Superman lost his grip on reality and went on a violent rampage across Metropolis. Batman managed to subdue him and brought him to Niles Caulder: the leader of the Doom Patrol. Caulder, a scientist who specializes in bizarre physiology and fringe science, performs surgery on the Man of Steel, discovering that Superman has developed blood poisoning from his exposure to the Red Kryptonite.

Heads up, you can pretty much ignore the title of this book. Yes, Batman and Superman are the titular characters, but this hasn’t stopped Mark Waid from digging up other personalities from DC’s toy box. Beyond the aforementioned Doom Patrol, Waide also uses Robin, Supergirl, and Billy Batson. In fact, Dick Grayson and Supergirl’s interactions are a major highlight of the book. Seriously, it’s fantastic.

Waid’s dialogue is hilarious, as it quickly becomes apparent that Robin and Kara have a history and an awkward one at that.  Waid never directly spells this out, only offering tidbits through dialogue about what seems to be an utterly bizarre situation involving a monkey, an avalanche, and a server whom Supergirl may or may not have been flirting with. I want to read that story SO bad.

One thing worth noting about the script is that Waid makes a hard pivot about a third of the way through the issue. If I’m honest, it felt a bit disjointed. Suddenly, we’re introduced to a new villain named Devil Nezha. It’s not completely clear what this baddie has to do with the story at hand, though our heroes assume that Nezha is responsible for the Poison Ivy/Metallo ambush. However, Waid doesn’t explain how they come to this conclusion.

I’m not gonna lie, writing this section of my reviews month-in and month-out is going to be a challenge. I can already tell that Dan Mora’s art is going to be hard to review, as I’m compelled to recapitulate my thoughts from last month. At the risk of sounding repetitive, Mora’s work on this issue is fan-friggin-tastic. Waid’s script is “I-just-drank-five-energy-drinks” fast-paced, and what’s particularly impressive is that Mora’s art manages to keep up. The story has a levity about it that Mora magnificently captures in his character’s expressions. Batman actually smiles and it’s beautiful… though kinda weird.

What’s also impressive is Mora’s versatility as an artist. When Waid introduces Devil Nezha, he does so in a flashback of sorts, so when the scene of the story shifts, so does the style. Mora’s visuals go from traditional Superhero style to an East Asian/Chineses-esque aesthetic. The color artist, Tamra Bonvillain, lends a helping hand here, as the color pallet shifts also, further signaling to the reader that the issue’s setting has moved. Usually, when DC does this, they bring in a different artist to highlight the change; however, in this situation, they didn’t need to. Mora’s so talented that he can draw in a style that isn’t in fact his own.

As I wrap things up, I’m once again forced to repeat myself from last month’s review: Batman/Superman: World’s Finest #2 is unadulterated fun. There just isn’t a better description. Is the plot a little disjointed? Yes. Do I mind? No, not in the least. Waid’s heart and humor and Mora’s exquisite art make up for the somewhat clunky plot pivot.

I’ve determined that what makes this series so great is its commitment to fun. Waid and Mora set aside the dower melodrama of contemporary comics and embrace the child-like bombast of the Silver Age. It works really well.