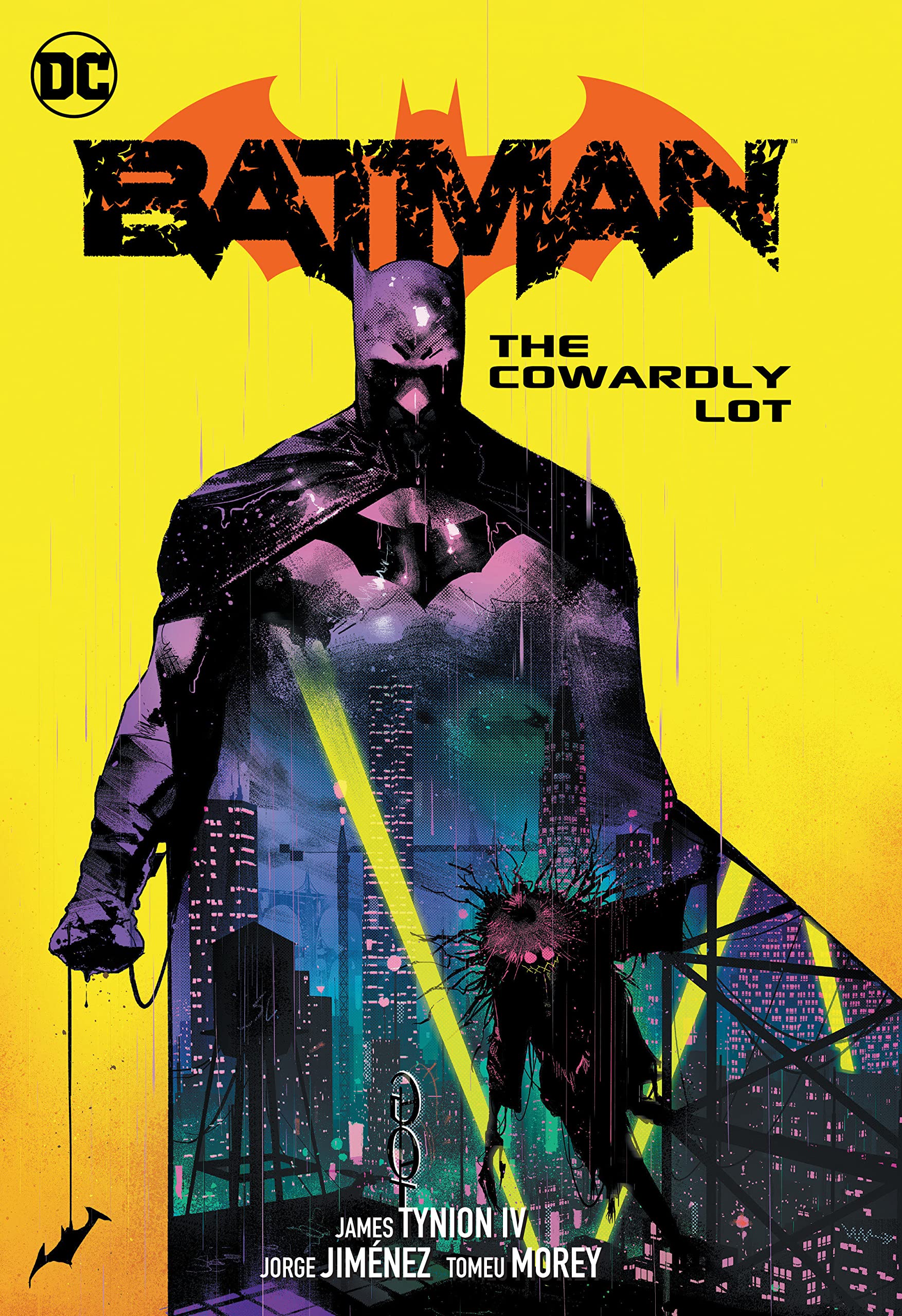 Batman: The Cowardly Lot collects a story from Infinite Frontier #0, and issues #106-#111 of the ongoing Batman title.

On initial release, these comics saw the main timeline and continuity of the DC universe put back at the forefront of the release schedule, following the excellent Future State era that had been the main focus over the preceding couple of months.

Whilst I thoroughly enjoyed the diversion into a different time and era, there was something about a return to the status quo that feels very welcome. It just felt right. Make no mistake, our time in that bleak future was thankfully far from over, but I for one was happy to see the resumption of Tynion’s vision.

Having all these issues in one lovely hardcover brought all those memories flooding back, and shows Tynion’s strength as a writer, because they work as well in one volume, as they did as monthly releases.

The bromance between our titular hero and Ghost-Maker is still very much in full swing in this book. Although he’s been something of a divisive addition to the Bat-Family, I’ve fully bought into the friendship on show between the two men. Anytime we get to delve deeper into Bruce Wayne’s years spent training to become the Dark Knight is very welcome, as it helps us to understand more about his journey to the cowl, how his skill set was formed, and how those he met along the way have influenced his way of thinking, and framed his ideology. Adding a protagonist that, whilst operating under a much harsher code of conduct, still shares a deep-rooted friendship with Bruce, is great to see. For a character that often stands as a man apart, to see genuine friendship is a refreshing change. Will it last?

Speaking of change, this arc sees an old arch enemy of Batman back in the game, in the form of a certain Dr. Johnathan Crane. Scarecrow has always been a favorite of mine, as he eschews any physical prowess for a more cerebral approach, clouding men’s minds in a manner that Lamont Cranston would be proud to call his own. Working in the shadows, his plot has yet to be fully revealed, but with higher intelligence, such as Crane’s, there’re always grand schemes and plans. Fresh out of a meeting regarding The Magistrate, all roads certainly seem to lead to the aforementioned Future State.

Speaking of The Scarecrow, has he ever looked more macabre and gruesome than this current iteration? Jorge Jimenez has created a version of Jonathan Crane that’s far removed from the Wizard of Oz style versions of yesteryear. Genuinely terrifying, this is certainly not anybody’s idea of a good doctor. As a depiction of a character that uses fear as the main part of his arsenal, this is spot on! A demented hybrid of Raiden from Mortal Kombat and a Plague doctor from the days of the Black Death, this is heady stuff that will linger long in the memory. One shudders just at the thought of him.

It has to be said that the art in this book is beautiful. The work of Jorge Jimenez is certainly a visual feast, and every page is absorbing, detailed stuff. His figure-work is second to none, with each character given their own distinct look, setting them apart from the other characters on the page. Working in perfect synchronicity with Tomeu Morey’s colors, moments of dark, shadowy intrigue contrast with explosions of vibrancy and kinetic combat. Even if Tynion’s wonderful words were removed, we would find that every picture tells a story.

A new addition to the proceedings is the character of Miracle Molly. A dayglo explosion of color, who feels like an interesting hybrid of Neil Gaiman’s Delirium, a cyborg, and a street urchin, it seems like this new character could have some mileage. Seeing right through Bruce’s tried and trusted Matches Malone visage, this is one smart cookie! At first, her true motivations aren’t 100% clear; is she a villain or something more? Either way, there’s a lot more here than meets the eye. Yes, she may be the genius engineer behind the Unsanity Collective’s mind- and body-altering tech, designed to create the perfect soldiers, but there appears to be a more altruistic side to her too. Taking Bruce on an odyssey through the city, her pitch of a new vision almost seems rational and logical to me.

After Scarecrow the main antagonists in this book are Simon Saint, and his pet Arkham Asylum orderly turned cyborg supervillain, Peacekeeper-01. Batman/Peacekeeper-01. The fisticuffs between the Peacekeeper and the Dark Kight are incredible. Every blow is massive, the pain is tangible, and the injuries are serious. What really comes through though, especially when viewed through the prism of the Future State era, is that the stakes are high, and Batman could possibly be outmatched here. Whilst we’re mostly accustomed to seeing the Dark Knight take control of his altercations, this feels different, as though it is a fight where he truly is in over his head.

I’m a fan of Tynion’s storytelling throughout his run. What he did so well is link together disparate threads, create multiple new characters that have plenty of mileage in them, and blend a multi-layered plot into a supremely engaging and absorbing read. The ongoing Batman book is the absolute flagship of DC’s output and requires the highest of standards, with nothing less than grade A talent needed. In Tynion, all of that is fulfilled and much more besides.

Batman: The Cowardly Lot is another highly consistent release that crams in a lot of content into its pages. We get art that explodes off the page, violence that packs a huge punch, plotting that’s enticing with a page-turning quality, and a real sense of peril and high stakes. This collection also includes all the variant covers from the run and needs to be at the top of everybody’s pull lists.

This story is also the prelude to “Fear State”, the final volume under James Tynion’s tenure as writer. Pick that book up too, as there’s no sounder investment to be made!