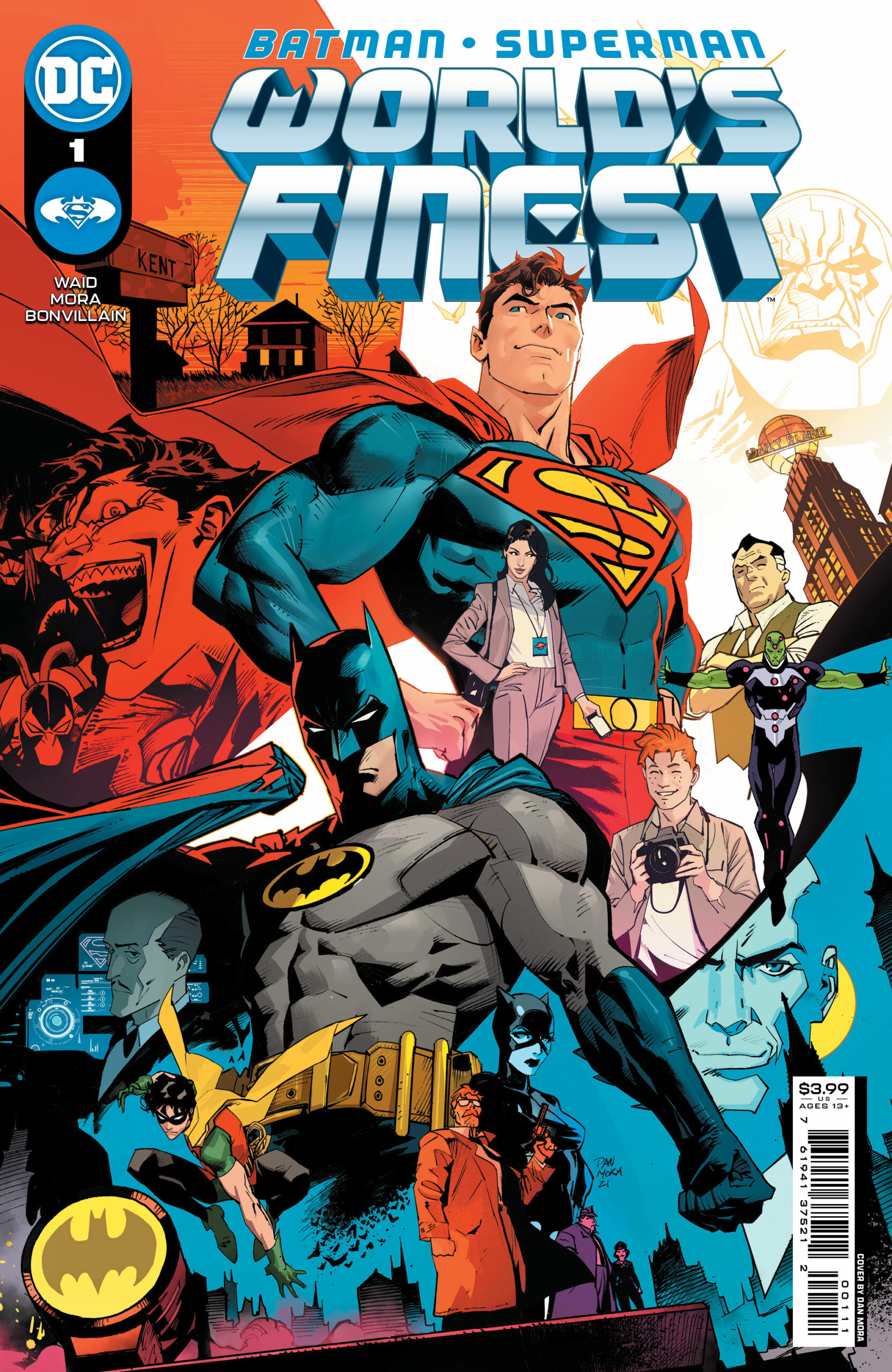 Superman goes bananas, as Batman and Robin do damage control in this week’s gripping debut issue of Batman/Superman: World’s Finest #1.

The story opens in Metropolis with Poison Ivy attacking the Daily Planet. Initially, everything goes according to plan for the leaf-clad femme fatal: chaos ensues threatening the lives of innocent bystanders. It’s a perfect recipe for attracting the fight-in-tights brigade. However, expecting Superman to intervene in the ever-sun-lit streets of Metropolis, Poison Ivy is instead confronted by the Dark Knight and the Boy Wonder. Needless to say, she wasn’t expecting these two creatures of the night to venture past the city limits of the gloom-soaked Gotham City.

Eventually, Superman does show up alongside Batman and Robin, but before the three heroes are able to formulate a plan, they’re ambushed by Metallo. It quickly becomes clear that this was a setup. Metallo injects Superman with a Red Kryptonite cocktail while Ivy detains Batman and Robin with vines. This sends the Man of Steel into a delusional, uncontrolled rampage that Batman and Robin have to stop.

Mark Waid has returned! Years ago, Waid reportedly had a falling out with Dan Didio, the longtime Co-Publisher of DC. However, Didio is gone, paving the way for Waid’s homecoming – and boy is it one hellova homecoming. Waid manages to pen a story that’s not only gripping but full of heart and humor. This should be unsurprising – it’s kinda his shtick.

One thing I should note is that this issue is distinctly set in the past. Therefore, Waid is largely unburdened by the invisible shackles of DC’s current continuity. He can literally tell whatever story he wants, and it’s apparent that he knows this. One of the more fascinating aspects of this issue is its blend of various different elements throughout DC’s history.

World’s Finest #1 feels like an updated version of a Silver Age comic. Seriously, I cannot remember the last time that anyone used red kryptonite (or any other color besides green) as a plot device. Nevertheless, Waid also includes other little things from different moments in DC’s past. For example, this incarnation of Metallo is ripped directly from Superman: The Animated Series – everything from his design to his motivation.

In contrast, this is clearly the Poison Ivy from The New 52 who is well acquainted with The Green from Swamp Thing. At the heart of it all, though, is the Batman/Superman relationship. Wade uses various flashback sequences to establish their friendship; one rooted in deep respect and trust, knowing that each has the other’s back. This level of nostalgic optimism and positivity harkens back to the good ole days when comics were 25 cents a pop.  Like I said – it’s very Mark Waid.

Unsurprisingly, Dan Mora brings his A-Game (does he even have a B or C game?) for this book. Mora takes Waid’s fast-paced script and renders it in the comics equivalent of hi-def. The book is stunning. Here we have an artist who takes all of the aforementioned creative choices and draws a comic that instantly transported me back to my childhood, but without making the issue feel dated. His paneling has a modern sensibility, deviating from the traditional 9-panel frames and his action sequences are dynamic, as they propel Waid’s narrative forward.

Then there are the aesthetic choices for the heroes. The Bat Symbol is the Keaton/Burton symbol from Batman 89′. Meanwhile, Robin (assumably Dick Grayson) is in his New 52 design, having abandoned the green speedo for a far-more tasteful pair of green tights. Of course, Superman is in his classic red trunks. All of these designs create a timeless feel to a brand new comic that has all the makings of a classic.

World’s Finest #1 is unmitigated fun. Waid is a master storyteller whose script displays his deep love and affection for these characters while Dan Mora manages to channel Waid’s love and nostalgia into a visual product that utterly pops. If issue one is any indicator, DC’s got a hit on their hands.

Final Verdict: What we have is 32 pages of distilled nostalgia transmuted into a giant love letter for the world’s greatest heroes.