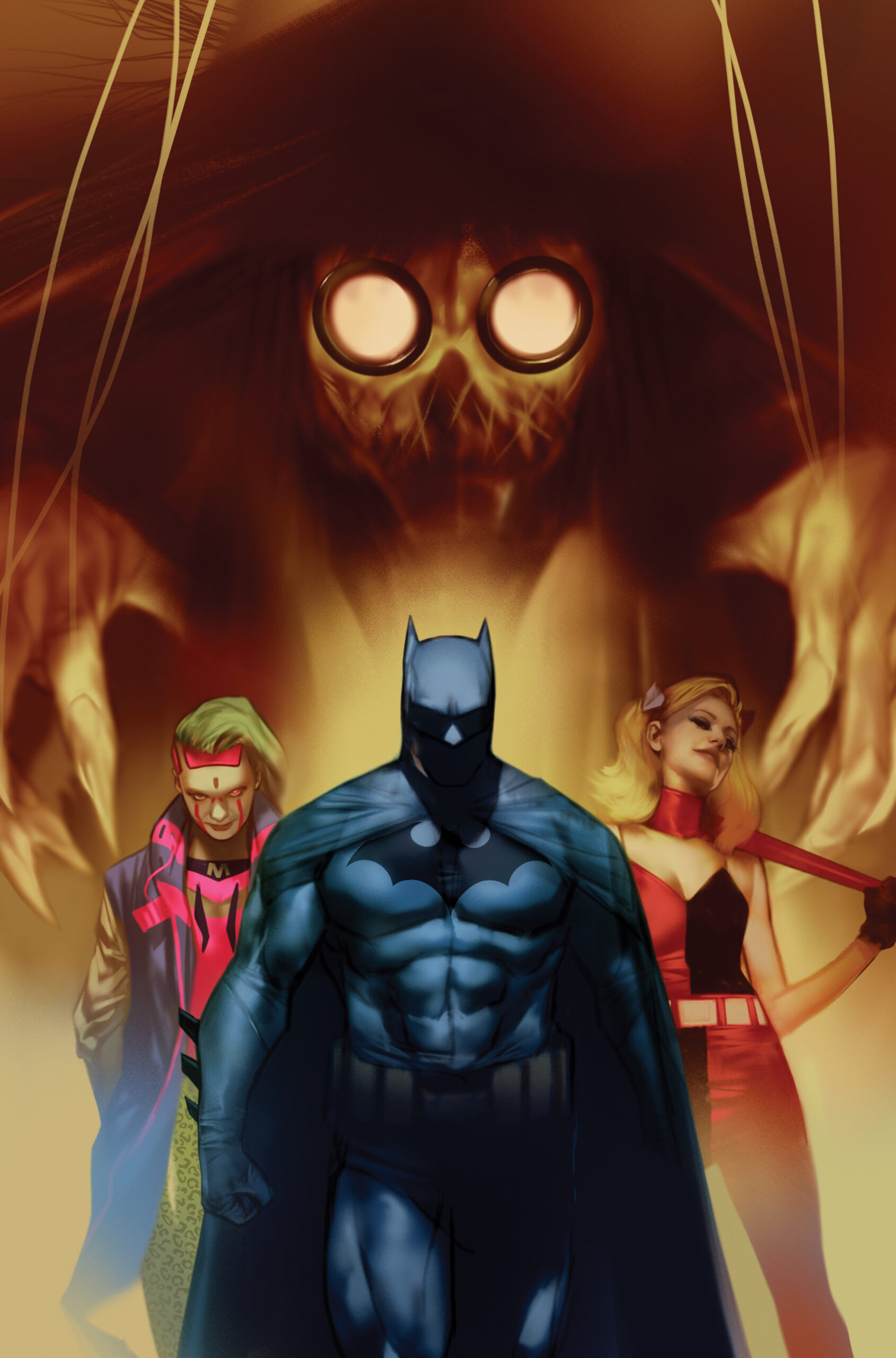 The book is available to pre-order now and goes on sale on Tuesday, April 26th.

James Tynion left this series with a bang. It’s hard to believe that his tenure only ran from an epilogue at the end of Batman #84, through 33 issues of the series, from #85-#117 inclusive, and a few crossover specials, between December 2019 and November 2021. In those three years, he introduced and co-created a veritable host of characters that have earned their place in the Batman hall of fame: Punchline, Peacekeeper-01, The Gardner, Ghost-Maker, Clownhunter, Miracle Molly, and The Unsanity Collective… most of whom make appearances in this brilliant collection.

Right from the start, this book grabs you with brilliant dialogue and characterization from the writer, along with stellar art from Riccardo Federici and Chris Sotomayor. These talents give this Batman saga a whole new look compared to what came before. Federici’s art is a treat, particularly the characters’ facial expressions. His take is realistic and not typically comic book in style, and Chris Sotomayor’s colors enhance that feeling of realism.

This Story follows on brilliantly from Batman: The Cowardly lot, as it sees the Simon Saint’s manipulation of Gotham’s governing body and its citizens go into overdrive, while batman continues in his struggle just to stay sane.

The media plays a huge part in our daily lives so this comic book tale heightens the feelings of an all-too-real sense of a Big Brother society taken to the extreme. I live in London, which is allegedly the most highly surveilled city on Earth, so I know that someone’s always watching. This is high-octane fantasy, but it holds a warped and wonderful mirror up to society.

Scarecrow’s toxin, in conjunction with Mad-Hatter’s mind control technology, have wreaked havoc on the Dark Knight’s sanity. In the past, there’s always been a cure or antidote, but having a villain control you with your own thoughts, and using your own voice will break anybody. Well… almost anybody.

Batman has always been in control, so seeing him lose that control is scary indeed. He’s been broken physically and mentally before, but this time the influence isn’t just affecting him; the entire population of Gotham City, and his physical foe, Peacekeeper #-01, are being similarly manipulated.

The bulk of this book (oh, joy!) is illustrated by the incomparable Jorge Jimenez. His is a talent that never disappoints, as his composition, storytelling, action, and characters always look incredible. Of course, he’s ably abetted by the equally talented Tomeu Morey, a man whose color art can go from hyper-realistic to psychedelically bonkers from one panel to the next. This is one of my favorite art teams ever.

Yes, the one-shots and specials that are also collected in this Batman: Fear State Saga collection are also visually excellent, but they mainly perform the task of giving us origins, back-story, and a prologue and epilogue to the main tale. As such, they should, and do, have a completely different style and flavor to the main narrative. The fact that Jimenez and Morey are behind 90% of the core of the book, gives a cohesive feel to the proceedings that’s very welcome indeed.

I love that we get an in-depth look at the lives and histories of Peacekeeper-01, Miracle Molly, and The Gardener in this collection. I love all these characters and am glad that they, and many of Tynion’s other creations, still appear in the Batman books, even after his departure.

It’s also great to see Harley Quinn as a bonafide hero, the continuing evolution of Poison Ivy, and awesome guest appearances from Barbara Gordon, Cassandra Cain, Stephanie Brown, Nightwing, and even cameos from a certain Tim “Jace” Fox. The way this book and its predecessor both tie into the “Future State stories”, yet take us on an all-new journey too, is incredibly entertaining and extremely satisfying.

This is an epic saga that’s incredibly well-written and beautifully drawn. Kudos also to the amazing letterers, without whom we’d actually have nothing to read. Every sound effect, Clownhunter and Scarecrow’s unique dialogue balloons, and every digital cipher and word placed on these pages are a delight to behold.

Batman: Fear State Saga concludes a classic era for Batman. Creative teams come and go, whilst the Dark Knight must endure and continue to be DC’s flagship hero. James Tynion’s runs on Detective Comics from 2016-to 2018, and his three-year tenure on Batman both rank among my all-time favorites. I highly recommend picking up Batman: Their Dark Designs, Batman: The Joker War Saga, Batman: Ghost Stories, Batman: The Cowardly Lot, and this stellar volume, as a five-book collection par excellence.