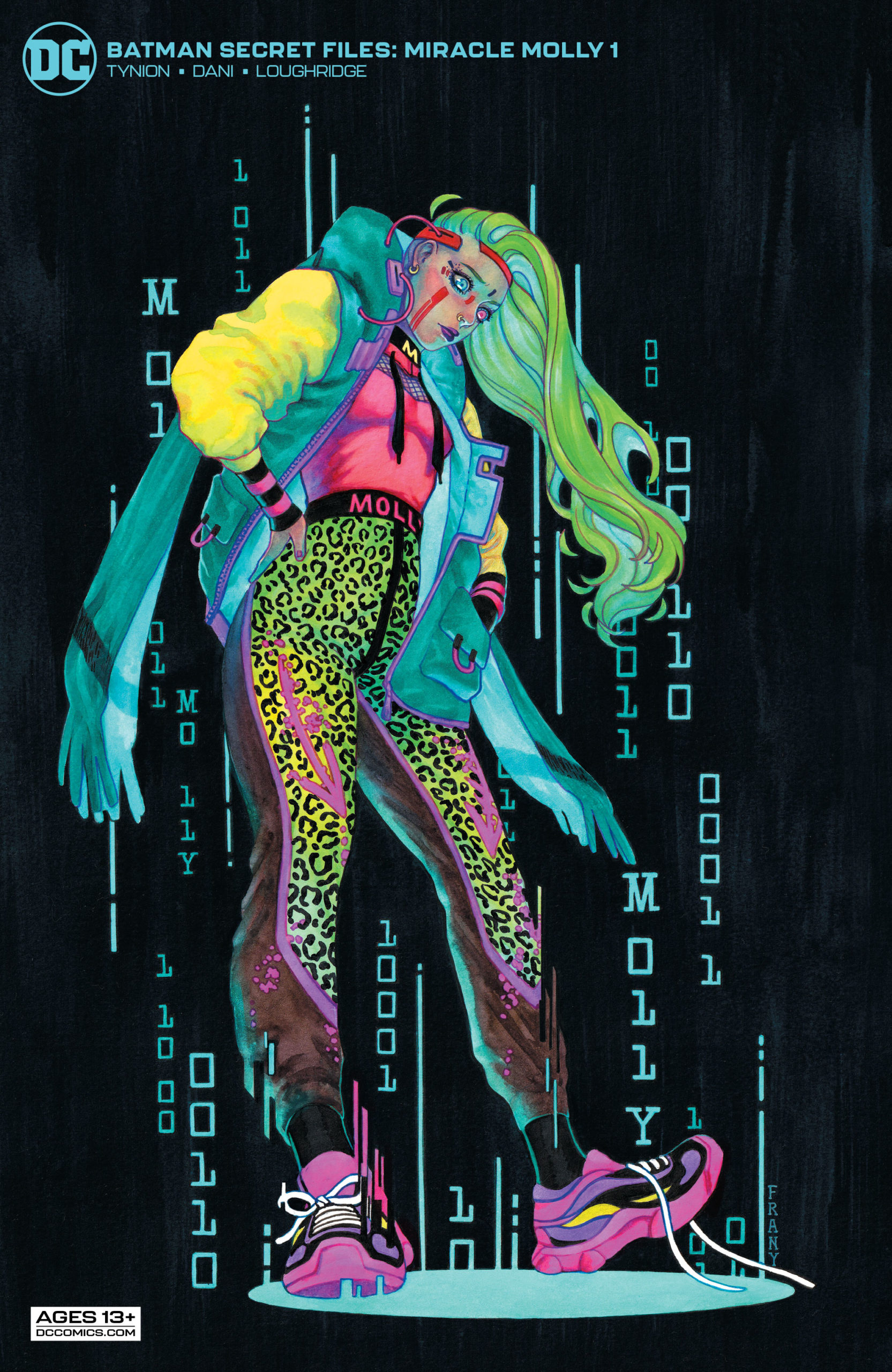 What a treat for the eyes! James Tynion IV brings us more background on one of the new and most colorful new Gotham characters, Miracle Molly. The writing and art are fantastic in this latest issue of Batman: Secret Files.

After introducing the new villain, Punchline, along came a crowd of new characters, Clownhunter, Ghost-Maker, and Miracle Molly. Ever since her dynamic Gotham City debut, Miracle Molly has been a stunning sight for readers, as her costume design is one of the most gorgeous and eye-catching there is. In this month’s issue, we delve into an adventure with the tech wiz, alias Mary Kowalski.

Everyone loves a good cyberpunk character, and Miracle Molly is highly captivating; not only through her design but also with her ability to modify tech and develop wearable technology. Her UI interface might not parallel Batman’s, but it’s close, and it’s no wonder that she’s received her own issue of Batman: Secret Files. The Dark Knight had better keep an eye on this one!

Molly’s outfit is beautiful. The iridescent colors are captivating, and I’d buy this issue on the strength of the cover alone. It’s very unique, as it gives off some serious cyborg-tech vibes. Trying to understand her moral compass is also fun:

Unsanity is the only real path to freedom in Gotham.

While vigilantes usually base their missions on revenge, and often maim, or even kill those who throw the first punch, Miracle Molly’s also interested in mind-games, which makes her that much more powerful. She doesn’t just fight with her fists, but with her intelligence. It’s clear to see that she’s cunning.

In this issue, we attain a bit of insight into who Miracle Molly is. She’s faced many of the issues that women face in modern society, such as her well-rounded ideas going unheard at the workplace. She has an ignorant boss who berates her as well as a judgemental and neglectful husband. Her life appears to at first be very mundane, yet, in secrecy, she allows her genius-level intellect to thrive. She’s also aware of the fundamental equations that are holding her back. Although her tale is a common one, that frequently gets rehashed in comics, it’s still good to bring these subjects into the conversation, as there are still many inequalities and injustices around.

It was enjoyable to read about her bringing up how much she wants to break out of this cycle, and how a broken system keeps her in a place of misery, as it does many others. It makes sense for her to be designed like a queer icon because often it’s the oppressed who are the ones that are treated most unjustly. She’s earnestly searching for any option to get out, and she values her mind above all.

This is one of the most stunning issues of the series thus far, and the colors are astonishing. In a city like Gotham with all the characters that reside there, that’s saying something. Lee Loughridge, who also provides colors for Batman: The Adventures Continue, really brings his A-game. The rainbow aesthetic is quite reminiscent of how possible Mary Kowalski might be queer-coded. In addition, she speaks using a lot of activism dialogue (broke system, cycles of oppression) and she looks like something straight out of Gundam Seed. It’s difficult to incorporate a robotic design into humans, but the artistic team-up does it well.

The shifts between yellow hues, and blues, to full-blown colors, are captivating. When they show the boring life of Mary Kowalski, Lee Loughridge and Dani highlight how much her life is at a standstill. Whenever she’s in the presence of the people who doubt her and let her down, they use solid, muted colors. However, when she’s fully herself, challenging the corrupted citizens of Gotham, she’s in the full rainbow… and I’m just like, “YES!” I think the art in this issue has done incredible work. Her bright hair, her cybernetic design, and all the allusions to a cyber world are very entertaining.

If you wanted to know more about Miracle Molly, a brand new character in the DC universe, that’s a treat for the eyes, then this issue’s for you. It’s great to give new heroes and vigilantes a good introduction, and a chance, just like the Justice League often does. It seems characters in the Secret Files have suffered grave inequalities, which, like The Joker said “all it takes is one bad day.” Although currently, her alignment is villainous, all she wants is to break a system that isn’t working anymore. Gotham doesn’t just suffer from criminal corruption, but societal as well.