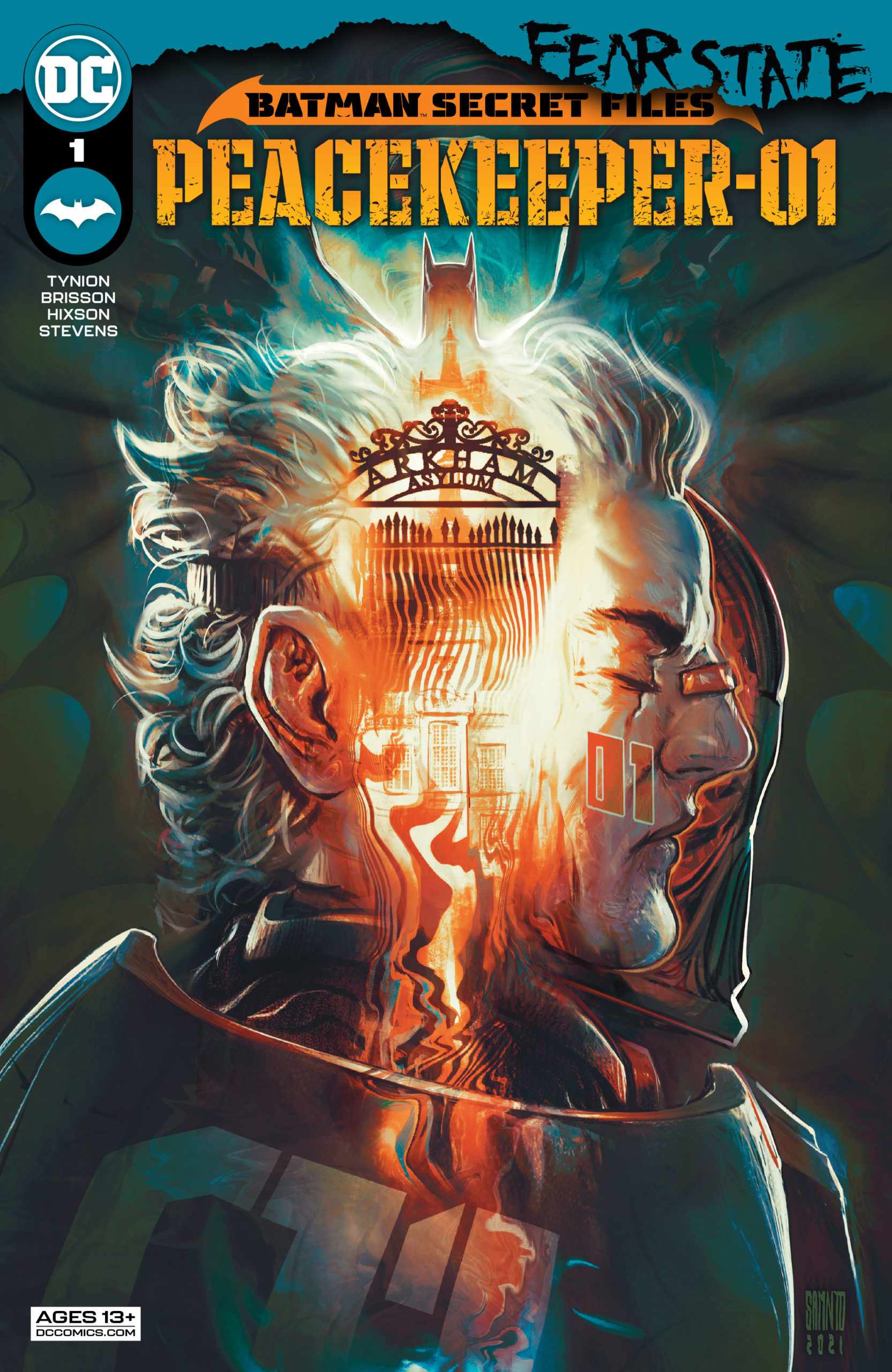 Batman: Secret files: Peacekeeper-01 is the latest release and it’s a Halloween-esque comic. This new and unique anthology series has been giving Batfam fans a look at new members of not only potential Bat-family members but also those that define and create Gotham.

James Tynion IV an Ed Brisson have given us us a neo-Gotham origin story with Batman: Secret Files: Peacekeeper-01 #1. We finally get the lowdown on Sean Mahoney II, as we watch him fall into madness. It’s a very fitting genesis for a Gotham vigilante and villain.

While other issues in this series gave us vigilantes and more anti-hero characters, this character is mad, bad, and dangerous. Sean Mahoney has been impacted by Joker venom, and we see him descend into madness. Tynion and Brisson have a great hold on creating characters who often question their surroundings and identity, which makes for brilliant story arcs.

Peacekeeper-01 is warned that he’s been injected with a lethal dose of Joker venom, and during his trip into a psychotic state, he pulls readers into family flashbacks of ancestors who were victims of capitalism, as blue-collar workers. The message is that the rich folks, people like the Waynes, would take advantage of the poor, less privileged, and those who have little to no access to good housing, education, and money.

There’s a running theme in Batman: Secret Files, often these characters are forced into becoming morally questionable vigilantes, anti-heroes, and villains due to inequalities in the American system. This is an arc that’s been relevant throughout time. It’s important to note that this issue states that this isn’t just an American problem but a global one. Financial inequalities have always held people back, and brought on pain and trauma to those who suffer at the bottom, or sometimes even middle sections of the system.

The story’s interesting, as the switch between Peacekeeper-01 and the flashbacks gives the readers a fun pace to keep up with. The writing is captivating and well done, especially to bring us a new character.

Commissioner Jim Gordon’s a sight for sore eyes in this series, as he has an empathetic role, and is honestly the only cop I’ll ever stan. His lines are well written and they bring real humanity into the story. He knows that citizens are suffering, so he tries his best to reach out.

The art brings us a very neo-Gotham look, and I love the art that this series has been pulling out. It’s Joshua Hixon’s first full issue for DC Comics, as  he handles both the pencils and inks. His characters’ expressions are full of emotion and flavor. The intense red-filled and yellow-hued pages give the reader a sense of separation and urgency, as Peacekeeper’s family has been taken advantage of by the wealthy citizens of Gotham. The art brings us emotion and intensity.

As a newer character introduction, this issue was a fun one to read. We’re given more of a back-story into the city of Gotham, and the people it was built on. Gotham city itself is her own living, breathing character in DC Comics, and one that Batman (and Bruce Wayne) is absolutely enamored by. Getting insights into her creation is always interesting.

The character of Peacekeeper-01 is fascinating as we get to see his creation, and the journey of those impacted by Joker venom has to be a sad but captivating journey. This is a dangerous chemical that triggers severe psychotic symptoms. If you’re a fan of villains and their origin stories, as well as a Neo-Gotham look, particularly if you’ve been following Batman: Secret Files, “Future State” and the current “Fear State”, then this is certainly an issue you won’t want to miss.