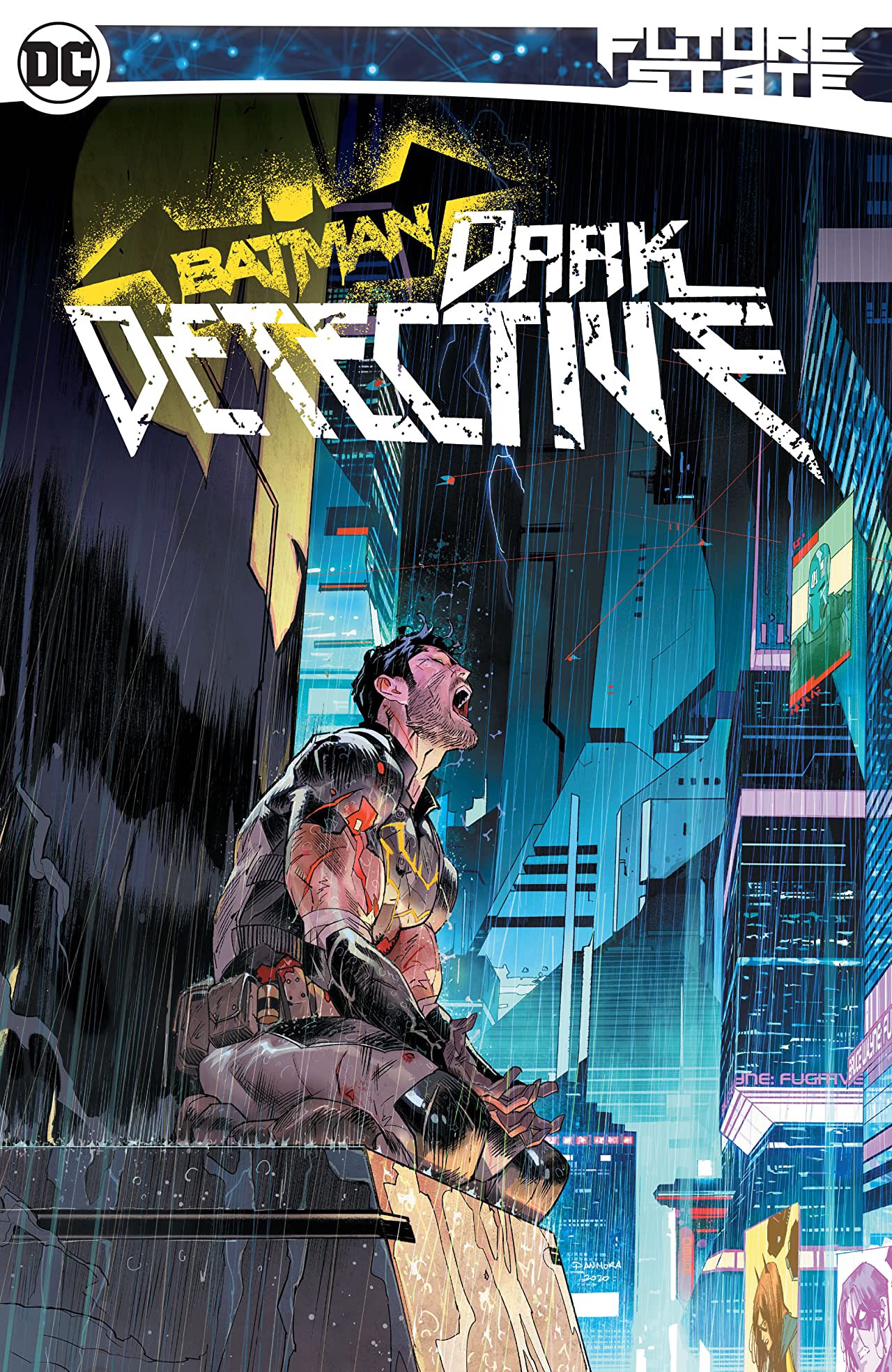 Future State: Batman: Dark Detective is a great value 344-page trade paperback. It collects issues #1-#4 of Dark Detective, issues #1 and #2 of Future State: Batman/Superman, Catwoman, Harley Quinn, and Robin: Eternal, plus all the backup stories from these titles. Also included are a selection of covers plus sketches and character designs. It’s another truly Bat-Tastic collection.

We come into this story right in the middle of a mystery, and enough breadcrumbs are dropped by Mariko Tamaki to get your imagination fired up. With our hero on the wrong side of the mysterious Magistrate and the ominous Peacekeeper-01, this future feels dark, indeed.

The mix of existing characters and brand new ones is perfectly balanced, which is something that should satisfy old fans, and brand new readers alike.

If I’ve said it once, I’ve said it a thousand times: great writing with bad art doesn’t work for me; likewise shoddy stories with amazing artwork. I’m extremely happy to report that the art in Dark Detective is every bit as terrific as the writing.

I’ve loved Dan Mora’s art for years, and his version of Batman is absolutely awesome. I didn’t think I’d ever like a Batman without a cape… I was so wrong. This costume, in all its homemade glory, has already become one of my all-time favorite Batman uniforms. It’s practical and extremely cool. Jordie Bellaire’s Tech-Noir/Blade Runner-esque colors are simply sublime, too. I love that whole “five minutes in the future” feel to this book. You know this isn’t set now, but as there’s no actual time frame, or date mentioned, so I think this book will age very well in years to come.

Seeing Bruce Wayne without his millions, just using his wits, training, and a homemade bat-suit is a source of joy. Seeing it beautifully drawn by Dan Mora (Wow, just… wow. Check out the flashbacks!), gorgeously colored by Jordie Bellaire (who’s also responsible for the colors on the Red Hood back-up strip), and innovatively lettered by Aditya Bidikar, only adds to the enjoyment. I’m loving this creative team.

Another thing that‘s making me happy is Bruce’s supporting cast. Seeing Batman renting someone’s basement is amazing in itself, but meeting his roomies has blown me away. What a great cast of characters! 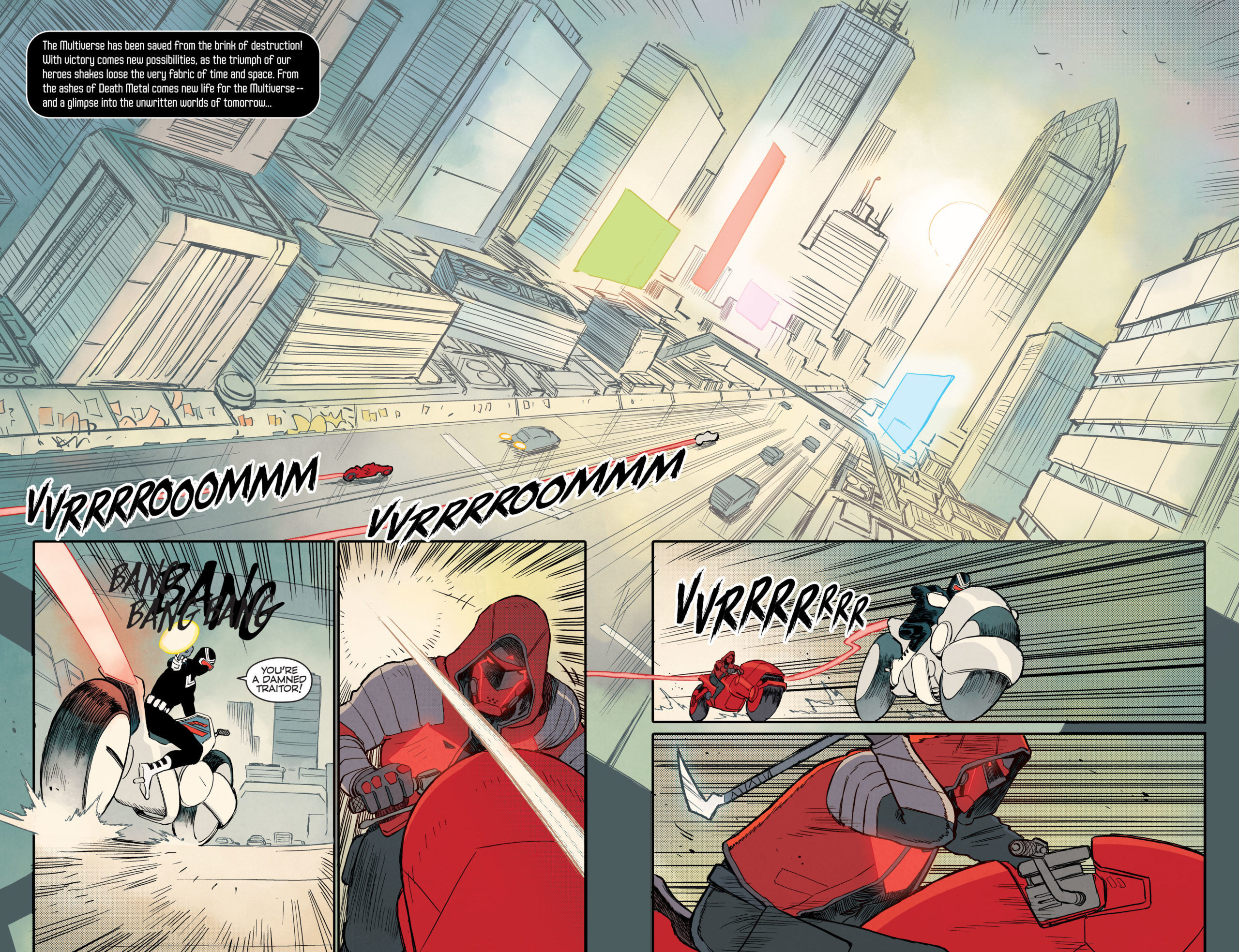 The Red Hood tale’s great fun too. Joshua Williamson is a tried and tested star, so his take on Jason Todd was bound to be a good one. While Jordie Bellaire’s colors are impressive and completely different from her style on the lead strip, sadly Giannis Milonogiannis’ art doesn’t quite do it for me. Don’t get me wrong, his layouts are great, and his storytelling is on point, but his style just isn’t the kind I like. It’s a little cartoony and has a Manga feel to it. I know that many people love Japanese comics, and I’m sure that they’ll get a kick out of Gianni’s style, but it’s not my thing. He’s clearly a very talented artist, so this is just about personal taste, and preference. His monochrome art on the current, ongoing Future State: Gotham works a lot better, though.

Troy Peteri, as always, delivers great letters. Like Jordie, he adapts his style to fit the tone and feel of the art, elevating every strip he works on.

This tale is whacky, weird, and comes totally out of left-field. Gene Luen Yang mixes super-heroics, action, and body horror brilliantly, and his superb imagination only carried on into his ongoing Batman/Superman series, which I feel ended far too soon. The art in this two-parter is cool, but I feel it would’ve been better if the same team had drawn both chapters. I did feel a change in style which took me out of the story, a little.

Arif Prianto’s color work and Tom Napolitano’s lettering were, as always, outstanding. The artist changeover would’ve been even more noticeable if these two incredible pros hadn’t added their flair, creativity, and talent to the story. The color and lettering did ease the transition considerably.

The way ahead seems bleak. It’s dangerous to leave our homes and the economy is in the toilet; and that’s today, in the real world. The state of Gotham City in Future State: Catwoman is even more severe. In this story, we’re given the vision of a city being evacuated and Batman dead, but we could see a shining figure to light the way for those in his shadow.

Otto Schmidt’s gorgeous, quirky art style and colors do wonders for making this future seem lived in, and full of despair. We get deep, muted blues of winter cold around the streets of an apparently abandoned Gotham. There’s a great action sequence inside a train where the tight panels and vibrant reds make everything feel all the more claustrophobic. This tale draws us in with the visuals we’d expect from an uncomfortable future train ride.

Harley finds herself face to face with an old friend once captured by the Magistrate’s forces. It seems Jonathan Crane has found a new life and purpose under the new regime (as we’re slowly discovering in the current “Fear State” crossover) and has taken down the remaining menaces in Gotham.

The artwork in this story, by Simone Di Meo and colorist Tamra Bonvillain, is spectacular. I love the way the images just feel so alive like you’re watching an animated feature. The futuristic style that you can see, not only in the characters themselves but also in the architecture and the backgrounds jumps off the page. Even Harley’s hair is absolutely adorable.

This story gives me favorite Robin, but like we’ve never seen him before, and, not only do we get to hear about the final fates of some of the Bat-Family members, we even get to see a handful of them, including a We Are Robin favorite, in a brand new light.

Writer Meghan Fitzmartin has impressed the heck out of me with her spot-on characterization, and her love of comics. Someone else is a fan of the We Are Robin gang too! I shouldn’t be surprised, because as someone who loves Supernatural, and DC Superhero Girls, I already knew that Meghan was a terrific writer coming into this series. This lady knows her comics lore! What she’s done with the character since, in Batman: Urban Legends, has been ground-breaking, and wonderful.

Not only is my favorite Robin back, but he’s being drawn by the art team that drew him so well during the Rebirth era run of Detective Comics; Eddy Barrows and Eber Ferreira. Not only are these two a tried and tested penciler/inker superteam, but they’d also already made their take on this guy one of my favorites ever before this book was even a thing!

Not only are their character designs great, but this future Gotham is a sight to behold. Adriano Lucas’ colors really make the line art really pop, and this neon nightmare of a city truly feels futuristic, while still maintaining the dark gritty feel we expect from the home of the Bat-Family. The lights, the shadows, the rain… reading this story’s like having a comic that’s been directed by Ridley Scott!

Reading these stories back in January and February was great fun, but seeing how this dark future is being built in the present, by many of the same creative teams, has added even more weight and power to them. This book is great value, terrific fun, extremely clever, and gorgeous to look at.

Babs, Cass, and Stephanie to Star in ‘Batgirls’ Monthly