Tim Drake’s Robin has come out as bisexual in the latest issue of Batman: Urban Legends.

In the story titled “Sum of our Parts”, Tim had to rescue his close friend Bernard Dowd. Over the course of the rescue Bernard surprises Robin when he declares that he hopes for his friend Tim to finish their date.

Please tell Tim Drake. He helped me realize my true self. Who I am… I wish we could’ve finished our date.

That leads to Tim having what he calls a lightbulb moment. After the crisis is adverted, Tim returns in his civilian guise to Bernard, who proceeds to ask Tim out on a date, with Drake accepting. 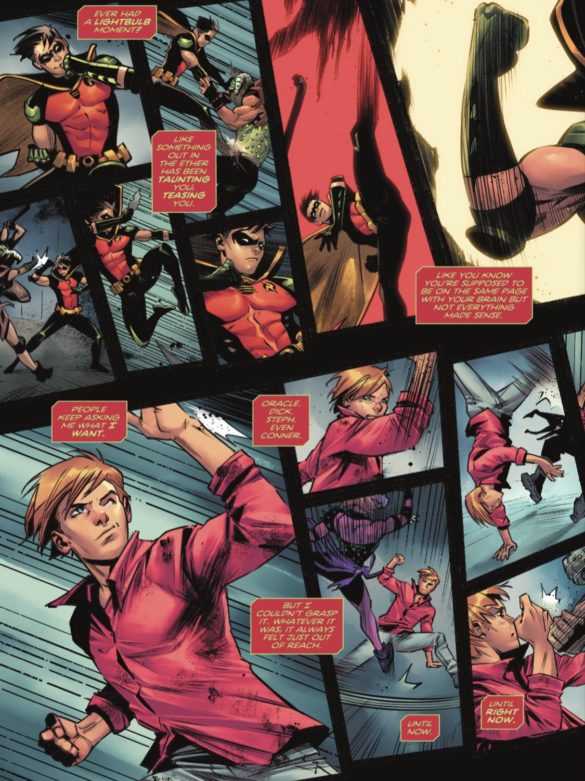 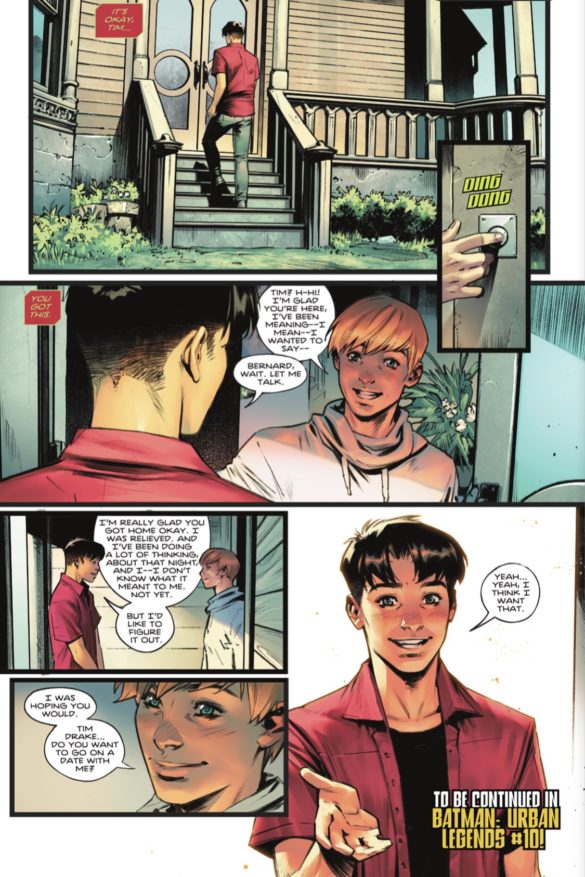 To some fans this revelation may come as a surprise, while others have found that Tim’s constant overthinking and over-intellectualizing are signs of someone who could be struggling with their sexuality a little bit.

Regardless, this now makes Robin a part of a small group of canonically LGBTQ+ DC characters. Other notables include Midnighter, Harley Quinn, Poison Ivy, Renee Montoya, Maggie Sawyer, Batwoman, Alan Scott, and Obsidian. The big catch is that Robin is arguably the most well-known character to the general public.

“Sum of Our Parts” creators  Meghan Fitzmartin and Belén Ortega have reported praise for the story reveal.

My goal in writing has been and will always be to show just how much God loves you. You are so incredibly loved and important and seen. Forever grateful to be trusted with Tim Drake and his story and honored to work with the amazingly talented @BelenOrtega_ and @loquesunalex 💗 pic.twitter.com/h2BMotX0Iq

#Batmanurbanlegends #6 is already out and with it our last chapter of “Tim Drake: sum of our parts”. It’s overwhelming all the comments and love I’m receiving from you guys, thanks for your support on my very first series with @DCComics ♥️

Even the granddaughter of one of the DC Comics co-founders showed her appreciation for Tim coming out. Dana Wheeler-Nicholson expressed how she feels Tim’s reveal is a logical storytelling progression.

According to an interview with TMZ, Wheeler-Nicholson reportedly praised the story for normalizing queer culture with such a renowned character.

That sounds like a good seal of approval for Tim!