DC has revealed the details surrounding the global celebration of Batman Day 2021 on September 18. This year’s event will be headlined by two breakthrough releases, BATMAN: THE AUDIO ADVENTURES and BATMAN: THE WORLD.

DC and Warner Bros. will recognize the iconic character’s longevity and impact across comics, film, television and more, with a massive collection of partnerships, special releases, and initiatives in honor of the Dark Knight.

BATMAN: THE AUDIO ADVENTURES AND
BATMAN: THE WORLD SET THE STAGE FOR A
GLOBAL CELEBRATION OF THE DARK KNIGHT
ON BATMAN DAY 2021

The fight for justice goes global to honor the enduring legacy of the iconic Super Hero on Batman Day, Saturday, September 18, 2021. Headlined by two breakthrough releases, BATMAN: THE AUDIO ADVENTURES and BATMAN: THE WORLD, DC and Warner Bros. will recognize the iconic character’s longevity and impact across comics, film, television, and more, with a massive collection of partnerships, special releases, and initiatives in honor of the Dark Knight. 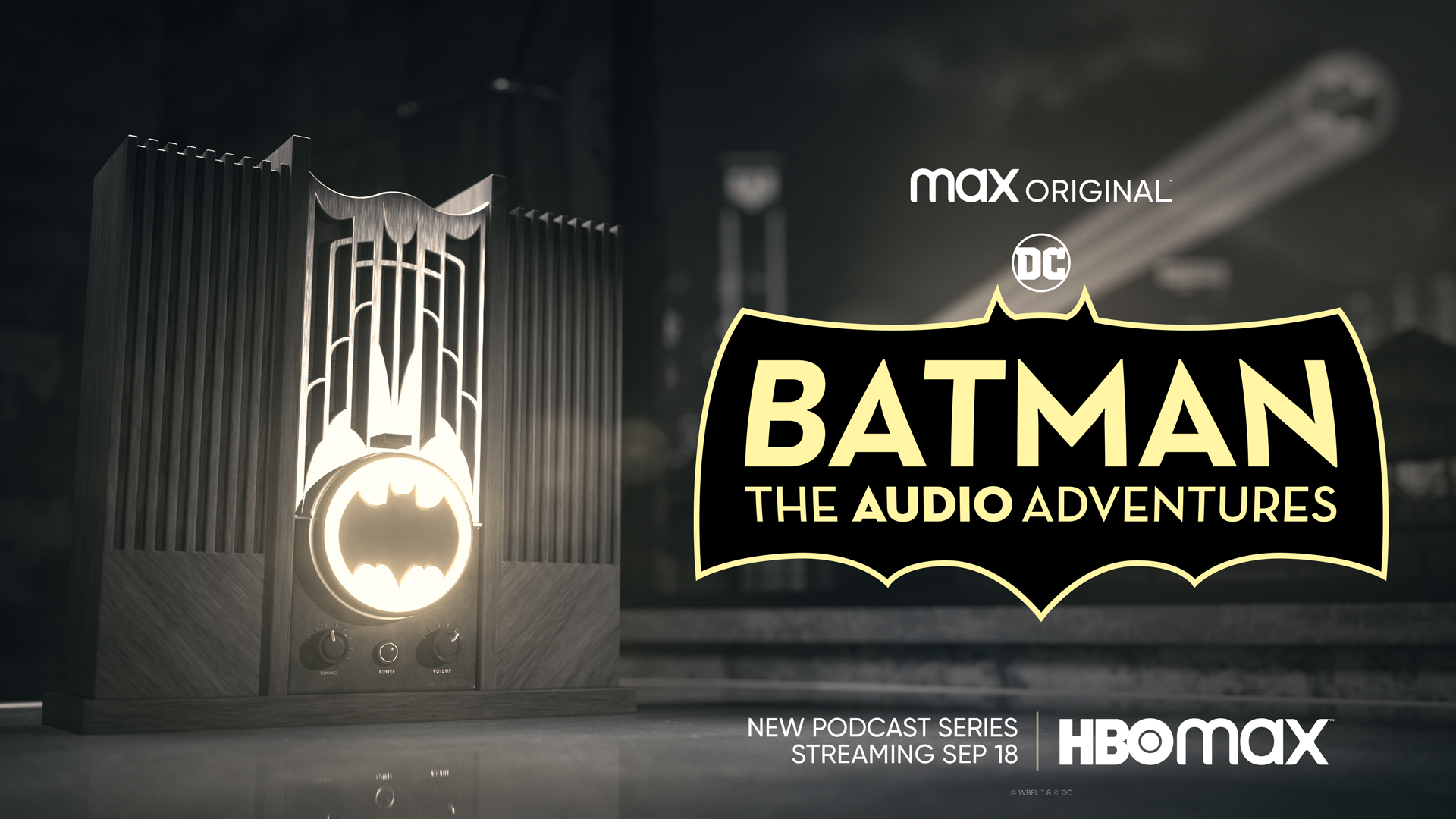 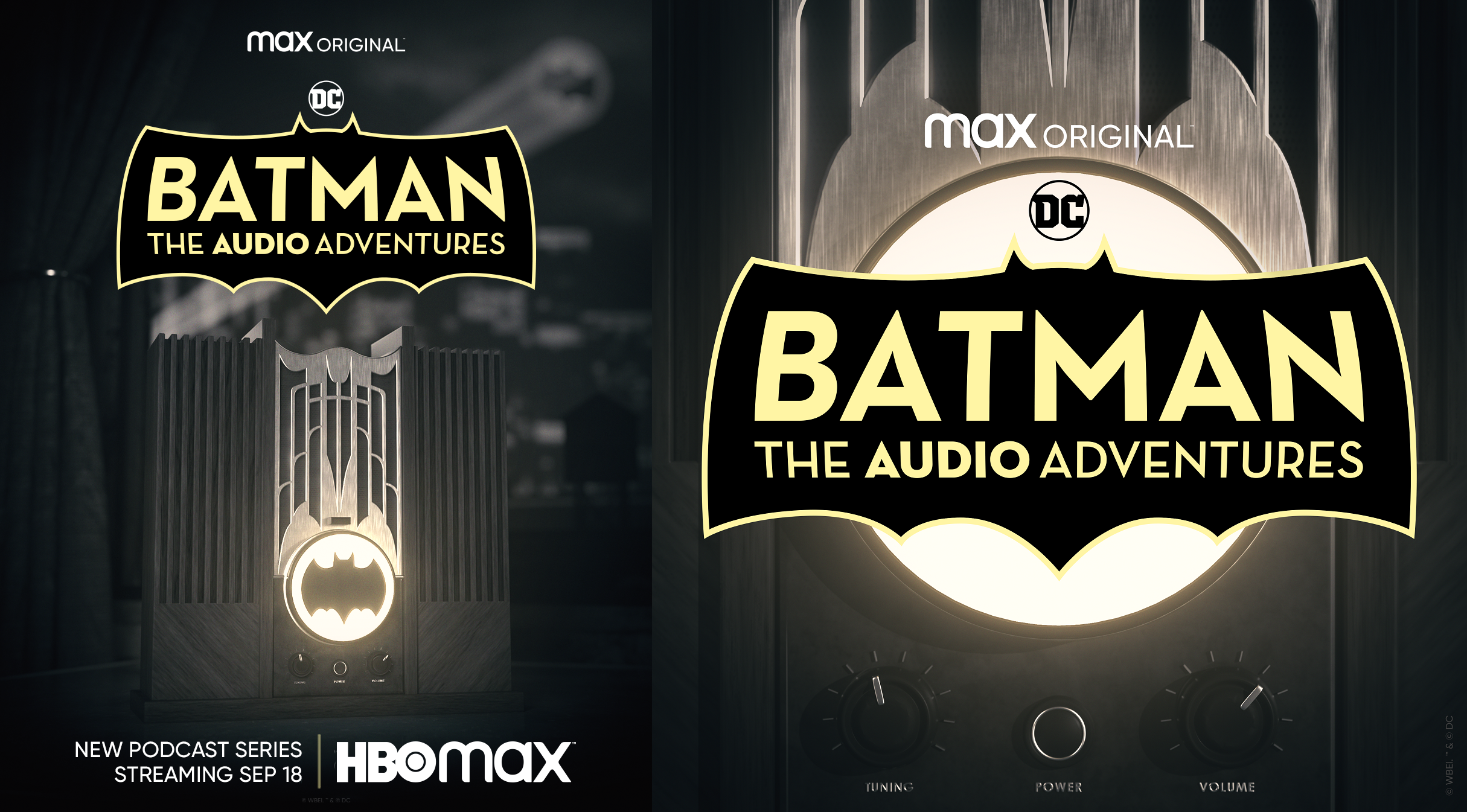 In the scripted audio original, produced in partnership with Warner Bros. and DC, Gotham City comes to lurid life in the theater of your mind with a sensational pageant of technicolor villainy unlike any other on Earth. Mafioso Penguins. Thieving Catwomen. Terrorizing Riddlers. Killing Jokers. A city where some problems can only be solved by a billionaire in a bat costume.

Fans should keep a lookout for a sneak peek trailer for BATMAN: THE AUDIO ADVENTURES, arriving soon!

To take listeners deeper into the mysteries featured in the podcast, DC will publish a special Batman: The Audio Adventures comic in October. The 80-page, prestige format one-shot features a prequel story by Dennis McNicholas, Bobby Moynihan, Heidi Gardner, Paul Scheer, and others; art by Leonardo Romero, Juni Ba, and others; and cover by Dave Johnson.

Headlining the anthology is a story from the award-winning duo of writer Brian Azzarello and artist Lee Bermejo (Batman: Damned, The Joker) in which Batman reflects on his time in Gotham, protecting his city and its inhabitants from all manner of threats.

Participating comic book retailers, digital platforms, bookstores, and DC Universe Infinite will feature a free Batman: The World “sampler,” featuring the complete lead story, “Global City” by Azzarello and Bermejo, plus previews of some of the stories from the international talent teams contributing to this landmark collectible hardcover. You can check out the official English-language trailer here. Fans can access exclusive BATMAN: THE WORLD products in the DC Shop starting September 9.

DC will release a special reprint of the hugely popular crossover release BATMAN/FORTNITE: ZERO POINT #1. The series was an immediate hit for fans of Batman as well as Fortnite and marked the first time that the world of the popular online game appeared in a DC comic.

FaZe Clan, the leading digital lifestyle and media platform rooted in gaming and youth culture will release a comic with DC on September 24—the first gaming organization to create a comic with DC! The limited-edition comic will feature popular FaZe Clan members like FaZe Banks, FaZe Apex, FaZe Temperrr, FaZeRain, FaZe Adapt, FaZe Rug, and FaZe Blaze in Super Hero form… and this is just the beginning: there’s even more FaZe Clan and Batman coming in Batman Month that fans won’t want to miss, including limited-edition Batman and FaZe Clan merchandise like esports jerseys, tees, hoodies and more, available on fazeclan.com, shop.dccomics.com, and NTWRK. Make sure to check out the BatmanDay.com hub, and follow @FaZeClan on Twitter and Instagram.

Across the Batman monthly comic books, the Scarecrow launches his campaign of terror in Gotham City, and it’s up to Batman and his allies to stop him in the can’t-miss publishing event BATMAN: FEAR STATE, launching in September, and continuing throughout the months of October and November across all Batman family titles. 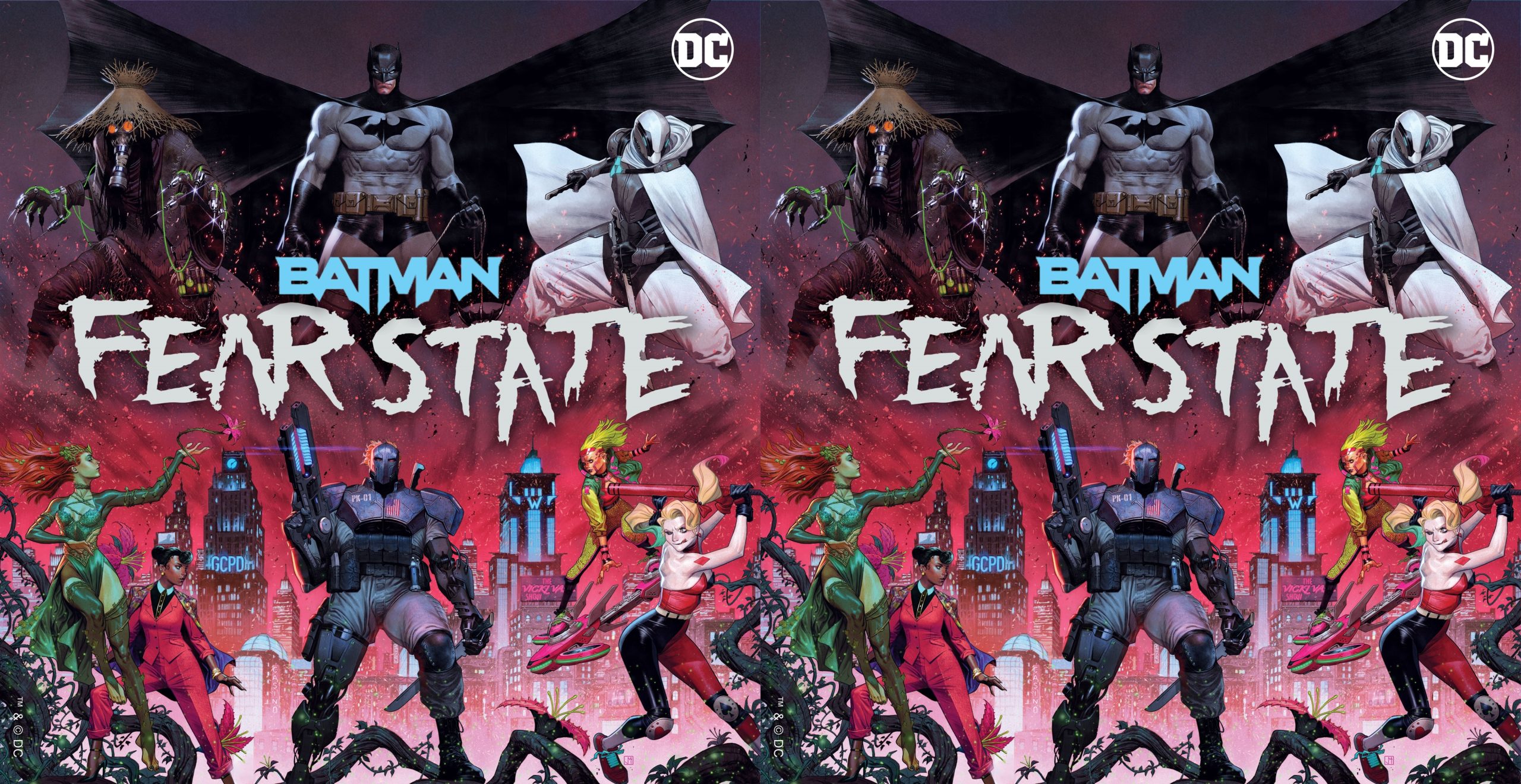 WEBTOON Entertainment Inc., the world’s number one webcomic platform, is releasing the first WEBTOON set in the DC Universe: Batman: Wayne Family Adventures. Batman needs a break, but with new vigilante Duke Thomas moving into Wayne Manor and an endless supply of adopted, fostered, and biological vigilante children to manage, Bruce Wayne is going to have his hands full. Being a father can’t be harder than being Batman, right? Fand can read the first episode here right now!

Marking the ultimate Batman augmented reality mobile experience, the DC: Batman Bat-Tech Edition app launched around the world in 13 languages, allowing kids to join Batman’s crime-fighting team, the Knightwatch. Through augmented reality (AR), kids can experience the world of Batman, learning how to use his Bat-Tech to fight crime and help defend Gotham City from his adversaries. Free to download and play on Apple and Google Play, the DC: Batman Bat-Tech Edition app immerses kids in narrative-driven, technology-inspired activities. Fans can get exclusive Batman content, AR filters, a digital comic book, and technology-based Batman learning experiences. On Batman Day, a new mission will drop, continuing the Bat-Tech app storyline. Players will be able to infiltrate Mr. Freeze’s lair and discover that a bank heist was a diabolical diversion just as the Bat-Tech App was being hacked by the Riddler. Can the Riddler actually use Batman’s technology against him to find the Batcave? Batman needs you and the entire Knightwatch team to help stop these Super-Villains.

Delivering an epic Bat-Tech toy line, leading global children’s entertainment company Spin Master fuses innovation with the world’s greatest Super Heroes and Super-Villains. Kids can immerse themselves in an adventure with the Batman® Bat-Tech Transforming Batcave Playset™ (Age: 4+; SRP $99.99). Standing at just under 3 feet tall, this epic Batman figure transforms to reveal a Batcave playset featuring 10 areas for action, an elevator that travels through the levels activating lights and sounds, and an exclusive figure and accessories. The Batman® All-Terrain RC Batmobile™ (Age 4+, SRP $54.99) takes missions to the next level, offering unstoppable all-terrain performance; grass, mud, snow, it even drives on water!

With the popular Super Hero at their fingertips, fans can stream, listen to, and download Batman on various platforms including:

A massive catalogue of Batman film and TV releases including platform originals like Titans and Harley Quinn and animated features based on some of the best-selling Batman comics such as Batman: Hush, Batman: The Dark Knight Returns, Batman: Death in the Family, and more are available for streaming now on HBO Max.

All month long, DC UNIVERSE INFINITE will feature collections highlighting the most essential and fan-favorite Batman storylines including classic Bat-tales like BATMAN: THE LONG HALLOWEEN, THE JOKER WAR, BATMAN: THREE JOKERS, and BATMAN: COURT OF OWLS. Additional Batman titles such as BATMAN: LAST KNIGHT ON EARTH #1, BATMAN: YEAR ONE, PARTS 1-4, BATMAN: UNDER THE RED HOOD, and more will be available to read for free for all registered users.

dccomics.com will have news and features highlighting your favorite Bat-Family characters and featuring deep dives into Batman’s history, gadgets, and greatest battles

BATMAN AROUND THE WORLD

All-new global experiences inspired by the world of DC Super Heroes and Super-Villains including a unique immersive Batman-themed experience to premiere in London in 2022 in partnership with Department Studios, Inc. and Myriad Entertainment. Fans in the U.K. can also enter to win a complimentary meal for 4 at Park Row – the brand-new premium DC immersive restaurant in London – and tune into Cartoon Network to win the ultimate Batman toy bundle from Smyths. 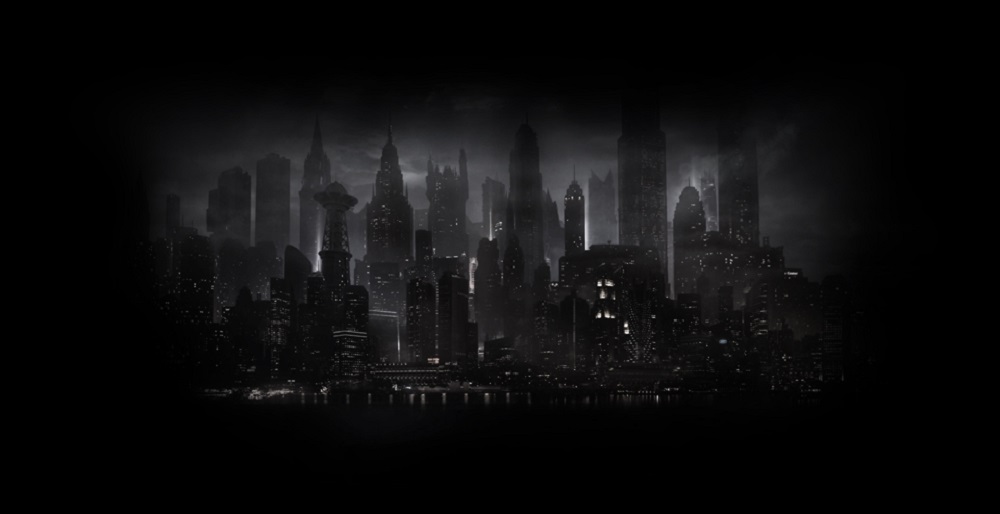 Batman will be celebrated all month in France with unique Batmobile experiences for fans with the Batmobile in the biggest toy shop in Paris, Village Jouéclub Paris: includes chances to sit in the Batmobile, signing sessions at Le Louvre with a live fresco reproduction of the cover from BATMAN: THE WORLD and more.

In Italy, the Dark Knight will personally deliver amazon.it packages to lucky recipients on Batman Day.

In Spain, Amazon Alexa devices will recite famous lines from the Caped Crusader such as “I’m Batman” and “Gotham City needs me” on Batman Day 2021.

German fans can save on digital home entertainment releases of top Batman titles on Amazon, Apple, Google, and other participating video stores.

In Japan, THE ART OF DC – THE DAWN OF SUPERHEROES exhibition will launch in Fukuoka City on Batman Day. It will be cross-promoted with Kodansha, DC’s publishing partner on the original manga production Batman: Justice Buster – available now at all book retailers in this market!

Cartoon Network will celebrate the Dark Knight with an action-packed lineup of Batman-themed programming. The festivities will kick off at 9 a.m. ET/PT on September 18 with an all-new Teen Titans Go! episode, “Batman’s Birthday Gift,” which follows the Titans as they try to deliver a birthday gift to Batman but face detours several times along the way. 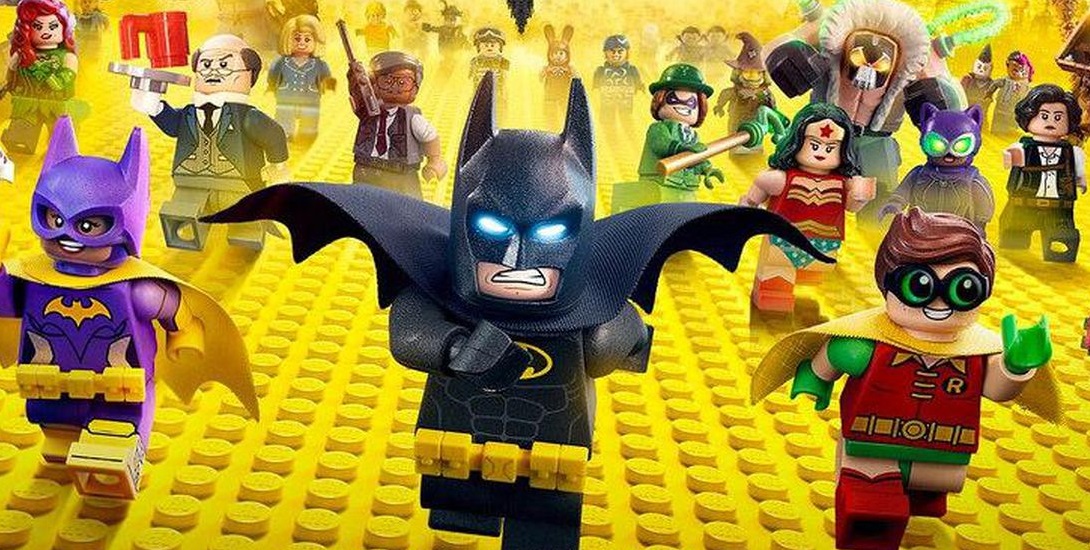 Kids and families can tune back in later in the day at 6 p.m. ET/PT for a showing of Warner Bros. Pictures’ smash-hit film, The Lego Batman Movie. Fans can also check out the Cartoon Network app throughout the day for “Best of Batman” groupings featuring more Batman-centric episodes of Teen Titans Go!, DC Super Hero Girls, Justice League Action, and more.