Park Row, the worlds first DC Comics immersive restaurant is coming to London.  The Warner Bros. movie studio has revealed that the restaurant will be opening in London, Spring of this year. The restaurant will be called ‘Park Row‘ as a tribute to the area of Gotham City where Bruce Wayne’s parents lost their lives.

The venue is 18,000 square feet and will sit inside of an Art-Deco building on Brewer Street. The experience diners are likely to receive will be more akin to a dinner show, rather than the usual trip to a restaurant. You’ll enter the venue and then move to an area similar to the Batcave. From there you then have the choice of three bars and five, yes five, different restaurant experiences.

Named after Bruce Wayne’s butler, Pennyworth’s will offer a study like atmosphere.  Here you can expect, unsurprisingly, traditional British dishes to be served. In Old Gotham City you’ll be served villainous cocktails. Then there’s an area themed on Harley Quinn, where sushi is on offer.

The largest of the restaurants will be called the ‘Iceberg Lounge’, obviously a tribute to Penguin, where you will find an international menu. That’s not all, as the Lounge will also offer live entertainment. Check out the concept art below; in keeping with the art-deco style of the building itself, the detail is wonderful.  With a penguin ice sculpture in the middle of a circular bar, there are also miniature models of umbrellas, which hide lights on the middle of the marble tables. Exceptional. 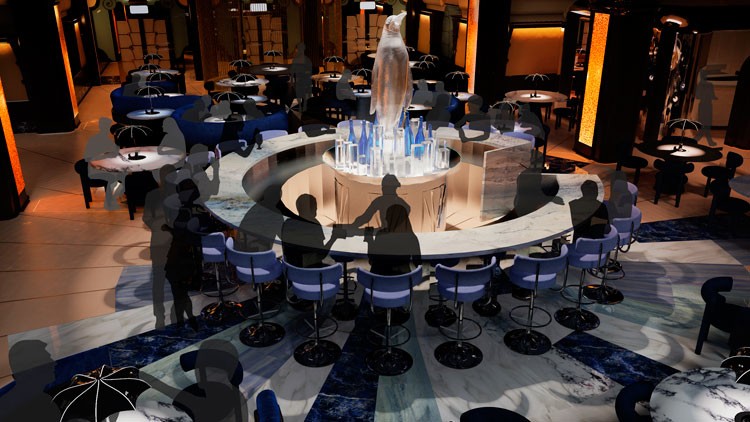 Warner Bros Consumer Products, DC and Wonderland Restaurants have all come together to form a partnership for the restaurant. Success is highly likely, considering Wonderland Restaurants founder James Bulmer’s success; senior roles at Disney and three Michelin-starred restaurant The Fat Duck are testament to that.  Furthermore Mr Bulmer has the help of his father, Derek, who edited the Michelin Guide to Great Britain. This is a huge indicator as to how the food will be of excellent quality; the kitchen will also be run by Cláudio Cardoso, the chief exceutive of the very, very successful restaurant group, Sushisamba.  It’s been said that the food on offer will be surreal enough that it fits within the world of The Batman.  Park Row’s innovation director Mark Garston is another who has had success thanks to Fat Duck.

Wonderland Restaurants have also employed Chris Cox, a magician. Chris worked on the Harry Potter and the Cursed Child stage show, also run by Warner Bros.  The quality of those involved in this venture is quite incredible; second to none.

Thanks to the soaring popularity of the DC movies, Park Row is the latest step in making Warner Bros. “a force in themed entertainment”.  With London being the logical location for the restaurant (although I’d love to see something up North), this is surely a massive success in the making.

Trends in our sector are moving towards fun, immersive and experiential dining and our aim is to demonstrate this on a grand scale with exceptional food and drink to match.  I am still a child at heart, inspired by the greatest stories and storytellers. For me, great food experiences are about unlocking guests’ emotions and creating edible memories.

I ask you all dear readers, are you excited for this? I know I am, as I have followed it’s progress since the submission of the planning application, early last year. I’m certainly looking forward to visiting the restaurant at some pint myself.

Let us know your thoughts in the comments section below.