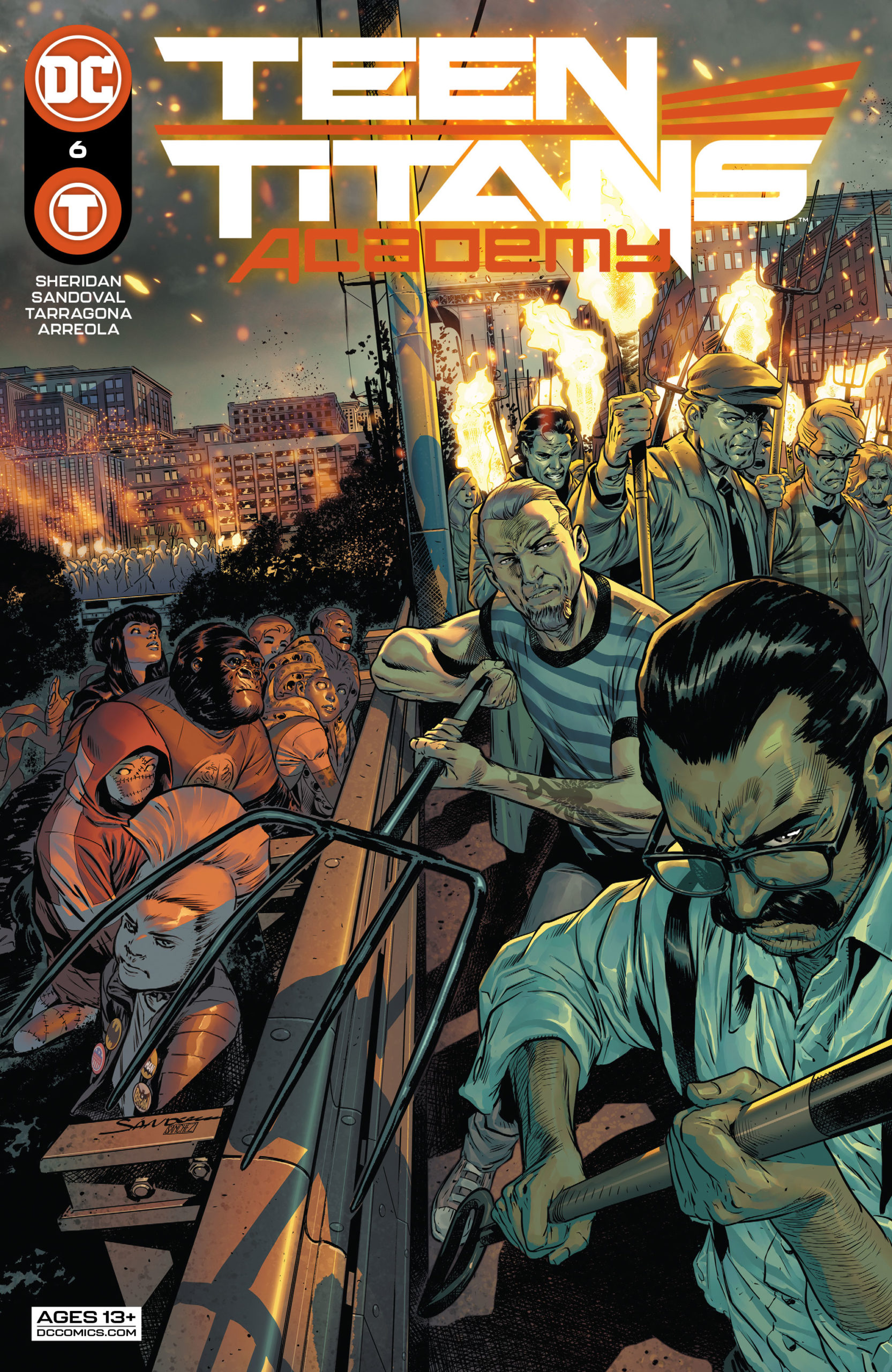 After last month’s stellar issue (and let’s be honest, this series’ entire run thus far), it was going to be hard to top. While you can’t better a 10 out of 10 score, Tim Sheridan and company certainly tried. This book has proven it’s not afraid to tackle school tropes, and Teen Titans Academy #6 tackles another school trope, summer break. To what degree of success?

The latest issue moves the series back to a team setting, though only focuses on the students vs. the three generations of Titans. I loved Sheridan working with the three generations, but I’m loving these smaller focused stories more. While this issue doesn’t offer as deep of a look to these characters as last month’s offering did, we still get to know a small group of these kids more. What better bonding experience than taking a summer vacation together?

The main spotlights this time fall on Gregg, Chupacabra, Tress, Stitch, and Summer; with a particular focus on Gregg and Summer. Gregg, nephew of Grodd, and Summer spend time bonding, which gives us some insight into both characters. It’s very cute seeing their friendship blossom, which makes the ending of Teen Titans Academy #6 even more devasting.

What brings these five heroes together is the oddness of everyone missing. The beach pond is empty and Gregg/Summer wonder why. That leads them, accompanied by Chupacabra, Tress, and Stitch, to head into town. Things there are even stranger, as the town itself looks empty. There’s a mystery to be solved. Cue the gang. 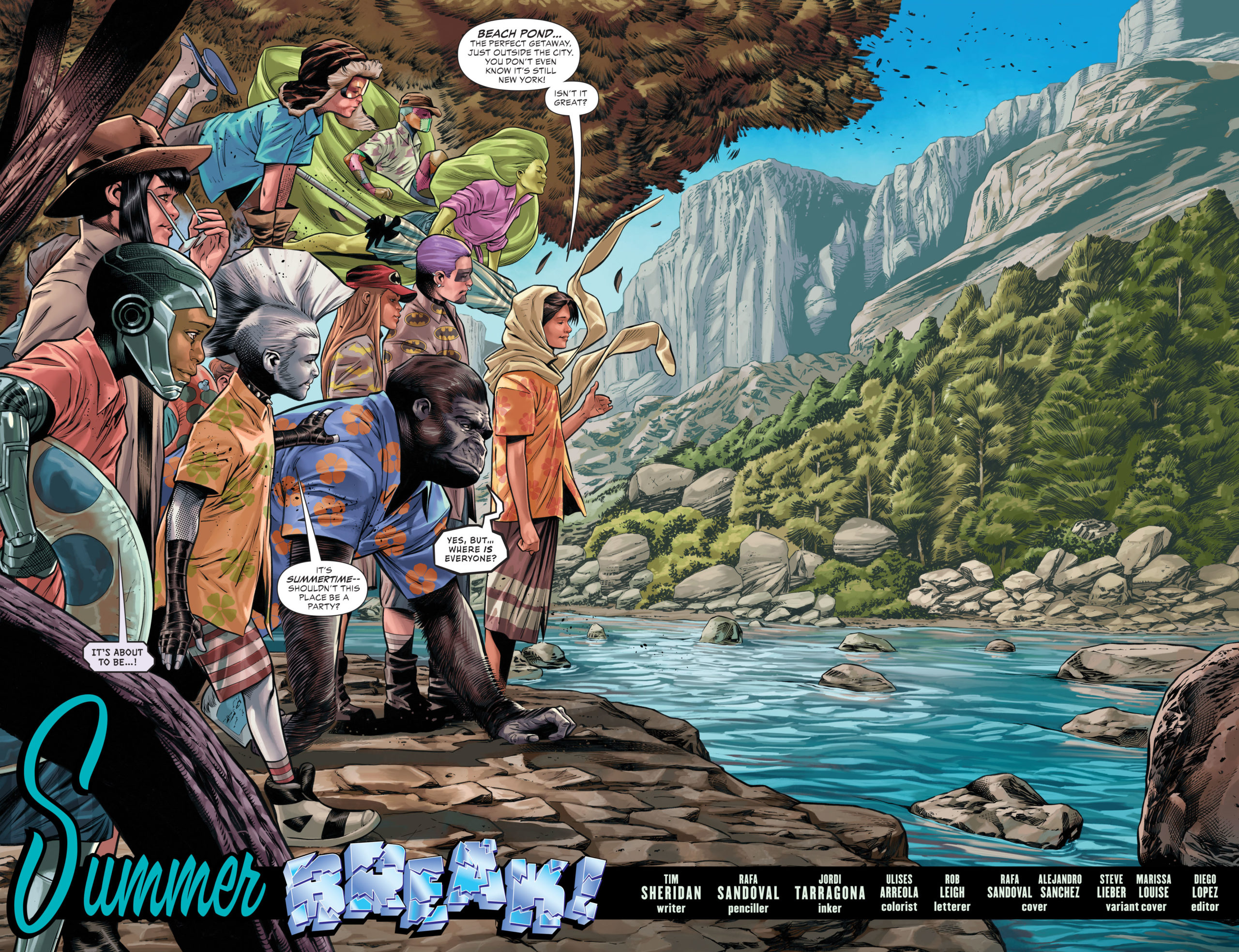 Stitch, who’s rapidly becoming one of my favorite DC characters, transforms the team into Mystery, Inc. and I feel like Sheridan did this specifically for me. I’m here for all the Scooby-Doo nonsense in my Teen Titans stories.

This main story thread leads to the disappearance of Gregg, which becomes the crux of the issue’s narrative. While the rest of the team split up to follow the strange townspeople, with hopes of finding their Gorilla friend, the B story screams for your attention. There seems to be some mutual attraction between Stitch and Chupacabra that is hinted out throughout the issue.

Tim Sheridan knocks it out of the park with this issue. Maybe I’m an easy mark, but I love the silly jokes he incorporates into Teen Titans Academy #6 and the series as a whole. I’ve seen some criticism about the way he approaches these books and I think something we reviewers have to remember is the core audience, kids. Writing for children doesn’t excuse bad writing or storytelling, we have to factor it into the style of writing. Sheridan is delivering really good stuff here and telling a great story, which is so hard to do with team books (let alone a series that ultimately features 3 generations of teams). Again, maybe I’m a mark, but I don’t think Sheridan is playing strictly to kids here. He knows his audience and he’s got something for every one of us. I said it last month and I’ll say it again, Sheridan could easily take this comic, pitch it for The CW and it would work.

Rafa Sandoval matches Sheridan’s vibe with his art. It’s got that modern comic feel that I love and is enhanced by Jordi Tarragona’s inks. Their subtle, but used to great effect. Though the real art hero of Teen Titans Academy #6 is Ulises Arreola. His colors make this whole issue pop. There’s a level of detail that makes everything from the characters to the rocks seem real.

Teen Titans Academy #6 tackles another school trope with Summer Break, but this creative team knows how to handle the generic and put their own spin on it. There’s so much to love in this issue – from the writing and art to the silly jokes and homages; it’s probably the most fun I’ve had reading a comic in years.