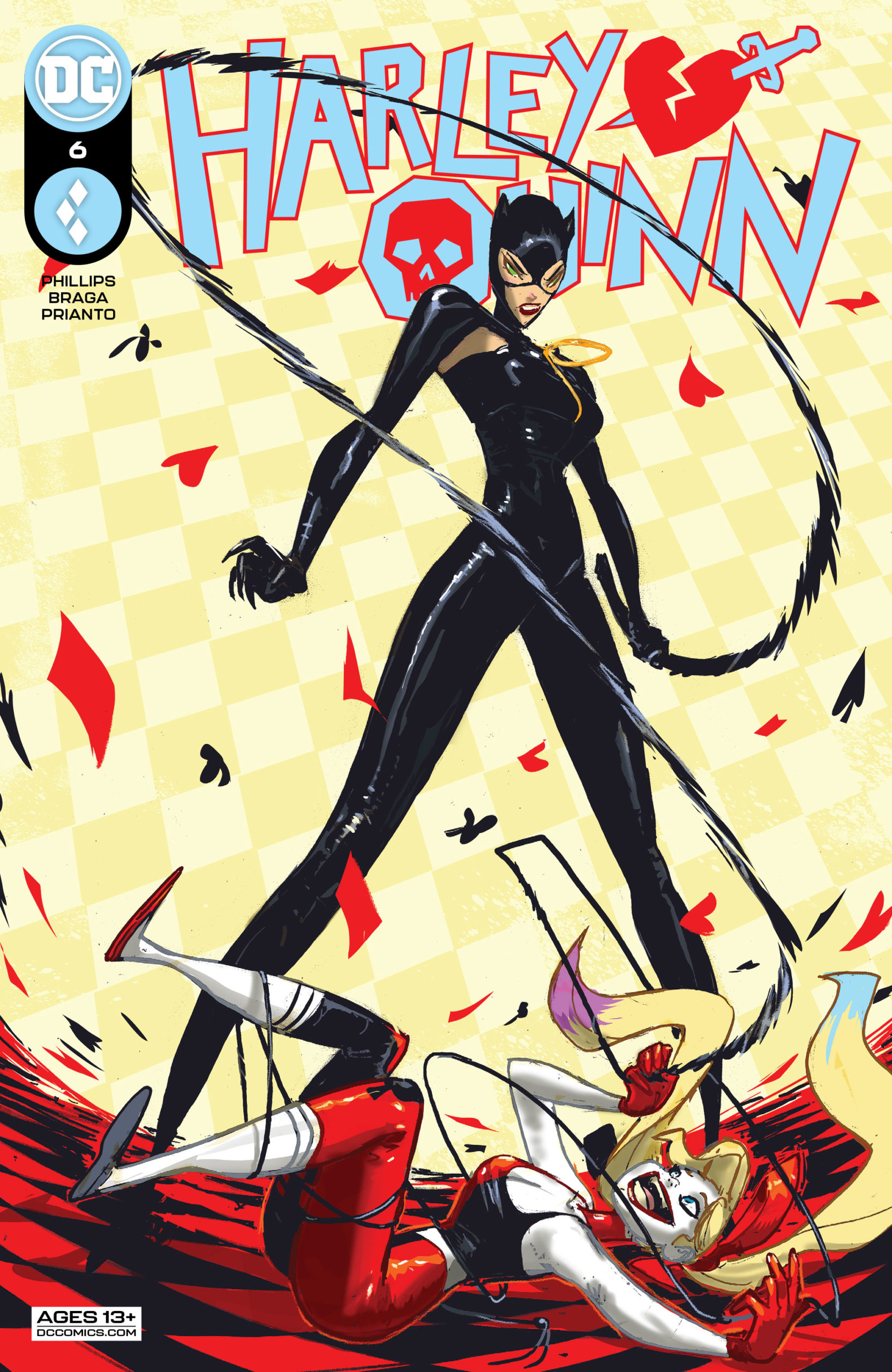 Harley Quinn has officially fallen down the rabbit hole, but how far down she goes will be a fun experience. Harley Quinn #6 is here and it promises a bevy of twists and turns for the future. Also, many answers and hints of what is building are given to us in this issue, as Harley has Hugo’s attention, although what she wants is his end. With that thought in mind, she makes her way to a part of town that’s under the protection of a familiar face.

Walk Down The Right Back Alley In Gotham City, And You Can Find Anything

In fact, this is exactly what Harley’s hoping for. She’s on the hunt for the drug runners bringing in the narcotics that Hugo’s using to harm those who he is “rehabilitating”. Running into a patch of trouble, Catwoman steps in and saves her butt, leading to a tentative partnership in order to stop Strange’s schemes. Meanwhile, Hugo’s gears are turning as both he, and the new villain, Keepsake, attempt to keep their plans moving forward. The thing is, they’re not the only ones moving the pieces on the chessboard, as a familiar evil steps forward harboring plans of their own.

Harley and Catwoman have only scratched the surface of what’s happening, and there are a lot of big names putting their hats in the ring. Many questions are left unanswered, but it’s clear that what’s coming for Harley and for Gotham will be groundbreaking.

Harley Quinn #6 has a different look as Artist Laura Braga and Colorist Arif Prianto step to the plate for this delicious issue. The writing is foreboding and is just a tantalizing taster of just how much is still to come in the future of the series. The artwork’s completely sublime as the faces are a joy to look at There’s one scene where Harley’s more than happy to defend her unannounced crown as Queen of Distractions. The art reminds me of a character from Avatar: The Last Airbender named Ty Lee, as Harley gracefully falls through the window like an acrobat.

Another really cool thing about this issue is that we get not only a sneak peek into how what’s happening in the Harley Quinn series doesn’t just affect her part of the DCU, but that there’s a plan that will ripple throughout many more, and will affect everyone. The build-up is for Fear State and in with this issue readers also get a checklist for all of the chapters and different titles that will feel these ripple effects. It seems from the interview in the back of the book that fans of Harley Quinn will have a lot on their plates, as it looks like she’ll be playing a major role in the event. I’m looking forward to seeing it unfurl and connect to the series from earlier this year, Future State.

Harley may be biting off more than she can chew, but watching her handle everything will be a thrill. I have a feeling that we may be seeing a new facet of Harley that will continue to break through as this journey takes its course. That can be said of anyone who will be joining in on this Fear State ride as it’s one that may change… everything.