Batman may be leaving Gotham City, but his story will continue 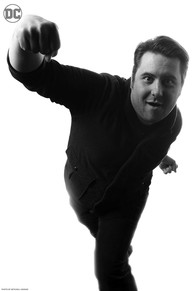 Batman, and his current writer‘s, days are numbered in Gotham. James Tynion IV recently announced that he would be leaving his non-creator-owned titles behind.

Tynion has been the voice of Batman for quite some time, so his shoes are awfully large to fill. Luckily for us, DC Comics tapped the next logical person to take the reigns of Batman—Joshua Williamson.

Williamson took to Twitter to make the announcement, where he also revealed Jorge Molina will joining him on art duties:

Not talking about this was driving me nuts. Excited to finally share @jorge_molinam’s #118 cover with you! The oval is back! pic.twitter.com/ahalzGs9vZ

The Tweet, revealing that Williamson and Molina will take over with issue #118 in December, shows off the cover and confirms Batman won’t be in Gotham at the start of their run. The Dark Knight’s suit has also been updated to include the yellow oval once again. Honoring the storyline they’re inheriting, the new Batman writer also gave fans a peek at the cover for issue #119:

Joshua Williamson and Jorge Molina look to be doing some interesting things with Batman, starting with the debut of a brand new villain—Abyss!

Williamson has spent a lot of time in Central City with The Flash, but is no stranger to The Dark Knight. He’s worked on Batman/Superman, Justice League, and Dark Knights Metal to name a few. Molina’s work with DC Comics has mainly been spent as the colorist on Birds of Prey, but if his cover work on the first two issues of their Batman run is any indication, the series is in great hands.

Joker Baby Doll Based on Joaquin Phoenix is… Interesting