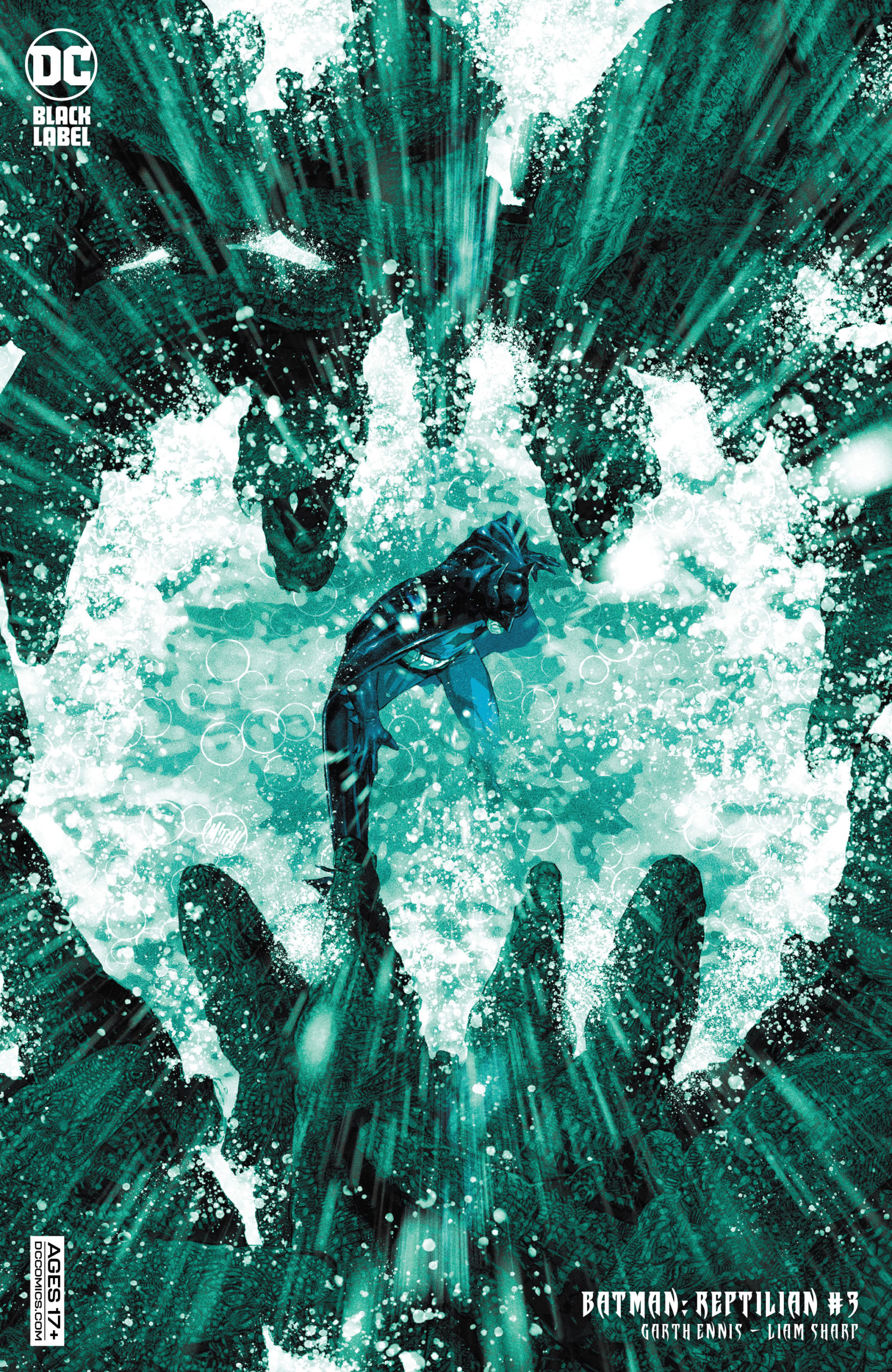 Showing us a lot more blue than in the previous issues, Liam Sharp’s Batman: Reptilian #3 has arrived. Now that we’re halfway through the series, we’re getting closer to finding out just what it is that’s quickly tearing through Gotham’s villains like tissue paper. You know the situation’s bad when The Joker’s nervous, and he’s nervous right now.

I could talk about Sharps fantastic artwork all day, and if you’ve been keeping up to date with my reviews you may be tired of me praising it so much too. So for this issue, I’ll skip over it, but I can’t promise to do the same in the next one.

No One Left To Play With

With Alfred being helpful and unhelpful at the same time, as usual, and with Batmans usual list of suspects steadily getting shorter and shorter, the good guys are running out of time to solve this mystery. Having less villains to question wouldn’t be a problem, if they weren’t hiding from the thing hunting them down and ripping them apart, which is understandable. They may be crazy enough to commit crimes and get thoroughly broken by Gotham’s protector, but they aren’t crazy enough to openly accept mauling and death.

We get to see poor Konstantin Volkov again, looking as scared as expected to be part of the laughing boys, and getting text messages from the caped crusader certainly doesn’t help calm him down. He actually seems to text as bluntly and grouchily as he speaks. Poison Ivy probably wouldn’t have been too happy with Joker’s gang hiding in her botanical gardens if she’d been around either.

So far, the only thing Batman has that gives him the slightest idea of what it is that’s hunting down his villains, is something in everyone’s blood from the last issue. a hormone that comes from a reptile. This leads to the important question: what exactly is Killer Croc? A human shaped lizard, or a lizard skinned human? Maybe finding out the answer to that will help Batman uncover just what’s hunting in his city.

Convinced that Batman’s the one that created the thing taking out Gotham’s finest, The Joker decides to throw his own spanner in the works, since Batsy clearly isn’t busy enough. Of course, because of the chaos, Mr J’s smiling. He does have a lovely set of teeth though, maybe the whitest any version of the Joker has ever had. It’s no wonder he wants to show them off all the time. As unhinged as ever in his fear of ‘Batman’s monster’, the Clown Prince of crime’s interference slows down the investigation a little, but Batman’s last words before walking away was very ‘mic-drop’ moment.

So how do you like my sense of humour?

Batman: Reptilian #3 is just as dark and gruesome as the first two issues of the series. Liam Sharp’s painting Gotham in a different light each issue, quite literally. It’s something lots of people may overlook and not think about, but I’ve noticed that the color in each chapter’s a big indicator of what the issue is about. This is brilliant. The writer, Garth Ennis, is also very consistent with each character’s personality, and their different types of humor and wit.

Batman: Reptilian #3’s the halfway point of this series, with only three more issues left and Batman steadily getting closer to figuring out what’s happening in Gotham, I feel like we’ll be in for one heck of a ride soon. We have one more person left on the Dark Knight’s list of suspects, so maybe the hunter won’t be far behind. I’m looking forward to seeing what will happen in #4.

Come back next month to find out how well finding Killer Croc goes!