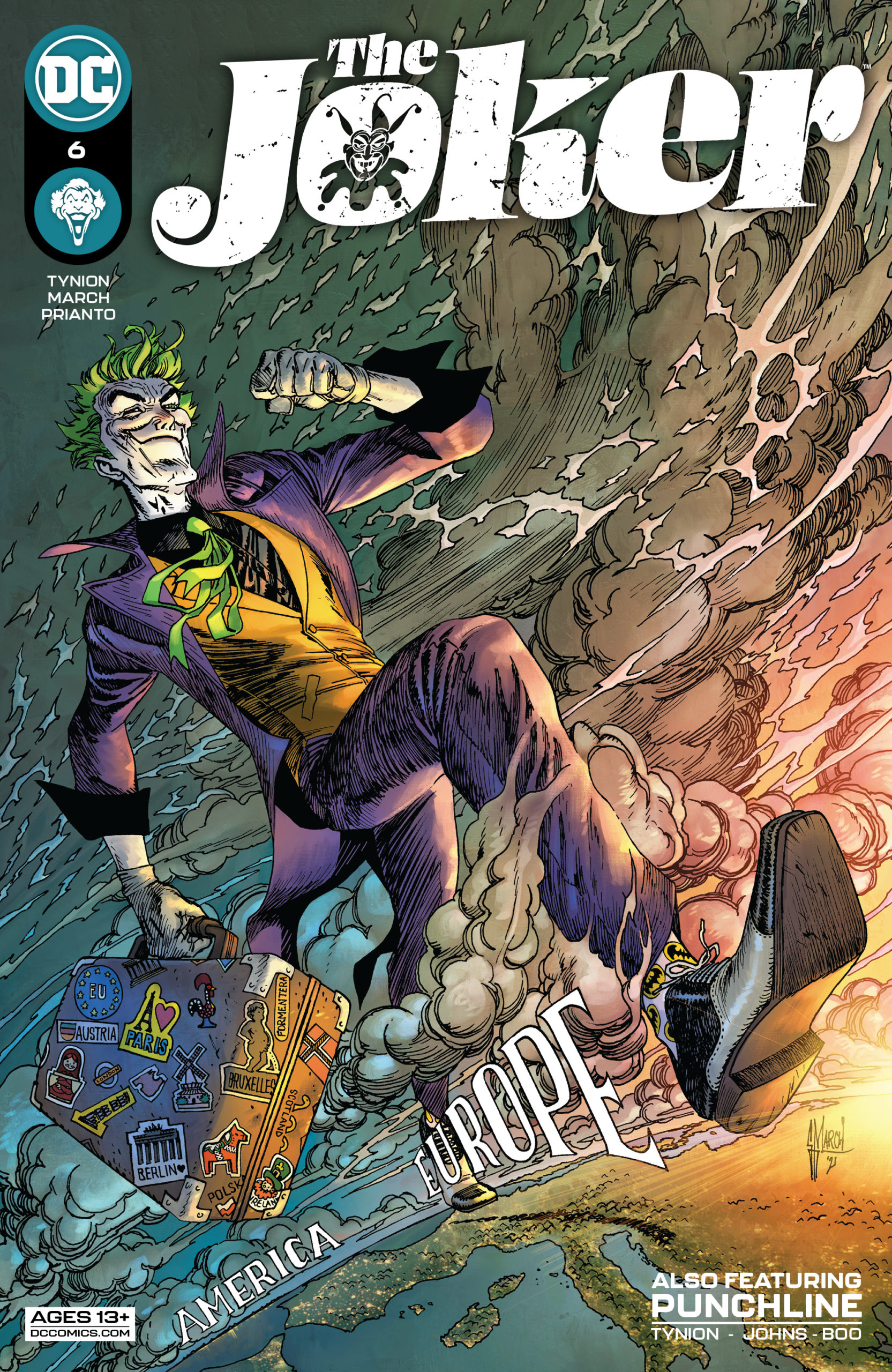 After last month’s flashback issue, we’re right back on track with The Joker #6! The Clown Prince of Crime has fled to Europe and Jim Gordon’s on his trail. What of The Sampson family, though? Vengeance? The spooky Court of Owls? Even as Gordon pursues The Joker, there are seeds of doubt, and they’ve begun to sprout. Did The Joker actually gas Arkham Asylum? There’re a lot of loose ends, and after James Tynion IV’s recent announcement about stepping away from Batman and The Joker in the near future, there’s a lot to tie up. However, if anyone can do it, it’s Tynion.

Okay, we don’t instantly get back on track. The Joker #6 opens fifty years ago in Hooper County, Texas. We get a quick flashback about The Sampsons, and are given been the biggest question mark in the series thus far. As much as I wasn’t a fan of the flashback last issue, it works really well here. First and foremost, those panels just felt like a great horror movie; I was hooked from the start. More importantly, we now know the true nature of the family’s involvement with Arkham Asylum. Thanks to this, I have a much better understanding as to why they’re after the Clown Prince of Crime.

Back in the present, Jim Gordon’s on the case. Having followed The Joker’s trail from Belize to Europe, Gordon finds himself in Paris. This is where things get hot and cold for me. I’m starting to get tired of Jim’s internal monologuing. I truly get why Tynion includes it – the book wouldn’t feel like a noir story without it – but it’s the constant reminder that Gordon thinks of himself as a terrible husband and father. It’s just too much in my opinion. However, I’m loving the other aspect of a good noir: the investigation.

The Joker #6 finally has Gordon’s eyes on all the players, not just Joker. I’m most excited about his investigation into The Sampsons, as they feel the most interesting characters after Mistah J himself. It feels like we could get a lot of stories about this cannibalistic family in months and years to come, and I’m here for every horrific moment of it.

I also have a theory about The Joker: he’s innocent (at least of the horrific recent events at Arkham Asylum).

I believe what he said a couple of issues ago – gasing Arkham Asylum, in the fashion it was done, was not his style. It also seems pretty clear he’s a couple of steps ahead of everyone. He was prepared in Belize. Heck, he may have even known that Gordon would be (unknowingly) working on behalf of the Court. While that part of it is unclear, he knows Gordon ‘s chasing him now. Spoilers for the final pages of The Joker #6, but I don’t think the clown is trying to set up Gordon for murder. I mean, he did do that, but I think it’s a clue he’s giving Gordon to help prove his own innocence.

On that note, it shows Tynion’s brilliance as a writer. Even if my theory is wrong, the writer’s playing the long game. By the end of his run on The Joker, I’m sure I’ll look back at these issues with a new set of eyes and find all the brilliance I missed. While I’m getting tired of the “Gordon thinks he’s a terrible husband and father” narrative, the story itself is making me excited for what’s to come.

Guillem March returns for The Joker #6 and it’s more of the same for me. I’m starting to get used to the characters we’ve seen in every issue, except for the titular character, as he still feels  a little off to me. It’s when March works on new personalities, like Bullock, that I recognize my issues with his art. That said, the opening pages of The Sampson family flashback are the best of this series so far. March also does some cute work with some panels and a mime in the opening pages of Gordon’s story.

The backup story in The Joker #6 also delivers more of the same. It’s better than last month’s for sure, but we’ve gone from Harper Row – aka Bluebird – pulling out some Batman-like moves, to Harper Row failing to fool Punchline in a short amount of time. It’s clear that Punchy recognized Harper, even before the latter sat with the former. All that makes Harper look bad. Heroes do make mistakes, it’s part of what makes them a hero; even Batman, but this whole sequence just seems bad.

I’m a rule-of-three person, so the jury’s still officially out on Sweeney Boo taking over the art on these backup stories. That said, I’m loving it. It seems to fit what Tynion and Sam Johns are trying to do in main strip, and I truly love the color schemes Boo uses. I’m hoping the story catches up to how much I’ve been loving this art soon.

The Joker #6 returns as a solid issue after last month’s filler. Despite the continued inner monologue of Jim Gordon, there’s a lot of forward progress happening in the main story. As for the backup, Punchline needs something – maybe more pages, moving in a different direction, anything really – to be an interesting story. However, Boo’s art alone continues to make the backup strip worth your time.