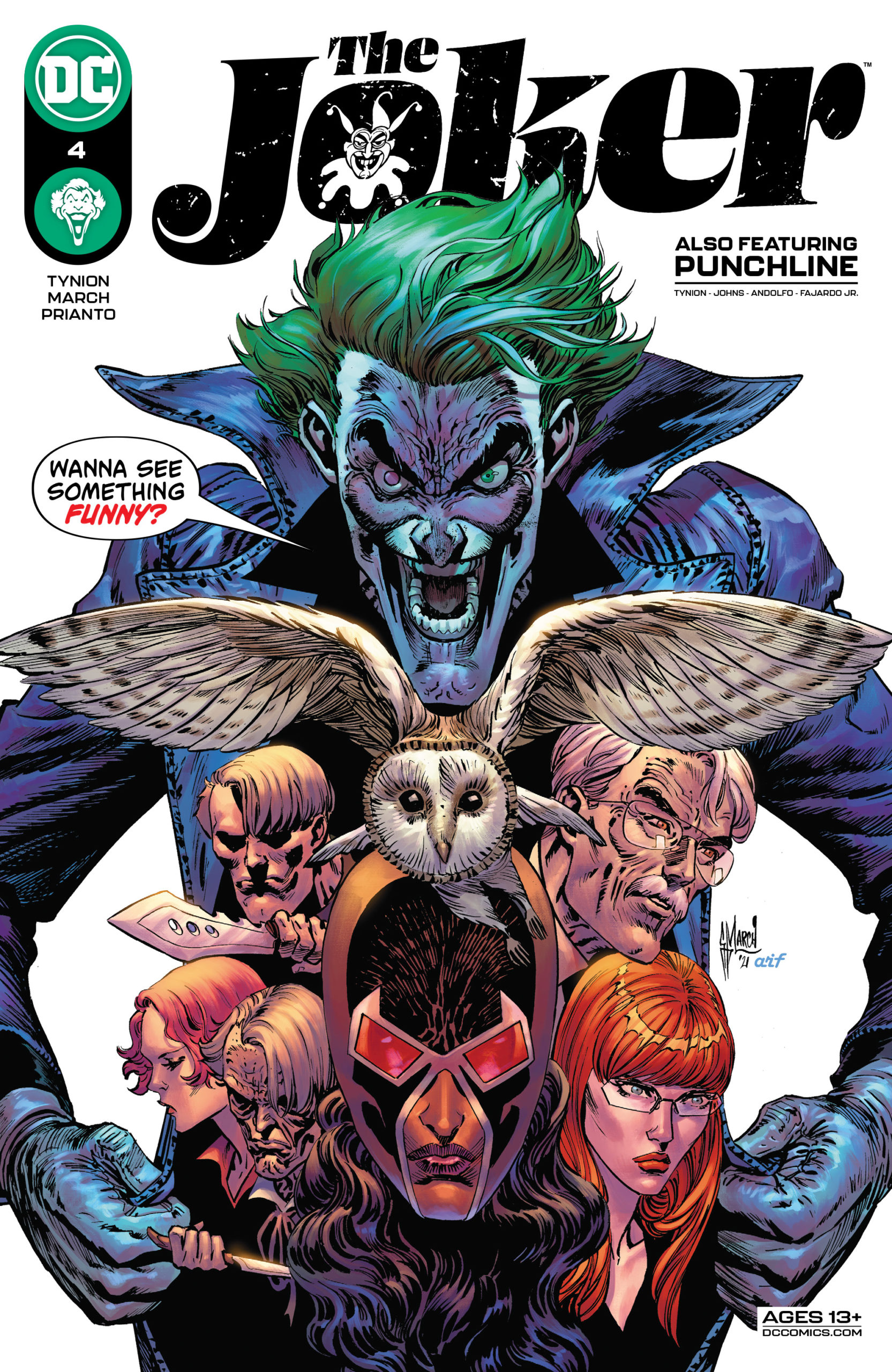 James Tynion, Guillem March, Sam Johns, and Mirka Andolfo just kicked it up a notch with The Joker #4. Everyone is after the Clown Prince of Crime and Jim Gordon is stuck in the middle of it all. Meanwhile, the backup story with Punchline and the Royal Flush Gang suddenly becomes interesting again. This issue is jam-packed with action and intrigue and it pushes the story forward.

The End of the Tunnel

The Joker #4 picks up where last month left off, with a war coming to Joker. We continue with Gordon’s noir inner-monologue, though it’s less exposition and more mood this time around. If you’re not a fan of word-heavy comics like I am, this could be a problem for you; though I’d argue that by the mid-point of this issue, you may genuinely worry about the former commissioner’s mental well-being. The good news for those that aren’t a fan of this noir style of writing, there’s plenty of action underneath it all. She-Bane is the highlight of the issue, using the environment to her advantage in fun and inventive ways.

Gordon has an interesting line near the end of the main story:

It really hammers home how depressed he must be, but I also call BS. Has Gordon made mistakes? Certainly, but who hasn’t? Earlier in the book, he had the perfect opportunity to take the Joker out, and he didn’t. If Gordon hesitates to take down the man who shot his daughter and tortured him, there’s got to be a reason. In my opinion at least, this is because Jim Gordon is inherently good.

The B-story follows Barbara and the Batgirls, Stephanie and Cassandra; trying to get more information on who Cressida, the woman who hired Jim Gordon to kill the Joker, is. They get little to no information, though Barbara suspects that Cressida knows she’s being watched. This portion of the story ends with a looming intensity.

By now, I think it’s obvious that I’m an overall fan of what this creative team is doing with The Joker. James Tynion continues to bring that noir feel to the book and is writing some compelling stuff. I’d say The Joker #4 may be the most compelling thus far in the series. He has me worried for Gordon’s mental well-being, which I hope gets explored more in a future issues. The back and forth between Jim and the Joker is Shakespearean. For those that feel like the series has been monologue-heavy, Tynion does move away from that halfway through the book; though I suspect that was to serve this specific part of the story.

While I’ve had small issues with Guillem March’s work on this series, he crushes The Joker #4. Almost none of my previous qualms are present in this issue, and any that remain service the story. His take on the Joker and Arif Prianto’s colors during the nerve gas scene makes for an incredible, if not slightly trippy, scene.

Punchline has finally caught my attention. I’m not sure if it has it all as yet, but I’m back on board. Chapter 4 didn’t return to that procedural feel of the first chapter, but the story does enough heavy lifting to not need it this time around. While the story with Punchline and the Royal Flush Gang took an interesting turn this month, I’ve always been more interested in Harper Row and Leslie Thompkins’ story. Harper found herself in a pretty big dilemma last month, but has her own Batman moment to get to safety. I’m hoping the twist this story has taken leads to more interesting beats going forward (I’m begging Tynion and Sam Johns to give me that Bluebird/Thompkins procedural!)

Tynion and Johns deliver their best work on this backup story since Chapter 1. I’m invested in the twist ending and excited to see Bluebird have her moment. I’m hoping now that the action is picking up at Blackgate, they get Bluebird and Thompkins back together for that Law & Order: Gotham feel again.

Again, it’s likely clear that Mirka Andolfo’s art works for me. With this issue, in particular, she had me feeling Bluebird’s pain as she was dealing with flames and random objects falling on her. Romulo Fajardo Jr. continues to color this backup story perfectly. By contrasting the main story in The Joker #4 in tone, he compliments it for a better overall book.

The Joker #4 is easily the best in the series so far. I have few complaints as Tynion seems to have found a perfect balance of noir and action. March absolutely crushed this issue and the creative team for Punchline is moving in a positive direction.