In my recent review of Zack Snyder’s Justice League, I mentioned that, for the most part, I never really felt the lengthy four-hour runtime. Aside from not being able to watch the movie in one sitting, the only other time I felt its unwieldy runtime was when I was looking for scenes from the trailer. One scene in particular that never made it into the movie was Joker’s “We live in a society” line. While I personally never understood the meme, its presence in the trailer melted the Internet. Netizens were understandably disappointed when the line didn’t appear in the film itself, but Snyder is nothing if not accommodating. On Friday, the director took to Twitter to share the full scene with the famed Internet meme.

Let’s not bury the lead. Take a look at the entire scene below:

Comparing the scene from ZSJL and the deleted scene, it seems that following Batfleck’s frightening threat, the original conversation played out longer. In the version that we got, Joker seems taken aback by Batfleck and looks away to concede defeat in this exchange. The scene ends with Joker turning toward Batman with this maniacal open-mouth grin and laughing. In the deleted scene, Joker fires back with the “We live in the society” line and follows with yet another taunt,

By the way, who do you think screamed the loudest? The girl or the boy?

This is when the scene appropriately ends with his laugh.

Aside from the fact that it’s fairly unsettling and wonderfully performed by Jared Leto, it raises one big question: Who is the girl? We’ve seen plenty of Easter eggs and heard Snyder mention Robin multiple times, but we’ve never heard of a girl. Could it possibly be Batgirl? 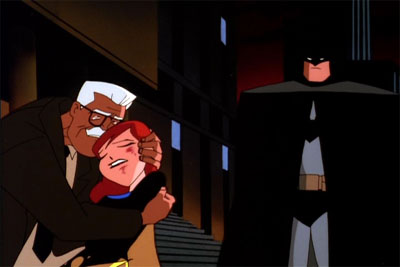 Since the #SnyderCut was already one big hulking movie, it does make sense why he’d want to cut this clip. It’s just a minute with even more setup for a universe we’re never going to see. As I said in my review, one of the flick’s biggest flaws was all the roots he was laying down for a sequel that he knew wasn’t coming. In this situation, however, I believe the line probably should have stayed in. It gives us much more chilling dialogue from Leto’s Joker, really emphasizing how sadistic he is. I mean, it’s only a minute. We’ve already committed to about 230 minutes up until that point. Or maybe, Snyder just decided to abandon this canon involving the girl altogether.

Check out the Joker scene from the ZSJL below to compare for yourself:

Snyder has gone on record to explain that he meant to use it for his “Justice is Gray” edition of ZSJL, but ultimately, it was still cut from that version as well. He opted instead for a more “broken” and “vulnerable” Joker who seemed genuinely impacted by Harley’s death and her last wish.

What do you think? Do you think Snyder should have included it in the film? Or do you think he made the right call by removing it? Who do you think is the girl that Joker is referring to? Let me know.

Zack Snyder’s Justice League is currently streaming on HBO Max in the US. Check out our roundtable discussion on the #SnyderCut here.

Images and Videos May Be Subject To Copyright