Jinkies! An all-new digital first series will team the Dark Knight and the Mystery Inc. team. That’s right, folks, Batman & Scooby-Doo Mysteries is coming, and it’s going to be a blast!

An added benefit to this series is, if you’re a fan of traditional print comics as opposed to digital, physical books will follow two weeks after the online release!

DC’s all-ages comic book library expands with a new series of original team-up stories launching with digital chapters on Saturday, March 27! Batman & Scooby-Doo Mysteries teams the Dark Knight with Scooby-Doo and the sleuths of Mystery, Inc. (Shaggy, Velma, Daphne and Fred) for a series of 24 digital chapters – to be collected in 12 print issues available at your Local Comic Shop – fitting the Saturday-morning cartoon position in your family-friendly weekend entertainment.

In the kick-off story by Ivan Cohen and Dario Brizuela—an adventure when Batman discovers his original purple gloves have gone missing – Velma, Shaggy, and Scooby-Doo travel back in time to Batman’s Year One era to solve the case! Will this time-traveling heist have a happy ending? Batman & Scooby-Doo Mysteries #1, “Glove Story,” written by Ivan Cohen with art and cover by Dario Brizuela, begins with the first of two DC Digital First chapters on March 27 followed by a print issue collecting the same story on April 13.

To continue the Scooby-Doo team-up tradition established in over a hundred chapters of Scooby-Doo Team-Up, in the second big Batman & Scooby-Doo Mysteries story writer Sholly Fisch and artist Randy Elliott have Scooby-Doo and Batman team up to solve the mystery of a ghost…who’s haunting the Batcave! Even if the ghost turns out to be a fake, that still doesn’t solve the real mystery: How did someone get into the Batcave to stage the phony phantom – and does that mean Batman’s enemies have cracked the secret of his true identity?! Batman & Scooby-Doo Mysteries #2, “Going Bats,” written by Sholly Fisch with art and cover by Randy Elliott, arrives in print on May 11 after digital chapters beginning on April 24.

Here’s a sneak peek at the clean artwork for the cover of Batman & Scooby-Doo Mysteries issue #1, by Dario Brizuela and Franco Riesco: 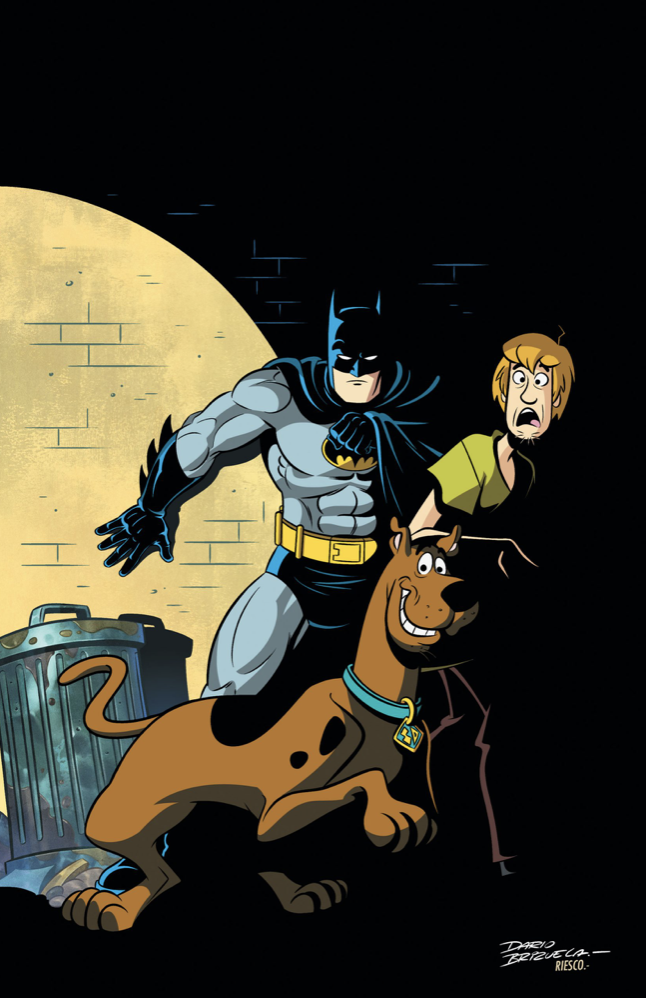 Of course, this new series is just one in a long line of adventures that Batman has shared over the decades with Scoob, Shaggy, Velma, Fed and Daphne. The first was all the way back in 1972, in Scooby-Doo Meets Batman. This animated release, which many believe to be a movie, is actually made up of two episodes of the 1972 television show, The New Scooby-Doo Movies, rather than one feature-length film; The Dynamic Scooby-Doo Affair (September 1972) and the follow-up episode, The Caped Crusader Caper (December 1972). They both feature Mystery Inc., along with Batman and Robin battling the Joker and Penguin.

These legendary heroes teamed up again on screen in 2018 in Scooby-Doo! & Batman: The Brave and the Bold, a 2018 animated direct-to-video superhero, action, comedy.

For more information on Batman, Scooby-Doo, phony phantoms, or the World’s Greatest Super Heroes, visit http://www.dccomics.com, and follow on social media at @DCComics and @thedcnation.