A few weeks back, Zack Snyder shared a quick update on the #SnyderCut via Vero, sharing a photo of a giant editing bay. The photo confirmed that editing on his cut of Justice League had begun. It seems that Snyder has been working pretty feverishly through the holidays, because he just provided a new update. The filmmaker took to Vero to confirm to a fan that the #SnyderCut is “99%” complete.

On New Year’s Eve, Zack Snyder began answering questions from fans on Vero. One eager fan directly asked the man how much of the cut had been completed, to which Snyder replied with a very succinct “99%.”

If you need proof, take a look at the screenshot below: 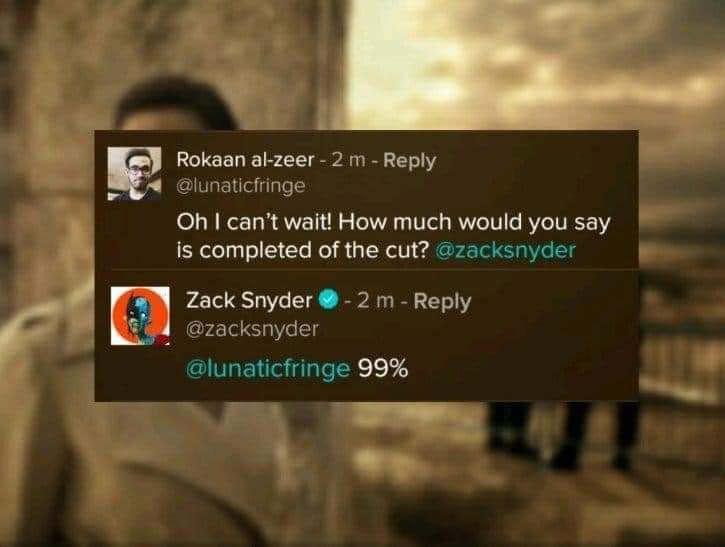 It’s crazy to think that, considering reshoots took place as recently as October and post-production was still in progress in early December, that he’s practically done. Ever since the theatrical cut of JL released back in 2017, Snyder’s been very vocal about his desire to both complete his vision, and for us to see it. So it stands to reason that this man would be passionate enough to work through the holidays. So just 3 weeks after entering post-production, the #SnyderCut is 99% complete. Awesome.

At the same time, Zack couldn’t let New Year’s Eve pass without a tease for the #SnyderCut. Using a more mainstream social media platform, Snyder Tweeted out a photo of Wonder Woman.

A beautifully composed shot of Gal Gadot in the foreground and sunlit sky in the back. It could be a behind-the-scenes photo of Gadot with crewmates hanging out in the background (or this is a similar situation to Jeans Guy from The Mandalorian). Though considering Gadot’s intense expression, I’m pretty sure this is a scene from the #SnyderCut. My theory is that this takes place right before WW enters the ruins, where she learns the story of Darkseid. It looks like the ruins that she explores have been turned into a public attraction with the barricades and the security personnel in the background.

Are you excited for the #SnyderCut? Is this event being too overhyped? Let me know.

James Gunn Confirms ‘The Suicide Squad’ Will Be Rated R