Since its announcement earlier this year, Zack Snyder has been hard at work realizing his true vision for Justice League. At first, he started sifting through existing footage. Then, additional filming took place in October with Batfleck, Gal Gadot, and Ray Fisher. Now it seems, it’s in its final stages. Though not tethered to any release date, it seems they are pushing to get this in front of HBO Max subscribers by early 2021 as promised. The proof? Zack Snyder posted a new behind-the-scenes photo as he begins editing the #SnyderCut.

Over the last few years, Zack Snyder has built up a reputation for being very active on Vero. Since the theatrical cut of Justice League, Snyder has been posting stills and behind-the-scenes shots from the #SnyderCut. And right on brand, Snyder ushers in postproduction on the #SnyderCut on Vero with a photo, as he begins editing the #SnyderCut. 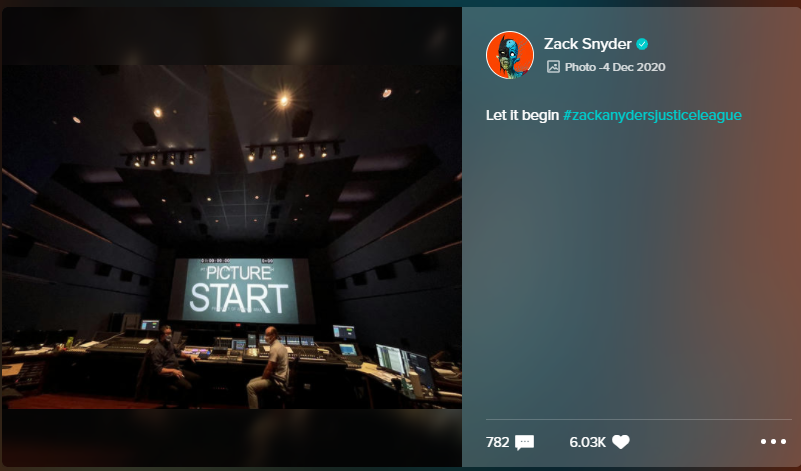 The pic shows a tech console, behind which, projected on the screen are the words, “Picture Start.” In case you’re not getting it, this is likely Snyder’s editing bay and the team that will utilize it. If the photo wasn’t enough, then the caption reading, “Let it begin,” should clue you in; reshoots are wrapped and postproduction has officially begun. That means we’re one step closer to the #SnyderCut. It’s certainly possible that reshoots are still going on, and that they’re editing concurrently, but every production is different. Either way, it’s pretty clear that editing has begun!

Are you excited for the #SnyderCut?