“Solomon Grundy Died on a Sunday” 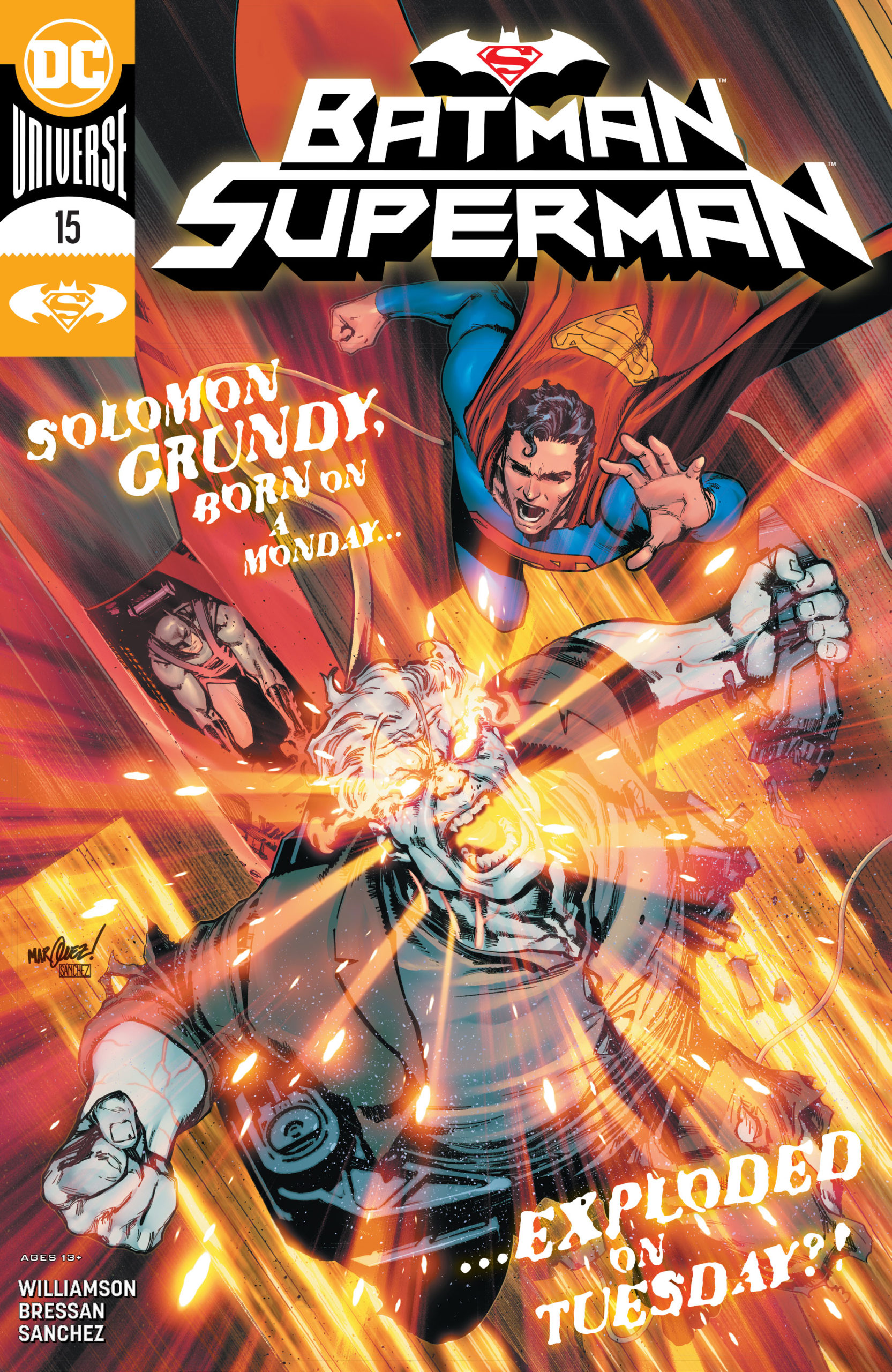 Solomon Grundy becomes a ticking-time-bomb, as the World’s Finest team rushes to save America from a massive explosion, in this week’s Batman/Superman #15.

Grundy may have been born on a Monday, but in Batman/Superman #15 he’s about to go boom on a Sunday. In the opening pages of the issue, writer Joshua Williamson establishes that Grundy’s not only about to explode due to a bad combo of science and magic, but that he also has a mysterious connection to the Green. (For those of you who don’t know, the Green was a concept established in Alan Moore’s legendary Swamp Thing run. It’s a sort of collective unconsciousness for the Plant Kingdom, and Swamp Thing is its Avatar.) Anyway, in order to prevent Grundy from exploding, which would apparently wipe out half of North America, Batman and Superman must figure out a way to safely transport the unstable zombie from Arkham Asylum to Slaughter Swamp: the place where Solomon Grundy was first created.

However, transporting Grundy is problematic due to his volatile state. Accordingly, Superman can’t carry him, so Bruce rigs up his Bat-Plane. Another issue the superhero duo faces is the Secret Society of Villains, which want to intercept and abduct Grundy. 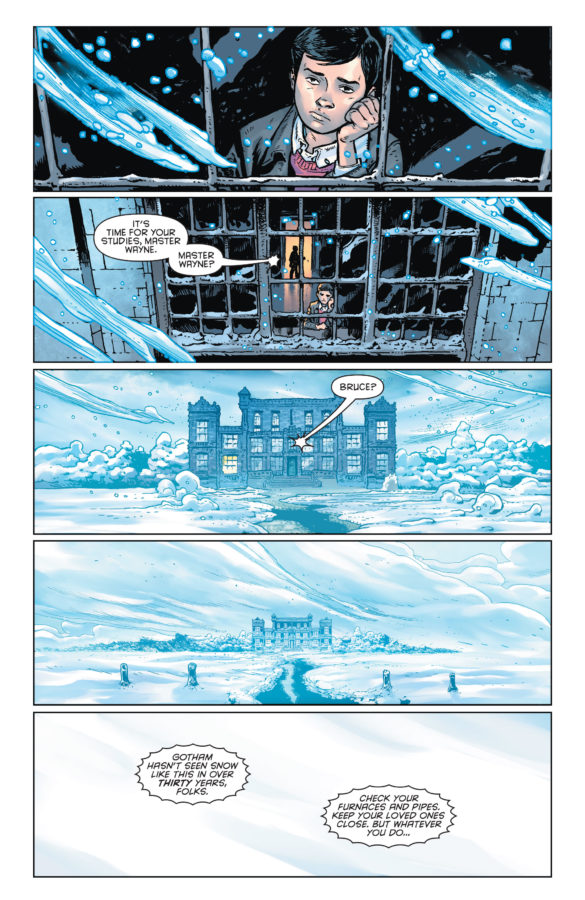 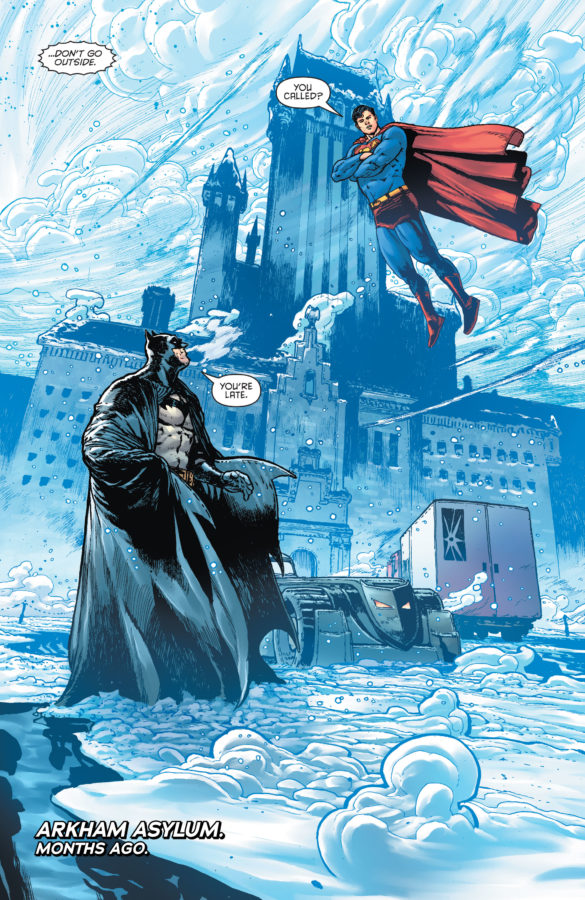 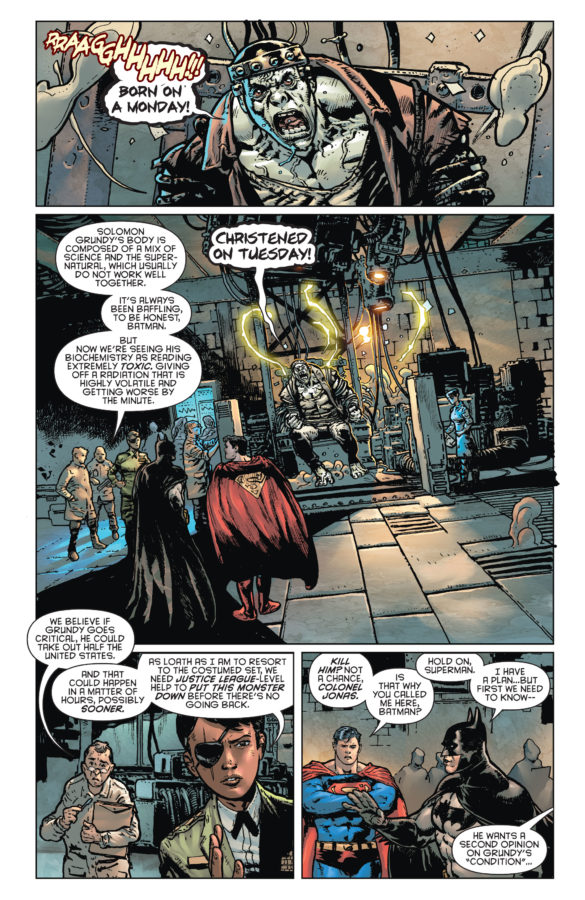 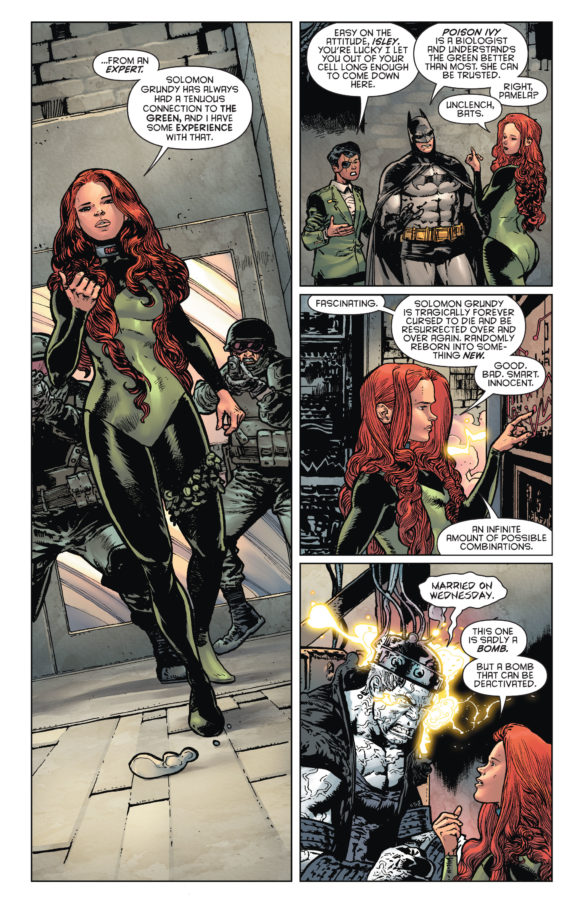 Batman/Superman #15 marks the conclusion of Joshua Williamson’s tenure on the title. In retrospect, this run wasn’t just one, single, grand story, rather Williamson opted for various, shorter arcs that explored the relationship between The Dark Knight and The Man of Steel. Batman/Superman #15 is a one-and-done story that tackles the same topic. In fact, amidst the action and bombast, this chapter’s essentially a character-driven story. Williamson sets up his theme in the early pages of the issue, and delivers a heart-warming, albeit somewhat predictable ending, that highlights the friendship between the title characters.

As Williamson rounds off his time on Batman/Superman, he teams-up with a previous partner, Andrei Bressan. Bressan and Williamson worked together on Birthright: an Image title that came out in 2014.

One of the more pleasant aspects of Williamson’s tenure has been the incredible artists that have collaborated with him. Bressan joins the ranks of David Marquez, Henry Clay, Nick Derington, and more. Each of these artists brought a unique style to the table, and Bressen’s no exception. His work has a certain grit about it, as his pencils are heavily inked, making his art very stylized. The closest point of reference I can provide, is that his work reminds me of Nick Derington. Trust me – that’s a compliment.

Bressan also has some fun with his paneling. When our heroes make it to Slaughter Swamp, the borders become wrapped in vines. Such moments where form and content collide, are fun and are the sign of a great artist. Overall, his work on this issue is great.

Williamson’s run on Batman/Superman has been a fun ride, and Batman/Superman #15 is a nice little issue that perfectly summarizes the writer’s vision of these iconic characters. Bressan’s art compliments the story, and it’s obvious from the quality of the work that these two creators have worked together in the past.

While I’m sad to see Williamson leave the title, I’m looking forward to his successor’s work: Gene Luen Yang. Yang will pick-up the title in January with the Future State event, and will continue to write the book come March after Future State ends.

Final Verdict: Like much of Williamson’s work on this title, Batman/Superman is heart-warming and fun.