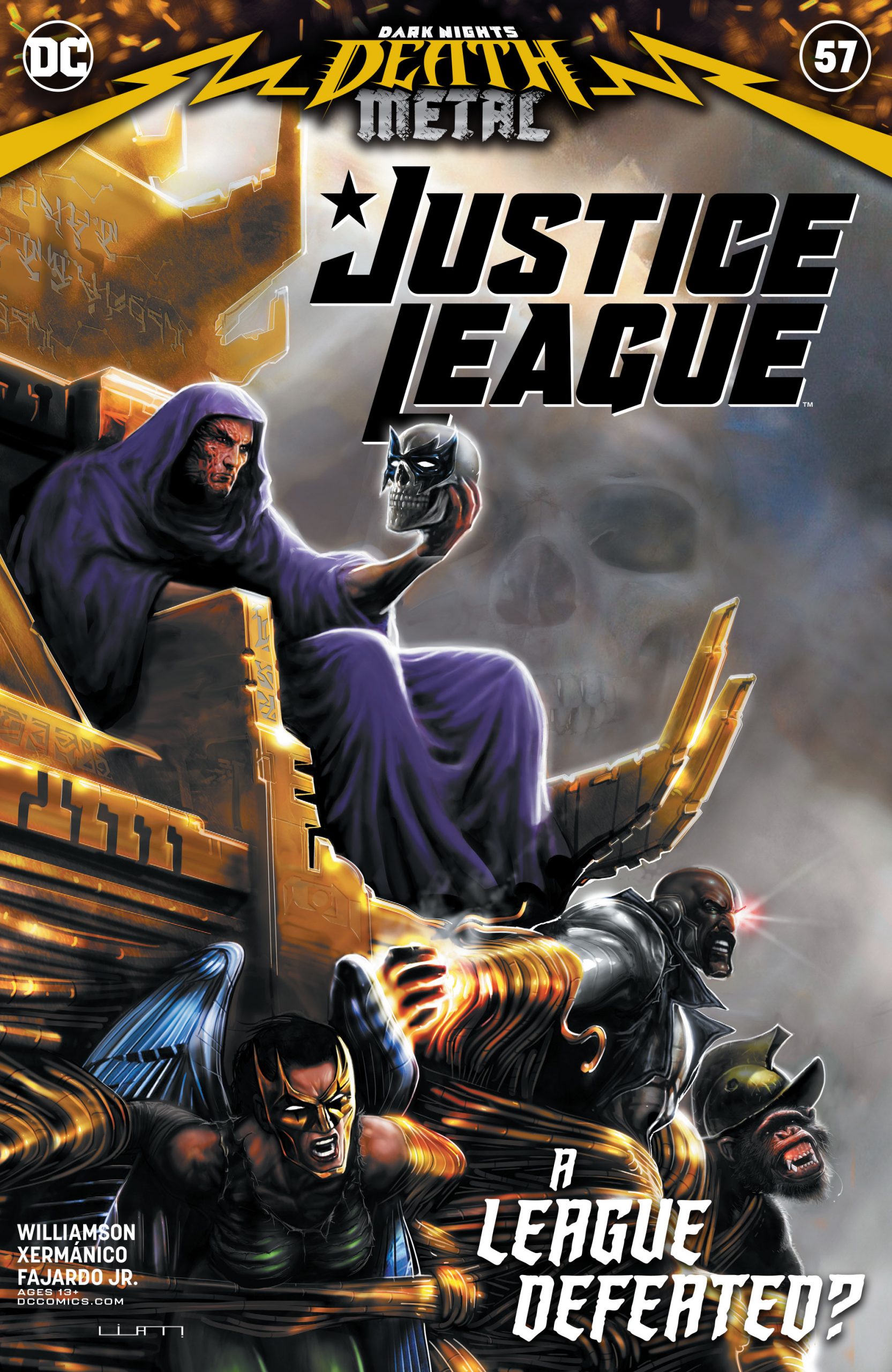 After freeing the Legion of Doom from Perpetua’s throne, Grodd, Sinestro, and Cheetah are out for blood. Specifically, they’re not particularly happy with Lex Luthor, who pretty much sacrificed them all to Perpetua. Nevertheless, after a brief skirmish, the Legion comes around as both teams find a common enemy. With the Omega Knight stomping around, it behoves the Legion to set aside their grievances in order to deal with the threat at hand.

Joshua Williamson does a great job tying up the loose ends of this arc. In fact, he might have done too good a job. While Williamson brings everything to a natural conclusion, one character’s arc, in particular, feels a bit too tidy. Without getting into specifics, I will say that in Justice League #56 Williamson delivered a powerful and emotional issue, which is somewhat undone by this week’s release. This plot point cheapens the power of the previous issue in an unfortunate way. 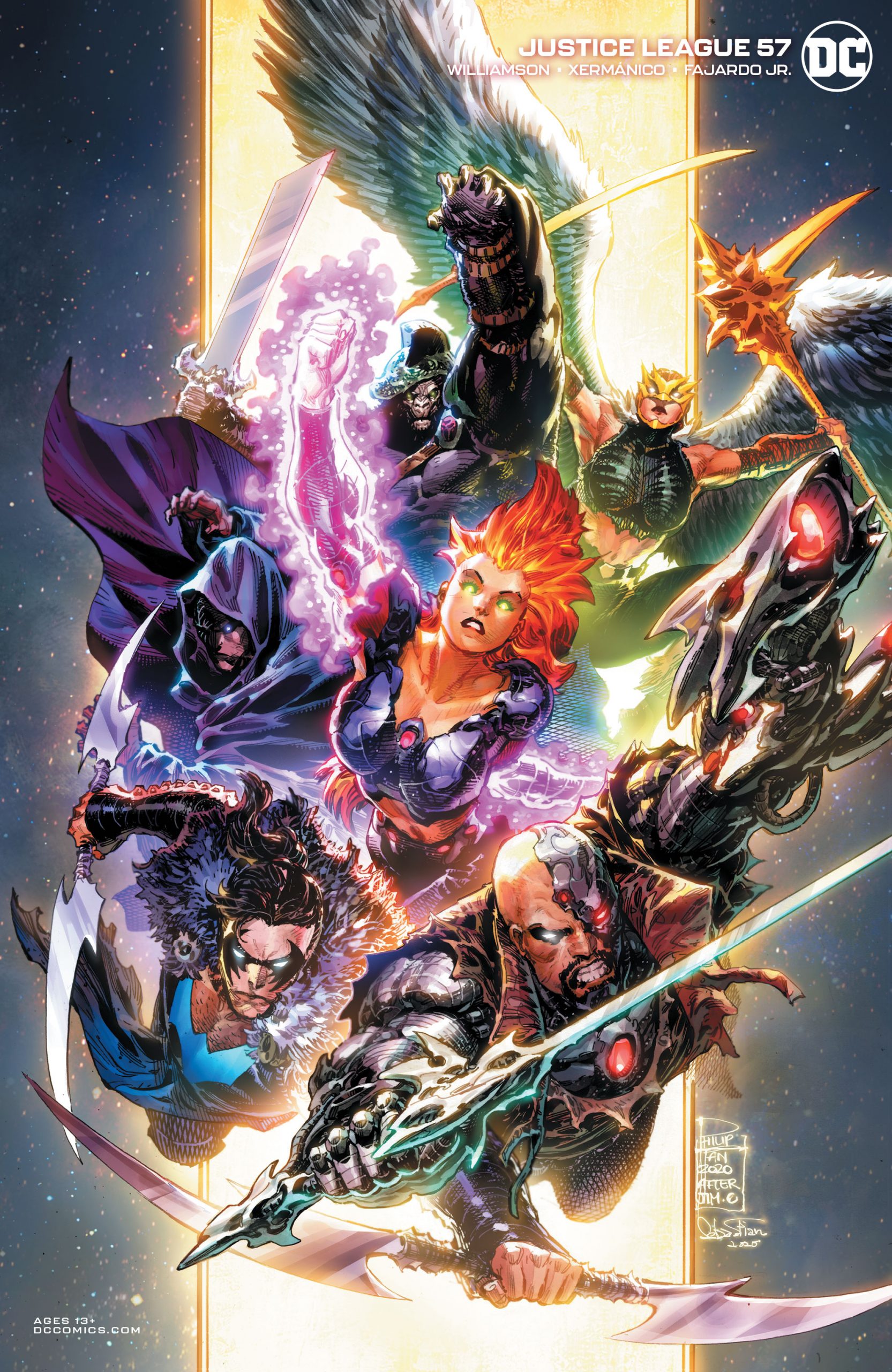 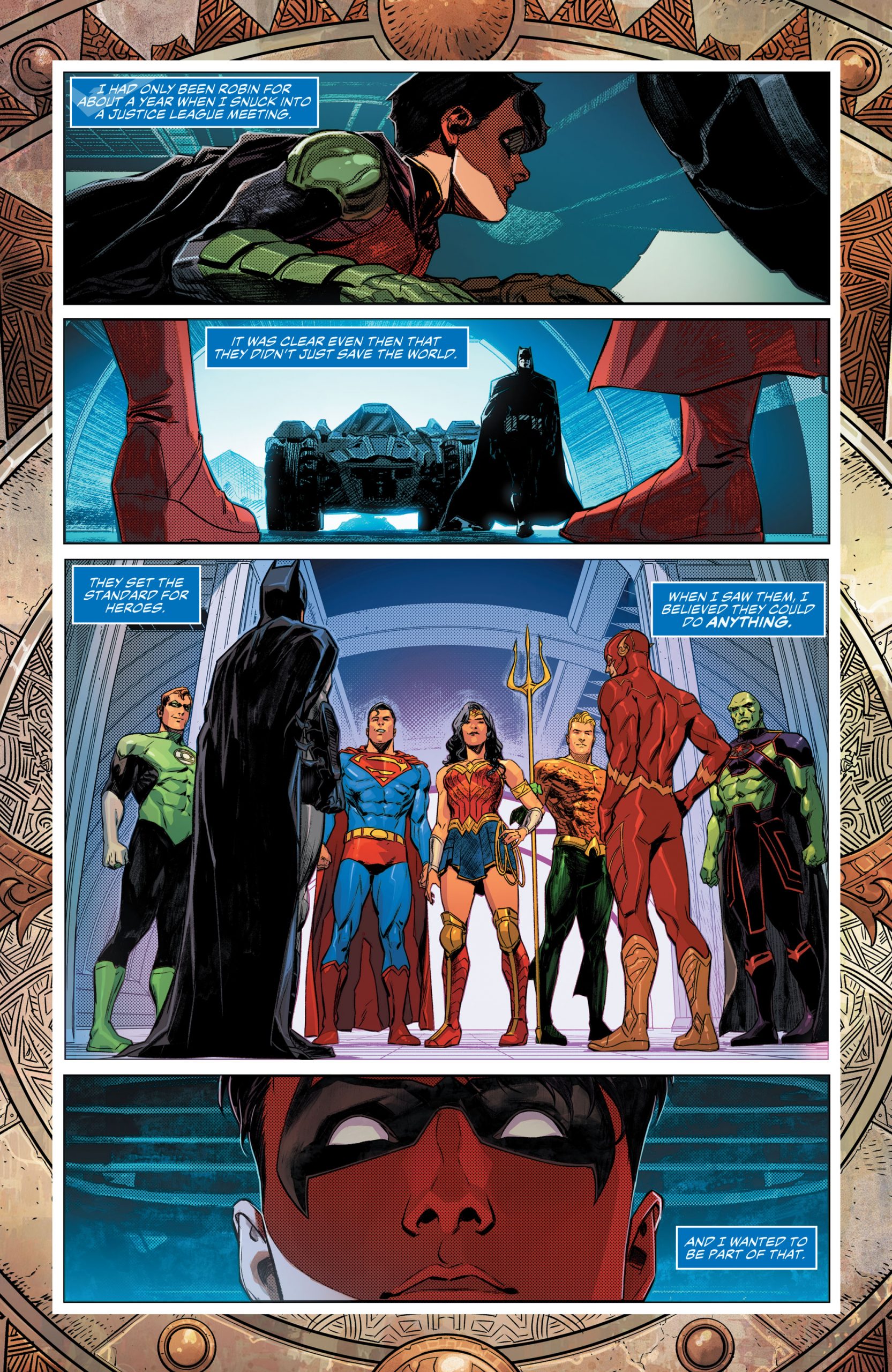 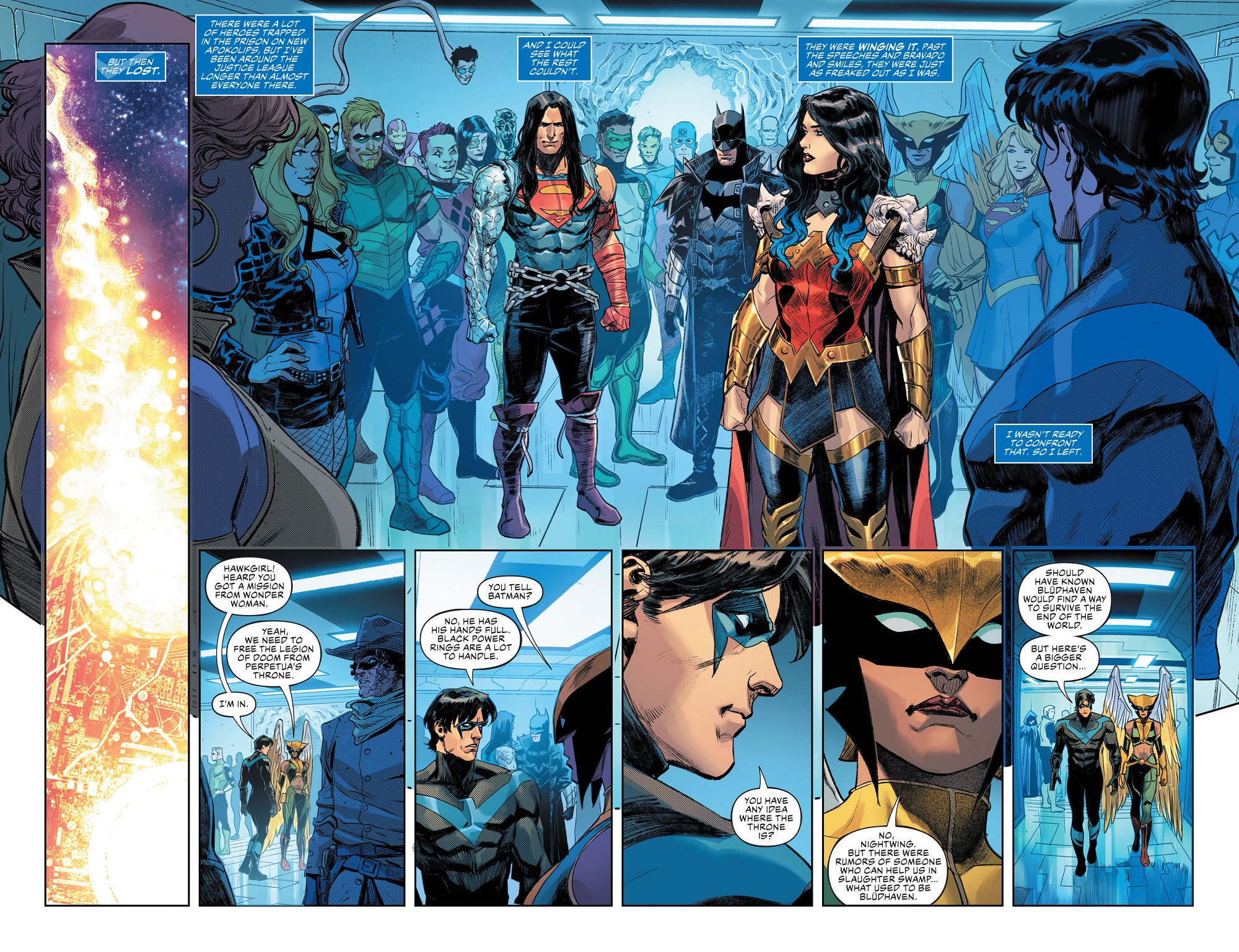 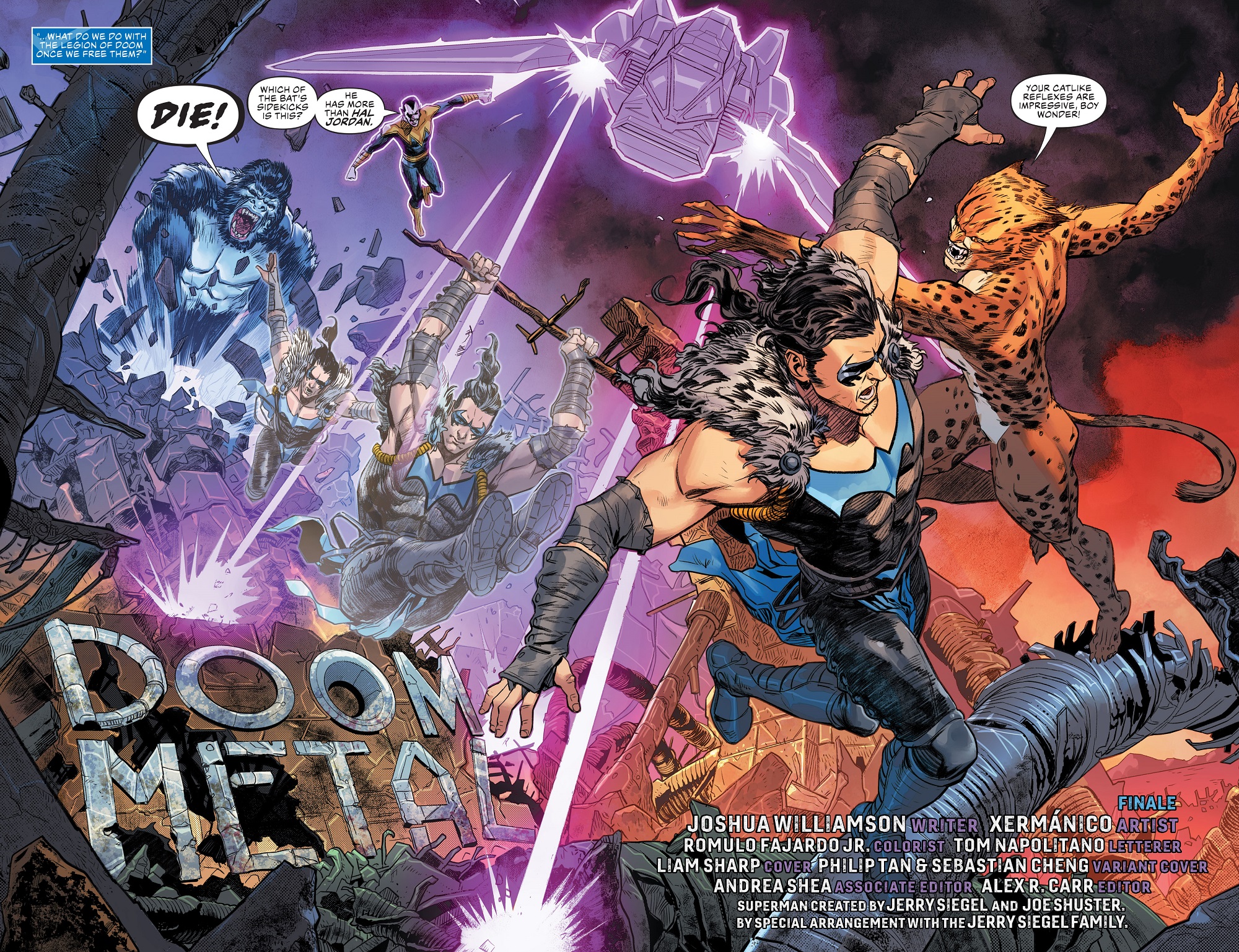 Nevertheless, Williamson does a great job tying his story directly into Death Metal #5. Justice League #57 ends where Dark Knights: Death Metal #5 begins. Williamson once again proves to be incredibly adept when writing inside continuity, as the “Doom Metal” arc feels like an essential and integral part of the larger Death Metal epic.

Picking up after Robson Rocha and Daniel Henriques, Xermanico returns to pencil duties for this issue. One of the most impressive aspects of this entire arc is how cohesive the art feels. DC did a great job tapping a number of pencilers and inkers whose styles mesh seamlessly. Honestly, had I not read the credits, I wouldn’t have noticed the change in talent.

Specifically, Xermanico brings his usual high-quality skills to the table, as Justice League #57 is, unsurprisingly, stunning. The issue is rich in detail, while handling a large cast and a sprawling landscape. Xermanico also has fun with the gutter between his panels at times, wrapping each shot on his opening pages with a wonderful border. Overall, his work is brilliant.

Final Verdict: If you’re reading Death Metal, it’s worth picking this up.